What’s remarkable about truck camper rig height measurements is how seemingly identical truck and camper combinations can have variations in height.  Small changes to a truck’s suspension set-up and camper roof top options can mean the difference between nailing that overpass, and passing through unscathed.

All this means is that you can’t just assume you know the height of your rig – unless you have physically measured it.  You also need to re-measure your rig if you change your truck, camper, suspension or roof-top options.  We recently got a thicker rubber mat and added an inch to our overall height.  When it comes to rig weight and height, everything adds up.

This week’s Question of the Week was, “What height is your loaded truck and camper?”

Heights of Hard Side Campers 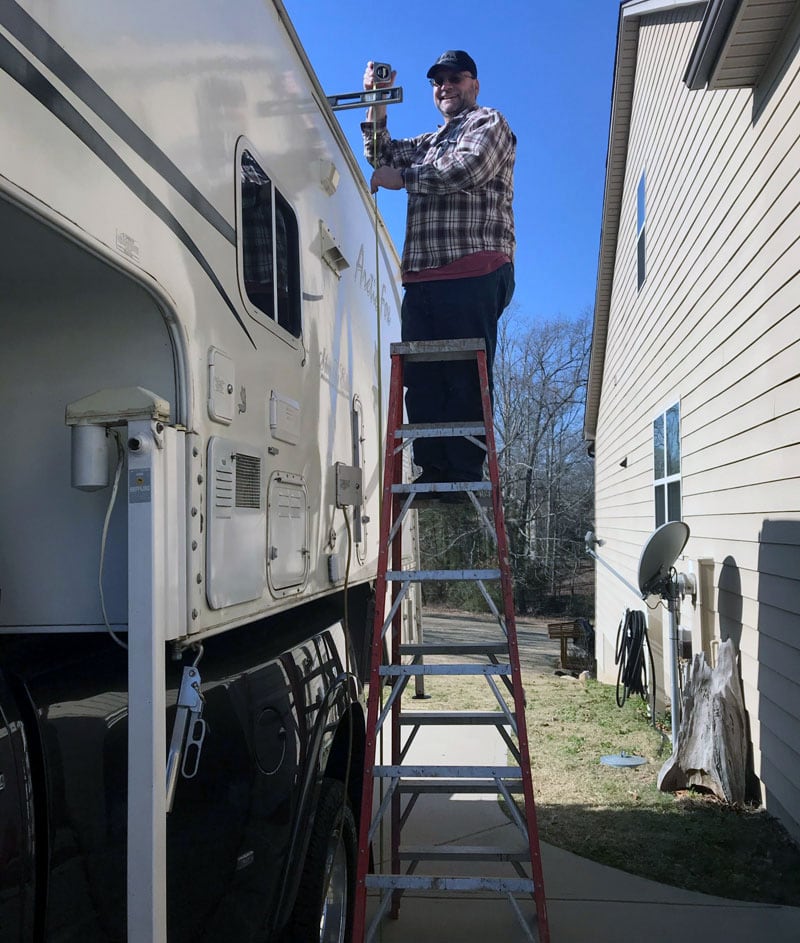 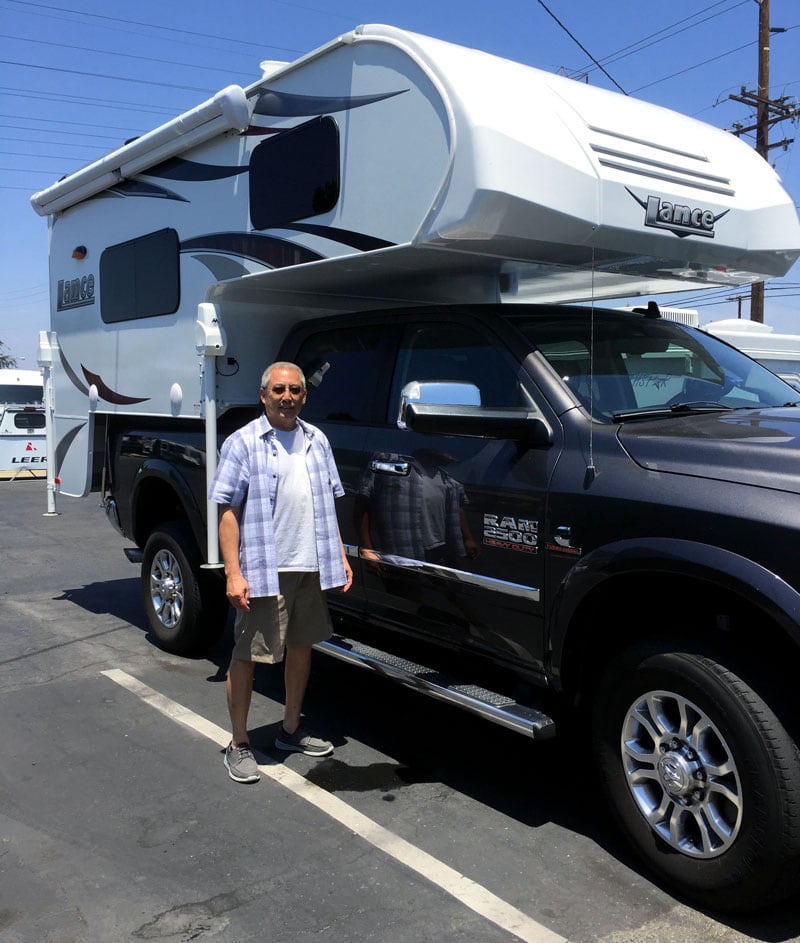 “The bridge in Durham called the Can Opener bridge has been raised to a height of 12’4”. It is still no excuse for not knowing the height of your rig, but just wanted to let you know that raised the bridge about a month or two ago.” – Brian P.

“Below is a picture of an angled low bridge where long-rig effective-height changes as they pass under. The tow vehicle begins to rise before the trailer wheels have made it through. The picture is of Boston Street in Baltimore, Maryland eastbound just before I-95. Westbound is even lower. Visitors headed to Canton are always getting a nasty surprise, as do many, many tractor trailers that travel there every day.” – James Coffman 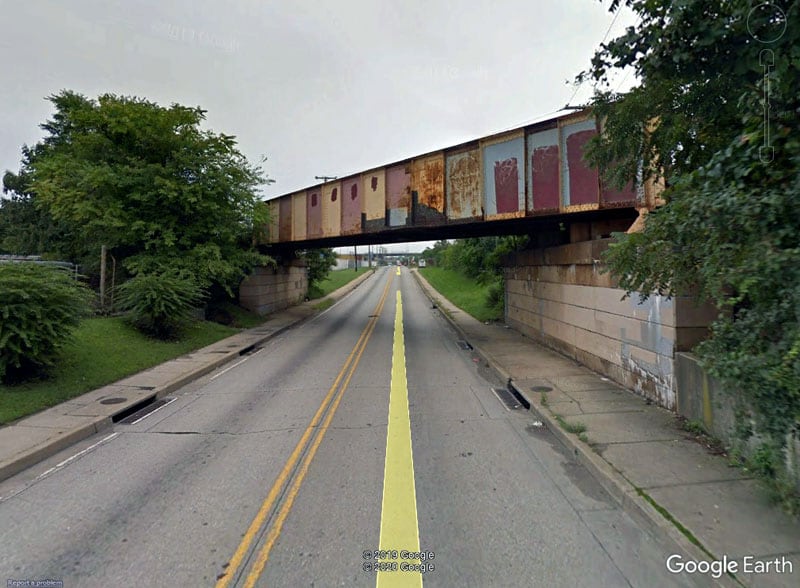 “This Boston Street railroad bridge is insidious for several reasons, and it probably eats or scars at least one vehicle a week.

The major problem is that the road is actually higher on both sides of the approach (difficult to grasp in the Google Earth fisheye perspective), so an especially long rig (sleeper cab and max length trailer, 5th wheel toy hauler on a crew cab, etc.) can end up getting skinned, or worse.

At other less traveled locations, we have encountered several unmarked and extremely low railroad underpasses where even our 8’6″ height had us guessing. After one such outing I finally remembered when I got home to get out my old surveying rod, like the one used at the event that your article highlighted.

Harbor Freight sells a plastic one that telescopes pretty cheap that’s worth stashing behind a seat or wherever it can be kept handy.

Now, when I come across any unmarked passes I can pull over BEFORE entering and walk up to it with my extendable stick and get a reasonable measure before it’s too late.

I still leave 6-inches to allow for the odd roadbed irregularity and angle of approach. Even towing our trailer, that’s still a pretty short length relative to most 5th wheel toy haulers. 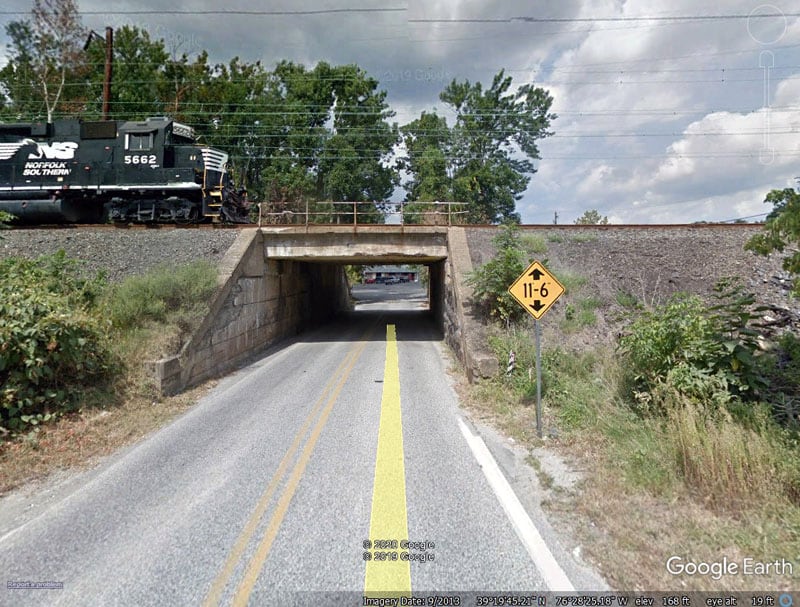 The Golden Ring Road underpass is noteworthy more for the fact that it lies on one of the approaches to a well known heavy rig towing company that is also a state vehicle inspection station and truck repair facility.

Night-time travelers in search of a repair facility relatively close to the most heavily traveled interstate on the east side of Baltimore might be steered that way by their GPS and happen upon it suddenly in the dark. It happens.

Another fun fact; kids in and around Baltimore have been known to make sport of removing the height warning signs, and there’s a trailer repair company right up the street from the Boston Street hazard that people were sure for years was complicit in that sign regularly disappearing – just for the business that it brought them.

I travel the back roads and bye ways of the rural Mid-Atlantic region pretty regularly. The most common hazard in this regard that I’ve seen (and this includes a surprising number of unmarked low passes, most of which I can’t find on Google Earth Street View at present) involve railroad crossings.

Word to the wise; when trip planning or looking for detours (usually how I encounter them for the first time) give a cursory check of a map or Google Earth satellite views for any railroad right-of-ways in the neighborhood. Their long straight nature makes them easy to pick out quickly, so it’s not really as complicated as it may sound.” – Jamie C.

“How can one person safely measure the clearance height of a truck camper when loaded? Here’s what I did. 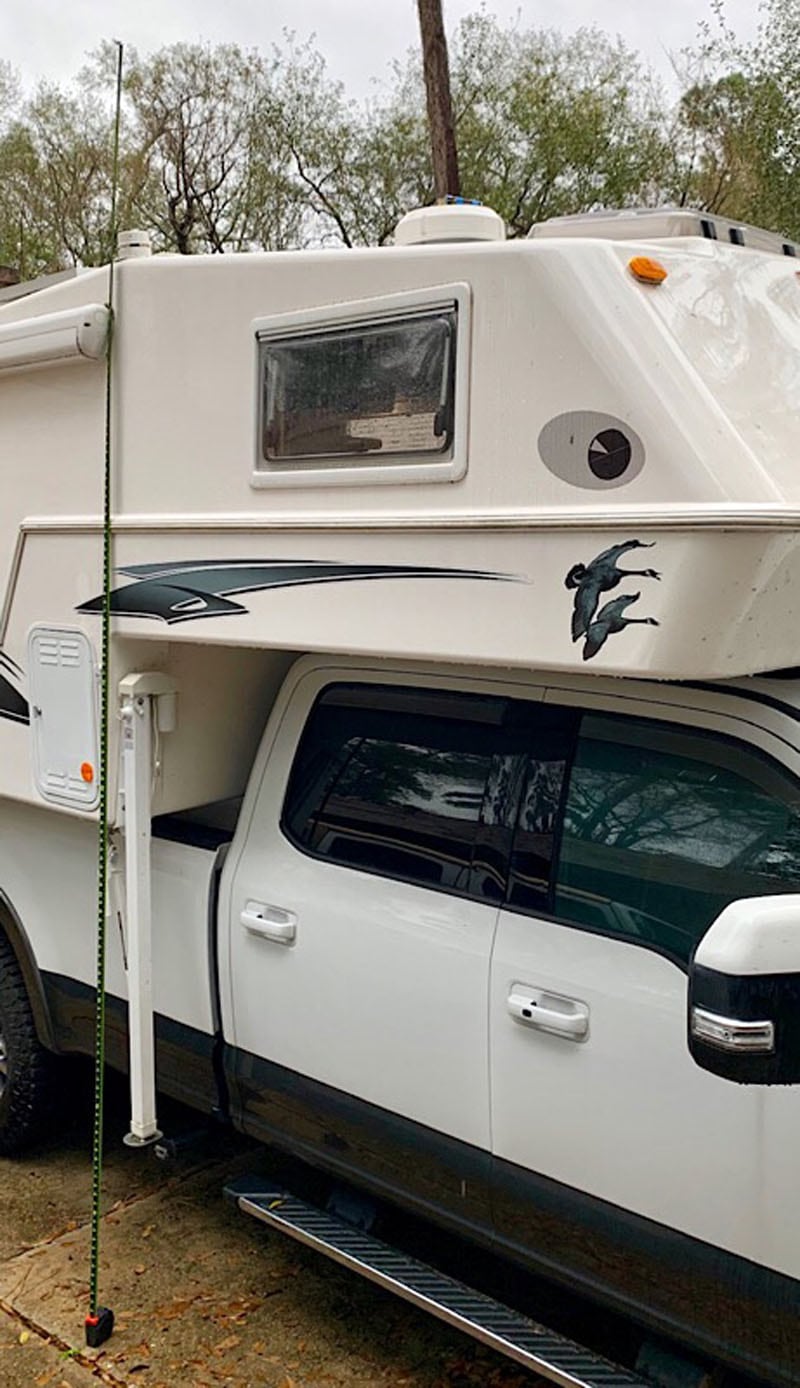 First, I extended tape measure to 12-feet.  Then I placed it on the ground beside my truck camper, extension of tape up.

Then I placed a level and aligned the laser pointer assembly on highest point of the truck camper and adjusted the position it until was level.

Then I pointed the laser at the measuring tape.

That’s how I took the reading.

The popsicle stick was used as a beam alignment wedge.  This is to keep the beam at the same height over distance.” – Bill and Kira Jones