Jim Bursen retired at age fifty and hit the road to freedom.  That was 1991.  Now in his second Alaskan Camper, Jim’s still having fun, twenty-three years later.

WARNING: If you’re reading this article at work, stop immediately.  We do not want to be responsible for your sudden irresistible urge to run out of the office shouting, “I’m outta here!  I quit!  I retire!”  Besides, you’ve had these thoughts for years now.  Don’t blame us, we’re just a magazine.

Jim Bursen did something in 1991 that most people don’t even dare to think about.  At age fifty, Jim retired from a good job with security and benefits and dared to retire.  Was Jim courageous, or crazy?  According to Jim, many said he was mad, but he was undeterred.  The open road, and its endless possibilities, beaconed. 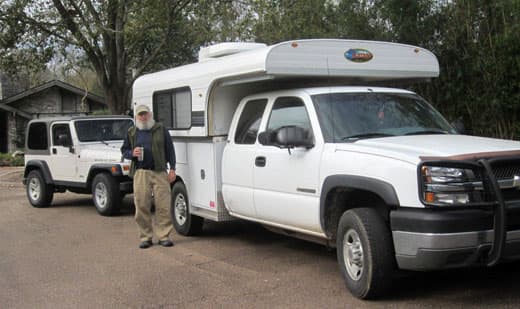 Jim: I retired from working at the university when I turned fifty in 1991.  I was a trumpet teacher for twenty-one years.  They gave me the name of the “mad professor” because I gave up my tenure and health insurance.

Jim: I don’t regret retiring at all.  Most people are afraid because they think they’re going to be bored or go broke.  If you’re in a position to retire and hit the road, you’ll never be bored.  I was in the service for four years, played trumpet professionally, and then taught for twenty-one years.  I am on my 23rd year of retirement and I am still not bored, and I get by just fine.  I think retiring to a truck camper is a great idea because you’re like a turtle, with your house on your back.

When I retired, I sold all my horns or gave them to students.  I played in orchestras for thirty years.  When you professionally play, you don’t play for fun.  I still go to a lot of live recitals and am very interested in Jazz.  When you are traveling there are all kinds of festivals in the summertime.  With the internet now, I am connected all the time and seek out music recitals and festivals.

TCM: Did you start out with a truck camper?

Jim: In 1967, I started traveling with a Dodge camper van.  Then, in 1995, I bought my first Alaskan camper and had it for seventeen years.

TCM: You had your first Alaskan Camper for seventeen years?

I later called Alaskan Campers from my home in Indiana.  At the time, Bryan’s father, Don Wheat, was coming out to visit his mom in Duluth.  Don had a used Alaskan Camper available that he drove out to me when he visited his mom.  That was April of 1995.  I really used that camper.  When it came time to get a new camper, I ordered a brand new Alaskan.  This time, from Bryan. 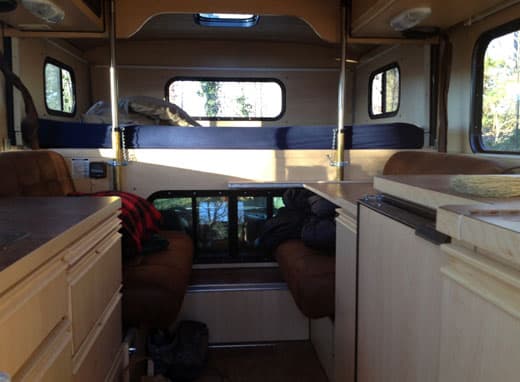 Above: The interior of Jim’s Alaskan Camper.  You can see the hydraulic lift mechanism.

TCM: Why did you buy another Alaskan?

Jim: The Alaskan is a hard side pop-up truck camper.  The roof drops eighteen inches when lowered.  There is less wind resistance and I can get into more places.  And it’s not as tippy when driving off-road.  The design suits me perfectly.

Above: Rafters on the Green River coming out of Flaming Gorge Dam at the Gates of Lodore.  Jim says this is a very nice campground with water, but no hook ups.  There is free camping on BLM land and modestly priced BLM campgrounds in the area.

TCM: What did you do after you retired?

Jim: My home base is an Amish built cottage in southern Indiana, but I’m on the road eight to ten months of the year.  When it gets cold, I go south.  When it gets warm, I go west.

We put about four groups on the river a day.  My job is to check out all their gear and get them on the river by noon.  It’s all volunteer.  They give me a place to camp and housing where I can get a shower and use the washer and dryer.  The campsite is down from Flaming Gorge about forty miles.  It’s a primitive area with bears, mountain lions, eagles, and ospreys.  It’s very secluded and beautiful. 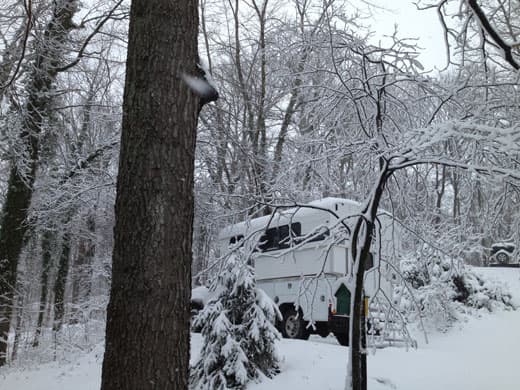 When I am traveling, I don’t drive more than two-hundred to two-hundred-and-fifty miles a day.  I stay on the map’s blue highways, and seldom drive on the interstates.  I love the little towns, and love highway 50 in Kansas.  I go that route all that time. 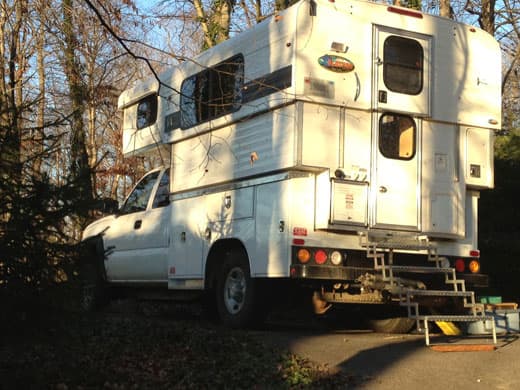 TCM: How did you get into volunteering?

Jim: I just fell into it.  I talked to the head ranger at Olympic National Park and got started.  Then, while in Escalante, I told them about volunteering at Olympic.  I just talked to people.  The ranger at Buffalo National River then became a ranger at Dinosaur National Monument, so that’s how I got that job. 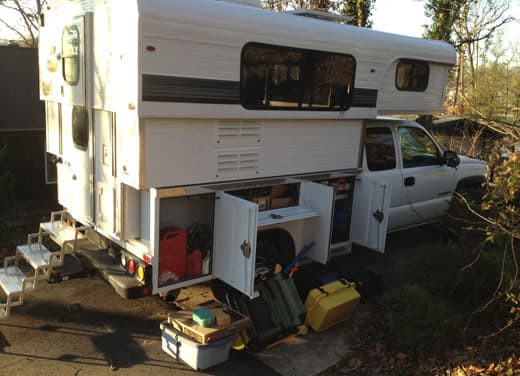 TCM: Your rig features a storage bed.  Tell us about it and what you store in there.

Jim: The storage bed holds a lot of my rafting gear, extension cords, chains, gasoline, and my home brew beer that I trade for fish, and wild game.  I also have a BBQ grill, tent, charcoal, strike anywhere matches, two batteries in series, and an electric heater.  I carry extra propane in my Jeep.  I spend a lot of time by myself in the backcountry.  I have to take more supplies.

TCM: A storage bed with beer.  Our readers are going to go nuts.  Tell us about your home brew beer.

Jim: I get home to Indiana in October and brew fifteen gallons of beer.  Then I go to Florida for a while.  When I get back, the beer is ready.  When I hit the road in the summer, I take some along with me. 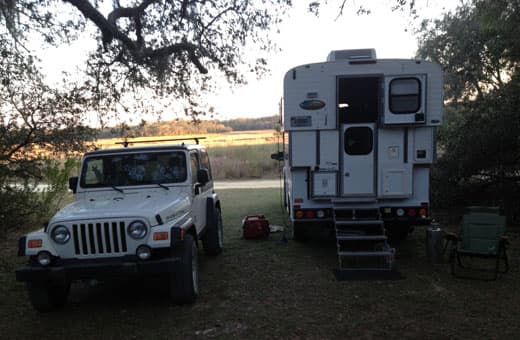 TCM: Now only if we could brew our fuel like that.  Why have a Jeep if your truck is four wheel drive?

Jim: The Jeep is also four wheel drive.  I can drop off the camper and go out in the Jeep.  The Jeep is a Rubicon heavy duty with skid plates.  It makes it easier to get around in the places I volunteer.

When I was in Monument Valley, I went on the side roads with the Jeep.  It was nice to have it.  Anywhere my camper goes, my Jeep can go. 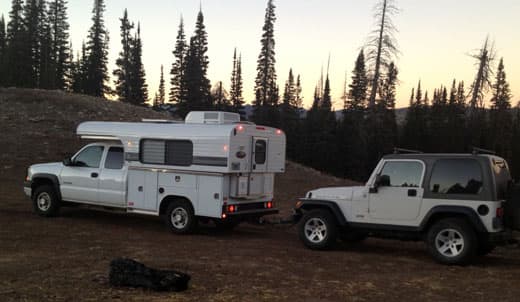 TCM: That is certainly true, but has towing a Jeep ever prevented you from going somewhere with the truck camper?

Jim: Not often, but you can’t fit everywhere when you’re towing.  Sometimes I have to get out and unhook the Jeep so I can get fuel or fit into a space.  On forest service roads I have had the camper rig get stuck and used the Jeep to pull it out.  I try not to put myself in those situations as much as possible, but my GPS has taken me into places that are closed or gated. 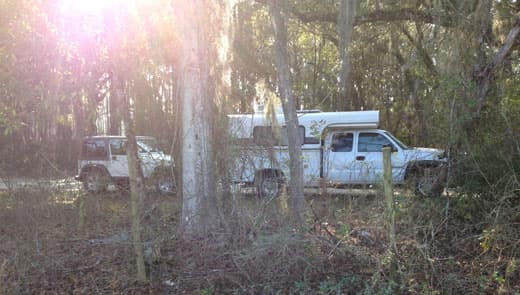 TCM: It’s funny how GPS devices, designed to help us not get lost, can send us in some strange directions.  Is there anything else you would like to add to your interview?

Jim: I have a nice place in Indiana with a lake where I can go fishing, but every day is the same there.  Every day is different on the road.  When I’m on the road, I’m not by myself.  I meet people everywhere.  I hope I can keep doing this.