In his 2003 Ram 2500 and 1990 Hallmark LaVeta, Jim McCoy tackles the remote off-road nooks and crannies of southwest Utah, and darn near eats it on a most gnarly trail!  Bogus dude!

Back in December, we asked TCM readers about their “Most Excellent 2016 Adventure”, leaving no doubt about our affinity for Bill, Ted, and Rufus.

For his report, Jim McCoy sent in a story that must be read (and seen) to fully comprehend.  Since his report was a bit longer than others, we decided to save it for a special moment in the future.  That day, my most excellent friends, is today.

A big reason I love the slide-in camper concept is how it makes my 2003 Ram 2500 modular to set-up the way I need it for a particular trip.  I did two pretty rough trips using just a topper, set up as a camper.

But dudes!  I also had two “most excellent” bodacious slide-in camper trip adventures with my 1990 Hallmark LaVeta, on my 2003 Dodge Ram 2500.  It’s so hard to choose which one to write about!

Since you are looking for ideas of places to add to a list of places to visit, maybe I can blur them into one.  Both trips were in the same greater area of southwest Utah.  It’s my favorite area to explore.  I love to revisit and get into new corners, nooks, and crannies.

So here it goes!

From my home southwest of Denver in the foothills of the Rocky Mountains, it’s a pretty easy trip over to Utah, Lake Powell, the Arizona Strip, Escalante, the Grand Staircase, Canyonlands, and Moab.

I planned two trips to the area to build off each other in further exploring “the back country”, and finally making a bucket list item of getting to and finding “The Loneliest Geocache“ in America.  This required an intense backpack trip in from a remote off-grid truck camper hide out.

After a bodacious visit and camp in Valley Of The Gods, Utah, I went to Overland Expo West in Arizona.  It was most awesome checking out all the cool rigs, gear, dudes, and dudettes there. 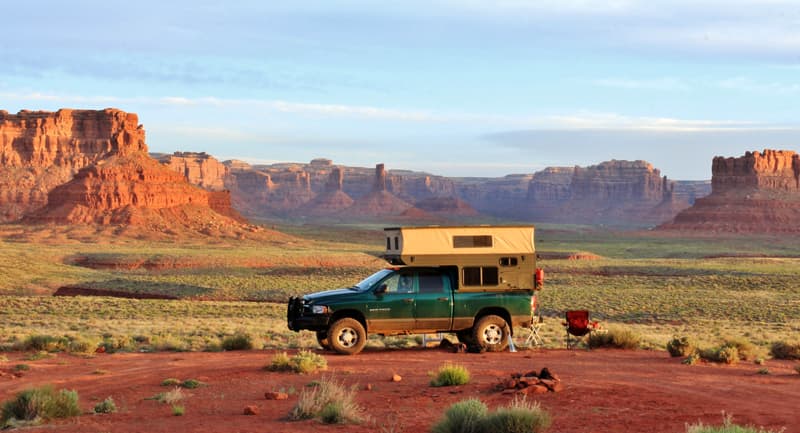 I explored the “Arizona Strip” along the north side of the Grand Canyon.  From the Arizona Strip, I departed the pavement for a 70 mile off-road jaunt to get to Escalante, Utah, crossing the Arizona/Utah state line in the back country.

I used the Vermilion Cliffs National Monument dirt road, and connected with the Cottonwood Canyon dirt road in Big Water, to get to the highway for Escalante.  Part of that route brought me through the beautiful Kodachrome Basin.  I used little spur roads to find most excellent boondock camps at night. 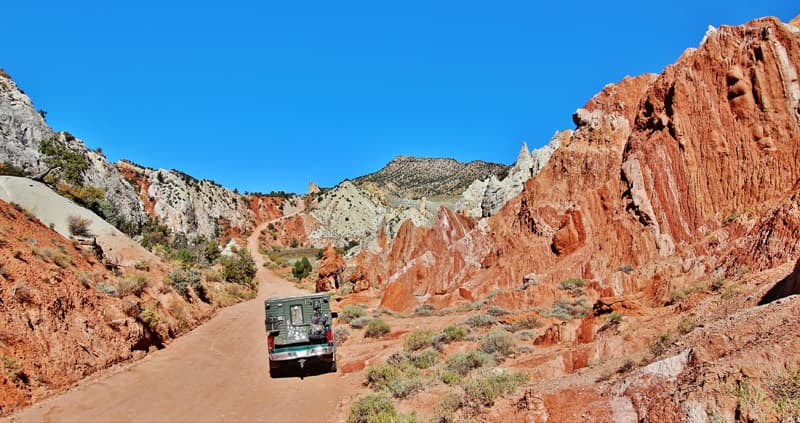 In Escalante, I had the need for some amenities to refresh myself and stayed at The Shooting Star Drive-In campground.  It has showers, internet, RV and tent sites, and a drive-in movie on the weekends.  I was there on a Saturday night and enjoyed a film.

From The Shooting Star, I supplied up in Escalante and headed down the Hole In The Rock Road, and into the Grand Staircase.  I got to a remote off-road spur to get into the foothills of the 50 Mile Bench Mountain so I could make base camp for my backpack trip to “The Loneliest Geocache”. 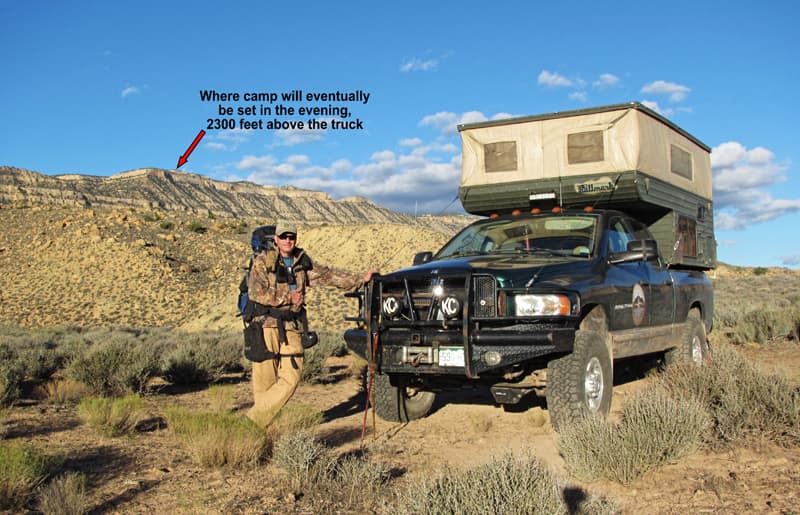 Above: Starting the backpack trip to the top of 50 Mile Mountain 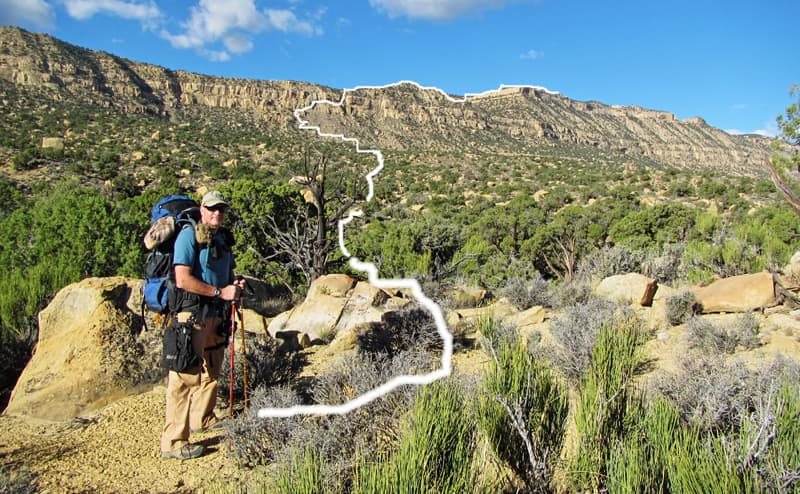 It is an arduous overnight backpack trip up onto the 50 Mile Bench to get to one of the hardest and loneliest geocaches around. 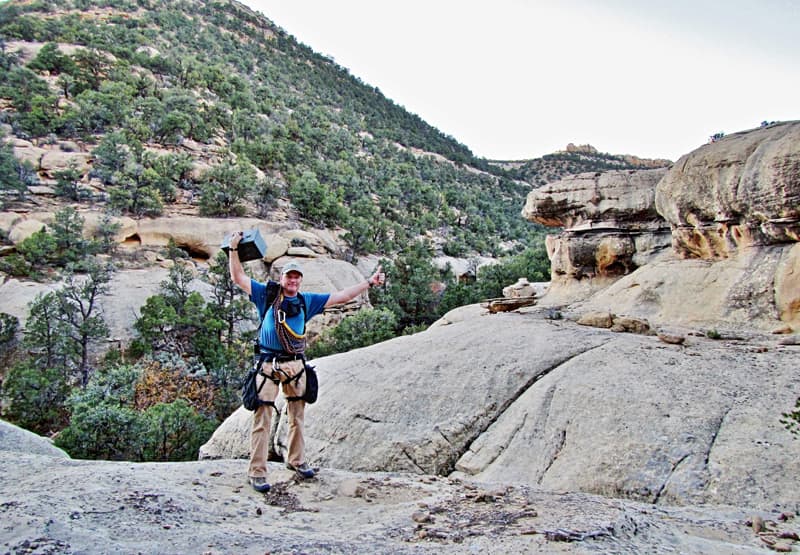 Above: Jim finding the loneliest geocach 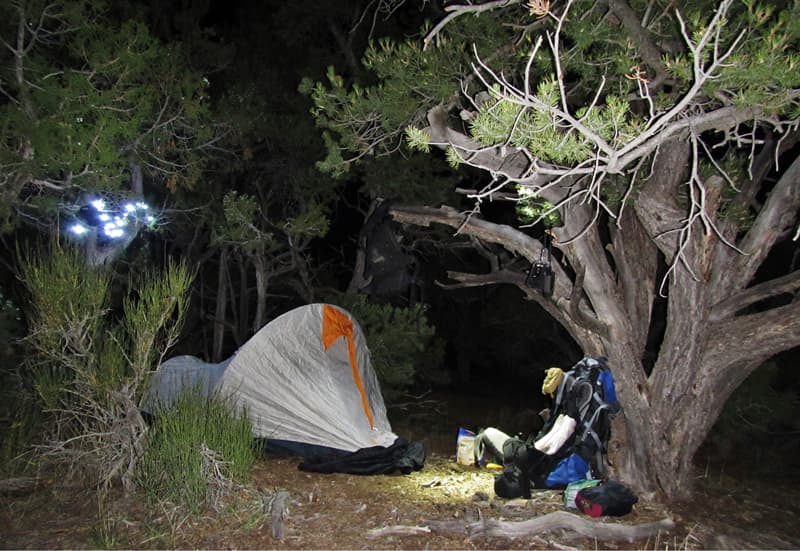 Success!  I was so glad to have steaks and cold brews at the truck camper when I finally made it off the mountain the following day. 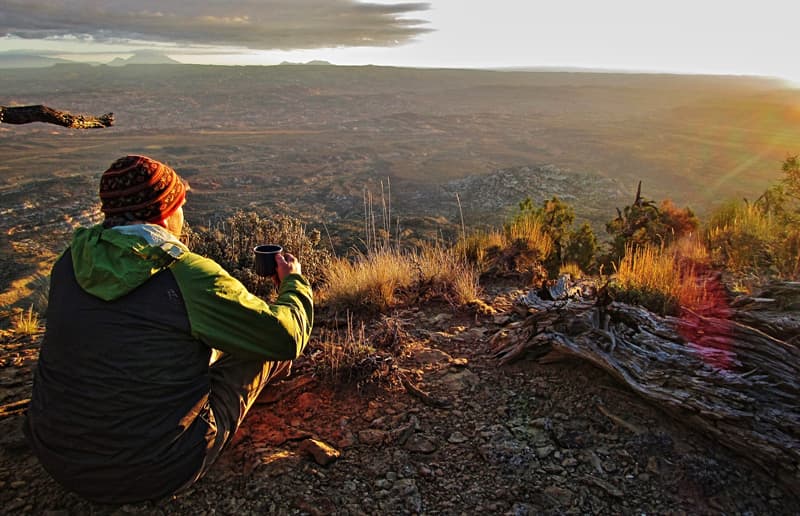 Above: Watching the sunrise 2,300 feet above the truck camper the next day!  Gnarley Dude!

From Hole In The Rock, I headed for Capital Reef National Park via Boulder, Utah.  I went on an awesome drive into red canyons via the dirt roads of the Burr Trail Switchbacks.  Then there’s an exciting drop into the lower reef country.

From that point you can go south to Bull Frog Marina at Lake Powell or, as I chose, north towards Hanksville, Utah.  All dirt roads are easy to negotiate when dry.  I did boondock on a two-track spur road in that area. 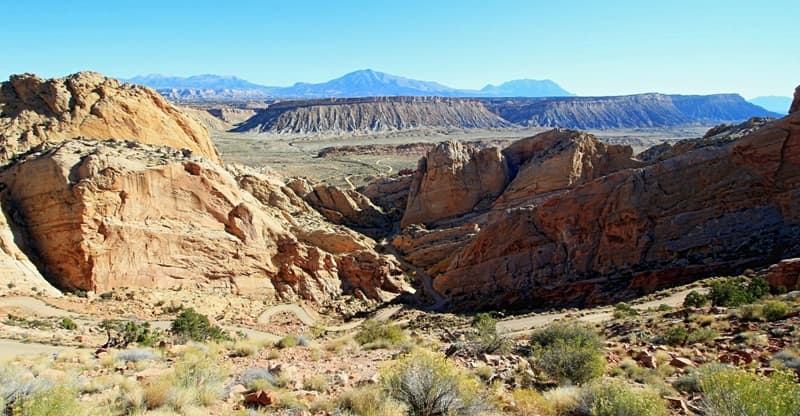 Above: The Burr Switchbacks

At Hanksville, you can head for Hite Marina at Lake Powell.  At Hite, I topped off my fuel tank, made sure my five spare gallons were good and double checked my maps.

My plan was to get to Green River, Utah traveling all off-road.  On the west side of the suspension bridge over the Colorado River, west of Hite, I headed north into the back country of Glen Canyon National Recreation Area via a dirt road.  That road eventually requires four wheel drive and low range in places.

Not having camp reservations for the National Recreation Area back country campgrounds, I found BLM lands just out of the park boundaries to boondock.  From Hite Marina, to Highway 24 via the Glen Canyon NRA, Canyonlands Maze district, Flint Trail 4×4 route, and out of the back country was 110 off road miles.  It would be longer if you skirt Horseshoe Canyon due north to Green River. 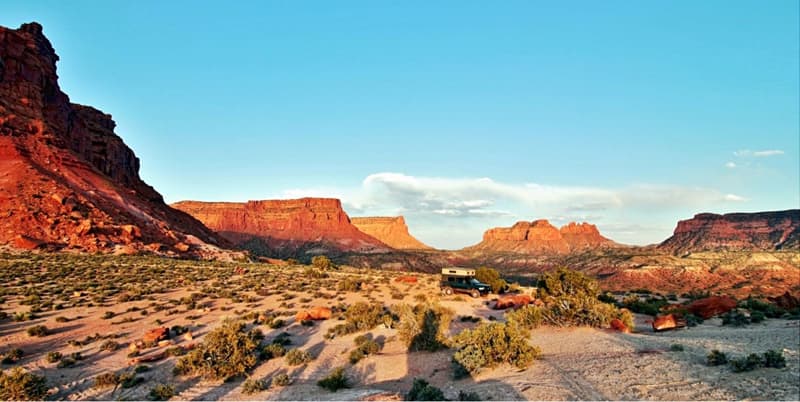 Above: BLM land via rough four wheel drive road, outside the NRA boundary.  Sunset Pass and Gunsight Butte in the distance. 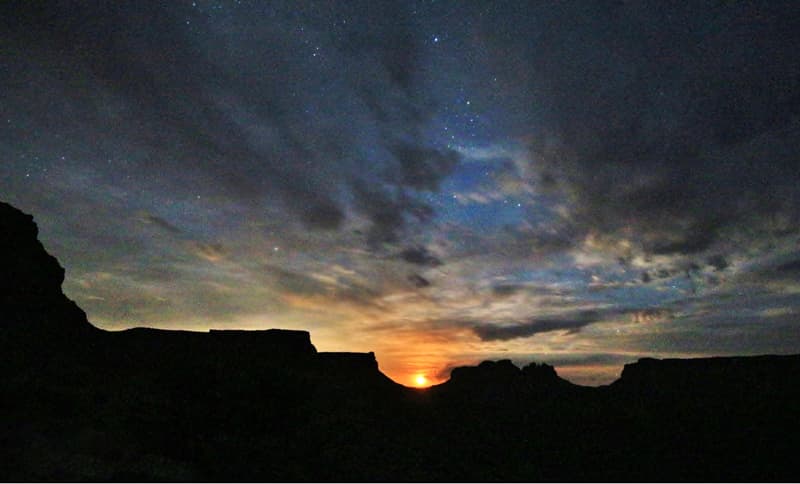 While down in those off-grid remote lands, I had one of the most harrowing moments I’ve had with the truck camper.  A trail gave way and the truck slid into a teetering near roll over predicament.  Bogus Dude!  I was sure I was in deep doo doo and it was going to be most heinous!

But… I took a break, looked at the big picture, took stock of my recovery gear, came up with an idea and plan, and managed to free myself and escape disaster by the hair of my chinny-chin-cchin.  Whoa Dude!  Most Radical! 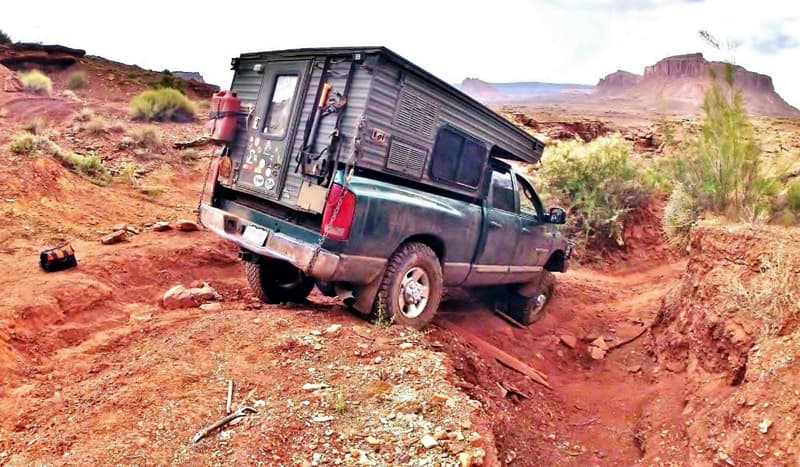 Above: My most heinous predicament

Since the truck camper couldn’t make it through that section of washed out trail, I had to backtrack from the predicament area about 20 miles.  Once back on the main routes within the National Recreation Area and National Park (which were still pretty rough), it was another day and a half out to Green River, via the infamous Flint Trail climb and switchbacks. 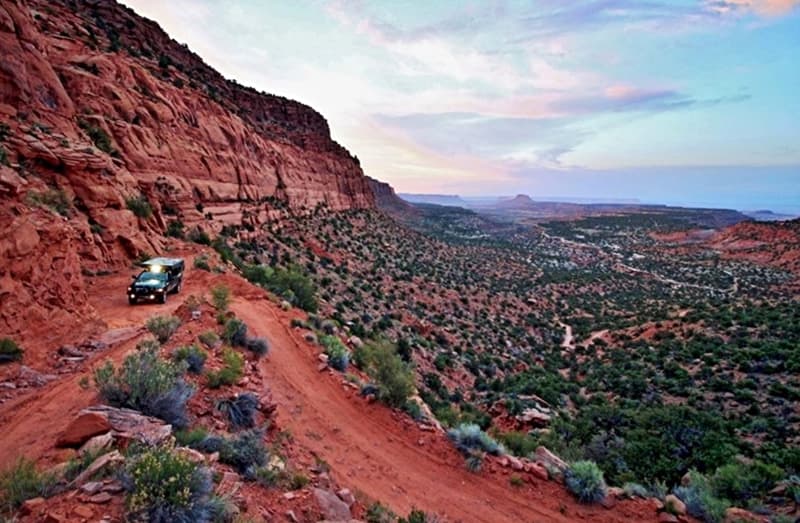 Above: Ascending the Flint Trail

Back at I-70 in Green River, I topped fuel and headed back towards Denver and home.