Nobody embodies the Go Anywhere spirit of truck camping more than Jim McCoy.  With his Ram-Hallmark rig, he pushed the four-wheel drive limits on Elephant Hill.  Don’t miss his insane video.

I started my camping last year by hitting the 2014 Overland Expo West near Flagstaff, Arizona.  There I caught up with truck camper builders I have become friends with through Truck Camper Magazine; Four Wheel Campers, Hallmark RV, and Phoenix Custom Campers.  I also ran into XP Campers and the TCM Expo West reporters for this year, D.Gorton and Jane Adams.  As always,  Overland Expo West was a blast.

After the Overland Expo, I tried a route from Big Water, Utah, to Escalante, Utah, that looked doable on the maps by a truck camper, but I wanted to recon it in my Jeep first.  If it panned out, I would take my truck camper at a later time.  It included a place along Lake Powell called Alstrom Point that I have seen other four wheel drive truck campers post photos of on the web. 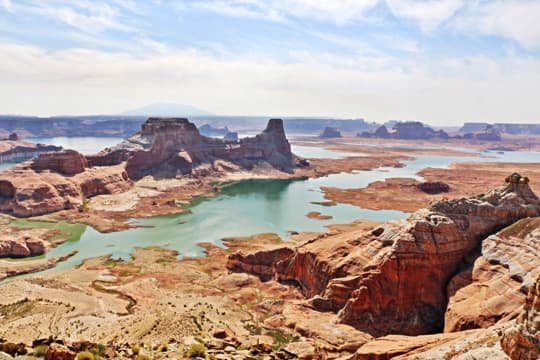 Above: At Alstrom Point, looking north over Lake Powell

From Alstrom Point, I continued following backcountry four wheel drive roads to get to Escalante.  They covered about 125 miles of scenic canyon country along Lake Powell, and then climbed up onto 50 Mile Bench and skirted a canyon wilderness area.  I spent a few days up on the bench exploring some of the canyons in the wilderness area on foot.  Continuing the four wheel drive route, I dropped back off 50 Mile Bench on its western end onto Hole In The Rock Road, and then continued northwest to Escalante. 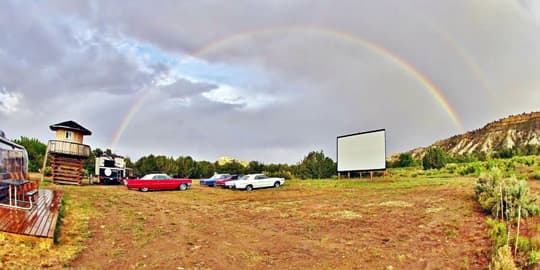 In Escalante, I discovered an incredible campground, for those that like to enjoy them.  Truck campers and all other travelers will love it!  It’s called The Shooting Star RV Resort.  This was a huge campground area that is suitable for jamborees or just finding a quiet corner.  It boasts all kinds of 1950s cars around the property as well as an old fashioned drive-in theater!  They serve refreshments from a refurbished Airstream, and you can rent a 1950s convertible to watch the movie from.  Hook ups, water, and WiFi is available.  Very friendly staff and a low key place.

I did a few local trips around my part of Colorado, but I also took my off-road truck camping to a new level this year and undertook three major trips.  They were more like big expeditions.

I had read about the Colorado Backcountry Discovery Route that a motorcycle group put together, traversing the entire state of Colorado north to south on off-road double track routes.

From what I researched, it looked like an off-road four wheel drive enthusiast truck camper could do most of it, while seeing some incredible less-traveled back roads.  I used two state atlases and highlighted all the roads comprising the route.  They were all pre-existing mapped forest routes that linked up to make the route.  I also picked up a few topograhic maps with higher detail of certain areas to make sure I had it all covered well.

With a heavy duty set up four-wheel drive truck and my lightweight Hallmark camper, I embarked on an amazing journey along Colorado’s back ways and four-wheel drive roads, from Wyoming to four corners.

I broke the adventure into two separate trips.  The first or north half of the state, covering from Wyoming to Buena Vista Colorado, taking five days.  And the second trip, or south half of the state, continuing from Buena Vista to the Four Corners area.  The southern half can be done in as little as four days, but give yourself more time to enjoy things along the way.

The north highlights were sweeping mountain and countryside vistas, and following of the Colorado Riverway for a whole day. 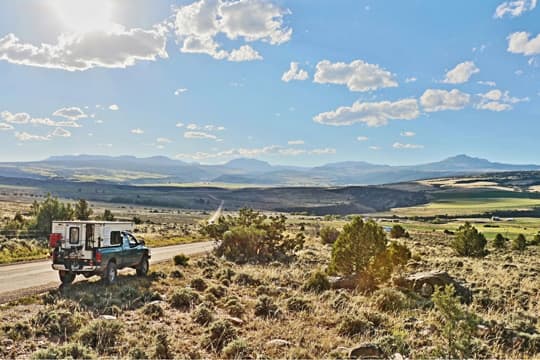 Above: A north section paralleling the Colorado River

The south highlights were more mountain vistas and four-wheel drive passes, sage country, and the incredible scenery and rugged four-wheeling through the San Juan Mountains.  The San Juan Mountain part of the trip was mostly Jeep trails, which can be challenging in a full-size truck and pop-up camper.  Squeezing my truck camper down Corkscrew Gulch literally had me on the edge of my seat! 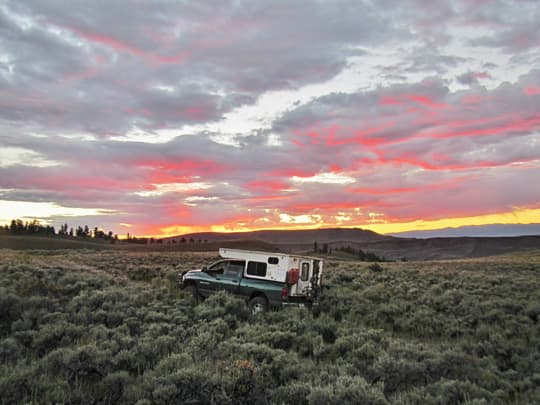 Above: Above: A south section of the Colorado Backcountry Discovery Route in Sage Country, outside of Gunnison Colorado 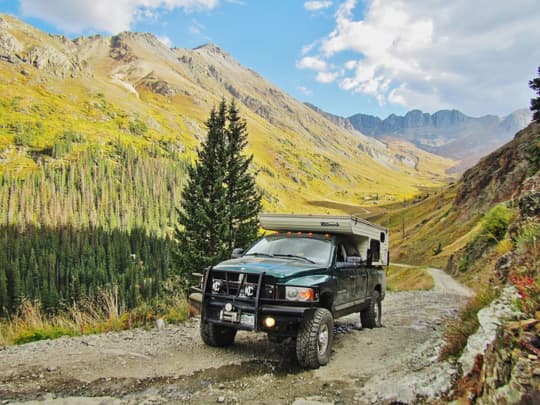 Above: Climbing the Cinnamon Pass road over American Basin, in the San Juan Mountains 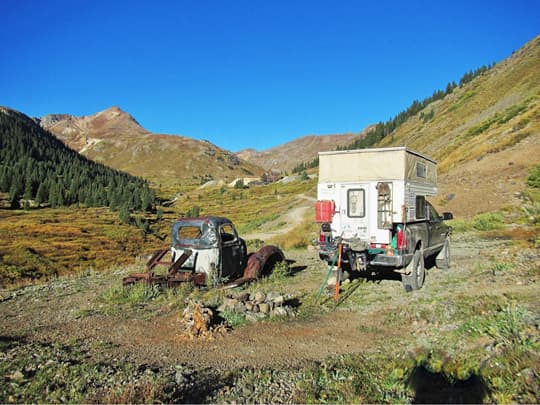 Above: Camp set near the historic ghost town of Animas Forks, along the California Gulch Trail 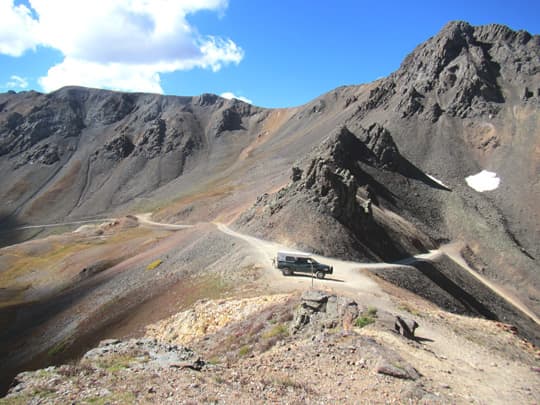 Above: The California Gulch leads to California Pass summit, which is 12,960 feet above sea level

The entire route north to south was about 600 miles of winding back ways and 4×4 roads.  Some sections are very rough and technical. But, it can be done in a lightweight truck camper with a very experienced driver.  I can’t imagine how the cross country motorcycle guys are getting through some of it.

I thought I had found my favorite route of the year with the Colorado Backcountry Discovery Route.  But, that route got my wheels turning to develop a route of my own, to go through some of my favorite places and discover new ones.  I think I outdid myself for this one, and fellow off-road truck camper, Larry Wittman, will probably agree when he hears this.

By studying state atlases and topo maps, I developed my own backcountry truck camper route from Mexican Hat, Utah, to Moab, Utah.  As the trail wiggled, it traversed 220 miles, 90% of which was dirt and four-wheel drive roads, with the 10% pavement being necessary connectors.  I took eight days to cover that terrain, taking my time to camp, explore, and enjoy certain areas along the way.

Above: In the heart of the Needles District, Utah

Some were easy dirt roads in awesome Utah backcountry, and some where demanding 4×4 roads through Beef Basin, The Needles District in Canyonlands National Park, and Lockheart Basin.  It included getting the truck camper over the infamous Elephant Hill!

In my many previous crossings of Elephant Hill, which is a single lane road, I had never met opposing traffic.  It figures that this time in my truck camper, despite beeping my horn in warning of my ascent, I came face to face with a Jeep on one of the steepest sections.  And ironically, it was a Park Service Law Enforcement Vehicle patrolling the area.  It turned out that the officer and I had a friend in common at my fire department back in the Denver area.  I managed to talk the officer into filming for me as I passed his vehicle. Small world!

I got to see some of the most remote canyon country around, as well as wild historic Anasazi ruins and dwellings, petroglyphs and pictographs.  I had some amazing solitude, and both good and bad weather.  A couple of nights I was really glad that I had the comfort of the heated camper when it dropped well below freezing and snowed.  Luckily I didn’t get snow accumulation were I was, but the mountains around me got ten inches.  It was the season’s first big snow for the Abajos and Manta La Sals over Moab.

The Lockheart Basin road (65 off-road miles from the Needles to Moab) presented a challenge when I found a 4×4 traveler’s vehicle wedged and stuck in a narrow canyon passage.  There was no way to get around him.  He also had a stalled engine and dead battery, and there was no way to stretch cables to him.  I had to dig out my camper’s deep cycle battery and hike it down to jump start him.

The two hours to unstuck him is a story in itself.   As I said, the route took eight days to do and I covered 220 miles.  I had five gallons of extra fuel but didn’t use it, chugging into Moab with still 3/8 of a tank of diesel.  I’d be glad to share the route, but please don’t attempt this unless you have the right rig, and know what you’re doing. 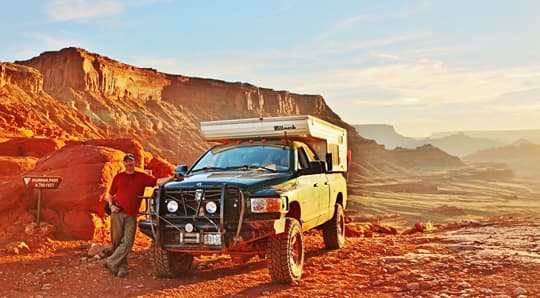 Above: Lockhart Basin at Hurrah Pass

Great Memorable Moments from the Year

I four-wheeled into the famous Crystal Mill, which is one of Colorado’s most photographed landmarks.  I was out there for two days in the pouring rain.  I’m so glad I had the camper.  Well, I was waiting and waiting for a good photo op of the mill, but all I had was rain, rain, and more rain. 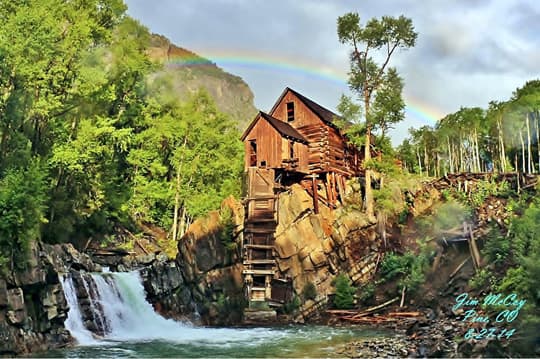 Above: The Crystal Mill

On my second day, at the end of the day, just as the sun was about to set, the sun broke through, sank into a hole in the clouds, and I got about two minutes of sun on the mill.  It was still raining at the Mill, but the sun cut through and made a rainbow over the mill.  I have never seen any photos anywhere of it with a rainbow.  Mine may be it!  It was so worth the two days there!

The other great moment was when I was along a section of the Colorado Backcountry Discovery Route on the west side of Hagerman Pass, which is a four-wheel drive pass.  I got off the main route two miles to camp at a lake I saw on the map.  It was a little work to get to it, but so worth it.  I had the lake to myself. 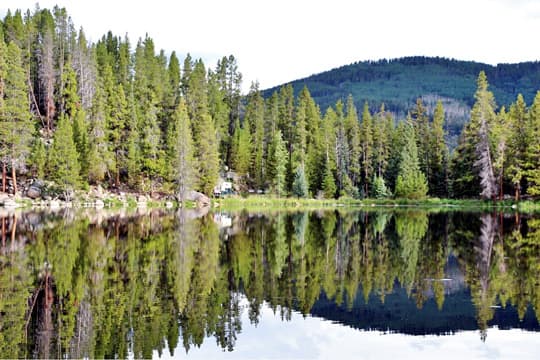 Above: The Lake off the Hagerman Pass Road

The next morning, after making a pot of camper coffee, I hiked around the lake.  I was taking photos of the camper from across the lake when I heard some noises nearby me.  I sat quiet and watched in that direction.  A mamma moose and her two calves came out of the woods a couple hundred feet from me and started feeding in the waters along the shore.  Wow!  Not a typical thing to see in Colorado.  I got to watch and take photos for forty-five minutes. 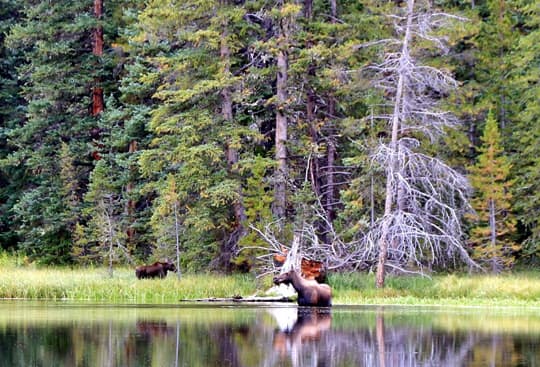 Above: Moose at the lake

If you attempt The Backcountry Discovery Routes, or any backcountry areas for that matter, be prepared!  There usually aren’t many other travelers along many of the backcountry routes.  Experience, off-road skills, and a well equipped four-wheel drive vehicle are a must.  If you are down in the Canyonlands area, off road or not, have extra fuel!  It’s easy to put on a lot of miles in those areas exploring around and go through fuel.

The Needles Outpost boasts having fuel, but it is at a king’s ransom and gasoline only.  No diesel.  And occasionally the pumps are down.  They also close the pumps for winter at the end of November and reopen in spring.

There is no cell signal for most of that area.  You will need maps.  Maybe different types and brands so what one lacks the other picks up.  You must be self sufficient.   The things that I liked most about this past year were the discovery of places I had not been to before.  Places that I said, “Wow!  I had no idea this place existed!”  And I was totally impressed to discover them, and want to go back and explore in more detail.  Some of which were hidden “in my own back yard”.