A few weeks ago, we got a phone call from Dustin Johns, President of Travel Lite, that went a little something like this:

“Gordon, I’m working on a new high-end truck camper line.  I can’t tell you too much about it yet, but you’re going to love it.  The counter tops are… well, you’re just going to have to see it at Louisville.  I can’t wait for you to see it.  I’m really excited about these new campers.”

Dustin had about as much subtlety as a kid who just discovered the candy isle at the supermarket.  Evidently, Dustin was pretty excited.

To create their new Illusion series, Travel Lite took two existing floor plans from their hard side line and upgraded everything inside and out to Dustin’s high-end standards.  Travel Lite’s time-tested design and wood frame remain the same, but everything else was challenged until Dustin felt the Illusion series was worthy of taking on the luxury truck camper marketplace.

In many ways, Dustin’s new line is going to push the boundaries of the luxury truck camper marketplace.  For starters, the Illusion series appears to offer both a stunning value, and an implementation of technology rarely if ever seen in the truck camper category.

Above: The front nose of the 2014 Travel Lite Illusion

TCM: Tell us about the concept of the Illusion series.

Dustin: I wanted to create a truck camper package that offered our customers a fully-loaded, high-end, luxury truck camper at a lower price.  With the Illusion, the only feature or option that’s not included is a propane generator.  Everything else, and I mean everything else, is included.  For the truck camper customer looking for the best bang for the buck, they just found it. 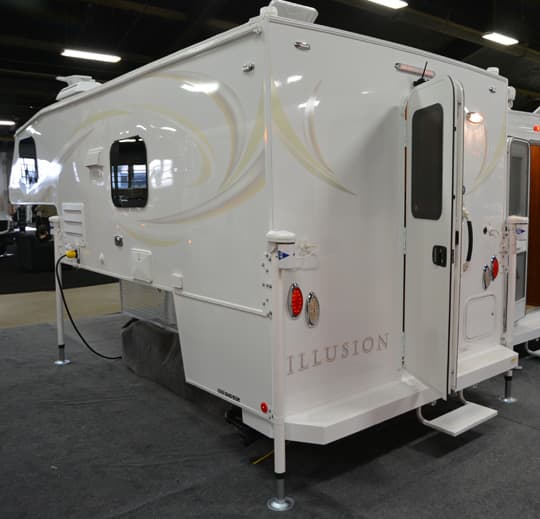 Above: The back and driver’s side of the 2014 Travel Lite Illusion

We also took a fresh approach to the exterior and interior design for the Illusion series.  Other manufacturers have been making their truck camper exteriors very dark with over-the-top bold exterior graphics.

For the Illusion we made the exterior graphics subtle and added a hint of depth and sparkle with a high-gloss molded front nose cap.  The dark-tinted frameless windows give the Illusion campers a look that is uniquely modern yet sophisticated.  We were aiming for an understated, classic exterior, and I believe we nailed it. 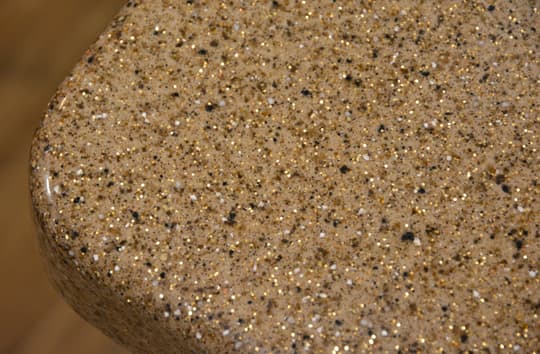 Above: Gold-flake Granicote tables and countertops are featured in the Illusion series

We didn’t stop there.  On the inside, the Illusion series features raised panel cherry cabinet doors and gold-flake custom-molded Granicote countertops and dinette tables.

Above: The drawers have steel ball bearing drawer guides

The drawers have steel ball bearing drawer guides, the standard HDTV flat panel television is a gorgeous 24” model; bigger and better than anything we’ve put in a Travel Lite before.

Above: The kitchen area of the Travel Lite 1100

Your invaluable truck camper survey told us to put in a stainless steel double sink with a high faucet. 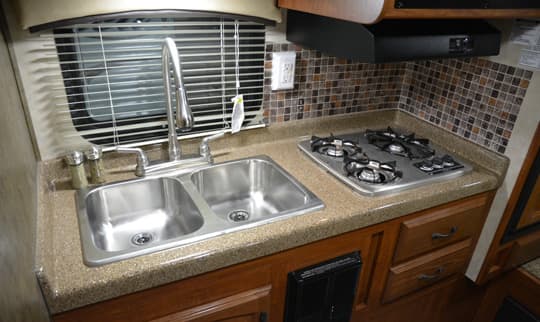 We also put in a beautiful multi-color tile backsplash that just screams high-end kitchen luxury.  We examined every material, every appliance, and every opportunity to kick the Illusion series up a notch, and then made everything but the generator standard.  That’s the Illusion series.

Above: Some new technology items include a back-up camera, an AGM battery, and a 24″ HDTV

TCM: You also seem to have loaded the Illusion with technology, some of which we haven’t seen in a truck camper before.

Dustin: I love technology and wanted to make our Illusion serious state-of-the-art.  We started with a standard back-up camera with a 7” wireless monitor.  The great thing about our system is that it’s standard, and the monitor can be brought from the truck into the camper.  It’s a great driving visibility tool, and a security device.

I already mentioned the fantastic and standard 24” HDTV, but the camper also comes with a Jack Digital HD Antenna and a Group 31 AGM battery.  I don’t believe any other hard-side truck camper comes standard with an AGM battery.  AGM’s charge faster and last longer than the usual deep cycle batteries the competitors use. 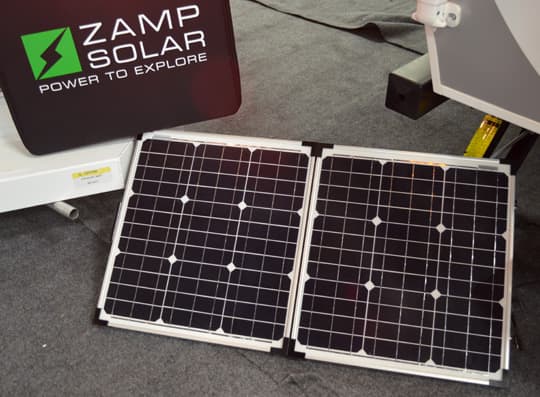 Another industry first is the standard 80-watt portable solar panel.  We believe a portable 80-watt panel is better than a larger fixed panel because you can put it in the sunlight.  A built-in digital meter tells you how much power it’s generating.  The Illusion series also comes pre-wired for a built-in propane generator, so we have power sources well covered. 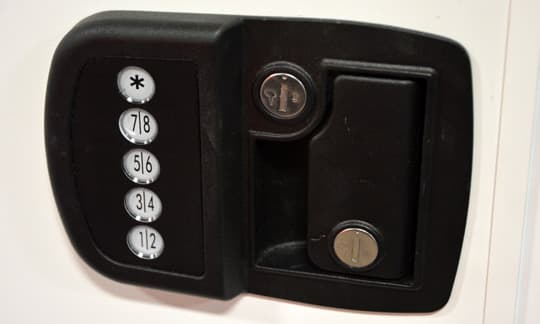 TCM: Tell us about the keyless entry door lock.

Dustin: That’s another new technology we made standard on the Illusion series.  Just punch in a code to unlock the door.  Say you’re out kayaking, and you don’t want to take your camper keys with you.  You can leave keys in your camper and put in the code.  The door also features a dead bolt.

TCM: Are the construction materials and processes the same for the Illusion series as they are on standard Travel Lite truck campers?

Dustin: We have made some updates to the construction, but we strongly believe in wood structure, hand-laid wall construction and use it for all of our products.

For the Illusion series we have added an aerospace-designed thermal foil wrap.  Essentially, it’s a dense sheet of fiberglass-meshed aluminum.  NASA has used it for some of their projects. 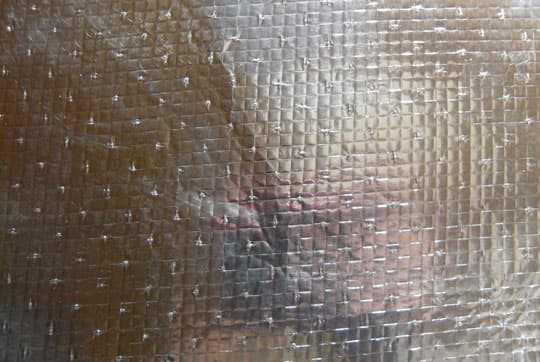 Above: The aerospace-designed thermal foil wrap is standard on the Illusion campers

TCM: And this thermal foil wrap makes a difference?

Dustin: Yes, it’s a very effective insulator.  Unfortunately, it’s also very expensive per square foot.  By layering the unit inside the ceiling and floor, you can save on air conditioning or heat and still be more comfortable.  For the Illusion series, we have applied it standard.

We also use pink residential-style insulation in the camper walls and closed-cell foam insulation under the bed and around the front pass through window.  Our approach to insulating truck campers is proven and very effective.  Now that we’ve added thermal foil wrap, I think we’re leading the industry.

TCM: To the best of our knowledge, no other truck camper manufacturer wraps their campers in thermal foil wrap.  If it doesn’t work for insulation, at least it will prevent space aliens from reading our minds as we sleep.

Above: Frameless windows are standard on Travel Lite Illusion campers

Dustin: Yes, they are.  Most of the high-end travel trailers and fifth-wheels at the Louisville show featured frameless windows.  They help give the Illusion series a subtle, upscale presence that stands out in the crowd.

The windows open and close from the bottom, like the European-style windows.  This keeps rain from coming in.  As thermal pane windows, they’re also excellent for four-season camping. 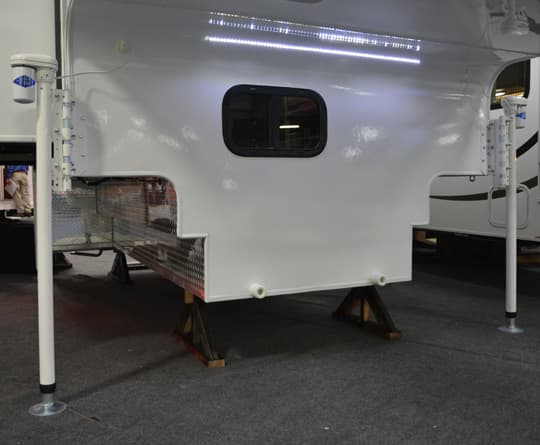 Above: The LED back-up lights are on the front wall of the Illusion campers

At Louisville, I showed you the LED loading lights under the front cabover nose.  These will help with loading a truck camper in less than full daylight.  I’ve loaded a few truck campers at night, which is what gave me this idea.

Above: Upgraded hinges are used in Travel Lite Illusion campers; the 1100 is pictured above

TCM: We talked about having an LED that is dead-center to be turned straight-ahead to give the driver a center reference.  That would be helpful even in broad daylight.

Dustin: I like that idea and I’ll see if we can make it happen.

I also should mention that the hinges on the interior cabinetry are the best of the best and give every cabinet door open and close a really solid feel.  For the Illusion series, nothing was overlooked.  Even small differences, like upgraded cabinetry hinges, can make a big difference in the day-to-day use and enjoyment of a truck camper.

We made the ceiling panels a material that’s soft to the touch.  The interior accent walls are two tone giving the camper more dimension.  The list goes on and on.

TCM: How did you come up with the name Illusion?

Dustin: Our team had many brainstorming sessions in regards to this concept.  Once I had described my vision for the unit to have a high-metallic flake front end, chrome exterior lighting, tinted frameless windows and what I refer to as “ghost graphics”, we threw around several ideas.  At one of the sessions, my wife Lindsey shouted out “Illusion”, and we all looked at each other and said, “That’s it!”. 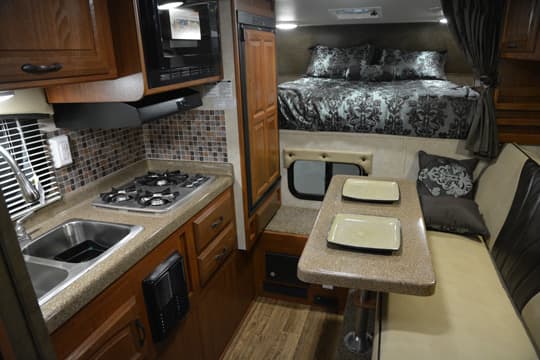 Above: The interior of the Illusion

TCM: What are the available interior fabric choices for the Illusion campers?

Dustin: I wanted a rich and classic interior look.  The leatherette we chose for the dinette seating is khaki with a chocolate trim.  The bedspreads and pillows have an elegant blue pattern.  I wanted the Illusion campers to have a high-end automotive look and I think we hit it out of the park.

Above: The Travel Lite 1100-RX overcab with the new bedspreads and pillows

Dustin: The 1100-RX is actually a floor plan we’ve produced in the past, but never with the extensive high-end feature list of our new Illusion series.  The 2014 Travel Lite 1100-RX is now a full-on luxury truck camper.  I’m very excited about it.

TCM: Once the 1100-RX Illusion was completed, were there any adjustments made to the camper?

Dustin: Yes, we made a number of adjustments to the 1100-RX as we dialed it in over the past six-months.  Most of the changes were refinements for the Illusion series including the custom backsplash in the 1100-RX kitchen.  We also worked the cabinet design and improved the plumbing to make it more user friendly.

Granicote countertops were not available for the 1100-RX, so we had them molded.  We also upgraded to the custom leatherette seating, and increased the size of the black tank to 20 gallons.

What makes the 1100-RX unique is that fact that it’s an 11-foot non-basement, non-slide floor plan.  As a non-basement model, the camper rides low in the truck yet offers a 6’6” ceiling height. 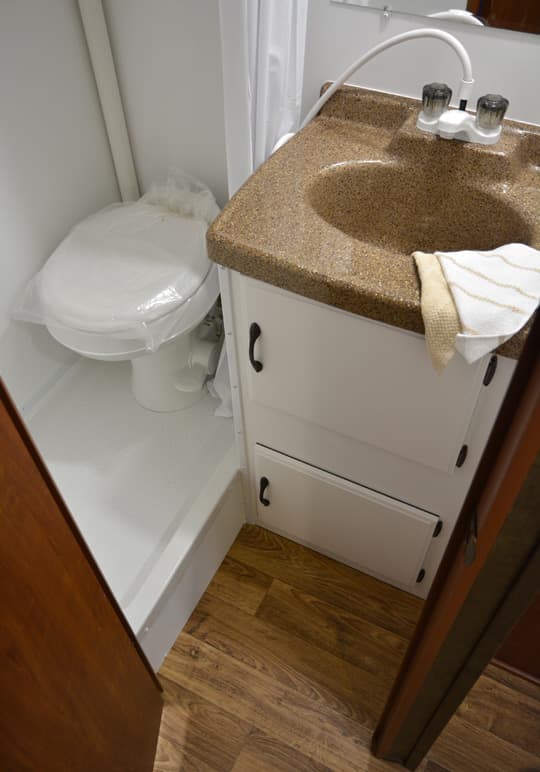 Above: Travel Lite has a new innovative bathroom design

TCM: One interesting facet of the 1100-RX is how the toilet is in the shower area, but the bathroom is a dry bath.

Dustin: It’s a hybrid wet-dry bath approach.  In our conversations with customers and dealers, many folks have asked for more storage in the bathroom, but they don’t want the bathroom cabinetry getting wet.  This hybrid approach gives us the dry bath area with a separate shower and increased cabinetry by putting the toilet in the shower area.  Yes, the toilet gets wet when you shower, but I don’t think that’s a big deal, especially given the benefits of having more room in the dry bath area.

Dustin: For the 1100-RX Illusion, we have electric heating pads on the tanks to keep those tanks from freezing.  The fresh water tank on the 1100-RX is inside the camper.

TCM: What is the warranty for the 2014 Travel Lite Illusion series?

TCM: When will the 2014 Travel Lite Illusion series be available?

Dustin: Illusions will start being delivered in mass to our dealers at the end of January.  We expect them to be at RV shows shortly thereafter.

TCM: Is there anything about the 2014 Travel Lite 1100 or the Illusion series that you would like to add?

Dustin: The Illusion is a well made unit, with flair, at a very competitive price.

Here at Travel Lite, we want to open people’s eyes to look at our brand as high-end.  We can offer a superior camper for less money.  We want to show people what we can do for high-end truck camper customers.  We offer the best bang for your buck.

Over the past few months we have put our heart and soul into the Illusion campers.  We’re confident you’re going to like it.