Adventurer Manufacturing debuts the 2015 Eagle Cap 960, a long bed, hard side truck camper with a full-wall slide-out and a deep list of premium and luxury updates.

Looking back to last July’s 2015 Eagle Cap announcement article, we may have witnessed something of a sea change at Adventurer Manufacturing.  In the introduction to that story, we made the point that Eagle Cap had finally decided to take the brand in a new direction, but we didn’t quite recognize exactly how profound that new direction was until we started the following interview.

In our pre-interview preparations, we realized that the floor plan for the new 2015 Eagle Cap 960 was nearly identical to the current Adventurer 910FBS.  At first this realization was troubling as the two brands have always been very distinct in terms of floor plans, build, and features.  No one who saw an Adventurer and Eagle Cap side by side would confuse the two brands.  For lack of a better expression, they were apples and oranges.

From the first question, we challenged Greg Tucknies, National Sales Manager for Adventurer Manufacturing, on the differences between the Adventurer and Eagle Cap truck camper products.  In light of the build changes announced in July, and the now identical floor plans being announced in October, are Eagle Cap campers becoming Adventurers with premium materials and luxury features?

Well, Greg took our question head on.  The answer, as you’re about to discover, is nothing less than a new direction for Eagle Cap. 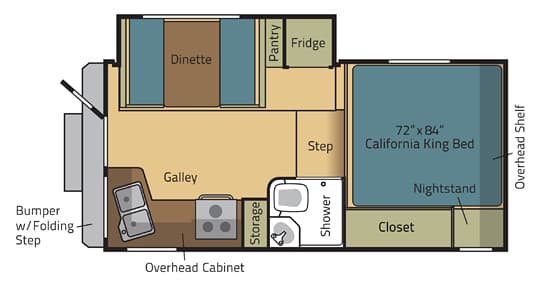 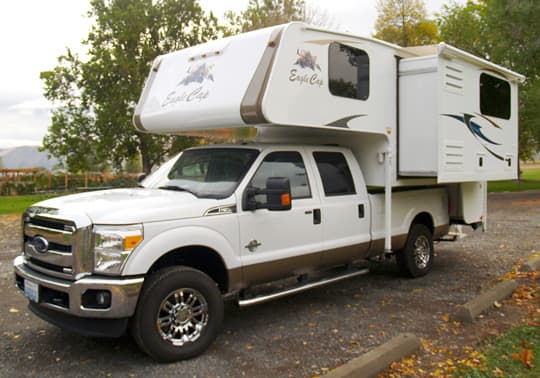 TCM: The 2015 Eagle Cap 960 floor plan appears to be the identical to the Adventurer 910FBS.  Is it actually the same floor plan?

Greg: In the automotive world, there’s Toyota and there’s Lexus.  Toyota is a value-driven brand known for high quality and reliability.  Lexus is owned by Toyota, and builds its luxury automobiles on the base of Toyota cars, but takes the quality, amenities, and features to the next level, and beyond.

Above: The Eagle Cap 960 being built at the Adventurer Manufacturing facility in Yakima, Washington – click to enlarge

That’s exactly how we are now approaching Adventurer and Eagle Cap.  Adventurer is our value-driven brand, known for high quality and reliability.  Eagle Cap builds on Adventurer using the same proven TCC lamination construction technique and three-year structural warranty, but then takes the campers to the next level of quality, features, and luxury.  Like Toyota and Lexus, the overall floor plans and designs may be similar, but that’s where the similarities end.

Above: The modular dinette in the Eagle Cap 960 – click to enlarge

Specifically, Eagle Cap has a long list of premium features rarely seen in truck campers including frameless windows, concealed television antennas, molded countertop sinks, and the modular dinette, sofa, and theater seating.  Many of these premium features are available on our value-driven Adventurer line.  Furthermore, while other brands may offer one or two of these features, only Eagle Cap offers all of them, and many of the features, like the modular furniture, are exclusive to Eagle Cap.

Nine times out of ten, people who are comparing Adventurer and Eagle Cap want the Eagle Cap product because of the considerable step up in premium materials and luxury features. 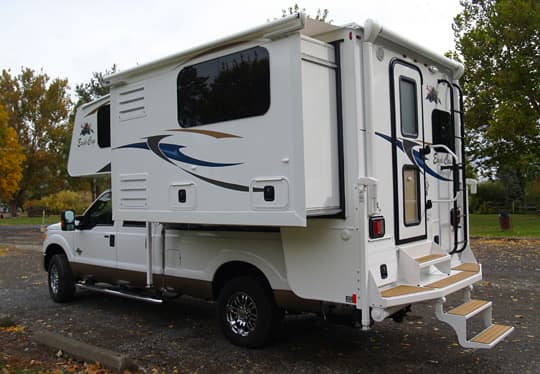 Above: The Eagle Cap 960 has a driver’s side full-wall slide-out

Greg: Yes, it does.  For 2015, the new Eagle Cap 960 replaces the Eagle Cap 950.  There were two inherent issues with the 950 floor plan that we wanted to change.  First, the slide-out was located on the passenger’s side, typically the patio area of a campground site.  Second, the 950 had a relatively small dinette-slide. 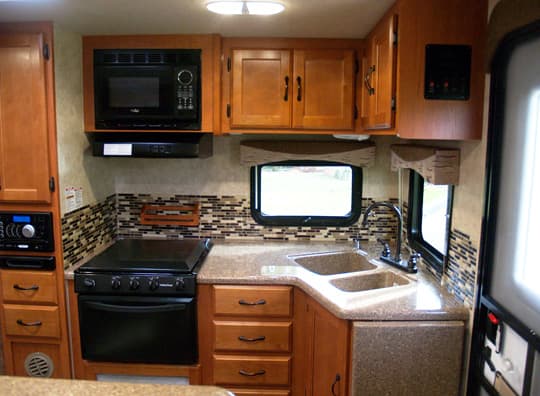 Above: The kitchen features include one-piece molded sinks, a high faucet, lots of storage, and a new backsplash

Moving the slide-out to the driver’s side and turning the slide-out into a full-wall slide were the top two priorities when we started designing what would become the new 2015 Eagle Cap 960.  On top of those three design objectives, we were developing the 2015 Eagle Cap updates including a new front nose cap, modular dinette, sofa, and theater seating options, one-piece molded sinks, 12-volt USB charging stations, and more. 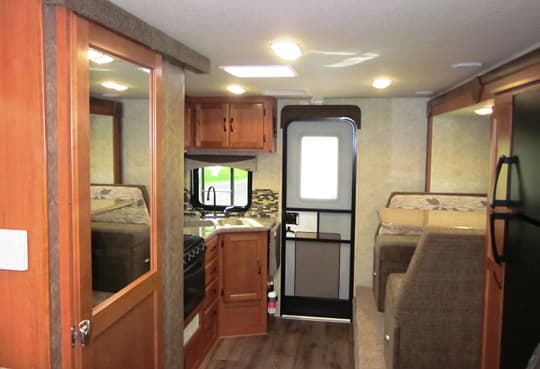 Above: The interior of the Eagle Cap 960 looking from the cabover towards the rear door

Above: Interior storage in the Eagle Cap 960 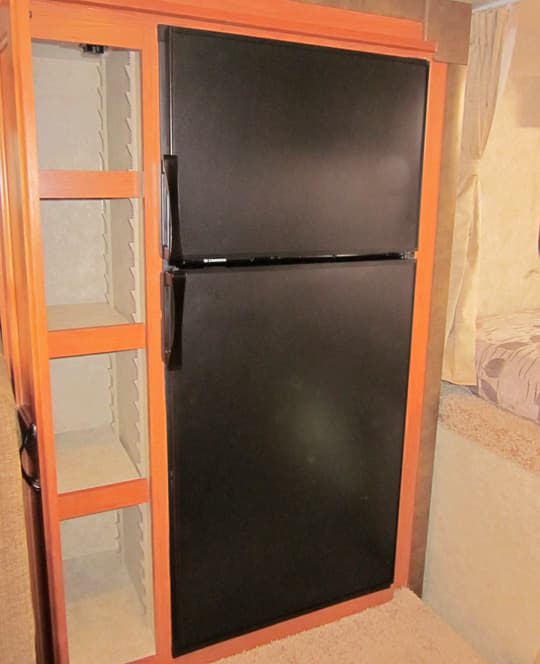 Above: Pantry storage in the Eagle Cap 960

When our design team put all of these elements into their computer, they realized that the emerging floor plan was remarkably similar our popular Adventurer 910FBS model.  From that point forward, we decided to use the time-tested floor plan of the 910FBS, but build and feature the new camper as an Eagle Cap.  We also added some unique design elements like a radius bath wall. 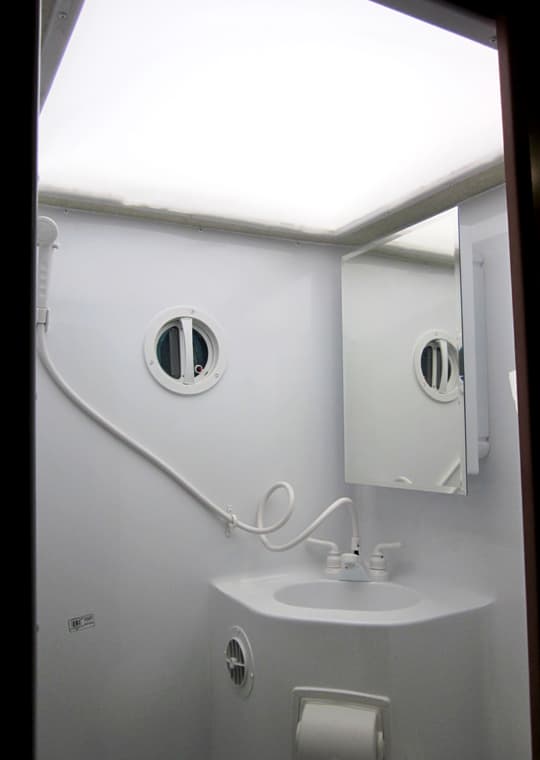 Above: The Eagle Cap 960 features a wet bath

Greg: The Eagle Cap line already has three dry bath models available; the 1165 triple-slide, the 1160 double-slide, and the 995 full wall slide.  With the new 960, Eagle Cap will now have two wet baths available; the 960, and the new short-bed compatible Eagle Cap 850 we announced earlier this year.

We built the 960 with a wet bath for Eagle Cap customers who prefer the additional storage and interior space offered by a wet bath.  The wet bath we use is also one of the biggest in the industry, if not the biggest.  For folks who like more elbow room while showering, the 960 wet bath is something you need to experience. 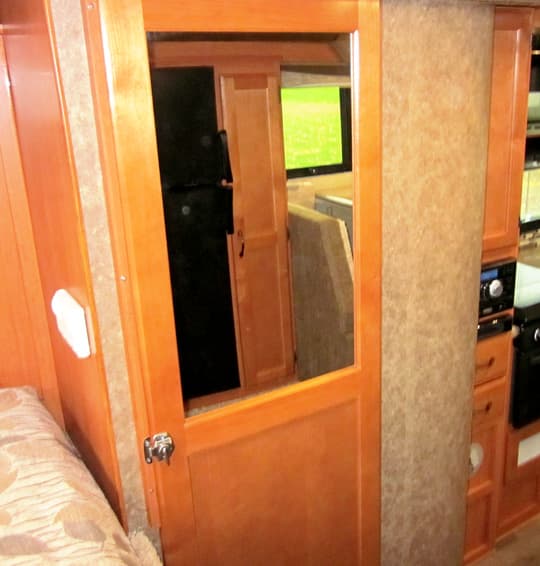 TCM: After the first prototype was completed, were there any adjustments made to the design of the camper?

Greg: Actually, there were no adjustments.  Our engineering team pretty much has the 3D CAD program to production dialed in.  In fact many of us were more surprised with the room and open feeling this unit has after stepping in the final finished product.  We have just become accustomed to expecting near perfection from engineering, and boy did they hit the mark.  This is now the sixth new model that engineering has completed from CAD to production.  Every unit has been spot on.  Dave and Darrell rock! 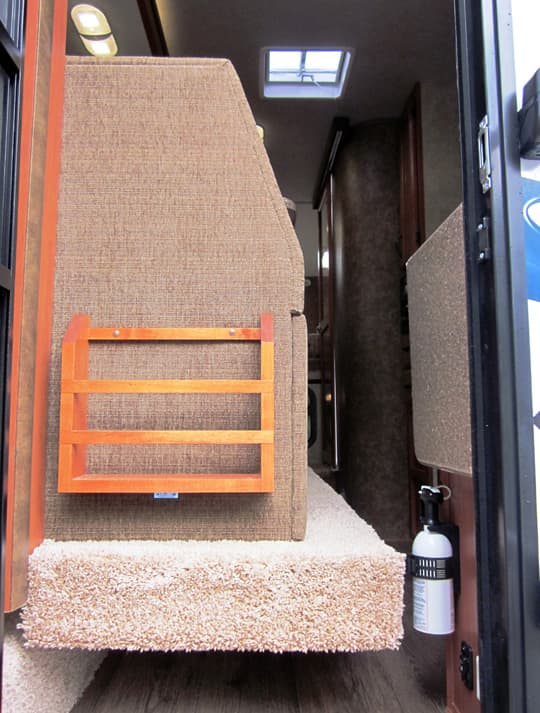 Above: The slide-out shown in the in position

TCM: Can you access the bathroom with the slide-out in?

Greg: Yes, you can.  In the video above, you’ll see Jim stepping into the unit with the slide-out closed. 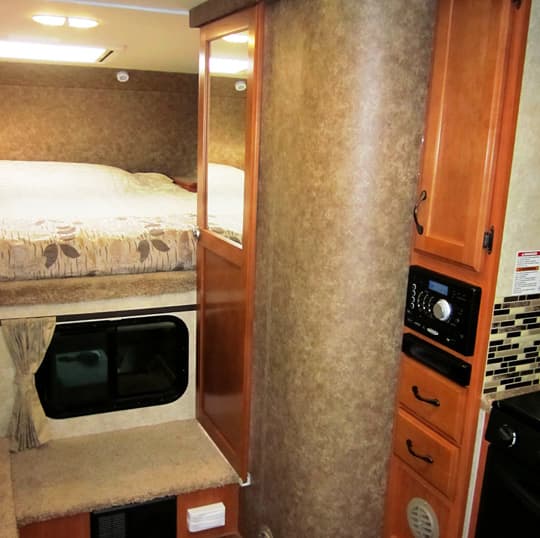 Above: The radius bathroom wall

TCM: You mentioned a new radius bathroom wall earlier.  How was that radius curve achieved?

Greg: That design element can be attributed to Dave Catron, one of our design engineers.  We start with a luan panel that’s bowed into place and attached to a supporting wall frame.  While I cannot go into further detail about how the radius is built, I can say we were very careful to properly support the radius.

About three years ago, Dave Catron was pressing on a competitor’s radius wall at the industry show in Louisville and literally put his arm through it.  If you don’t properly support a radius wall, they can be fragile. 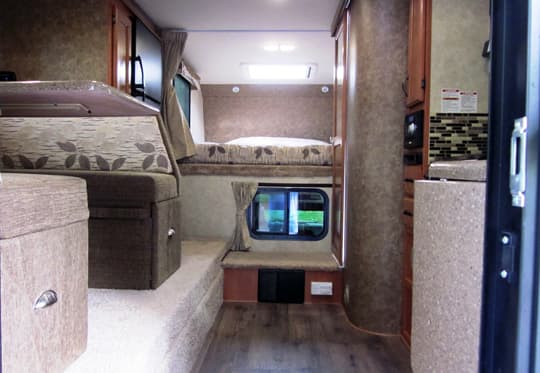 Above: The radius bathroom wall from the back door looking forward

TCM: That’s just funny.  I’m picturing Dave nonchalantly walking away, whistling away and hoping no one noticed.  You better hope that company doesn’t read TCM.  Tell us about the size of the holding tanks and why you made the tanks that size.

Above: The exterior storage compartments in the Eagle Cap 960; right photo, the five-foot slide-out storage tray

The basement is ten inches tall.  As part of the 2015 Eagle Cap update, the 960 features a five-foot slide-out storage tray.  It’s quite impressive when you slide it out because it can accommodate anything from water hoses to power cords to fishing rods. 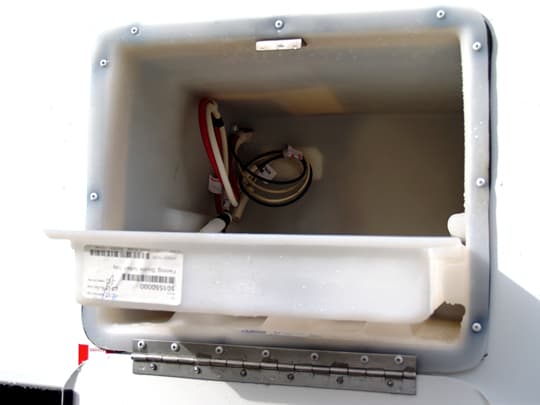 Above: The Eagle Cap 960 can accommodate two six-volt batteries on a pull-out tray

TCM: How many batteries does the 960 have, and where are they located?

Greg: The 2015 Eagle Cap 960 has an exterior battery compartment on the passenger’s side about mid-camper.  The compartment can accommodate two six-volt batteries on a pull-out tray.  Of course you can also use smaller twelve-volt batteries like two Group 27 batteries.

TCM: What are the propane tank sizes?

Greg: There are two twenty pound tanks on the rear passenger’s side. 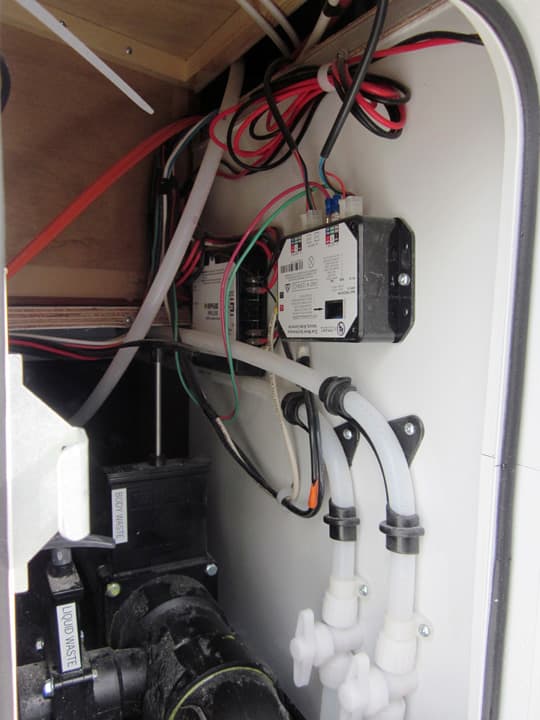 Above: The service center in the Eagle Cap 960 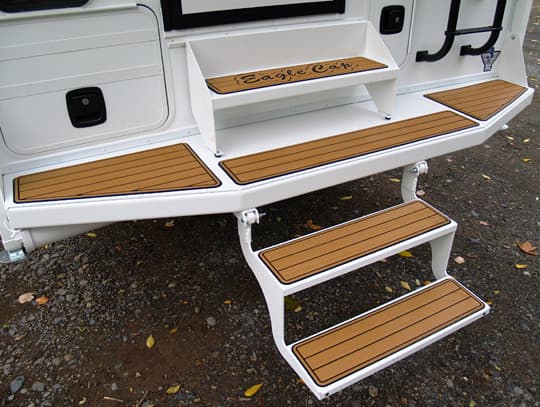 Above: The Comfort Step is an option on the Eagle Cap 960

TCM: Tell us about the standard bumper and entry step system for the 2015 Eagle Cap 960.

Greg: The standard bumper is the SuperStep, which is nine inches deep, along with an oversized 36” single step.  The Comfort Step bumper is optional. 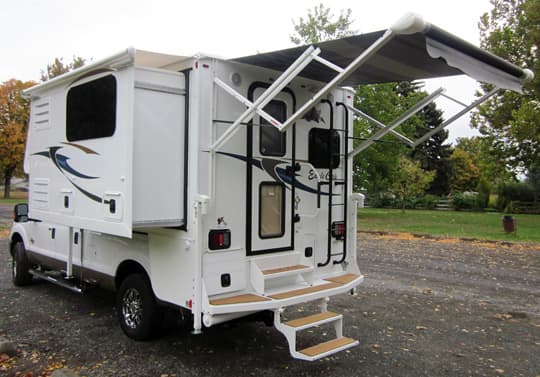 Above: The electric rear awning on the Eagle Cap 960

TCM: As a mandatory package, is the EC Max package included in the base price and weight of the unit?

Greg: Yes, it is.  In fact, you will not find the EC Max package in our Build Your Own system as all of the items are included in the base weight and MSRP.

When you look at the build sheet a dealer will use to order an Eagle Cap camper, the EC Max package is listed as $2,100 with an asterisk.  The build sheet then explains that the mandatory EC Max package is, “included in the base price above”.  By calling attention to the features in the EX Max package, our customers can see the value of the package, and we feel that’s important to point out.

I had a customer almost not buy an Eagle Cap because she couldn’t find a feature we took for granted as part of our standard build.  When she called, I assured her we had the feature – in this case a hot water heater bypass – and she explained that it was hard to find that information.  The EC Max should help with that problem in the future. 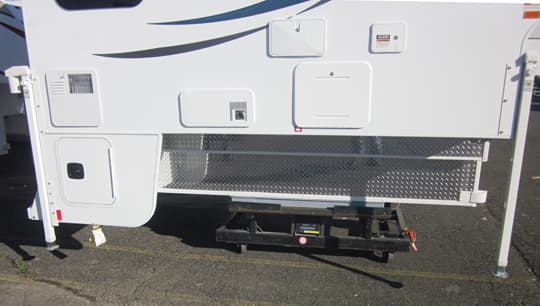 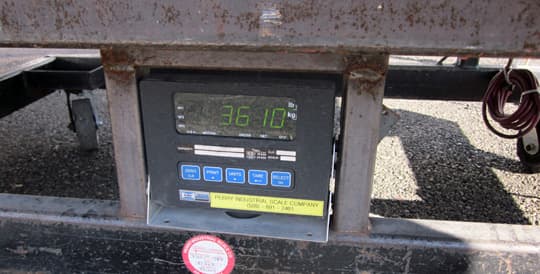 Above: The weigh-in of the Eagle Cap 960 with standard build features

TCM: What does the 2015 Eagle Cap 960 weigh with standard build features? 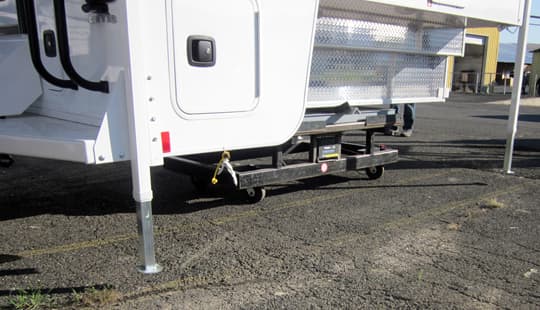 Above: The center of gravity came in at 50″ (measured front to back)

Greg: The target was 47” and the computer said it would be 46.5”.  When we measured a standard build camper at the end of the production line, the center of gravity came out to be 50″. 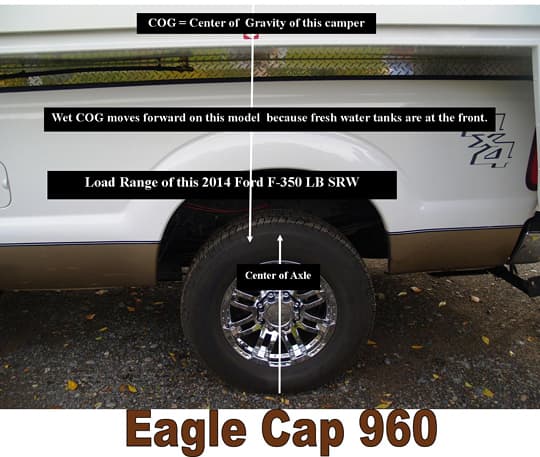 Above: The center of gravity is marked on every Eagle Cap camper with a red sticker

The center of gravity is clearly marked on the side of the camper, as it is on every camper that comes down the Eagle Cap and Adventurer production lines.

TCM: As it should be, and we thank Adventurer for doing so.  What is the MSRP for the 2015 Eagle Cap 960 with standard build features?

Greg: Eagle Cap truck campers come with a three year structural warranty for anything we manufacture including walls and cabinets.  We have a one year bumper to bumper on anything we construct, like buttons and valances.  All of the components have their own individual warranties.  The frameless thermal pane windows have a lifetime warranty.

Greg: The 960 is showing up on dealership lots right now. 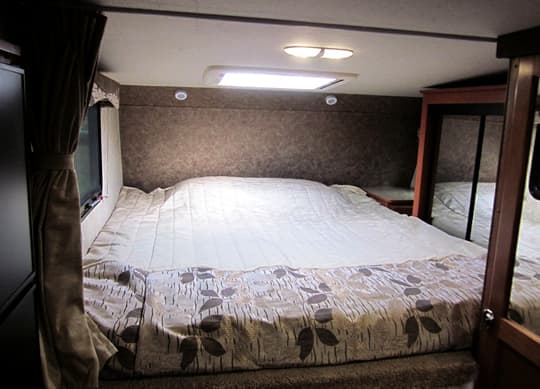 Above: A King size bed is standard in the Eagle Cap 960

TCM: Is there anything else about the 2015 Eagle Cap 960 that you would like to add?

Greg: The King size bed is featured in the new 2015 Eagle Cap 960 and has been a huge hit for both the Adventurer and Eagle Cap truck camper lines.  We keep getting customers asking us to put the King size beds in models that don’t currently offer it.

We’re working on some new ideas for Eagle Cap for the Spring of next year.  We are looking at doing some new things, like possibly a non-slide Eagle Cap model.