For all the excitement about slide-out truck campers, there is still a clear need for traditional, non-slide hard-side truck campers.

Add these attributes up and you get quite the enticing package; lower weight, lower height, lower center of gravity, and lower rig cost.  What’s missing?  Floor space, floor space, and more floor space.  If you’re looking to buy a truck camper with lots of floor space, or intend to practice the Texas Two Step in your rig, skip over to the slide-out campers.

For 2014, Adventurer is introducing an all-new hard side non-slide truck camper, the 80RB.  To tell us more about this model, we talked to Greg Tucknies, National Sales Manager for Adventurer Manufacturing. 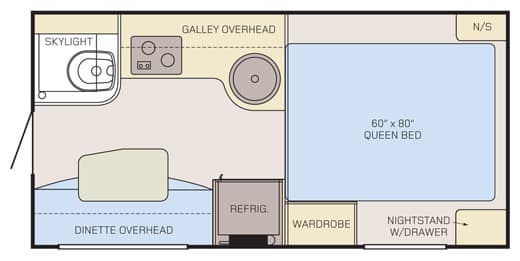 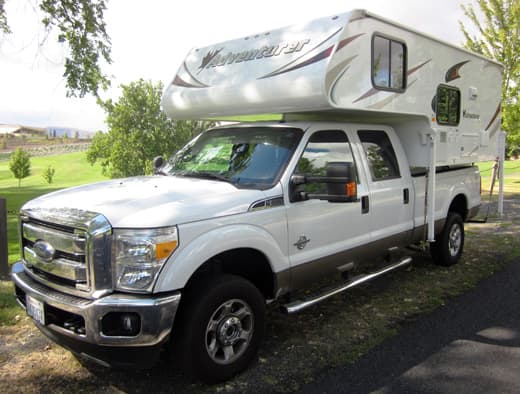 TCM: Does the 80RB replace an an existing Adventurer floor plan, or is it filling a new niche for Adventurer?

Greg: The 80RB is replacing the 80W, which we discontinued this year.  It is also filling a new niche for Adventurer, the 5.5 foot short bed truck category.

When we sent our dealers an email announcing the 80RB, they immediately saw its potential and were ordering two and three units at a time.  We built the first run of twenty 80RB campers and they sold out right away.  In the next run of forty, twenty-eight are already sold.  We have had five customers buy the 80RB sight unseen.  If that’s a sign, we may have another hit floor plan on our hands.

Greg: Yes, the 80RB has some unique features.  First, the 80RB will honestly fit in the modern half ton marketplace.  The weight and center of gravity came in exactly where we wanted it to be making it a safe match for most late model half-ton trucks. 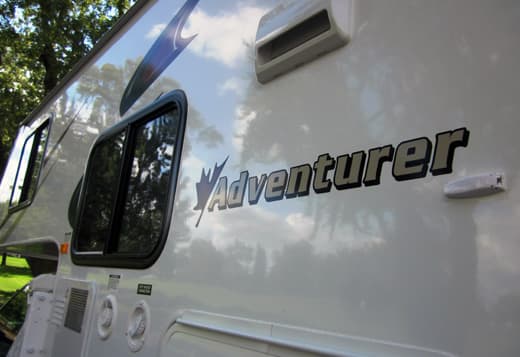 The 80RB is also a very luxurious camper for its class.  The standard Lamilux 4000 exterior and the new 2014 graphics give the camper a very high-end exterior aesthetic.  Inside the 80RB, the bathroom really impresses by making a flush toilet and shower possible in this weight category. 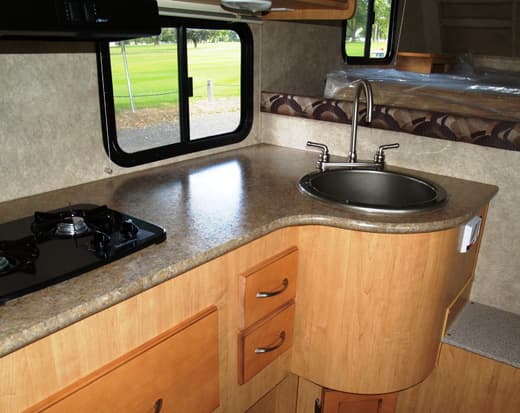 Above: Radius wall in the galley 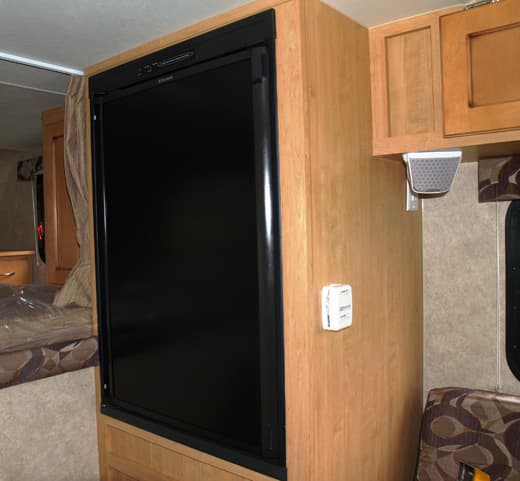 Above: Four cubic foot two-way refrigerator in the 80RB 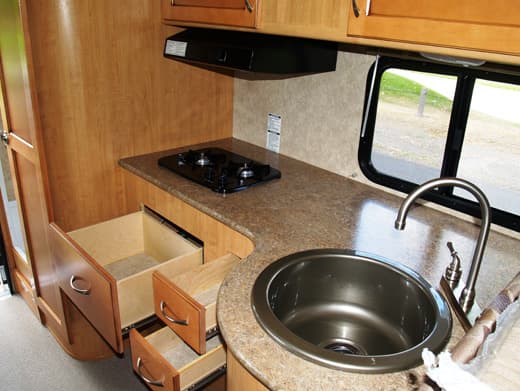 Above: Storage and radius walls in the galley

Adventurer Manufacturing Engineer, Dave Catron, did a nice job with the radius design in the 80RB galley.  I think these features at this weight class and price will make the 80RB our number one seller for 2014.

Greg: Just yesterday we weighed the first production 80RB at 1,720 pounds.  That’s 150 pounds less than the 80W it replaces.  When you’re aiming for the half-ton market, every pound counts.

Unfortunately, we have competitors that offer 2,200 pound dry weight campers that say their campers are half-ton ready.  It’s really buyer beware.  What they’re doing is matching their camper to a hypothetical half-ton truck with the most payload possible, currently a bare-bones Ford F-150 with the factory upgraded suspension package.  Very few, if any, of our potential customers have this exact truck.

TCM: Adventurer is to be commended for weighing each and every truck camper as it leaves the factory to give the customer an honest dry with options weight.  What did the 2014 Adventurer 80RB weigh with standard build options as it left the factory?

Greg: 1,720 pounds is the base dry weight.  With standard build options, the camper is going to be about 1,786 pounds, which includes the camper caddy, Fantastic Fan, rear awning, roof ladder, outside shower, and stereo.  The first few campers that came off the line came in at 1,785 pounds, 1,786 pounds, and 1,898 pounds.  The 1,898 pound 80RB featured an air conditioner.

Greg: Those two campers are exactly the same build.  The differences in weight occurs from tiny amounts of water being left in the plumbing after testing as well as minor variances in the amount of caulk or other materials in the product.  Campers built exactly the same almost never come out weighing exactly the same on the scale.  The important thing is that we do weigh each camper and post that exact weight inside the unit. 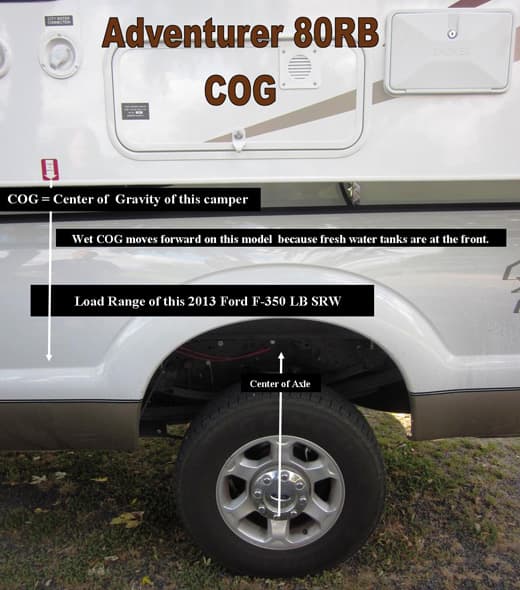 Above: The 80RB fits on long and short bed trucks; demonstrated above is the center of gravity on a long bed truck 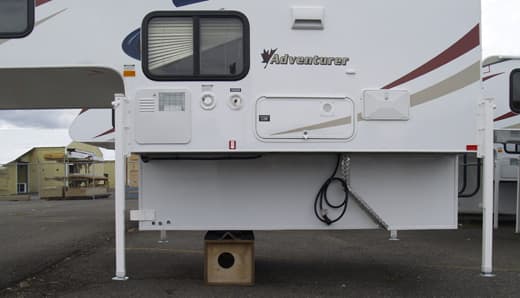 Above: Demonstrated above is the 80RB having its center of gravity measured at Adventurer

TCM: Where is the center of gravity on the 80RB?

Greg: The base dry weight unit weighed in at 1,720 pounds with a center of gravity of 27.5 inches from the front wall (the front of the bed back).  I have not measured every super short bed truck, but that puts the 80RB center of gravity forward of the rear axle on the Ford, Dodge, and Toyota Tundra.

The amazing thing is that our Computer Aided Design (CAD) program estimated the center of gravity to be at 27 inches before we built the unit.  It came in so close at 27.5 inches.  Our engineering team is really hitting the mark. 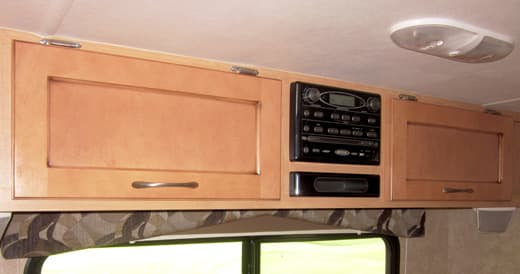 Above: Overhead cabinets in the dinette and stereo system in the 80RB

TCM: How did you pull the weight out of the 80RB without compromising quality or structural integrity?

Greg: Building light-weight campers requires a multi-faceted approach.  We changed the cabinets to a lighter weight structural wood.  We used our proprietary TCC construction and lamination with light ply plywood and Azdel composites.

Design is also a major component in making our campers light weight.  During the design process, everything gets weighed, challenged, and calculated to find ways to save weight.

Above: Exterior features of the Adventurer 80RB include a sewer hose compartment, battery and shore power compartment, and a twenty-pound propane compartment.  Click to enlarge. 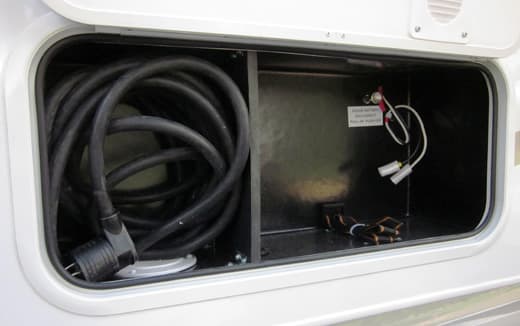 Above: Another exterior feature is the outside battery and power cord compartment

TCM: Is the structure of the 80RB based on the established 80GS and 80SK, or is this a completely new camper from the ground up?

Greg: The 80RB is a brand new camper from the ground up.  When it’s time to develop a new model year, we look at customer requests and try to give our customers what they want.  For the 80RB, customers wanted a camper to fit a half-ton, offer a north-south bed, and feature a wet bath with a flush toilet and a shower.  By starting a brand new floor plan, rather than adapting an old floor plan, we can focus on customer requests and innovations.

I should mention that this camper is made to fit short or long bed trucks.  It even fits the super short bed trucks with five and a half foot beds.  We haven’t been able to fit super short beds before, especially not with a camper that has a proper center of gravity for these trucks, a flush toilet, shower, and north-south bed.

TCM: The holding tank sizes in the 80RB are 15 gallons fresh, 6 gallons grey, and 6 gallons black.  Why did Adventurer make the tanks these sizes?

Greg: Again, we were focused on the half-ton market for the 80RB and needed to keep the holding tank weights in check.  The 80RB has the same size tanks as the 80GS, another very popular model for Adventurer. 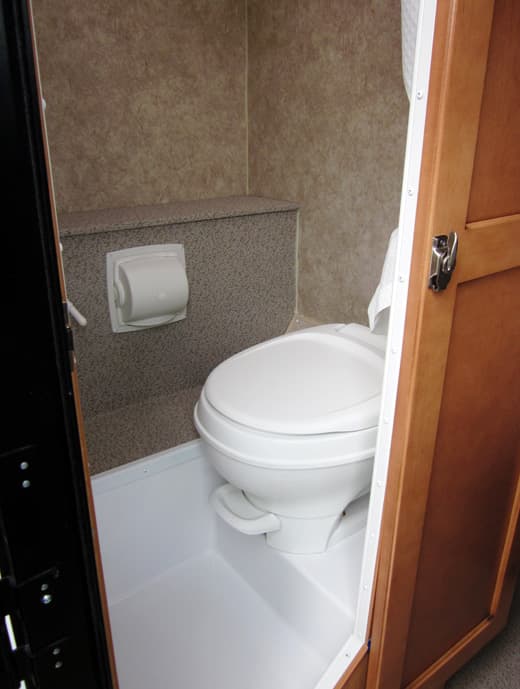 Above: The wet bath in the Adventurer 80RB

TCM: With a 6 gallon black tank, why not go to a 5.3 gallon Thetford cassette toilet and give the customer more options for dump locations?

Greg: We’ve looked into the cassette product over the years.  In fact, we looked at it again last year, but we have not had good customer feedback on the cassette toilet system.  It may be something we consider again down the road.

Above: Roll-over sofa in the 80RB with cup holders.  Click to enlarge.

TCM: Tell us about the roll-over sofa in the 80RB.

Above: LED reading lights are standard in the 80RB

TCM: Does the 80RB come standard with all-LED interior and exterior lighting?

Greg: Yes, the 80RB comes standard with all-LED interior and exterior lighting, as well as the standard features that we announced in the 2014 Adventurer Announcement article. 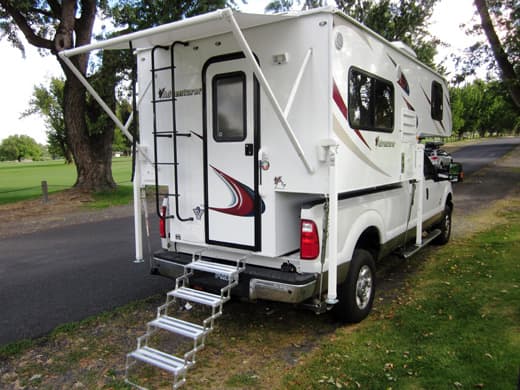 Above: Optional rear awning and scissor steps on the 80RB

TCM: The 80RB is designed to work with scissor steps.  What scissor step system is optioned with the 80RB?

TCM: Tell us about the optional Carefree “Truckin-Awn” awning.

Greg: The Truckin-Awn is the manual rear awning that we’ve been using for our eight foot campers.  It’s a thinner armed, lighter weight unit that’s positioned just over the entry door.  It’s four and a half feet wide, and comes out six feet.  It’s been a popular option for years. 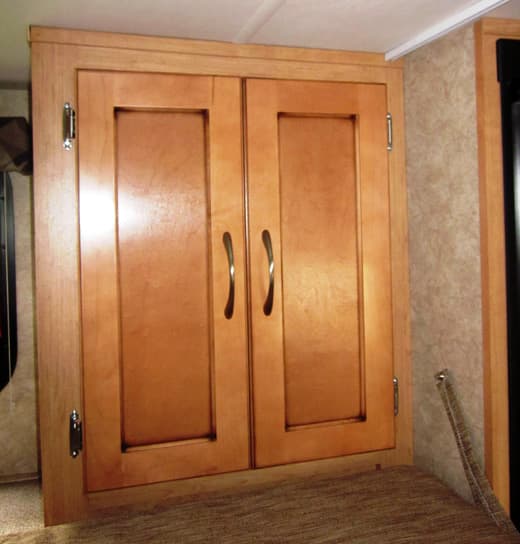 Above: Overcab wardrobe storage on the passenger’s side 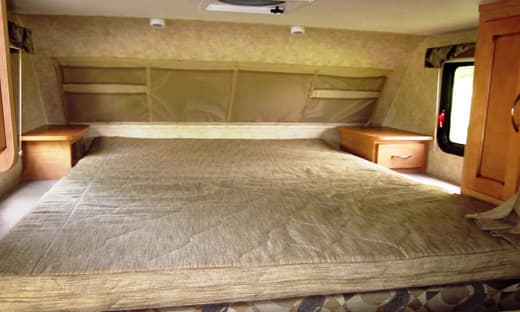 Above: A north-south queen size bed with a camper caddy for extra storage

TCM: What is the optional Camper Caddy?

Greg: The Camper Caddy is a zippered storage pouch and netting system that debuted with the 80GS is 2009.  It gives you more storage opportunities and is another popular item on our 80GS, 80SK, and now the 80RB.

TCM: What is the MSRP for the 80RB with standard build options? 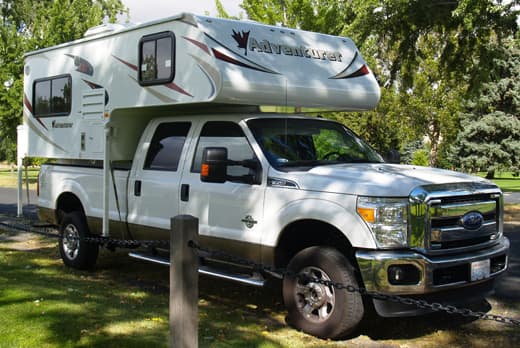 Above: Adventurer 80RB from the passenger’s side

TCM: When will the 80RB be available?

Greg: They started shipping in early September.  We already have them at the Fraserway RV locations in Canada and S.C.A.T.T. Recreation in California.

TCM: Is the 80RB available on the build your own section of Adventurer’s website?

Greg: Yes, it’s there and ready to go.  We welcome you to build-your-own 80RB.

TCM: Is there anything else about the Adventurer 80RB that you would like to add to your interview?

Greg: You’re just going to have to see this camper in person.  We are very excited about this eight foot camper.  The retail customers are also excited and are buying it sight unseen.  Dealers are stocking this unit two and three deep.   This is an exciting camper!

I believe we really hit the mark with the north-south bed and bathroom with a flush toilet and shower for a half ton truck at 1,720 pounds.  The center of gravity is in the middle of the 5.5 bed.  Of course it also carries well on a long bed with center of gravity that will be very far forward.  There are just a lot of pluses to this unit.  We’re jazzed and excited about it.

For more information on the Adventurer 80RB, please visit their website at adventurercampers.com.