After a devastating fire destroyed the Northern Lite factory last February, Northern Lite has completely redesigned and rebuilt their Kelowna, British Columbia factory and resumed production of their two-piece molded fiberglass truck camper line.  Without a doubt, this is the single most impressive feat in modern truck camper industry history.

If that doesn’t rock your socks, Northern Lite has also redesigned two of their most popular truck campers from the ground up.  All-new for this year, Northern Lite is introducing the 10-2EX and a reworked 9-6.  That’s a brand new factory and two new  Northern Lite campers in eleven months.  Truly incredible.

Please join us in congratulating Mac Donkin, President, Keith Donkin, General Manager, and the dedicated men and women of the Northern Lite office and production teams for coming back from the brink, and doing so quickly, efficiently, and with a new facility and refreshed camper designs that promise to be better than ever.

To get a complete update on the current production and shipping status of Northern Lite, we contacted Keith Donkin, General Manager for Northern Lite. 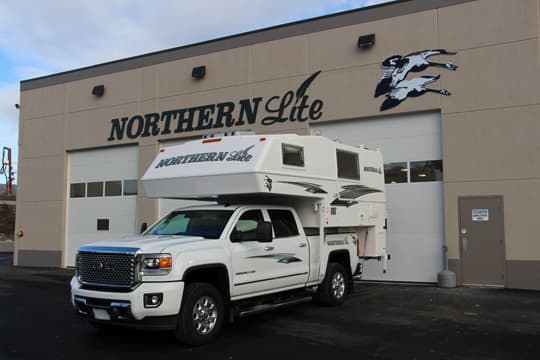 Above: The first camper out the door, a Northern Lite 8-11 on a GMC truck

TCM: When was production completed for the new Northern Lite manufacturing facility?

Keith: The building was completed about the middle of November.  We moved the offices over from our temporary location on November 28th.  About three weeks before that the production team was building work benches, racking, and tools.

In December, we started official production in the glass shop with the Northern Lite 8-11 model.  As that first camper progressed through each station, our team tested and verified every jig and process.  The first Northern Lite camper from our new factory was completed and shipped the first week in January.  It’s as good or better as any camper we’ve ever built. 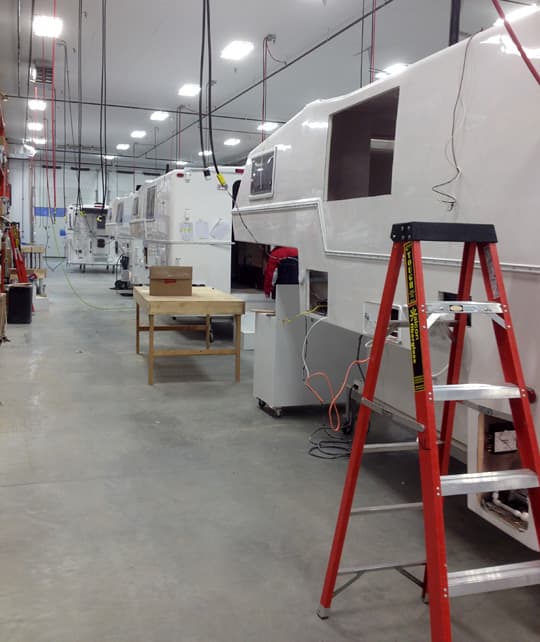 TCM: Have most of your original office and manufacturing team returned?

Keith: We have gotten every employee back, except for one.  That was huge.

This past summer we talked to our factory workers about everything they did at their station.  That paid off as they recalled, from memory, specific measurements and information.  It’s amazing the knowledge and measurements our team retained.  Their help made the rebuilding process much smoother, considering we lost every jig and tool in the fire.

We’ve currently hired four more people and I have more interviews this morning.  The plan is to increase our work force by forty percent to meet our production demands.  We started adding people in the glass shop and now we’re starting to add people on the line.

The new building is also significantly more efficient than the old building.  That is going to help with production along with having the extra team members.  We are ramping up. 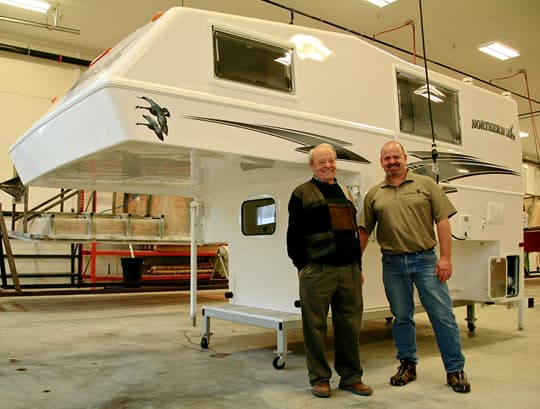 Above: Mac and Keith Donkin with the first completed Northern Lite 8-11

TCM: What was it like to see that camper coming down the line after months of rebuilding? 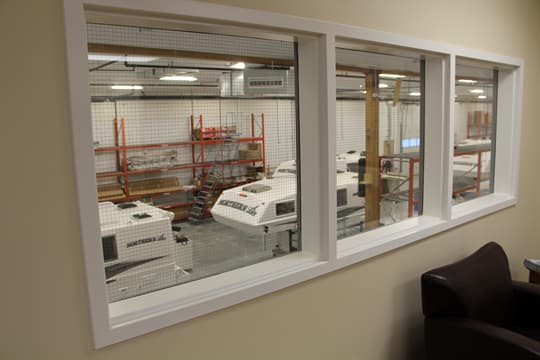 Above: The viewing windows from the second floor office area

During this whole process, I have spent a lot of time downstairs and very little time at my desk.  I was there to make sure things were moving forward, and that the team had the tools and parts they needed.

We have reviewed every aspect of each model, step-by-step, re-evaluated everything, and made improvements.  Some things we had always done a certain way, but now we have been given the opportunity to find better ways to do things.  We have taken our already excellent product and made it even better. 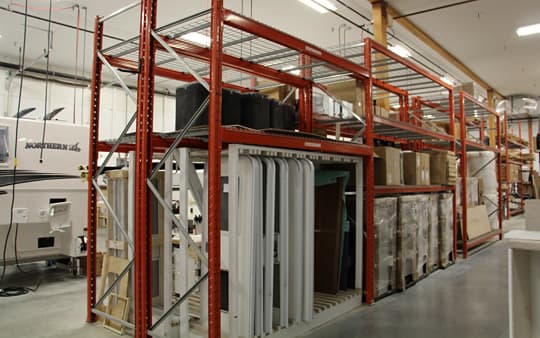 Above: Parts inventory prepared for production 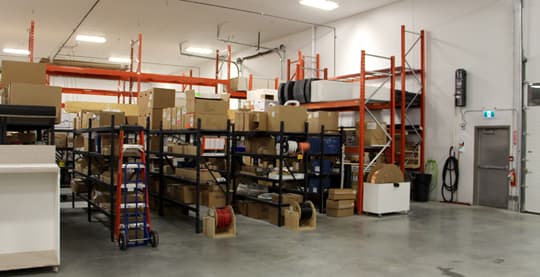 Above: More parts and supplies ready to go

Looking at the big picture, it has all gone well.  There have been no parts or material shortages.  I was fearful in the back of my mind that getting supplies could have been a problem, but the suppliers have rushed things to us.  One of the battery box sizes had to be changed for the new 9-6, and our supplier stepped up and got it to us faster than normal. 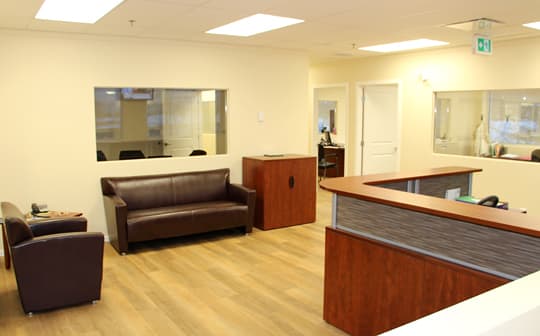 Above: The reception area at the new Northern Lite factory

TCM: Tell us about how the factory is different.

Keith: Our new facility is much larger with nineteen foot high ceilings in the production area.  Our shipping and receiving area is also larger and more accessible for the delivery trucks.

We’ve expanded our front footprint by six feet, and we were able to come out of the back of the building quite a bit.  There was an old septic field there, so we were able to clean that up, and add a retaining wall to the end of property giving us much more usable space to expand the building and storage areas. 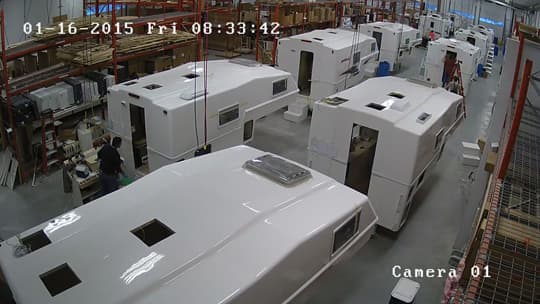 Above: The Northern Lite production line as viewed from a factory camera system

The whole building has state of the art lighting, which helps to make for a great work environment for the guys.  We have air conditioning, and tilt up insulated walls, which provides a constant temperature in the factory, even in the winter months.  There are no cold spots in the factory because the temperature is very even and comfortable.

Above: The new fiberglass spray booth area is state-of-the-art with bright lights and white walls – click to enlarge

Our building has been engineered better and is up to the new health and safety requirements on how much air you have to cycle.  Everything is state-of-the-art, and up to current code. 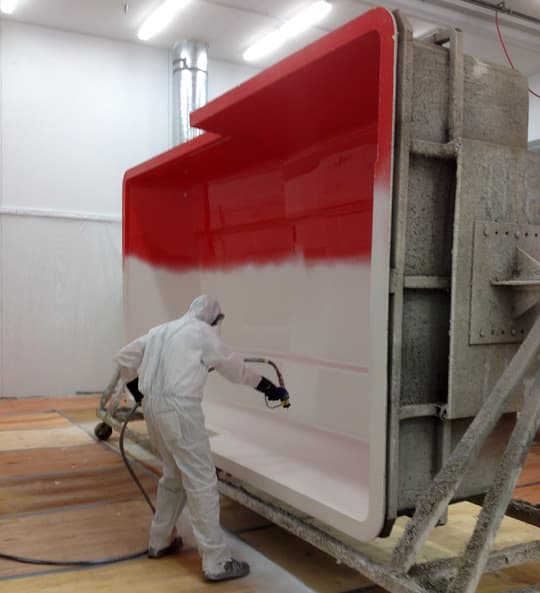 The glass shop is larger and has a one million BTU furnace.  There is no overspray in the booths, and lots of air movement.  All of the walls in the factory were painted white, and the splash off is bright, which is good for gel coating and chopping. 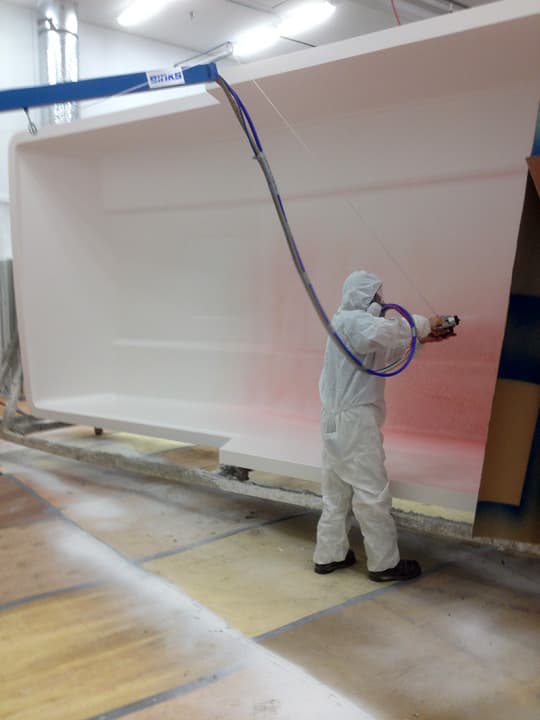 It’s nice for the guys in there, and it’s modern.  We updated our glass booth five years ago, but the new one is even more state-of-the-art.

TCM: Do you now have a full set of fiberglass molds at the factory and ready to go?

Because of the significant changes to the mold, the 10-2 requires more jigging and cabinet making.  It’s being made as we speak.  The Lite series will be next. 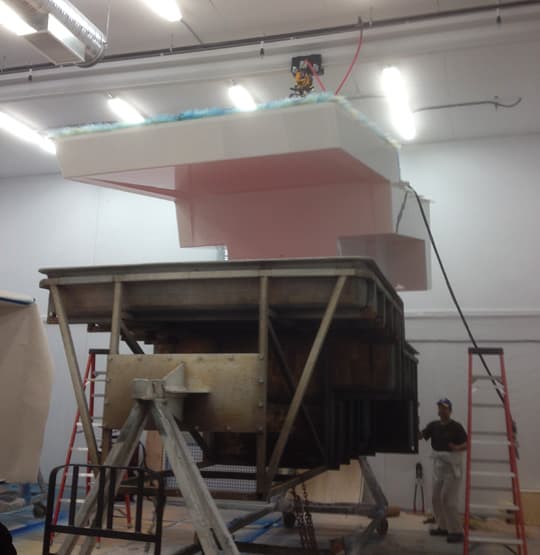 Above: Pulling a fiberglass shell from the Northern Lite 8-11 bottom mold 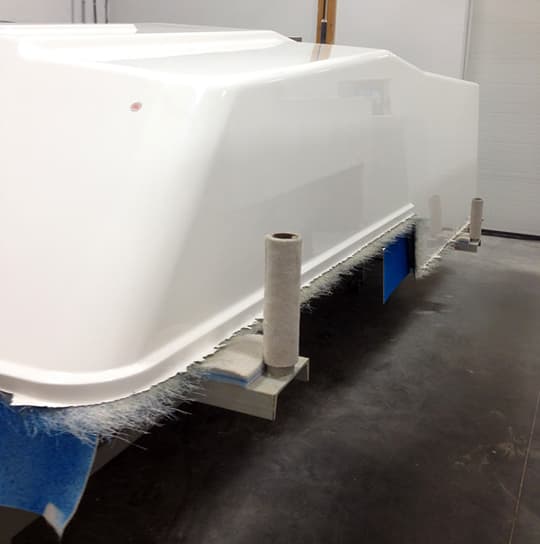 Above: The top fiberglass shell of a Northern Lite 8-11 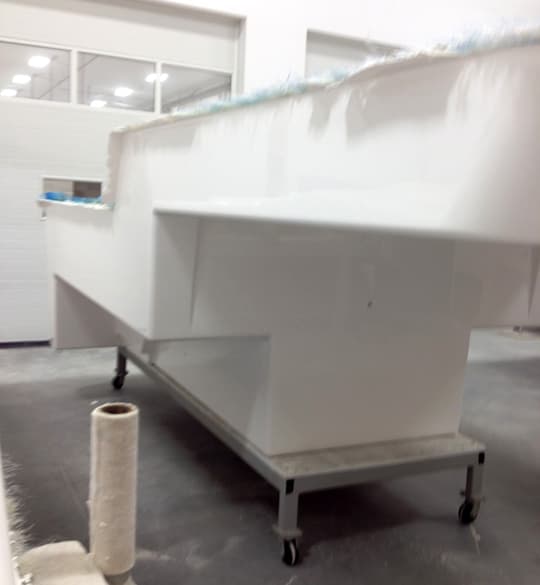 Above: The bottom fiberglass shell of a Northern Lite 8-11

TCM: Are the new molds of the same quality as the molds that were lost in the fire?

Keith: Within the last three years we had redone all of our molds, so the previous molds were excellent.  The new molds are the same high quality.  With the new molds we have made some important changes like lowering the side wings to make the campers fit truck box rails better.  We also changed the mold shapes to enhance interior space, and reinforced the roofs so that we no longer need an air conditioner platform.

Above: Northern Lite campers coming down the production line in the new facility – click to enlarge

TCM: Have you achieved full production at this time?

Keith: We are still ramping up.  Production is getting faster and more efficient every day.  Our goal is to double the level of production that we had before the fire.  As each model comes down the production line, the guys are getting back into their routine.

With the new building, we’ve created a fantastic work environment.  We put some money into the new lunchroom.  It has LCD televisions, and a glass exterior window wall making the room bright and inviting.  Plus, there’s lots of space for everyone.

We also have new tools and equipment.  It’s an ideal working environment for everybody.  Our team was a top priority during the design and rebuild process.  Without our long term employees, it would have been hard to restart.  The dedication of our employees made a very difficult thing much easier.

TCM: What can you tell us at this point about the new 10-2EX?

Keith: The 10-2EX will be the largest camper we’ve ever built.  There will be more to come on the Northern Lite 10-2EX in an upcoming Truck Camper Magazine exclusive.

Keith: Because we didn’t get restarted until more than half way through what most manufacturers deem the model year, we made the decision to go right to the 2016 model year when we restarted.

TCM: Can you tell us anything more about what to expect with the new models?

Keith: There are a lot of small refinements stem to stern that add up to a higher-quality unit.  For example, we have new furnaces that improve air flow and offer higher heat output.  The stove tops now have glass covers.

We widened the 9-6 mold to give it more interior width.  You also get a little more height in the dinette area.  When you see a new Northern Lite in person, you’ll immediately recognize how all of these upgrades make for the best Northern Lite truck campers we’ve ever produced. 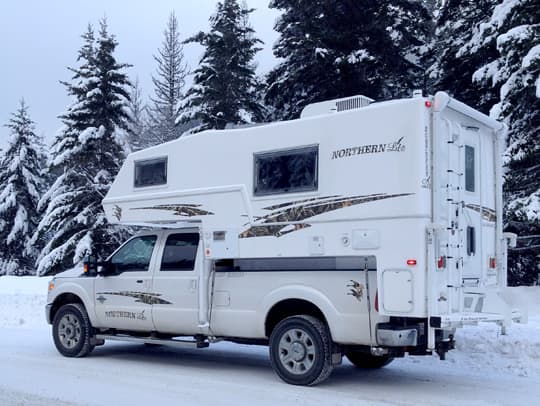 Above: Keith’s personal camper with the new-for-2016 optional camo graphics

TCM: There have dramatic changes to the value of the US and Canadian dollars over the past year.  Will these changes affect the MSRP of 2016 Northern Lite truck campers?

Keith: It will effect our pricing, for the better for the US consumers as it will result in significant savings. 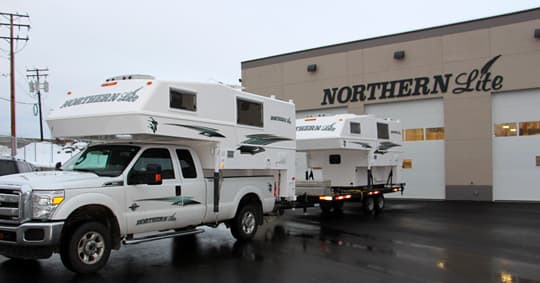 Above: Loads of Northern Lite campers have started shipping to dealers and customers

TCM: In October you told us that the first Northern Lite campers off the line would go to customers who had units on the line when fire struck in February.  Have those models been manufactured and shipped yet?

Keith: Our priorities right now are building the retail sold campers and getting units to the dealers for their upcoming shows.

The Boise and Tacoma shows had product.  The next show Northern Lite campers will go to is Spokane, and then Calgary.  There will also be new Northern Lite truck campers at the Edmonton show.  The first Northern Lite 10-2EX will be at the Seattle show.

For more information about Northern Lite, visit their website at www.northern-lite.com.