Northern Lite nears completion of their brand new factory, unveils new fiberglass molds, and teases us with fresh details of the Northern Lite campers to debut late this Fall.

There’s a great deal of excitement in the truck camper industry and community right now about the news coming out of Kelowna, British Columbia.  After a devastating fire last February burned the Northern Lite factory to the ground, a new and modern factory is well underway.  New fiberglass molds have been precision cut and shipped from the United States.  Best of all, plans are being forged to roll Northern Lite truck campers off the production line before the end of the year.  That’s right folks, Northern Lite truck campers are coming!

Without a doubt, this is the best come back story we’ve ever covered.  After watching too many truck camper manufacturers fold due to challenging economic circumstances in 2008 and 2009, it’s awe inspiring to see Northern Lite triumphantly returning after literally burning to the ground in the middle of peak production season.  Northern Lite’s recovery is a true testament to the strength, skill, and fortitude of the Northern Lite team.

As truck camper enthusiasts, we’re also very excited to see Northern Lite’s new campers.  Since they had to redesign the molds, what did they change?  Since they lost all of their jigs, what improvements are they working on?  And what’s going on with the factory?  We’re full of questions, and we know exactly who to ask.

Taking a moment away from the construction site, we talked to Keith Donkin, General Manager for Northern Lite.

Above: Northern Lite is rebuilding – the roof is being finished, the windows are in, and the garage doors are on – click to enlarge

TCM: When we ran the story, “Northern Lite Will Rebuild” announcing Northern Lite’s commitment to rebuild the factory and resume manufacturing, the building was nothing more than a cleared foundation.  What’s the status of the building today?

Keith: As of this morning, all the walls are up, the roof is sheeted, the overhead doors are installed, the windows are in, and about one-quarter of the parking area is paved.  Right now we are prepping the floor, after raising the floor a foot.  200 dump truck loads are hauling in material.  It’s a very busy construction site, and things are moving fast. 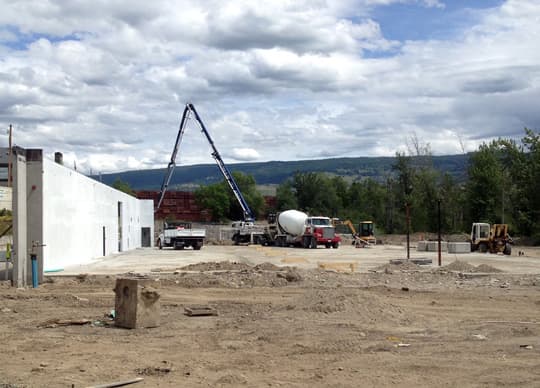 Above: Portions of the original foundation were used for the new building

TCM: That’s fantastic news.  Did your plans to use the original building foundation work out?

Keith: Portions of the existing foundation were used.  We’ve expanded the building quite a bit, putting in new foundation and footing.  We went with a tilt-up wall panel building and that company fell behind schedule.  That has been our only delay.  The footings and foundation walls didn’t cause any delays.  They went up fairly quickly.

Above: The new Northern Lite glass shop being built; it will be the largest spray booth in the Okanagan Valley when it’s complete – click to enlarge

TCM: Has construction of the new fiberglass shop started yet?

Keith: Yes, it has.  The fiberglass shop is four separate walls within the main building.  All of the fiberglass shop walls are fired rated.  We also enlarged the glass shop.  It will be the largest spray booth in the Okanagan Valley when it’s complete.  Everything has been increased for production.

We also built a covered area for the molds.  The molds and glass shop being finished is a priority.

When we were designing the building we were looking at flow for increased production.  The plant will be a nice facility for our workers to work out of.

Above: Early stages of construction; construction is scheduled to be completed by the end of November 2014 – click to enlarge

TCM: When is construction scheduled to be completed?

Keith: We’re still targeting full production by the end of November 2014.  Some areas might be sooner than that.  As everything stands right now, that’s my target.  We were a little behind because of the wall panels but, in the past few weeks, a lot has been accomplished.

Yesterday we had nine different sub-trades inside and four outside.  There were electricians, plumbers, painters, door installers, roofers, and pavers.  Everyone had full crews on-site, so we’re getting a lot accomplished.  It’s been good.

Above: Middle stages of construction; construction is scheduled to be completed by the end of November 2014 – click to enlarge

TCM: Are you expecting most of your Northern Lite manufacturing team to return?

Keith: Yes, we’re expecting almost everybody back.  Our plan is to add 50% to our existing work force to meet the demand of truck camper orders.

TCM: Have you been able to rebuild lost jigs and redesign cabinetry?

Keith: All the jigs and cabinets have been reconstructed and were completed by mid-summer, so that’s all ready to go.  All the jigs had to be done off the new 3D AutoCAD designs.

Above: The Northern Lite 9-6 plug being milled – click to enlarge

TCM: Tell us about the design and development of the new molds.

Keith: We were fortunate to have a designer in Kelowna who does a lot of work in the United States for US boat manufacturers.  We utilized their abilities for 3D AutoCAD design.  We redesigned the 9-6 molds, the 10-2 molds, and all the shower molds.  All of the new molds were designed in AutoCAD. 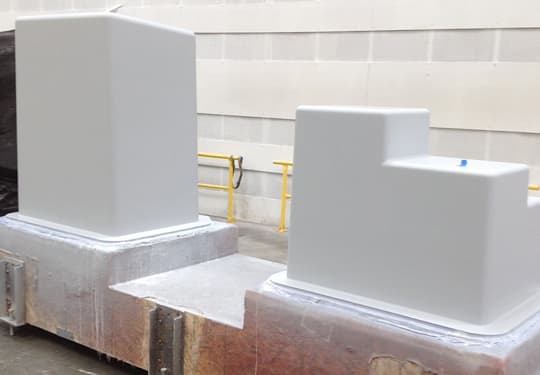 Above: The Northern Lite shower molds have been redesigned

We used a company in the United States to build the plugs.  They were CNC machine built and brought back to Canada.  Now the molds are being built in Canada. 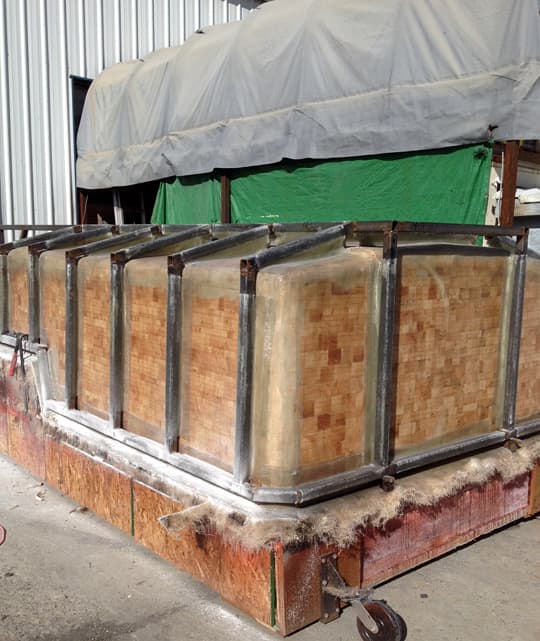 Above: The 9-6 mold being pulled off the plug at the mold builder facility in Canada

The 9-6 should be done this week, followed by the shower molds, and the 10-2 mold in a couple of weeks.  Everything should be done by our November date.

TCM: Did you take advantage of the opportunity to rework the molds?

Keith: The basic designs are the same, but both the 10-2 and 9-6 have been retooled.   We did some roof reshaping and reinforcements in areas like the air conditioner.  We were also able to widen the molds without exceeding 98”.

The new molds will also be more more aerodynamic.  Our campers were aerodynamic before, but now they will be even more aerodynamic.  By using 3D AutoCAD design, we were able to do some great stuff to improve the molds.  It’s pretty exciting seeing the plugs, and we can’t wait to see the first campers rolling off the line.  It’s all looking good.

Above: A video of the 9-6 mold plug being CNC routed in the United States

TCM: Did you visit the plug manufacturer in the USA before or during the CNC cutting?

Keith: Dad and I were down in the United States and watched them do cuts on the 9-6 top plug, which was interesting to see.  In the video you’ll see the machine starting the cut. 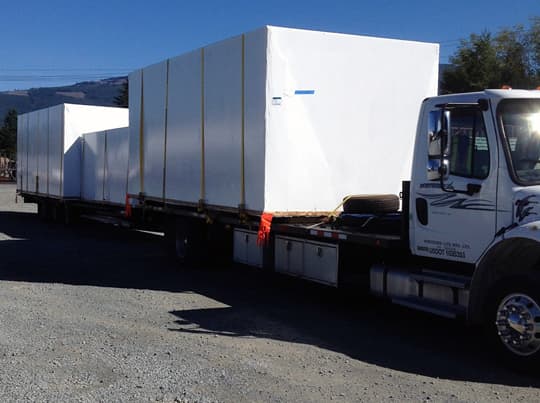 Above: The plugs being shipped back to Canada

TCM: Have the new plugs been shipped to Canada yet?

The 10-2 is slightly longer than the previous model.  We are calling it the 10-2EX, meaning “extended” since it’s going to be a little longer than the older 10-2 series.  We wanted to differentiate the molds and models.  The series will stay the same, and we’ll still have the CD Special Editions.

With the EX, we’ll be able to make changes like adding pantries and other storage changes within the units.  The basic floor plans will stay the same.  There will be some other changes with the extra room.  We will be able to do more.

TCM: When do you hope to see the first Northern Lite come off the new production line?

Keith: The first Northern Lite will come off line at the end of November.  We will have new fabric and graphic options.  There’s a lot more to come.

TCM: Will the first campers go to the folks who had factory orders when the fire struck?

Keith: Yes, the first units will go to customers who had campers on order when the fire occurred.  Then we’ll build dealer inventory for the upcoming RV show season. 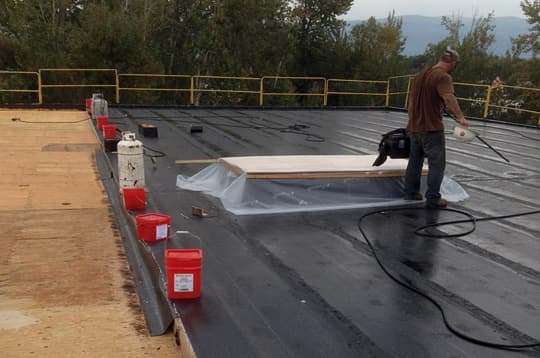 Above: Torch Down roofing being installed at the new Northern Lite factory last week

TCM: Congratulations on the progress so far.  We’re very happy for you and the Northern Lite team.  Is there anything else you want to share about the new factory or redesigned campers?

Keith: Our new AutoCAD designed molds are allowing us to do things we weren’t doing before and have given us the opportunity to look at things and make changes.

Reworking the building gave us the opportunity to improve efficiencies and make it a really nice work place with better ventilation, bright colors inside, state-of-the-art lighting, and 19.5’ ceilings.  We also added to the size of building so everything can be done inside.  It will be a more comfortable working environment for every position within the building.

The initial fire was very horrific and stressful for our family, staff, and dealers, but we had to make positives out of it.  In the last three to four weeks we have seen the building come together.  It’s been very impressive and exciting to see the building take shape.  The changes have happened so rapidly.  We’re getting very close to completion.

For more information on Northern Lite campers, visit their website at northern-lite.com.