A few days before we were to set out for the 2013 National RV Trade Show in Louisville, Kentucky, an unexpected box arrived.  Long time Truck Camper Magazine reader Kevin Pinassi had just sent us the perfect Christmas present.  His timing was impeccable.

Emerging from the box was a premium die-cast demountable truck and camper rig, at 1:24 scale.  The truck is a blue 1966 Chevy C10 featuring a regular cab, single rear wheels, and two-wheel drive.  For those who know, this is the truck that brought independent front suspension, drop center ladder frame, 4-speed synchromesh manual transmission, and a 327 inch gas V8 to the industry.  She’s a real beauty. 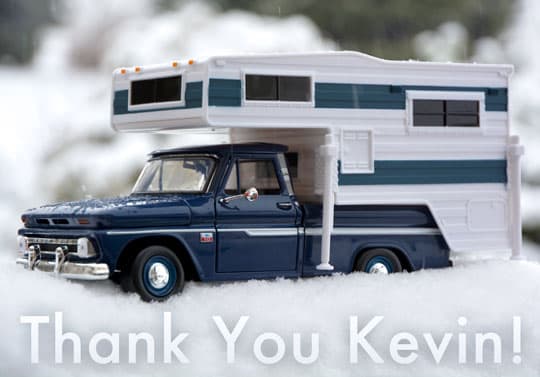 The no-name camper is a hard side, non-slide, most likely with a wet bath.  Although we’re concerned that this camper is probably overloading the half-ton C10, we’re impressed with its detail, and 100% wood-free, 100% plastic assembly.  Whatever the make or model may be, the camper was clearly way ahead of its time.

With evil grins, we packed our new truck camper rig and drove to Louisville.  The industry had no idea what we were up to.  They would soon find out. 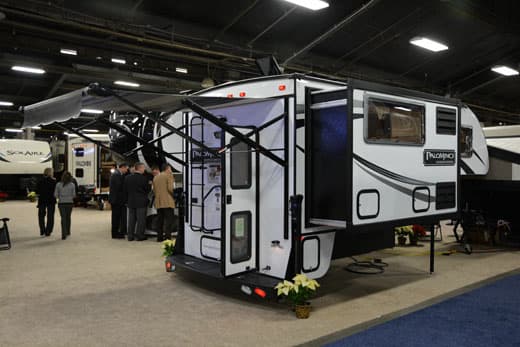 This year the Palomino RV team finally had their priorities straight.  Set-up right at the front entrance to their sprawling booth was their new 2014 Palomino HS-2911.  That’s right, put the fifth wheel and travel trailer stuff somewhere in the back.  Truck campers come first.  Everything else can go somewhere else, if there’s room. 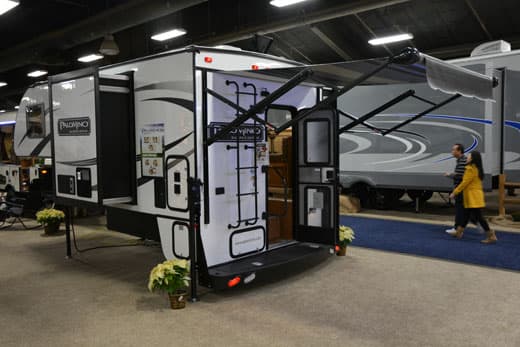 Walking around the HS-2911, it’s impossible to ignore how far Palomino has pushed into the luxury truck camper market over the past few years.  Just three years ago Palomino didn’t even have a slide-out model.  Now they have three; the HS-2902, HS-2910, and the new double slide HS-2911. 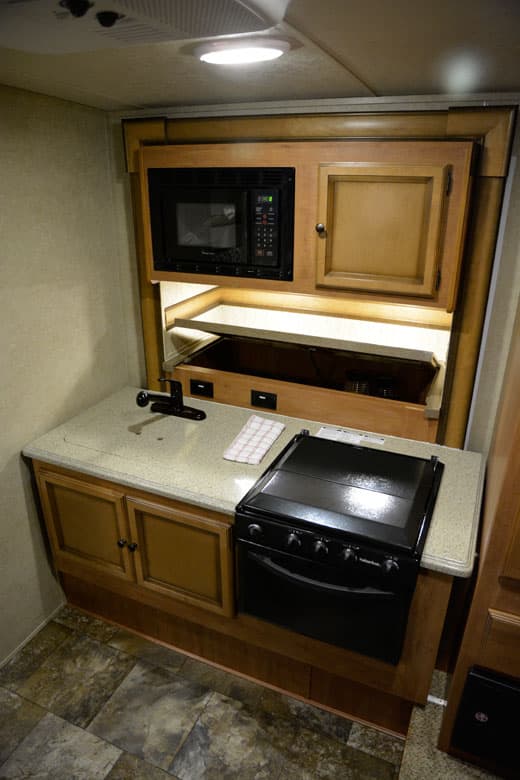 The kitchen slide in the HS-2911with under counter lift-up storage. 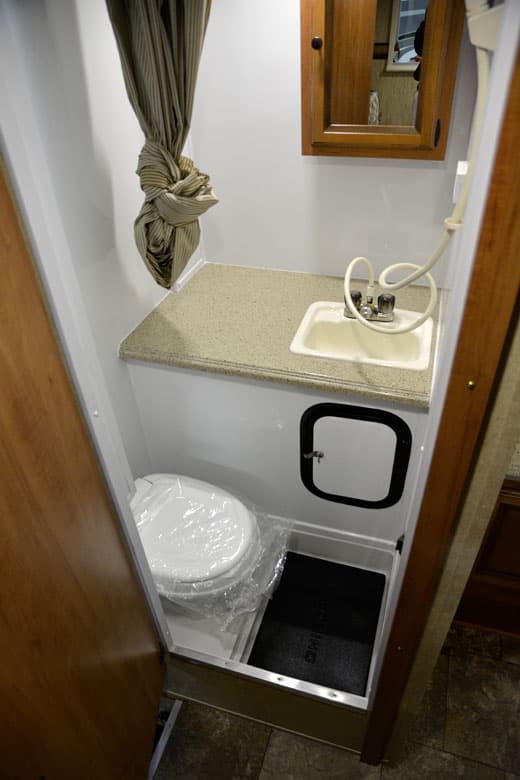 Not quite as front and center as the HS-2911, we found an example of Palomino’s new line of pop-up truck campers; the 2014 Palomino SS-550.  We are working on a formal new announcement for the SS-550 now and will publish more photography, complete specifications, and a floor plan for the new camper in January.

In the mean time, we have a sneak peek at some of the features Palomino has announced across the board for its 2014 pop-up camper line including the new Rieco-Titan roof lift system and key fob remote control, lower profile roof, one-piece sidewalls, 55” one-piece entry doors, upgraded heavy duty soft wall, power port, detachable power cord, and standard battery disconnect. 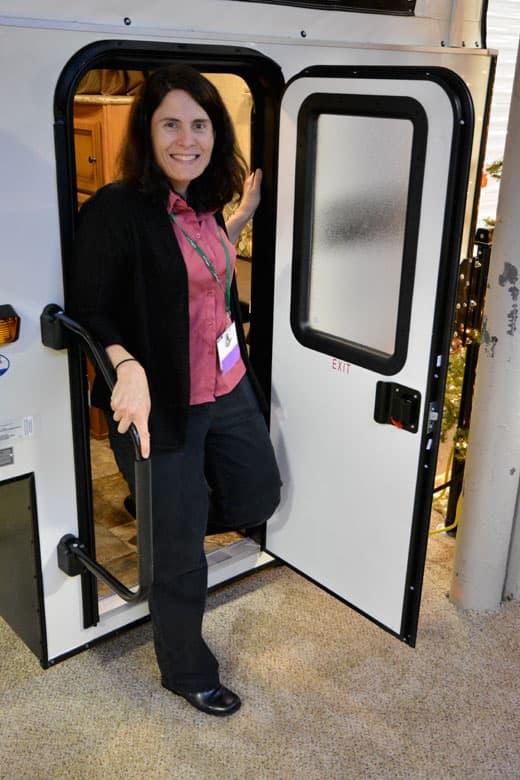 The new 55” door is a huge improvement over the old two-piece doors. 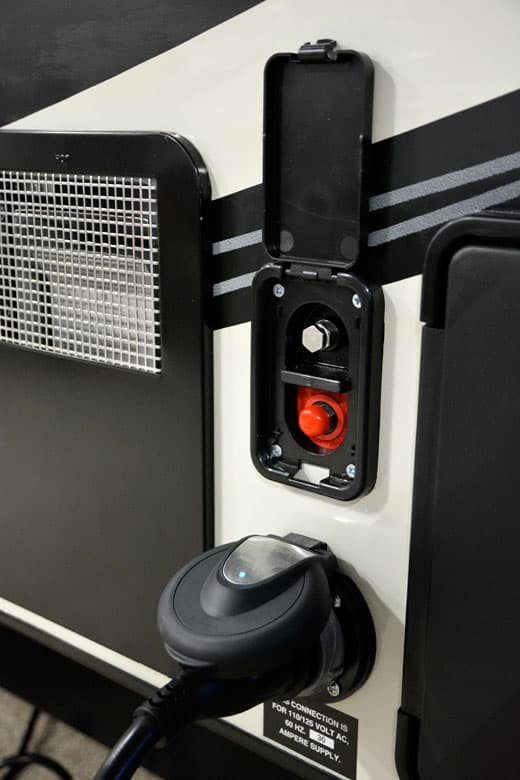 We will have a formal new camper announcement complete with more photography, specifications, and floor plan for the SS-550 in an upcoming edition.

We bumped into Jay Taylor, General Manager, and Candice Boutiller, Director of Marketing for Torklift International in the Roadmaster booth on day one, but never managed to connect with them again throughout the show.

This may be a familiar experience for anyone who has attended a major trade show with thousands of people spread out over tens of thousands of square feet and displays.  There are industry leaders who attend Louisville every year that we never see, year after year.  Other attendees tell us, “Oh yeah, they were just here.”  Sure, sure.

If you think that’s funny, after six years of attending the darn show, I still get lost in the multi-building labyrinth.  It’s as if walls and doors move, or change where they lead to.  Sometimes I think Louisville is an episode of the Twilight Zone.  Seriously. 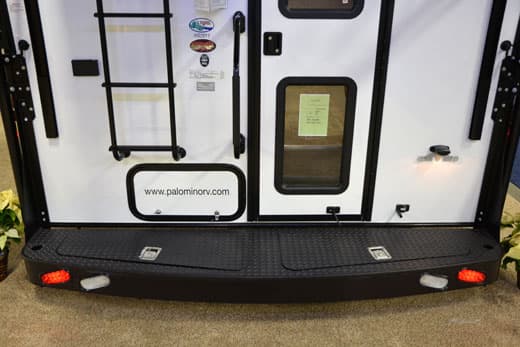 Getting back to reality, we were able to check out Torklift International’s new Palomino RV bumper in the Palomino booth, aka the Landing Pad.  In fact, said bumper was quite firmly attached to the new 2014 Palomino HS-2911.  I know it was firmly attached because (a) I bounced up and down on it and it didn’t move and (b) Angela tried to steal it.  Did I mention that Angela really likes this new bumper?

At first, I had some difficulties closing the two top storage compartments as the mechanical auto latch takes a bit of practice.  After lifting the compartment door, it automatically stays up and in place.

To close the door, you need to lift it up and pull it towards you to release and lower it back into position.  The auto latch is a clever system designed to last as long as Torklift’s Lifetime Warranty.  Just give yourself a few moments to get the swing of it.

Upon close inspection, we were very impressed with Palomino RV’s Landing Pad bumper.  It’s all-aluminum structure was solid, the fit and finish was excellent, the LED lights and lockable steel latches were top-notch, and the functional versatility this bumper presents is truly ground-breaking.  Now that we’ve seen the Landing Pad, it’s hard to imagine the 2014 Palomino HS-2911 without it.  I tried to steal it too.

“But wait, there’s more!”  Like a late night infomercial, the Palomino RV truck campers kept us coming back.  This time we returned to the 2014 Palomino SS-550 to check out the Rieco-Titan lift system and the key fob remote. 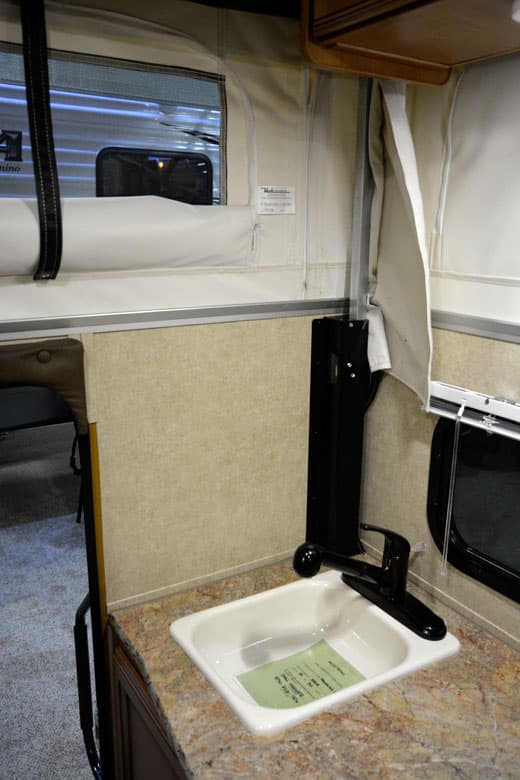 The lift system itself works with a series of small linear actuators that allow the system to be virtually invisible inside the camper.  The vertical bars that lift and lower the roof even have fabric covers built into the soft wall.  Once the roof is lifted, these covers velcro into position completely hiding the vertical bars. 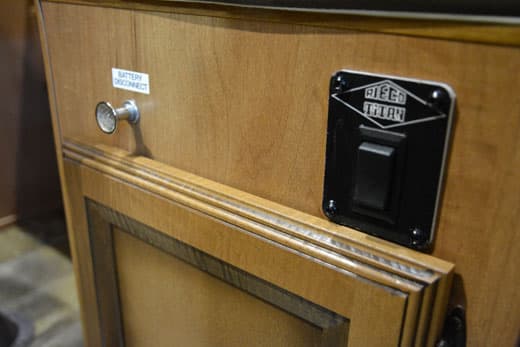 We really appreciated the electric lift system rocker switch immediately inside the rear door.  With a permanently installed switch, you’re not going to lose the key fob remote and not be able to lift and lower your roof.  We also really appreciated the standard battery disconnect switch, also just inside the rear door.  Someone at Palomino is getting in-tune with the truck camping lifestyle, and it shows.

The key fob remote is exactly what you would expect it to be, an automotive style mini-remote designed to fit on your truck camper key chain.  In the hand, the key fob was robust for its size and easy to understand.

Bob McCarthy, President of Rieco-Titan Products, explained that the key fob is a learning remote.  If you lost the key fob, or if it fell into your morning coffee, you could replace it with a new one, and have that new key fob “learn” the frequency of your existing lift system.

Doug Bakker, Product Designer for Rieco-Titan Products, added that the key fob remotes all had unique frequencies preventing adjacent Palomino truck campers from lifting and lowering each other’s roofs.  He also said, if you call now, he’ll double your order on Rieco-Titan key fob remotes, but only if you’re wearing a Snuggie washed in OxiClean.  Just kidding. 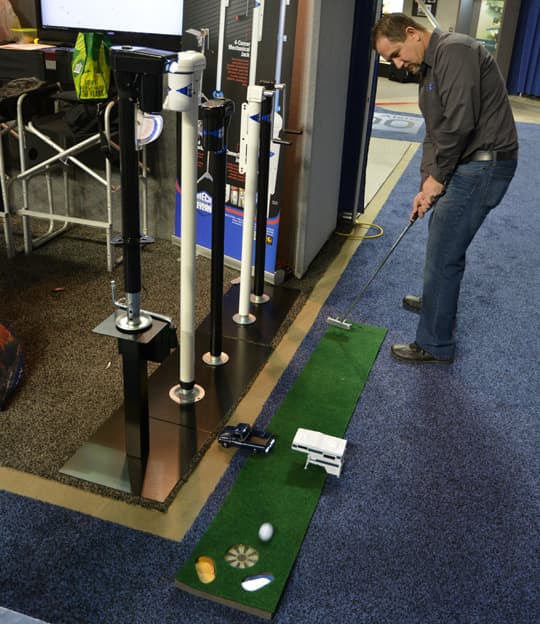