By mid-day on the third and final day of Louisville 2013, our Mini-Golf Tournament was in full swing and everyone was talking about the weather.  Smart phones, laptops, and display monitors were all trained on Winter Storm Cleon as it approached Kentucky promising ice, snow, and long delays home.

Did we pack up and head home to avoid this wicked weather?  No sir.  We’re Truck Camper Magazine, a four-season ready publication that can go anywhere, publish anywhere, and host mini-golf tournaments where other media outlets wouldn’t dare.  Bring it on Cleon.  The 2013 TCM Mini-Golf Tournament must go on. 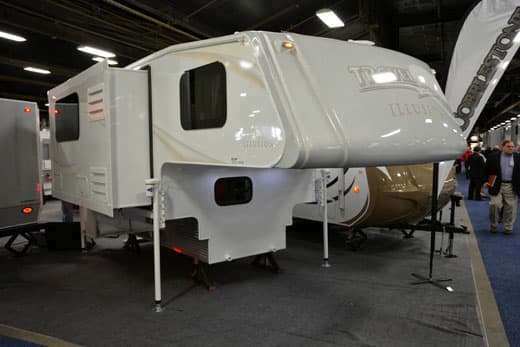 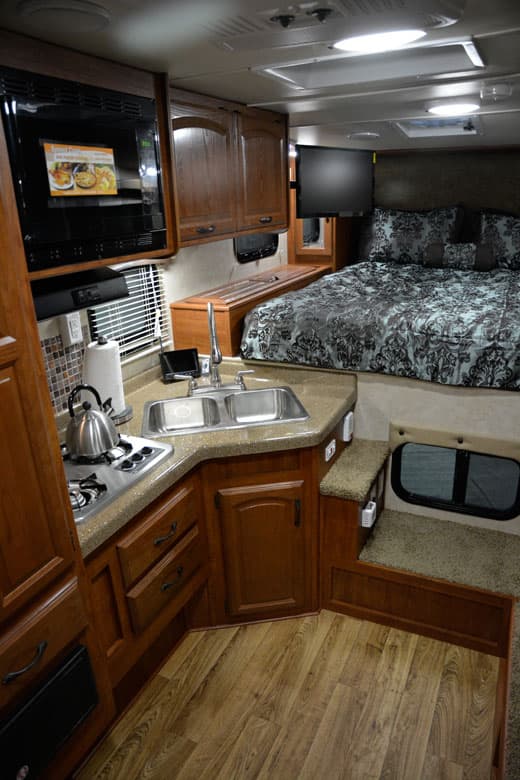 Above and below: The interior of a 2014 Travel Lite 1000-SLRX Illusion 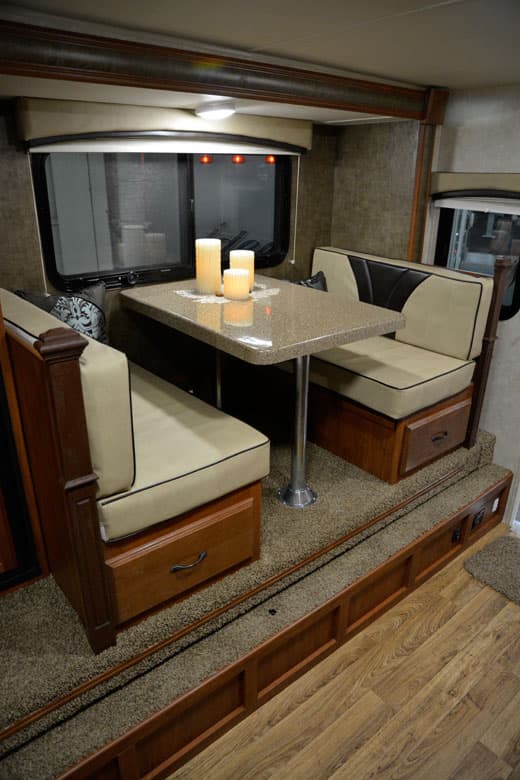 The concept of the Illusion series is simple; to offer a high-end luxury truck camper that comes fully-loaded, at a very competitive price.  Dustin Johns, President of Travel Lite, gave us a long list of standard features stating, “The only thing that’s not standard on the Illusion series is a propane generator.  Everything else is included.” 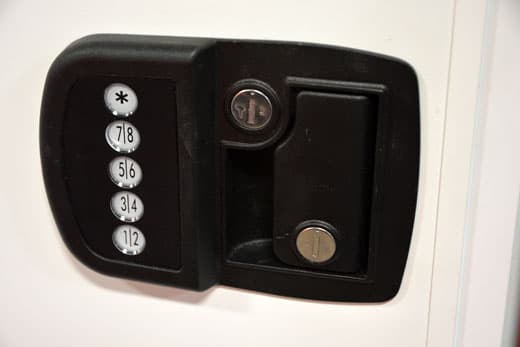 There’s more.  To the best of our knowledge, some of the standard features of the Illusion series are truck camper industry firsts including the thermal-foil wrap to improve insulation, electric keyless entry door (see above), and LED loading assist strip lighting under the cabover nose.

We’re particularly interested in the foil wrap, a product Dustin likened to the insulation wrap used on residential home construction.  Dustin explained that the foil is used in the roof, floor and sidewalls to create a 360-degree insulating wrap in the Illusion series.  Since we couldn’t see the material, we asked Dustin for pictures, but so far we’ve been foiled.  It’s a joke – “foiled”, get it?  Geez, tough crowd. 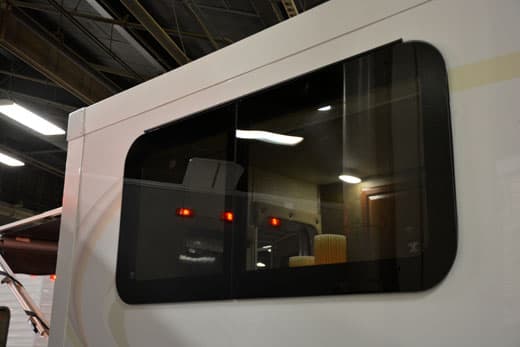 If Travel Lite stopped there we’d have ourselves some exciting new campers, but there’s even more.  We were very excited to see thermal pane frameless windows on the Illusion models giving the exteriors a modern aesthetic. 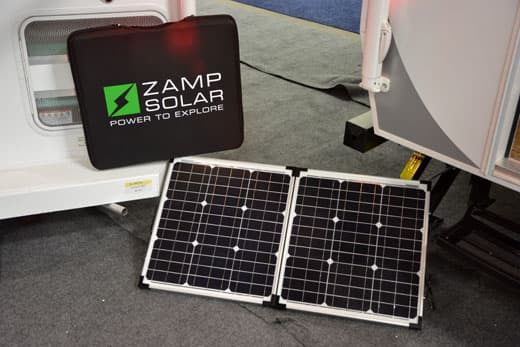 And then there was another surprise; a standard 80-watt portable solar panel.

Lance Camper was a big tease at Louisville this year.  After a dizzying number of updates for 2013 including a new front nose cap, solid surface countertops, all-LED lighting, and the popular 1172 double-slide, the Lancaster, California company has been quiet on 2014 announcements. 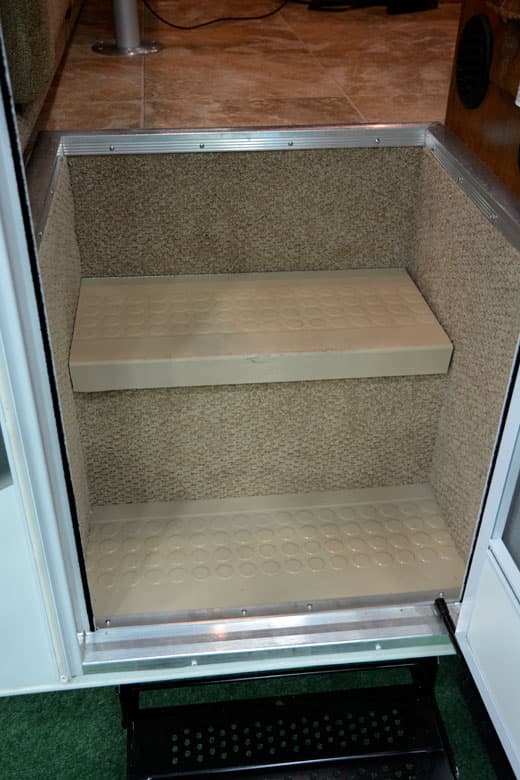 Above: There’s a mid-year update hiding under the stairs of the 2014 Lance 1172; the new battery location.

Putting on our we-can-be-annoying hats, we asked everyone in the Lance booth at Louisville the same question, “So, what’s new for 2014?” 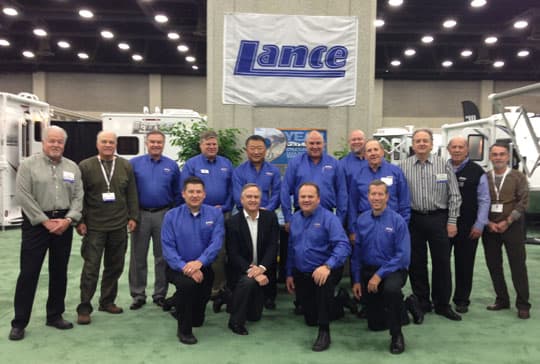 Above: We asked just about everyone in this photo the same question.

The answers we got were two fold.  One, not much.  And two, big things are coming soon.  When we pressed them on exactly what’s coming soon, they got quiet again.  Always a tease.

We did manage to learn about a few mid-year 1172 updates that somehow never made the esteemed electron pages of TCM.  First, the 1172 got a small sofa table suitable for laptops.  Second, the sofa has a recliner with foot rests that can convert into a jack knife bed.  Third, the 1172 now sports exterior storage in the rear skirt.  And fourth, the batteries for the 1172 are now located under the entry steps. 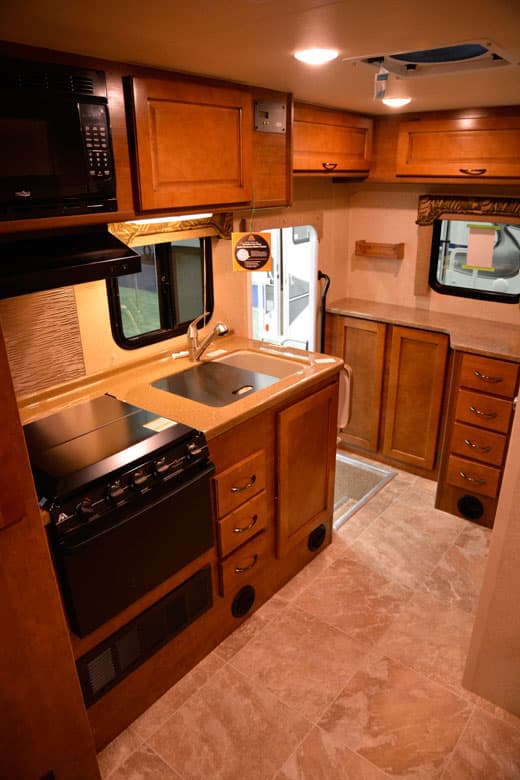 Above: We also discovered darker and richer drawer pulls in the 2014 Lance 1191

We have it on good word that Lance will make it up to us early next year with at least one major announcement, possibly two.  Don’t forget to call us, Lance.  We’re waiting! 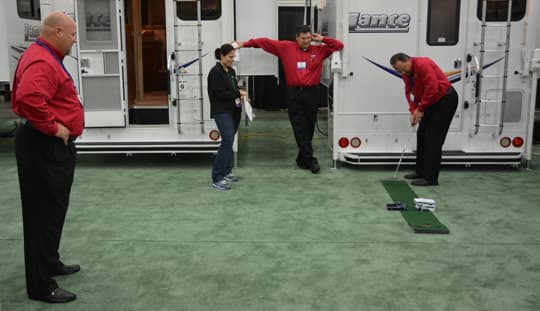 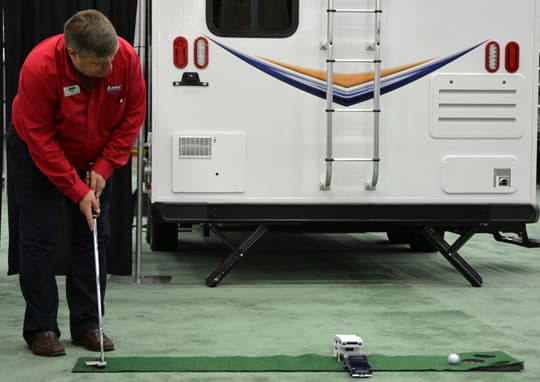 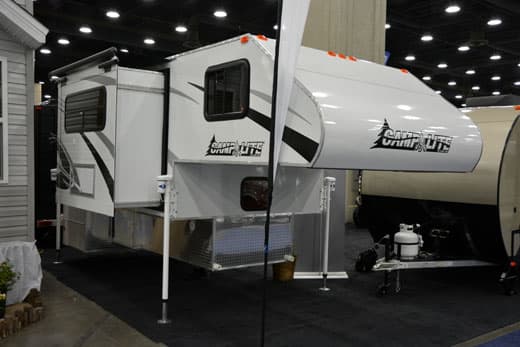 LivinLite had a 2014 CampLite TC11 on display, the camper that blew everyone away last year with its split dry bath floor plan and CampLite’s first slide-out. 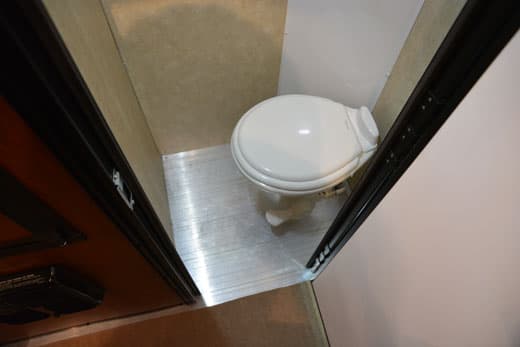 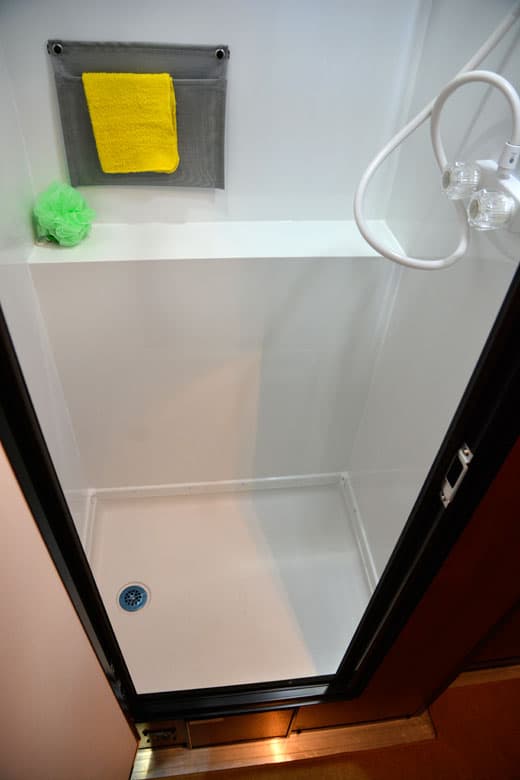 Rick Barna, Vice President of Dealer Relations, explained the CampLite updates for 2014.  First and foremost, the TC11 is now available with an optional four-season package.  The four-season package includes a heated basement, 12-volt heating pads on the holding tanks, thermal pane windows, and a second layer of Azdel composite on the side walls for insulation. 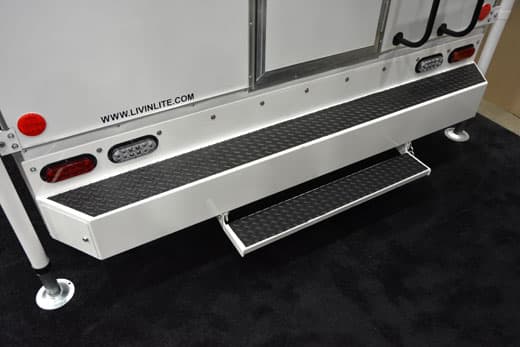 A seven cubic-foot refrigerator is also now available as is a new aluminum bumper step.

The original all-aluminum and composite, wood-free LivinLite concept continues to be the main draw for CampLite truck campers.  That said, we are always impressed with the advancements in aesthetic warmth and comfort CampLite brings to the table.  Anyone who’s interested in the concept of a wood-free truck camper should give CampLite a serious look.  They’ve come a long way, in a very short period of time.

We had a great conversation with the Roadmaster team that reminded us of the laundry list of Roadmaster products that work well with truck camper rigs; anti-sway bars, suspension and steering products, tow bars, mounting brackets, braking systems, tow dollies, towing protection products, and towing accessories.

Roadmaster’s tow bars and supplemental breaking systems are especially well suited for any truck camper rig that tows an automobile.  According to our last reader survey, that’s exactly 18.2% of our readership, a percentage that seems to grow every year. 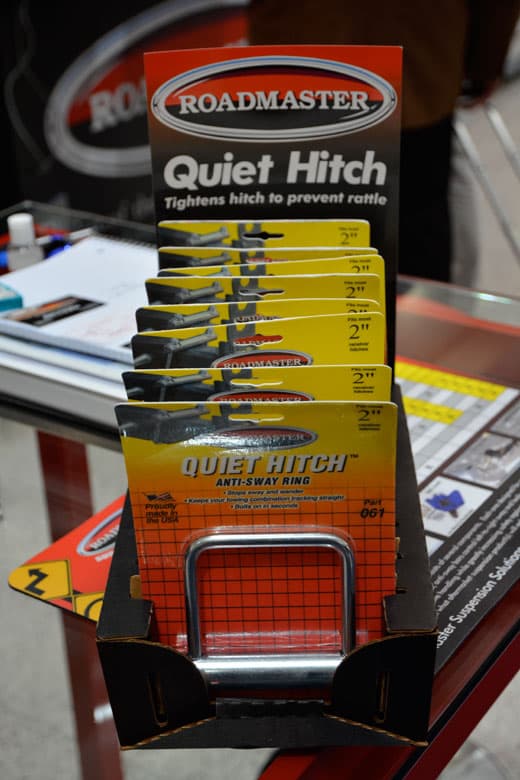 Speaking of towing, one of these days we’re going to borrow a Jeep and tow it with a truck camper to Moab for some serious off-road fun.  Hopefully we’ll live to tell the tale, but it’s low on the bucket list just in case.

Announcing the Winner of the 2013 TCM Mini-Golf Tournament

After the last putt was putted, there was no doubt who had won the 2013 TCM Mini-Golf Tournament.  If his “friends” hadn’t intervened, I think we might still be there in Louisville watching him sink hole-in-one putts, one after another, like some kind of golf putting machine. 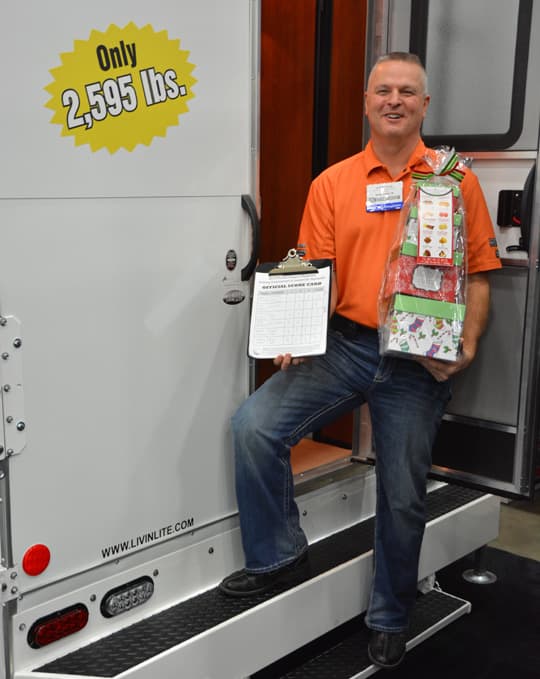 Above: With 19 hole-in-one putts, Rod Lung was the clear winner.

Congratulations Rod Lung of LivinLite RV for your first place win!  Your prize is the biggest, most ridiculous food gift item we could find at Costco.  We spared no expense.