For part two of our 2012 Louisville coverage, we check out the new Travel Lite 770 pop-up truck camper, finally see the 2013 Lance 1172 double slide for ourselves, try out a new accessory-ready remote by Rieco-Titan, get an update on the FuseMaster and InvisiBrake from Roadmaster, and continue the breath taking competitive drama that is the 2012 Truck Camper Magazine Bowling Tournament.

This floor plan manages to squeeze a lot of functionality into a small footprint by utilizing a European-style mid-camper dinette, an east-west overcab bedroom, and forgoing a traditional bathroom in favor of a porta-potty “room”.

Larry Johns, President of Travel Lite, explained that the 2013 Travel Lite 770 pop-up truck camper is designed for use off the truck standing on it’s four Rieco-Titan jacks.  He also pointed out the new radius front nose of the 770 pop-up which features a refreshed Travel Lite logo.  Inside Larry was sure that we noticed the one-piece fiberglass kitchen countertop.  It’s a sharp looking camper.

The rest of Travel Lite’s line up has some nice 2013 updates including fresh fabrics, new wrap-around fiberglass nose caps on the larger hard-side models, and new slide-out bulb seals on the 2013 Travel Lite 900SBSL Ultra and 1000SLRX Ultra models. 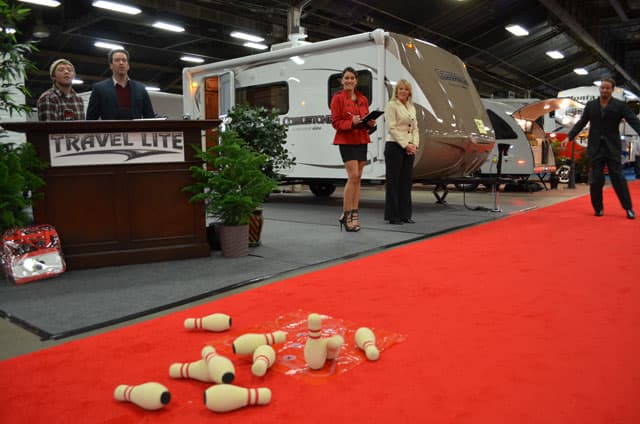 Above: Dustin Johns, Vice President of Travel Lite, was a serious bowling contender

It’s not exactly breaking news anymore, but Louisville was the first time Angela and I had ever seen the all-new 2013 Lance 1172 double slide truck camper.  After having seen the floor plan months earlier, and Princess Craft’s walk through video just two weeks ago, there were no surprises, but the camper didn’t disappoint.  For anyone who’s been waiting and waiting for Lance to come out with a double slide model with a sofa slide, you’re going to love this new camper.

Compared to its direct competition, Lance took a much more conservative approach with some of the macro design elements of the 1172.  For example, the basement floor of the camper is built to the wheel wells, not the much higher bed rails.  The fresh tank is also more conservative compared to the competition at 42 gallons, but the grey and black tanks are slightly larger at 35 gallons and 35 gallons.

As a result of this more conservative approach, the inside floor space of the camper is not as wide as competing models with the same floor plan, but it’s a few inches longer and offers more ceiling height. 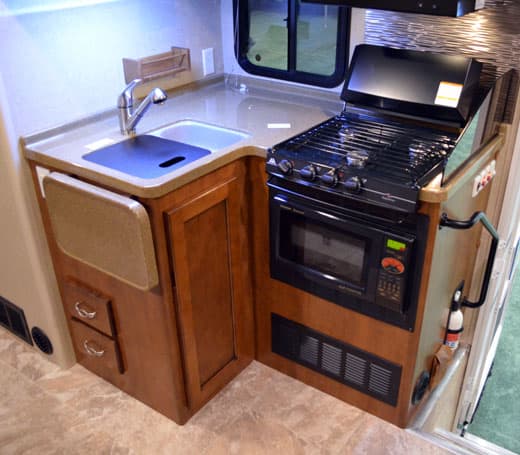 No matter how you slice it, this is the biggest Lance Camper ever made and, for 170 to 185 pounds more than the 1181 or 1191, the rear sofa slide is a serious crowd pleaser.  We want to spend some more time with the 1172 to get a better feel for the real-world usability of space, storage, and overall functionality, but we are impressed.  If you have enough payload to handle about 4,715 pounds (wet, with options, and loaded with cargo), put the 1172 on your shopping list.

Lance didn’t bring any other new models, but did have their full line of truck campers on display.  For an in depth article on their 2013 changes, check out, “TCM EXCLUSIVE: 2013 Lance Camper Announcements”. 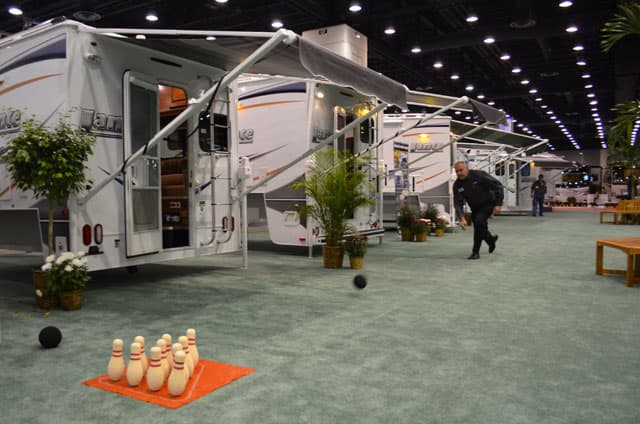 For the record, we have never once heard of a camper tipping over because people were in the cabover (no matter what they were doing), but Rieco-Titan’s new product will certainly add a reassuring margin of safety and keep the camper steady.

Bob McCarthy, President of Rieco-Titan, and Doug Bakker, Rieco-Titan’s Product Manager, were eager to show off their mechanical to electrical jack conversion kit.  Essentially, it’s a kit that allows you to convert manual jacks to remote control electric jacks. 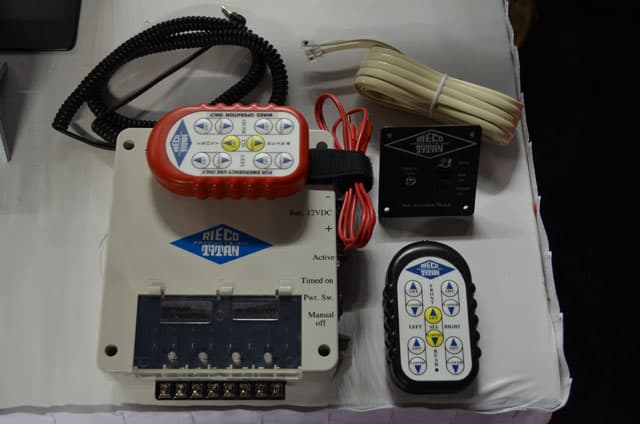 Based on the demonstration Bob gave us at the show, it’s a relatively straight forward conversion process, but we suggest calling Rieco-Titan with your application before ordering the kit. 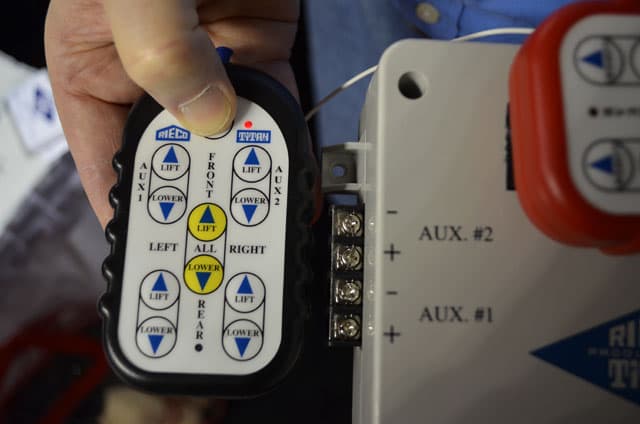 Rieco-Titan’s electric jack remote control and receiver system has also received an exciting update; the ability to remotely control slide-outs and pop-up roof lifts.  Bob made sure to demonstrate the safety of this new feature by showing us how a user needs to hold the remote control accessory button for five seconds until an LED light on the remote goes red.  “This is a very deliberate action people are not likely to do by accident” explained Bob.

Representing Rieco-Titan for the 2012 TCM Bowling Tournament was Bob McCarthy, President, and Doug Bakker, Product Manager.  Here are their scores:

Roadmaster did not bring anything new for the truck camper market to Louisville, but they were very happy to report success with their FuseMaster and InvisiBrake products.  If you tow a vehicle behind your truck camper, these two products should prove indispensable to make towing easier, more convenient, and safe. 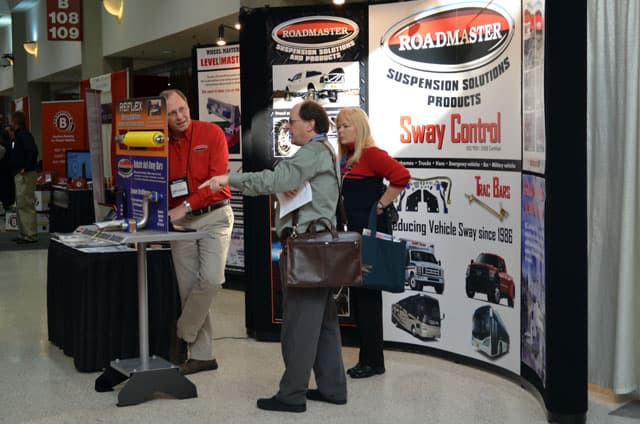 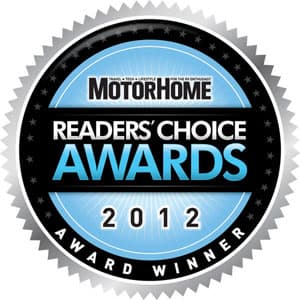 At the end of the day, the winner was clear.  Ben Meloche of Palomino handily beat the competition with a near perfect score of 78.  Best of all, Ben did it while eating a sandwich.  That’s right, a sandwich.

Above: Ben Meloche bowls a near perfect score while eating a sandwich

When Angela and I showed at the Palomino display up to give Ben his prize, there was no Ben to be found.  Ben had been sent home.  That’s when Angela and I decided that you had to be present to win the Truck Camper Magazine Bowling Tournament.  Were we making up the rules as we went along?  You bet!  Sorry Ben.

Taking another look at our tournament scores, we went to our number two top scoring competitor, William Hill of Lance Campers.  Quickly Angela and I darted to the Lance booth and found William lounging in something called a, “travel trailer”.  When we told him he had won the first Truck Camper Magazine Bowling Tournament, by default, he did this: 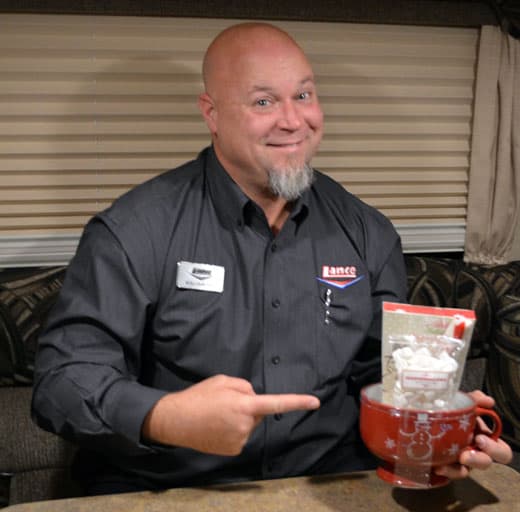