Anyone who has ever worked or attended an industry trade show understands the physical stress such an event places on the human body.  After three days of walking and standing on concrete and overly cushy carpeting, the feet are ready to resign, the legs are preparing to strike, and the back is well on its way to quitting.

To add insult to injury, the last few hours of a trade show are almost always mind numbingly slow as most attendees have long since hit the exits to fly, drive, and whistle dixie all the way home.  For the poor stragglers left behind, the final countdown of hours, minutes, and seconds is nothing less than excruciating.

This was our fifth year attending the annual National RV Trade Show in Louisville, Kentucky.  Most of the RV industry read that last sentence and scoffed, “Rookies!”.  It’s true, we are still the new kids at an event that just celebrated 50 years.  Louisville is an institution, a tradition, and something of an industry family reunion, all wrapped up into one.  That said, it’s still a trade show and suffers from the dreaded last day trade show slow down that can make grown adults glaze over and cry out in agony.

On the ten hour drive home from last year, Angela and I were quite concerned about what we had experienced during the final moments of Louisville 2011.  As we walked the convention center to say our goodbyes, the truck camper manufacturers looked like those videos where the baby is trying desperately not to fall asleep.  We had to break out a mirror twice just to see if a couple of sales reps were still alive.  One had literally fallen asleep head first into a bowl of peanut M&Ms.  When we woke him up he said, “No mom, there’s no school today”.  It was that bad.

Okay, that’s a slight exaggeration, but clearly we had to do something.  After all, we’re not your typical ho-hum media organization.  We’re Truck Camper Magazine!  We can bring the fun and make this show a party, right?  You bet your life we can.  And that moment, on that drive home, we decided to hold the first ever Truck Camper Industry Bowling Tournament at Louisville 2012.

That’s right ladies and gentlemen.  Truck Camper Magazine not only covered all the truck camper news fit for electrons at Louisville, we got the entire truck camper industry bowling too.  Set up those pins.  Let’s bowl!

Twenty-four months later, CampLite got the message and has made incredible advances.  No longer did Angela walk into the CampLite and exclaim, “No way!”.  This time she said, “This is really nice”.  Long gone are the monotone metal surfaces from ceiling to floor.  In their place are faux wood surfaces made from Azdel composite, carpeting on the floor, and other interior warming accents and touches.

Scott Tuttle, President of LivinLite, was beaming with excitement to show us this new camper, and quick to tell us everything he wanted to change in the prototype before us.  Specifically, he wants to use the darker Azdel and black aluminum trim shown in the another 2013 CampLite truck campers at the show.  With that change and a few other tweaks, Scott is confident this new model is going to rock some socks.

We still want the LivinLite team to address the sharp edges inside their campers, but we have to agree that the new dark faux-wood Azdel and black trim interior aesthetic is a knockout compared to the hospital grade decor of yore, and the slide-out and split bathroom in the new model is nothing less than a head turner.  At the rate CampLite is pushing foward, the rest of the industry had better start paying attention, and fast.

There’s an irony to this approach as it’s exactly what we want our truck camper leadership to be doing, but we also clammer for something new and exciting.  For the latter, Rex showed us his new countertops and table surfaces and a new arrangement in the hard side Northstar bathrooms. 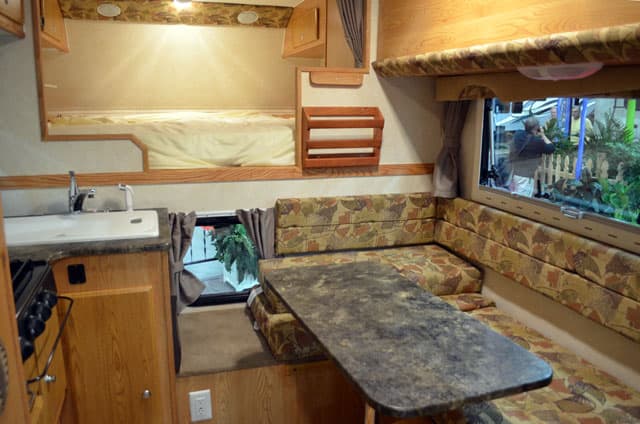 The darker table and counters are in line with the current aesthetic trend in RVs.  Above you can see the interior of the Northstar Camper.

The new bathroom moves the cabinetry from over the toilet to the side giving tall people more room when using the toilet and shower.  At 6’3”, this is a change I can appreciate.

On more than one occasion during the show, Rex lamented to us how he would have much preferred being on the production line pushing the quality and quantity of production forward.  He even told us how he’s giving every truck camper that comes off the line a final and thorough look over as he looks for more and more opportunities to improve.

Of course Rex didn’t let us leave without teasing us with a new pop-up camper he’s planning for 2013, but it’s not yet ready for debut.  Naturally he promised we’ll see it here first, in TCM. 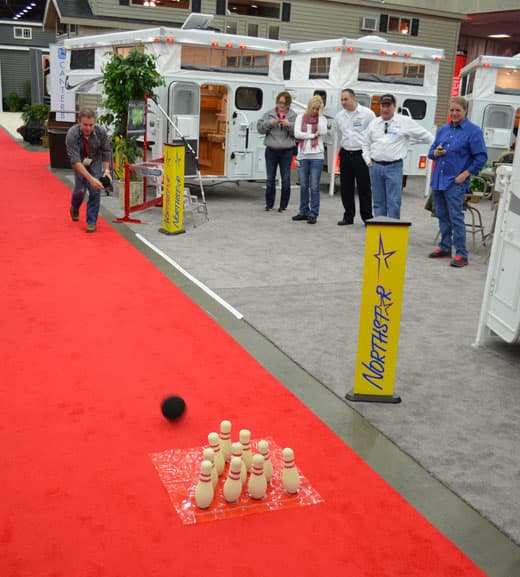 Above: Rory Willett, President of Northstar Campers, had excellent bowling form and was cheered on by Northstar and Torklift International team members.


Representing Northstar Campers for the 2012 TCM Bowling Tournament was Rory Willett, President, and Jenn Crooks, Office Manager.  Here are their scores from the three frame tournament:

Torklift International also happened to be in the Northstar display when we held the 2012 TCM Bowling Tournament.  Representing Torklift International for the 2012 TCM Bowling Tournament was Candice Boutilier, Director of Marketing, and Randy Fisher, National Sales Manager.  Everyone in our bowling tournament bowled three frames.  Here are their scores from the three frame tournament:

“Oh no, not another one,” we said looking with some disbelief at what appeared to be another version of the 2910.  Palomino first teased us with this new for 2013 Palomino Maverick Max 2910 full-wall slide-out truck camper at Hershey this past September.  We photographed that 2910 up and down, inside and out, from the rooter to the tooter, and were then instructed to hold the 2910 camper announcement and photographs so some final touches could be made.

Two weeks later we saw another version of the 2910 at the Forest River open house in Elkhart, Indiana.  The second 2910 featured a fantastic bronze and black exterior that gave the camper a much higher-end aesthetic than the white 2910 we had seen at Hershey.  Once again, we went to town and back photographing the 2910 only to be asked to hold the news for more revisions.

When we saw another version of the 2910 at Louisville, we kept the lens cap on.  I’d been fooled twice, and wasn’t about to be fooled again.  Angela and I had even started to use the numbers “2910” instead of the word fooled in our house, “Are you 2910-ing me again?”  I kid.

Sitting in the third 2910, Keith Fisher, Lead Engineer at Palomino RV, swore on a stack of virtual copies of Truck Camper Magazine that this was indeed the final 2910.  After checking for crossed fingers, the lens cap came off and we started taking notes. 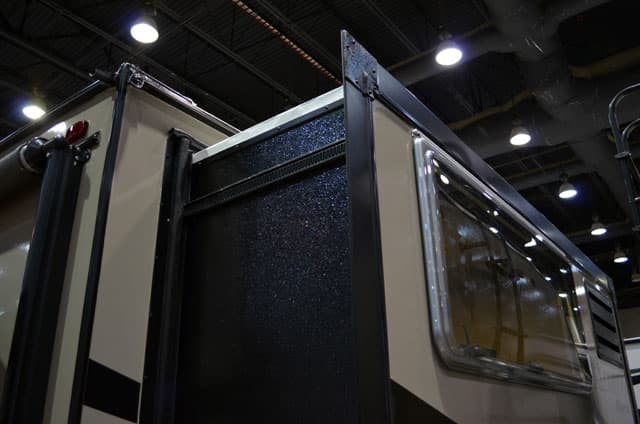 In a nutshell, the 2910 is a full-wall slide out Palomino hard-side truck camper with a wet bath.  The bronze and black exterior is the most distinguishing feature of the 2910, until you see the barrel roof. 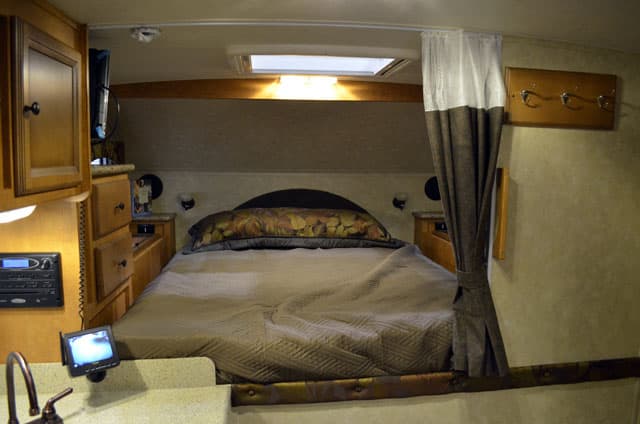 When you’re inside the 2910 the ceiling is curved and looks like the inside of a cut-away barrel.  The barrel roof gives the 2910 a more open and spacious feel inside.  In particular, the curved wood ceiling beam in the cabover is a real show stopper.

We will have a complete article and more photography of the 2013 Palomino Maverick Max 2910 in the near future.  It’s certainly impressive at first blush. 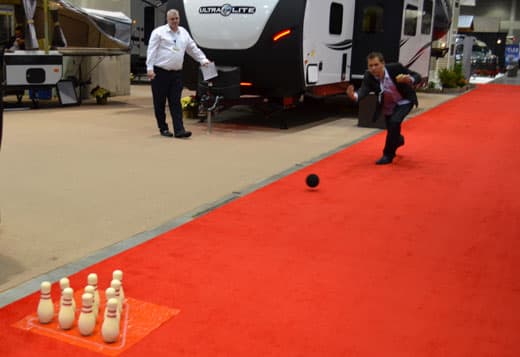 Above: Ben Meloche, a Palomino Regional Sales Manager bowling – note the sandwich in his left hand

Click here for Part 2 of our Louisville 2012 coverage that includes news from Travel Lite, Lance Campers, Rieco-Titan, Roadmaster, and the stunning edge-of-your-seat conclusion of the 2012 Truck Camper Magazine Bowling Tournament.