For Angela and I, the whole truck camper thing started in a used 2004 Lance 1030.  The camper was just a year old when we bought it and hit the road for a six-month cross country adventure that we will never forget.

To put it mildly, we loved that Lance 1030.  I know I’m supposed to be unbiased and objective in my reporting, but we literally fell in love with truck camping in that camper.  To us, the 1030 and everything we were doing was beyond our wildest of dreams.

Putting my objective hat back on, we were also so high on life during that trip that almost everything seemed wonderful.  But even with that caveat, we’ve often thought that the dry bath non-slide 1030 was a floor plan that needed to be revisited.  And we can’t begin to tell you how many Lance 1030 owners we’ve met who are equally passionate about their campers.  There has to be something to this, or maybe Lance put something special in the 1030 fresh tanks.  Whatever the case may be, we’re not the only ones who drank the 1030 kool-aid.  The Lance 1030 will always be a special camper to us.

We must have told the powers that be at Lance a hundred times, “Bring back the 1030”.  They would laugh and say, “Maybe some day”.  Well, some day has come, almost.  The new camper is not the 1030 in name, but it’s certainly the 1030 in spirit.  And this time, the time tested floor plan has some new tricks up it’s sleeve, including a dinette slide-out in the 1050S.

Check out our adventure with the Lance 1050S when Angela enters the Warrior Dash. 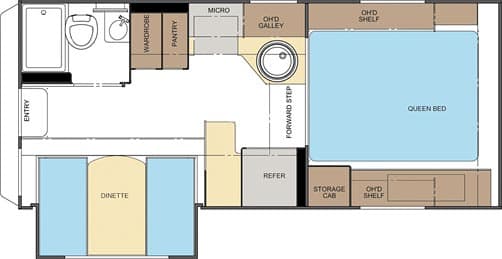 The following is an interview with Gary Conley, National Sales Manager for Lance Campers, about the 2011 Lance 1050 and 1050S.

Gary: There is currently a gap in the marketplace for a light weight, non-slide, dry bath truck camper that’s safe to carry on a single rear wheel truck.  To meet this opportunity, we have resurrected a floor plan that closely mirrors the Lance 1030.

Today, people are looking for lighter weight campers and are willing to sacrifice the floorspace of a slide-out to reduce the camper weight.  There is a huge demand for the floor plan and amenities that the 2011 Lance 1050 offers.

Gary: We named the camper the 1050 so that we wouldn’t confuse the older and newer models.  The 1050 is different than the 1030 in some very important ways.  The 1050 has a basement, solid wood cabinets, and an aluminum frame to name a few differences.  From a marketing perspective, we probably could have benefited from naming this camper the Lance 1030, but we wanted to point out the differences of the 1050, starting with a different name.

Gary: It was a goal.  We have hundreds if not thousands of ten foot Lance Camper owners traveling on single rear wheel trucks.  We know there are consumers reading your Newbie Corner who are learning the importance of safely matching a truck and camper.  With this in mind, we targeted to hit the same weight of the 1030, which is well within the payload of a properly specified three-quarter or one-ton single rear wheel truck.

Gary: The height of the basement in the 1050 is lower than the 1055, which means the tanks are smaller.  Let’s talk about weights.  By reducing the size of the tanks, we are helping the consumer to stay within the payload capacity of their trucks.  We have seen many customers fill their tanks and over-gross their trucks.  With smaller tanks, the 1050 is safer going down the road.  Additionally, the smaller basement reduces the height of the 1050, compared to the 1055, allowing for better handling and performance.

TCM: The 1055’s dry bath was a huge step up from the 1030’s dry bath and was arguably one of the better dry bathrooms in a truck camper during it’s run.  For the 1050, you have essentially the same size dry bath, but you’ve moved the toilet and eliminated a significant amount of counter space.  Why the change?

Gary: Again the answer is weight.  The 1050’s dry bath mirror’s the dry bath in our 1191 with a flat pan shower, which is a 100% usable shower floor.  Moving the toilet to the outside wall gives you more leg and elbow room.  We also have a bigger area for the toilet.  We put in a medicine cabinet and storage underneath the sink for things like your razor and toothpaste.  It’s all about the function.

TCM: Are you ducting heat into the bathroom like you were in the 1055?

Gary: Yes.  We are one of the only truck camper manufacturers that ducts heat into the bathroom.  That is a very important feature.  If you get up in the middle of the night, it’s nice to have a warm bathroom.  If you have wet clothes or bathing suits hanging in the shower stall, they will dry much faster with ducted heat.

There are six strategically placed heat ducts in the Lance 1050.  There’s one in the bathroom, one in the cabover, two in the living area, one in the basement tank area, and one hitting the dump valves.

Having six heat ducts also helps us to more efficiently heat the 1050.  In order to distribute the heat in a camper, you need to get the air circulating.  The more air flow you have, the faster the air gets into the furnace and distributes it.  The six duct heating system in the 1050 is a huge feature and a big improvement over the 1030.

TCM: While we’re on the subject of heat, tell us about the insulation in the Lance 1050.

Gary: We have R11 insulation value in the floors and ceilings and R9 around the perimeter wall.  With our new nose design, we have created dead air space on the front nose.  The cabover bedroom area is fully laminated and insulated.  We have a R11 insulation under the bed, and then carpeting material underneath.  On top of that you can get an optional insulated mat.  The insulation value under the mattress is far superior to what we had in the 1030 or 1055.  The 1050 also features a pillow-top Serta innerspring mattress.

TCM: Insulation values are important, but how are you getting around the liabilities of aluminum framing which can conduct heat, cold, and moisture directly into the camper?

Gary: Using SolidWorks and our CNC machines, we were able to design a wall that puts the whole aluminum frame inside a closed foam insulation envelope.  In other words, there is an insulated value between the aluminum frame studs and the outside wall.  That insulation eliminates the sweat and heat and cold transfer between the walls.

TCM: That almost sounds too good to be true.  Exactly how are you doing that?

Gary: Our CNC machines rout an area inside of our closed foam insulation that our welded aluminum frames are placed into.  Then the wall goes through a second step lamination process.  Once the wall has been through the second round of lamination, it’s routed to create a complete wall before it arrives on the production line.  I invite you to test out our new 1050 in cold weather.  We’ll get one to you to test before Spring.

TCM: That sounds like a plan.  Is the frame on the 1050 stuffed with wood?

Gary: We only stuff aluminum tubes with wood in areas where we fasten completely through the tubing, like where the rear bumper attaches to the rear wall and the front jack brackets.  Otherwise there’s no reason to stuff our frames with wood, because of the thickness of the size of wall tubing and the lamination process. Add this to our proprietary Lance Lock system that secures the transition pieces, like Legos.  The construction system we’re using is very similar to what Winnebago and other state-of-the-art motorhome manufacturers are using.

TCM: When we were at Louisville this past December, you talked about some new composite materials that Lance was experimenting with and testing.  Have you used any of these new materials in the 1050?

Gary: We eliminated all of the wood used as substraight under the fiberglass exterior on the 1050.  We now have a thermal plastic composite material underneath the fiberglass.  The whole unit, including the roof, is aluminum framed with a R9 high density foam as the underlayment.

TCM: Since we’re talking about a camper that was inspired by the 1030, one thing that immediately sets the 1050 apart from the 1030 is the lack of a front window.  Why can’t Lance figure out how to have a front window that doesn’t suffer from the water intrusion and insulation problems that often plagued front windows?

Gary: We could figure it out.  The problem is that our competition would put us on the defensive if we brought back front windows.  Too many people suffered leaks or heard of people who had leaks with their front windows.

Now you can pop your head through an insulated Heki skylight in the cabover, an option that’s available for the 1050.  My wife and I like to camp on the beach and look at the ocean through a Heki skylight as we stand on the cabover bed. 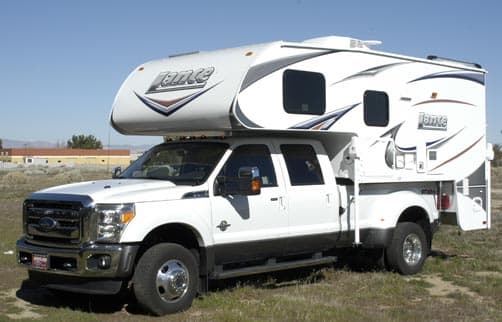 TCM: There are a lot of options today for customers who want a large non-slide truck camper.  What sets the 1050 apart in the marketplace?

TCM: Why doesn’t Lance offer a full-booth dinette in a non-slide model?

Gary: With the dry bath, it’s just not possible.  You lose six inches in the bathroom or six inches with the dinette.  It’s all a trade off.

TCM: The 1050 will also be available with a full booth dinette slide as the 1050S.  For the 1050S, you lose some counter space and interior cabinetry storage on the passenger side and gain a full-booth dinette slide-out.  What else differentiates the 1050S from the non-slide 1050?

Gary: Really that’s it.  The counter is smaller in length.  The return in the center is the same, but you lose six inches in the overhead cabinet and lose a window in that area.

TCM: When will the 1050 and 1050S be available for people to see at Lance dealerships and RV shows?

Gary: Both models have been in production for last three weeks and have been distributed the last week and a half.  You can see the 1050S at the Springfield RV show this weekend. 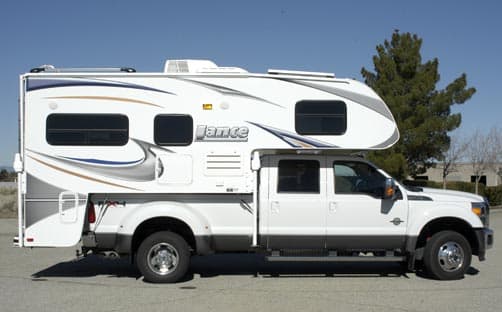 Gary: We’ll get it to you as soon as possible.  Then you can tell your readers what you experienced.  I’m looking forward to it.

Check out the Lance Camper Buyers Guide to see all models.  For more information on Lance Campers, visit the Lance website at lancecamper.com.  Click here to request a free Lance brochure.