Outside Magazine teams up with the RVIA and Lance Campers to produce a truck camping lifestyle video for the Go RVing Away campaign.  Lance Campers also tunes into an ESPN television event with Red Bull Rampage.

In May of 2017, Outside Magazine published an online article and video featuring fly-fishing guide, Maddie Brenneman, and professional photographer, Nick Kelley.  In the video, the young couple showcases a Lance 2017 Lance 1172 double-side truck camper and a 2017 Ford F350 Super Duty truck.

Launched in 1977, Outside Magazine is a multi-media powerhouse in the outdoor recreation marketplace reaching over 16-million people across print, web, social media, events, and television outlets.  For the truck camping industry, Outside Magazine can reach outdoor enthusiasts who may not currently have a truck camper on their radar, but are likely candidates for the lifestyle.

Following the run in Outside Magazine, the “Living On the Fly” video is now also being promoted as part of the Go RVing Away campaign.  We are particularly pleased about this move as the video is the first in Go RVing’s Away video series to feature a truck camper.

For the full story behind how Outside Magazine, Go RVing, and Lance Campers came together to make this video happen, we talked to Bob Rogers, Director of Marketing for Lance Campers.

TCM: How did fly-fishing guide Maddie Brenneman, Outside Magazine, Go RVing, and Lance Campers all get together to produce this video?

Bob: It all started with RVIA (Recreational Vehicle Industry Association) and their Go RVing advertising campaign.  As a result of their relationship, Outside Magazine approached the Go RVing team and asked about developing a video based on fly fishing and camping.  They contacted fly fishing guide, Maddie Brenneman, and came back to Go RVing about developing it.  Outside Magazine told the Go RVing team that all they had to do was provide a RV. 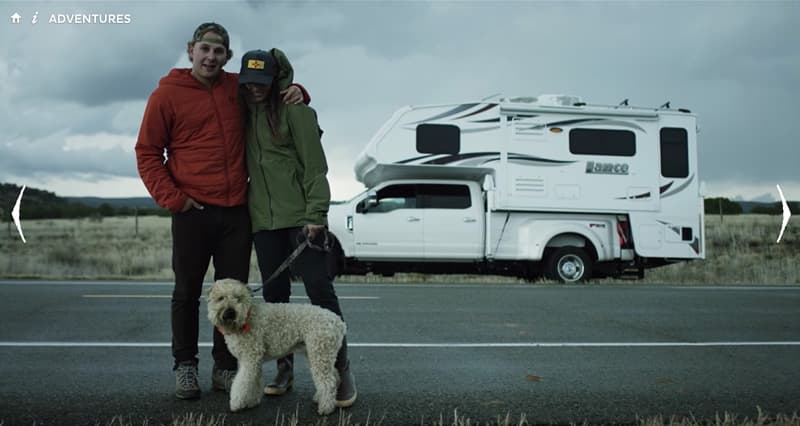 Above: Nick Kelley and Maddie Brenneman

Go RVing has about fifty events per year with a product showcase opportunity.  They’ll showcase RVs at music festivals, athletic tournaments, and other events.  When they have an opportunity, Go RVing puts out a bulletin to all RVIA members.  They might ask for a towable or a camper in this city at this time.  All RV manufacturers that are members get the opportunity.  The RVIA then selects what they believe is the best choice based on the opportunity and award that candidate.

As an avid fly fisherman who regularly uses a truck camper while fishing, I responded to the opportunity enthusiastically.  I knew that it was the perfect opportunity for a truck camper.  They wanted something that could go on two track dirt roads in the mountains and travel in all kinds of weather. 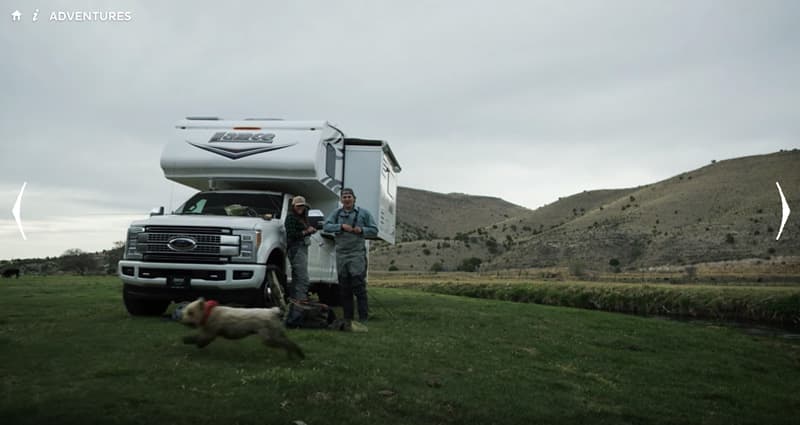 For this opportunity, they needed to camp in the unit.  Manufacturers don’t like to do that because then the unit is considered used.  We have a small fleet of trucks and campers for media and employee loans.  I had a 2017 Lance 1172 that I offered them and told them that they could use everything in it.  I submitted it and we got awarded the opportunity. 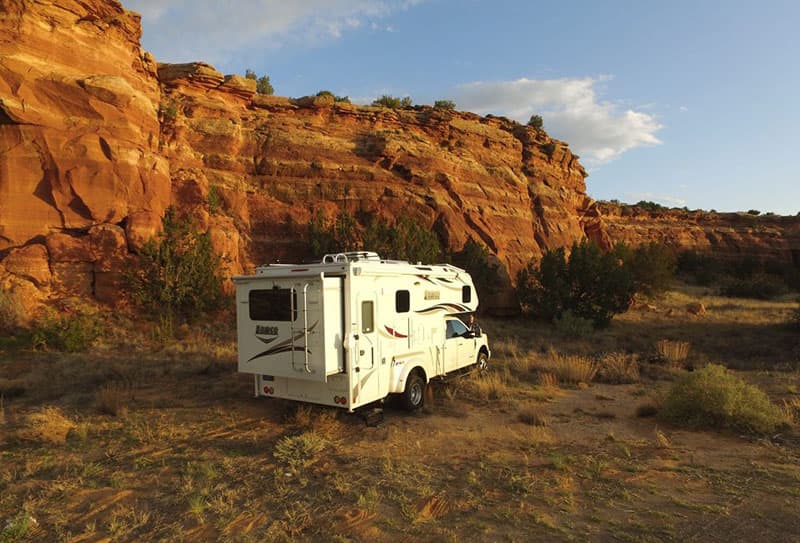 The video shoot was in Santa Fe, New Mexico, which is also where Outside Magazine is headquartered.  They needed the camper for a week.  I drove from Lancaster, California to Flagstaff, Arizona spent the night, and then finished the drive to Santa Fe and dropped it off.  I did a full walk around with the people taking it out so that they knew how to use everything.  Then, I hopped on a plane back to Lancaster.  A week later I flew back to Santa Fe and drove the rig back. 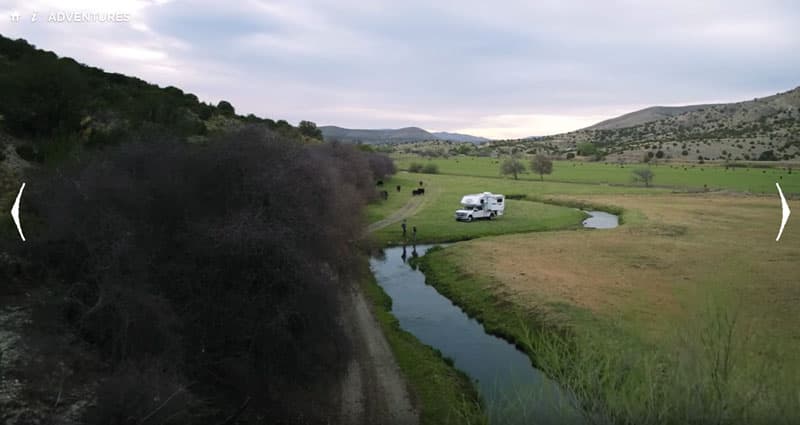 I took my drone on the trip so that I was able to take some footage and stills along the way to use in our marketing efforts.  I had some fantastic scenery with amazing sun sets and rock formations.  Outside Magazine shot and produced the complete final video.

TCM: Why do you believe its important for a video like this to be produced?

Bob: Video is 80-percent of the marketing tactic in our world right now.  Any form of video from five second snapchats to longer video such as this is huge.  The exposure of working with Outside Magazine is something you can’t pass up.  It was a phenomenal opportunity for Lance Campers and the truck camper marketplace. 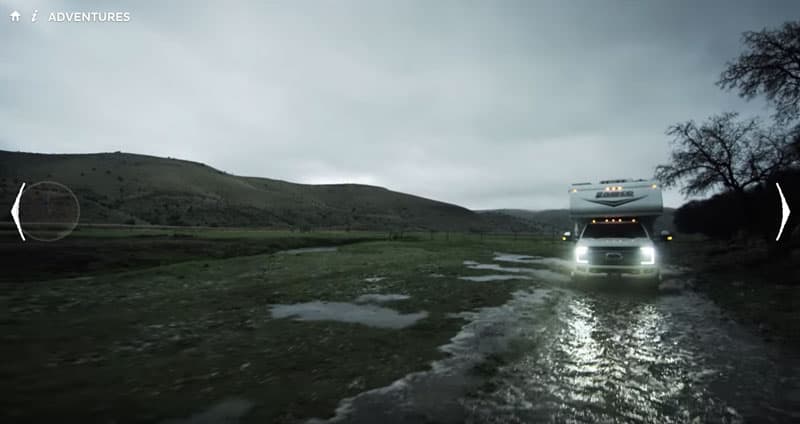 It’s very expensive to produce a video of this quality.  They used a RED digital cinema camera to shoot it.  For Lance Campers to produce a video like this would have started at about $50,000.  Getting the opportunity for the cost of a unit loan, fuel, airfare and my time was a no brainer.  Now we can use any part of the video in our marketing campaigns. 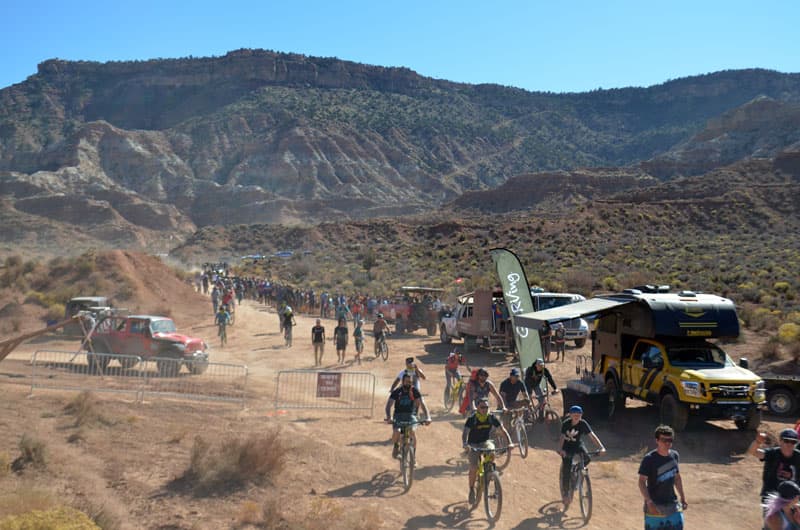 Above: The Rule Breaker (far right) at the Red Bull Rampage

TCM: Are you looking to develop additional truck camper videos with the Go RVing campaign?

We try to support Go RVing as much as possible.  We just took the Rule Breaker, our SEMA truck camper build from 2016/17, to Red Bull Rampage, a mountain bike competition near Zion National Park in Utah.  That was another opportunity from the Go RVing campaign. 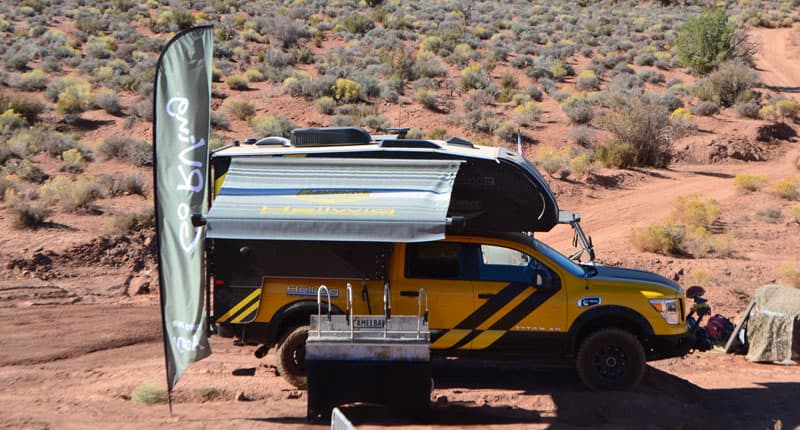 TCM: Is Red Bull Rampage something our readers can see on television?

Bob: Yes, Red Bull Rampage will be on ESPN the second week of December.  There were athlete interviews around the rig, so we had branding exposure there.  ESPN and Red Bull television have staggering numbers.

The only reason we did that event was because of the Rule Breaker.  It had to be a four-wheel drive vehicle.  We hope to get good coverage with that.  We put Lance branding on top of the awning for the helicopter shots.

TCM: This past August, Truck Camper Magazine published two articles – “The Go RVing Truck Camper Challenge” and “Fail to Respond” – that were critical of the RVIA and Go RVing for their lack of support for the truck camper marketplace and community.  Since you and several other Lance Camper team members have positions of the RVIA board and committees, can you give us any insights into what’s being done to address the situation?

Bob: I’m on the Go RVing Coalition.  The articles you ran about the RVIA and Go RVing campaign had a good impact for us here at Lance Campers.  It helped me speed along the process of posting the Outdoor Magazine video to their website.  The video had been finished for some time and they kept promising me they’d do it.  Your article got it moving along.

TCM: That’s good news.  We look forward to reporting on the changes the RVIA and Go RVing makes on behalf of the truck camper segment.  Is there any other news from Lance Campers?

Bob: Lance Campers just won its 16th Quality Circle Award from RVDA.  There are four categories in which we are evaluated by our dealer network; product quality, warranty, parts, and sales support.  In addition, RVDA asks our dealers if they would recommend our product line to other dealers.  We have trended upwards over past three years with that response and are 23-percent above the RV industry average.

This past year we spent a lot of time reengineering our entire truck camper line for the new Fords.  That’s all complete and doing well.  That was a huge resource commitment. 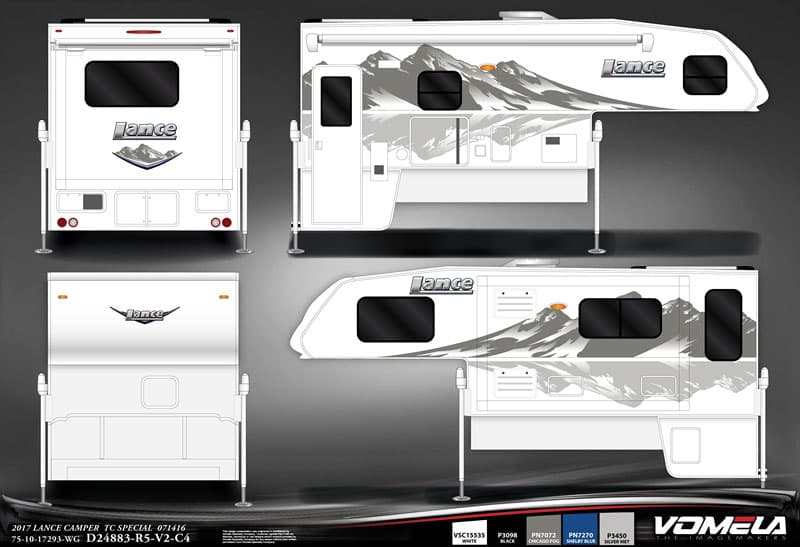 This year we are offering all-new mountain graphics on our Lance Campers.  You saw them on the black and grey Overland Edition of the Lance 650.  That was our SEMA unit a few years back.  The graphics were received so well that we have now released that graphic option.  The mountain graphics are now optional for any Lance Camper. 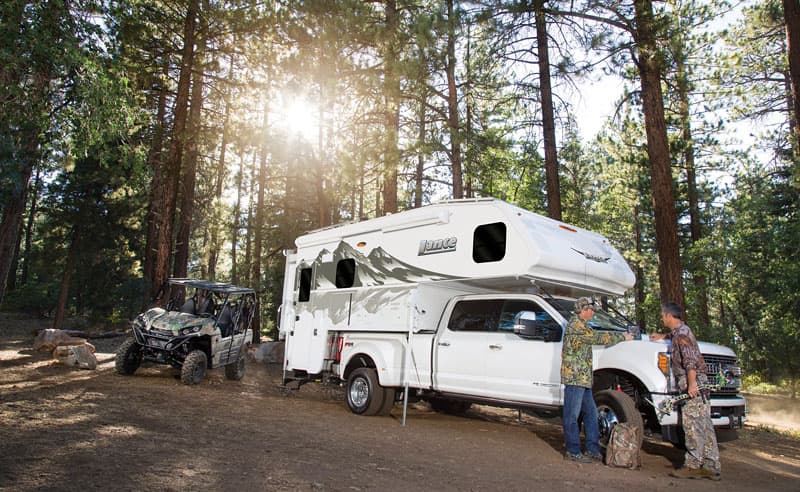 We are looking at new 2018 Lance truck camper models.  Truck Camper Magazine will have the exclusive when anything new comes out.

For more information on 2018 Lance Campers, visit the Lance website at lancecamper.com.  To request a free Lance brochure, click here.