Northwood Manufacturing announces the 2017 updates to their popular Wolf Creek truck camper line and teases not one, but two new Wolf Creek models currently in research and development.

Since launching as a sister truck camper brand to Arctic Fox in 2011, Wolf Creek has established itself as Northwood Manufacturing’s lighter and more affordable non-slide truck camper line.

Along side of Arctic Fox’s premium truck camper models, Wolf Creek offers an option for truck camper enthusiasts looking for something closer to entry-level.  As Northwood representatives have explained to us, not everyone wants the luxury features – or their associated weight and cost – of a high-end Arctic Fox truck camper.

For 2017, Northwood has made incremental updates to Wolf Creek’s list of standard features (called the Wolf Pack) and matched the interior options to mirror the Arctic Fox line.  While none of these updates are Earth shattering, these upgrades continue to refine Wolf Creek while improving the feature list and value of the campers.  In the end, that’s what the Wolf Creek brand is all about.

To dive deeper into the how and why of the 2017 Wolf Creek announcements, we talked to Donald Cochran, National sales Director for Northwood Manufacturing, and Doug Karr, Northwood’s in-house truck camper expert. 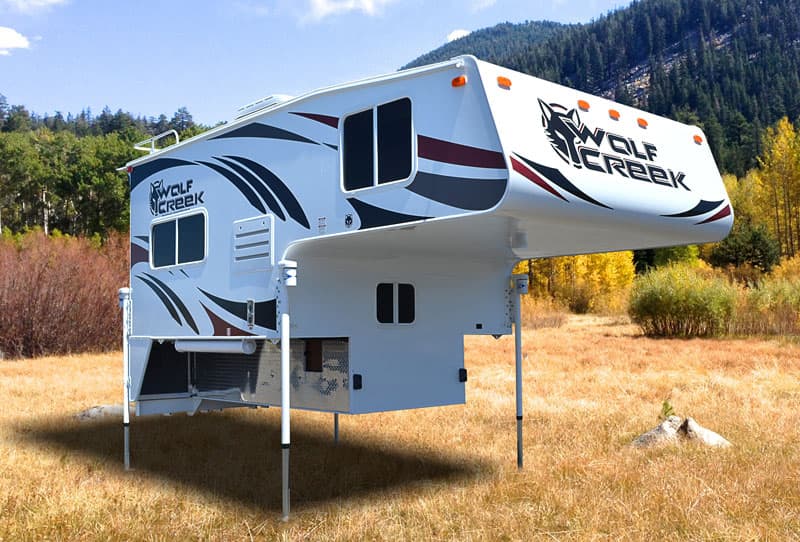 TCM: Are there any Wolf Creek models being discontinued for 2017?

TCM: Wolf Creek made a significant update to its graphics for the 2014 model year.  Tell us about the enhanced exterior graphics for 2017.

Donald: For 2017, Wolf Creek has the same style of aggressive graphics and color scheme that has identified so well with the Wolf Creek brand, and definitely the same logo.  The Wolf Creek wolf head and logo text has become enormously popular.  Wolf Creek has become instantly recognizable because of it, much like our Arctic Fox head and Nash geese, so we knew we did not want to change it.

I would guess we will be seeing some version of that wolf in all future models for quite some time, if not indefinitely.  As I said, we kept a very similar color palette with the black and a little richer shade of red, but also added a touch of deep bronze to change it up in a subtle way. 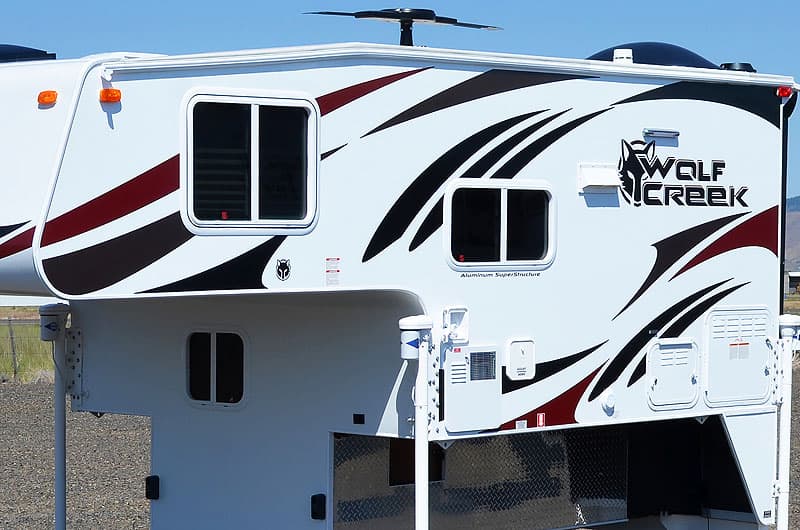 Above: Notice the black, three-piece element on the sides that hints at a wolf’s paw scratch

Some of the distressed-looking graphics were sharpened up a bit and for a couple of unique touches.  There is a black, three-piece element on the sides of every coach that hints at a wolf’s paw scratch as well as the word “Roam” on the back of every coach – a tip of the hat to our popular “Roam Where You Dare” tagline for Wolf Creek. 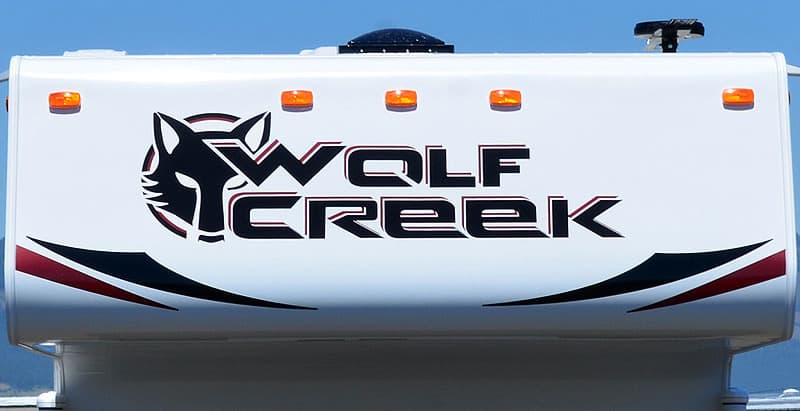 Above: The graphics on the nose cap of 2017 Wolf Creek Campers

We love adding fun, personality touches to all of our coaches.  The new 2017 Wolf Creek campers definitely have that same edgy, “Roam Where You Dare” feel, but there are changes, no matter how subtle. 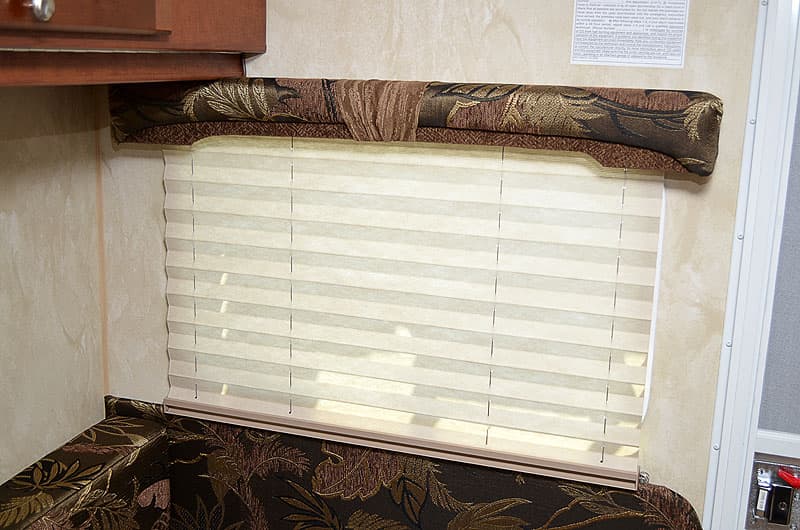 Donald: The fabric night shade window treatments have been a Wolf Creek option, but we made them standard for 2017.  People want lighter weight campers to put on three-quarter ton trucks, but don’t want to sacrifice features or quality.  The fabric night shade window treatments don’t add weight to the units, but give the campers an important upgrade. 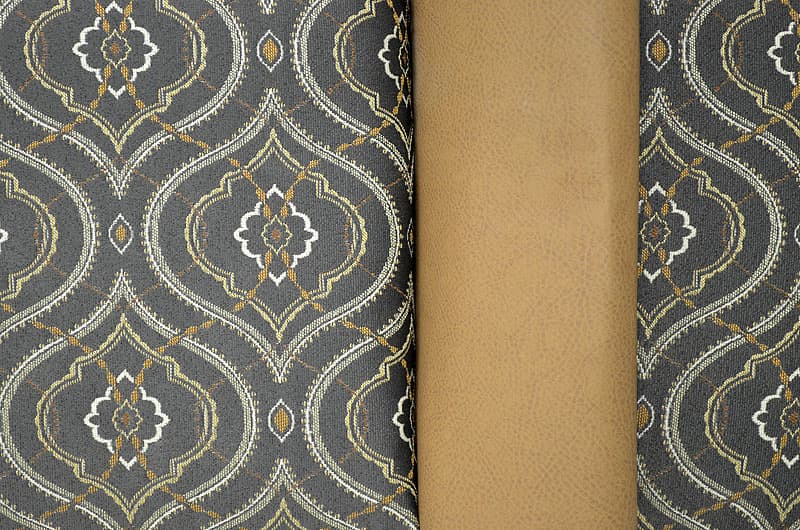 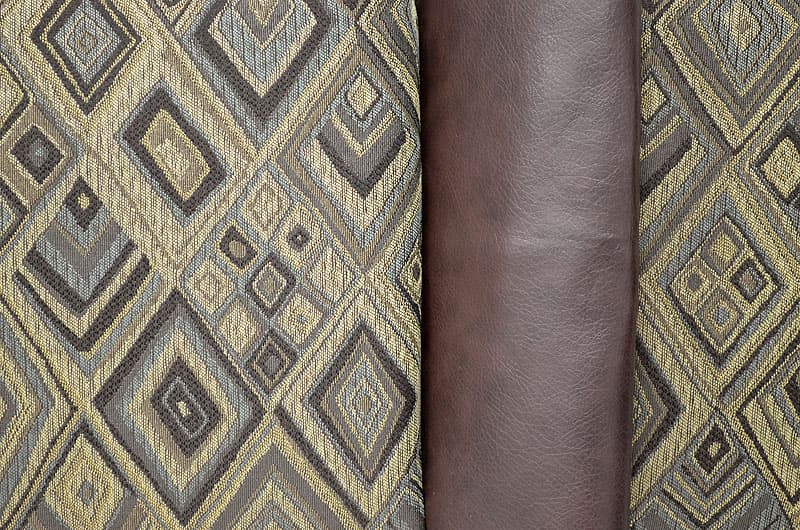 Donald: Yes, the fabrics and interior decor choices the same for Arctic Fox and Wolf Creek truck campers.  The quality of the fabrics is identical. 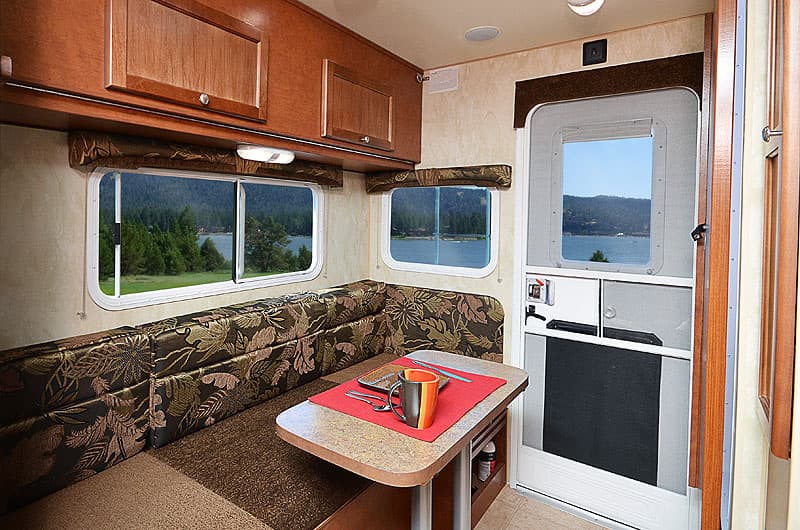 Above: Early Autumn decor in the dinette of a 2017 Wolf Creek 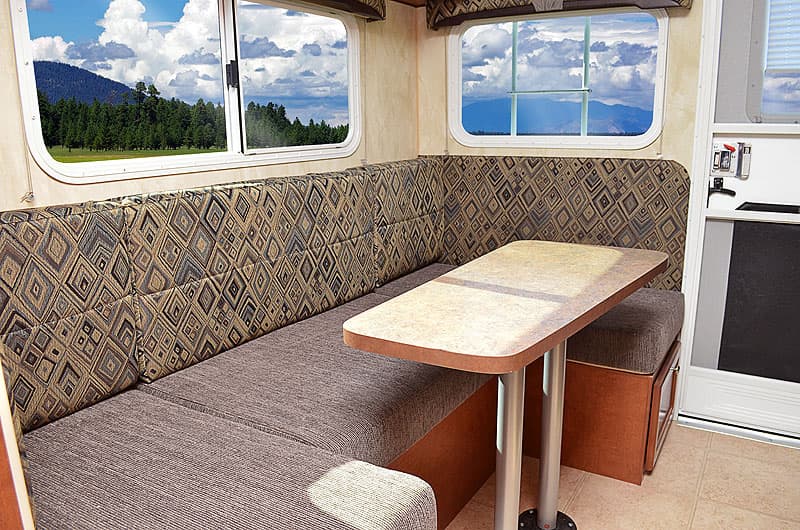 Above: Solitaire Azul decor in the dinette of a 2017 Wolf Creek

Donald: The Wolf Pack is a group of options that are standard build.  These are the options that virtually all of our campers get ordered with so, to make it easy, we packaged them all together.  It is the same concept as our Fox Value Pack on our Arctic Fox campers.  Every Wolf Creek unit includes the Wolf Pack, unless special ordered by a customer without it.

Doug: It’s similar to when you purchase a new car.  People don’t want crank windows in their cars anymore, even if they are part of the base model.  We put the options that most dealers and customers order into the Wolf Pack and build all campers with this option group, unless otherwise specified by the dealer. 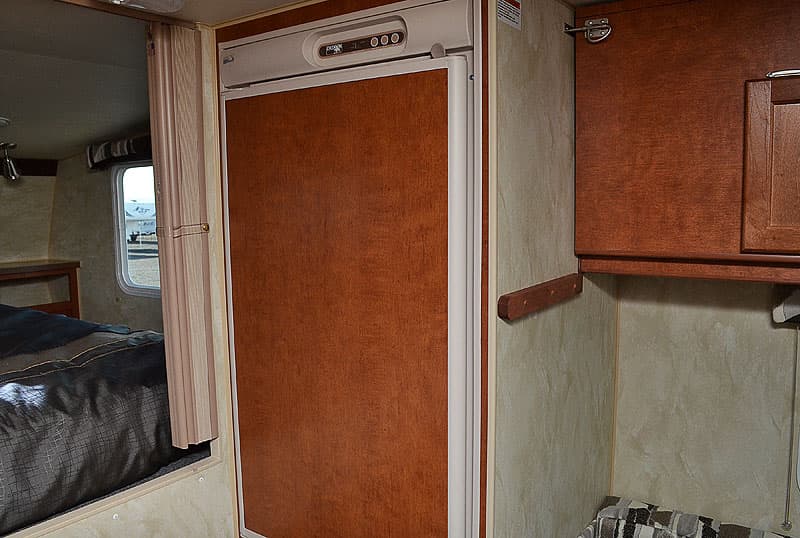 Above: The five cubic foot refrigerator in a Wolf Creek 850 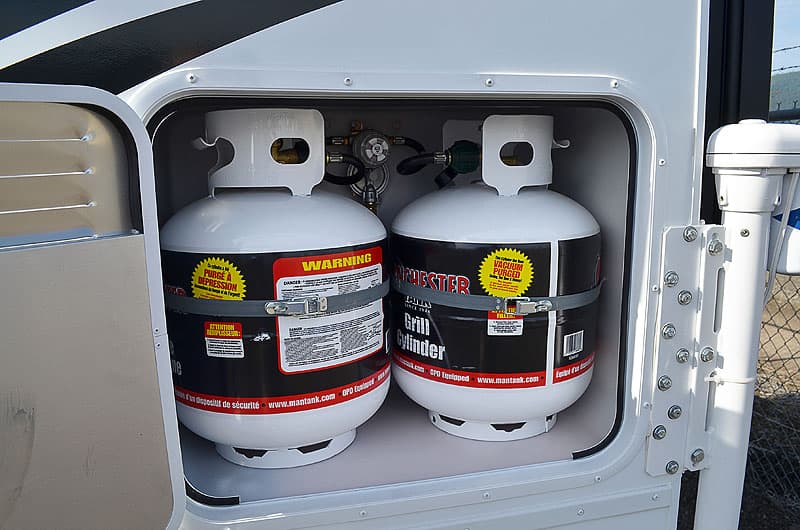 Almost everybody wants electric jacks and two five gallon propane tanks.  We put these popular options into the Wolf Pack. 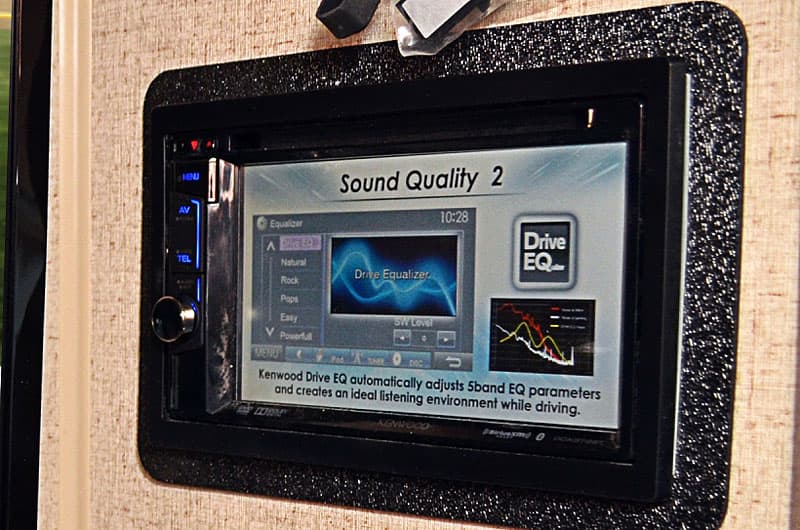 TCM: Is the optional double DIN Kenwood AM/FM/CD/DVD player being introduced for the 2017 Wolf Creek line the same as the stereo system available in the 2017 Arctic Fox line?

Doug: Yes it is, and it’s also Bluetooth capable which is an Absolute Northwood feature.

TCM: For folks who are just now learning about Northwood, what is Absolute Northwood?

Absolute Northwood is a quality construction standard and/or feature that we feel is so fundamentally important that we implement it across all of the brands we manufacture.  The standards and features that are Absolute Northwood are built into everything we do. 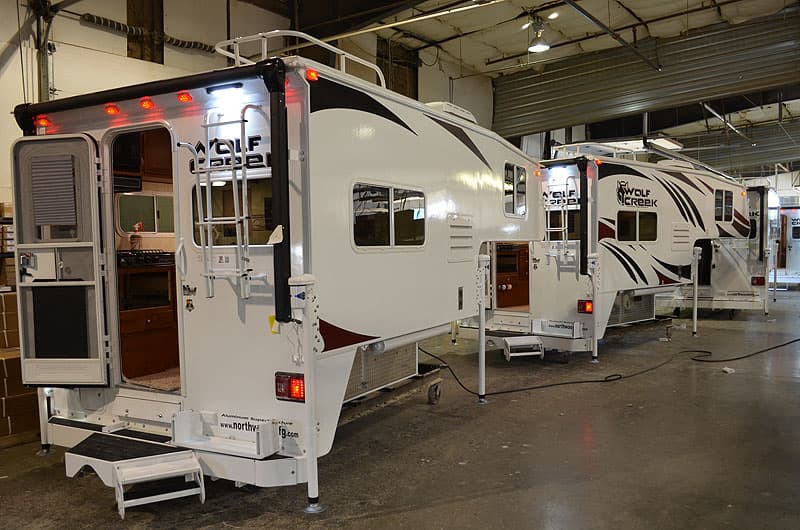 Donald: Absolute Northwood is our own self-imposed quality standard.  For example, we have wood stuffed aluminum framing and lamination so our construction is strong.  Even the way we insulate our tanks becomes our standard.  That’s what we do and it is the only acceptable way for us to do it. 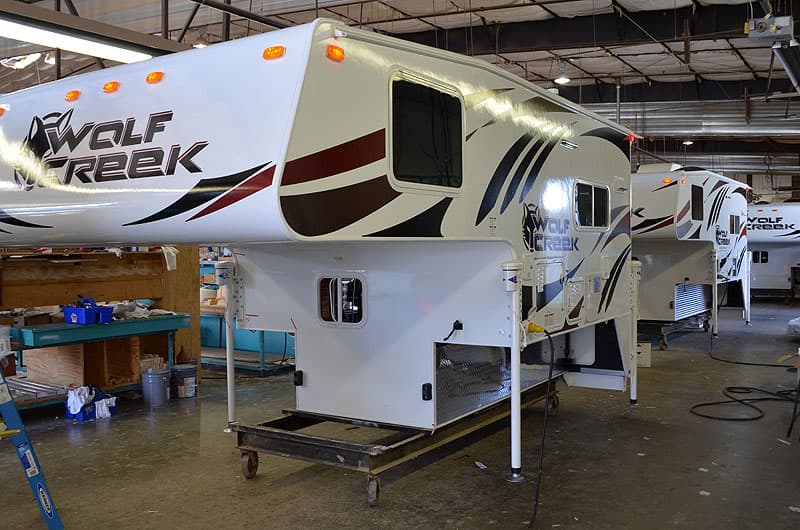 Absolute Northwood is a great advantage to a product like Wolf Creek.  Because of our buying power, even a value oriented product gets a high-end build quality and feature set.  It makes sense to put those features into Wolf Creek truck campers because we can.

Donald: Wolf Creek has been successful with the 840 and 850.  We are building as many of these popular models as production can handle at our high quality standards.

We look at new floor plans constantly.  Doug has about six plans he’d love to see, and two are right around the corner.  Maybe you’ll see a new Wolf Creek next spring.

TCM: That would be exciting.  Will it be a half ton model?

Donald: To be honest, that’s not where our expertise is.  We are focused on making our truck campers durable and strong.  That’s what our customers want them to be.  I can’t give you more information on the new Wolf Creek at this time. 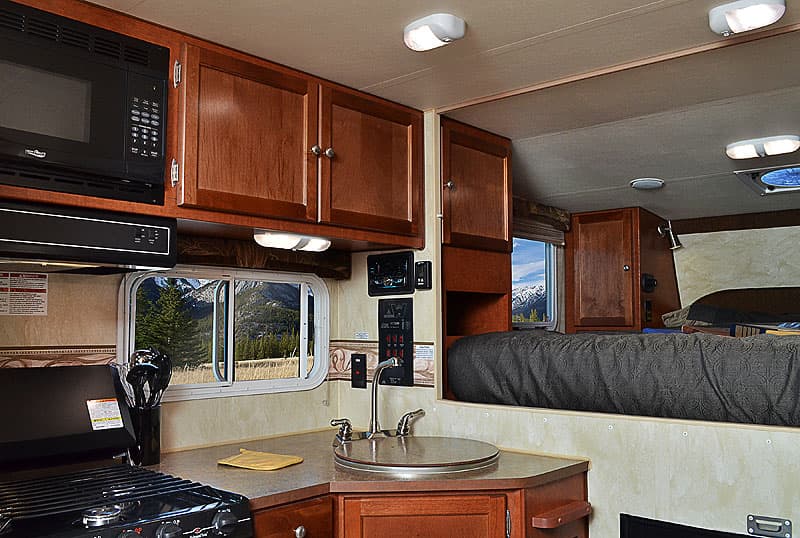 Above: All LED lighting is part of Absolute Northwood

TCM: Many of the 2017 Wolf Creek interior updates are identical to the 2017 Arctic Fox updates.  For readers who aren’t familiar the differences between these two Northwood truck camper lines, how would you distinguish the two brands?

Donald: It’s not in the feature content.  We are making the difference in the construction.  The Arctic Fox line has thicker sidewalls with more insulation.  It’s the difference between Chevy and Cadillac.  Both are high quality and loaded with features, but you’re not going to make a Chevy into a Cadillac. 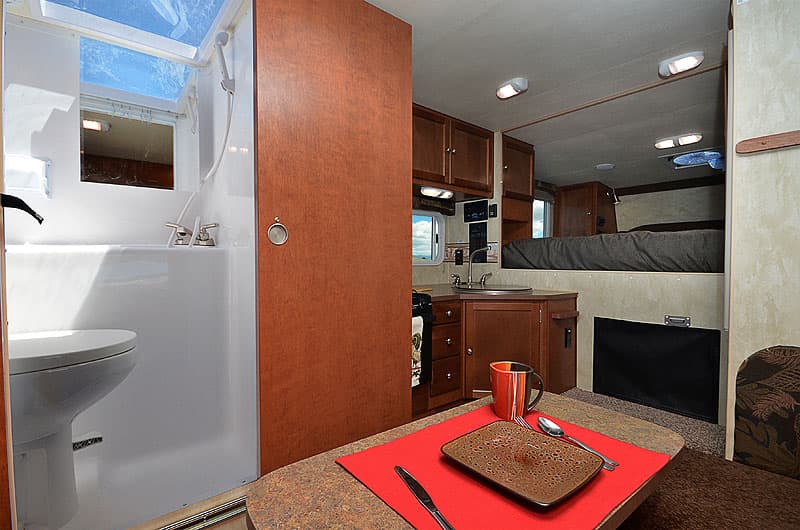 Above: Porcelain toilets are new for 2017 Wolf Creek campers

There are Arctic Fox features that have been added to 2017 Wolf Creek campers including the magnetic luggage door catches, all-LED interior lighting, porcelain toilets, and 12-volt and USB charging centers in the cabovers.  We also added an electric awning on the rear, and the Kenwood stereo to the Wolf Pack. 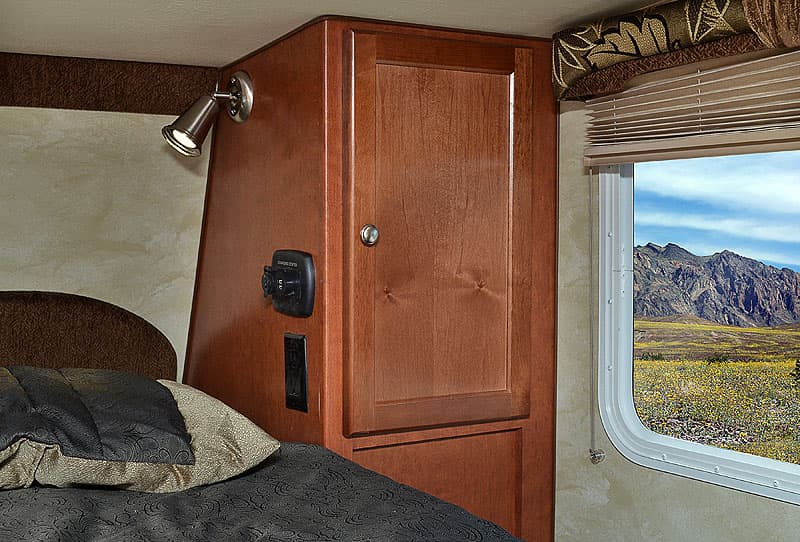 Above: 12-volt and USB charging centers in the cabover

Wolf Creek is in a constant state of evolution where we continue to try to take weight out while maintaining our high quality standards.  We may take a stick out or simplify the cabinets in the cabover, but we aren’t going to take our integrity out of it. 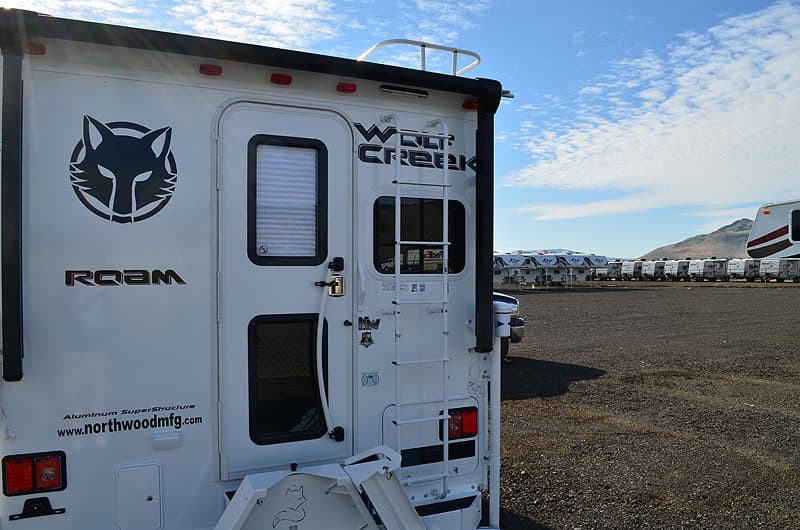 Above: An electric awning on the rear wall is now part of the Wolf Pack

Doug: Until the reintroduction of the non-slide Arctic Fox 865 for 2017, Wolf Creek was our non-slide truck camper line.  The Wolf Creek 850 and 840 are non-slide models.  There is a lot of Arctic Fox in Wolf Creek.  It has the same jacks, one piece nose, and wood-filled aluminum frame.  Both products are Absolute Northwood. 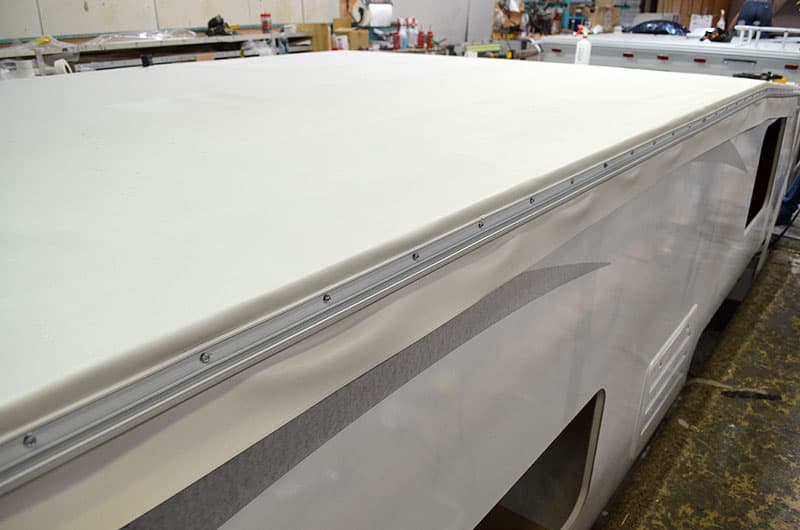 Above: To save weight and cost, Wolf Creek campers feature a flat roof and ceiling

But, over the years, certain people don’t want to have all the upgrades.  They want more of a basic, lighter weight camper at a better price point.  Wolf Creek has 1-inch walls versus the 2-inch walls in Arctic Fox models.  Wolf Creek also has the flat roof and ceiling versus the thicker cathedral arch ceiling and roof of the 2017 Arctic Fox line.  That’s the main difference. 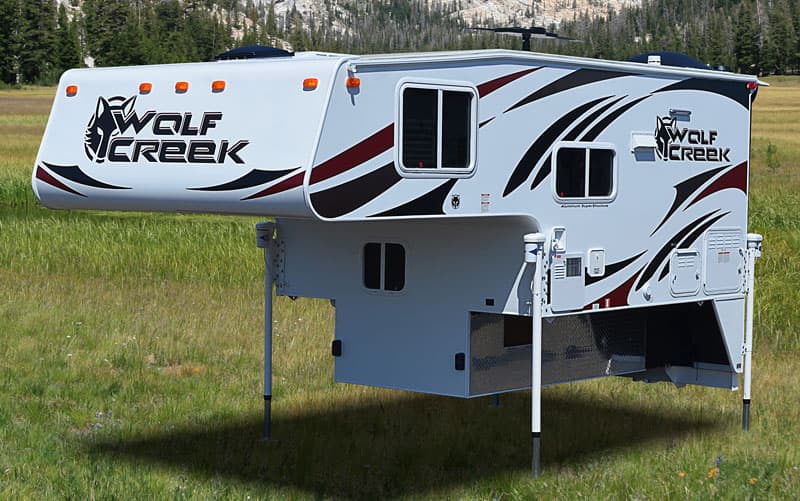 TCM: Is there anything else that you’d like to add about the 2017 Wolf Creek line?

Donald: We are good at what we’re good at.  Our continued excellence goes across all of our product lines.  Our founder, Ron Nash, set the high standards at Northwood Manufacturing.  For my money, we have the best truck camper build team in the world in our camper facility.  We are very excited about the future of Wolf Creek truck campers. 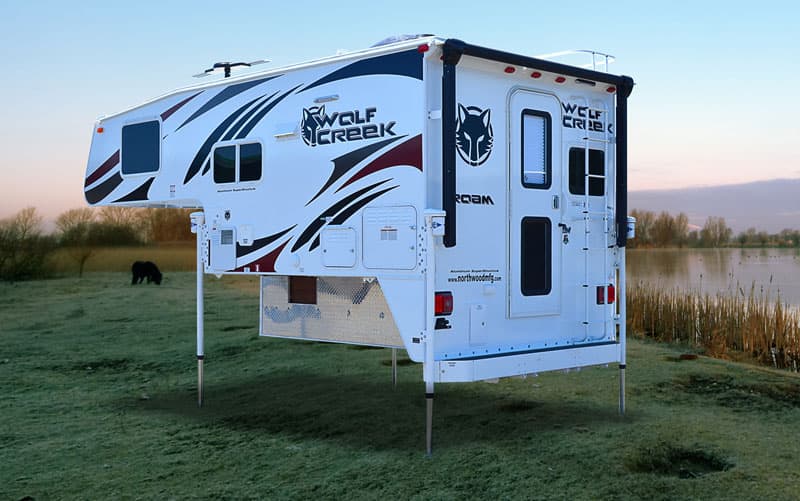