Truck Camper Magazine coats the underbody of a used camper with Alvin Rubber In A Can looking to create a flexible waterproof seal.  Here’s how we did it, how it turned out, and what rubber in a can could mean for truck camper maintenance.

Three years ago we purchased a ten year old Alpenlite 1100 to be our personal rig and project camper.  Since then we have been experiencing the real world the pros and cons of owning an older camper.

By far the toughest challenge has been maintaining the myriad of exterior seals, seams, and screws.  After taking possession of the camper, we immediately inspected the unit and discovered the seals were in dire need of attention.  With patient guidance from the team at Hallmark RV, we learned the traditional way to properly caulk and seal a truck camper.  This resulted in a must read article for every truck camper owner; “How To Inspect and Repair Camper Seals”.

Since then we have been diligent about maintaining our seals in the traditional way; checking the seals by eye and caulking and sealing trouble spots regularly.  I climb onto our roof a couple times a month and check the roof’s seals.  If a seal is visibly broken or a screw pops through the sealant, I immediately caulk it with Sikaflex 715, or patch it with Eternabond.  At least twice a year we spend a day or so going over all of the side seals and applying Sikaflex 521.  It’s a lot of work, but it beats the leaks.

The one area of our camper that remained at risk after all of these efforts was the rear skirt and overhang.  Even before we got the camper, rear truck wheels had pushed water into this area and visibly started to rot the inside wing walls.  Specifically, the wing wall on the passenger’s side had begun to split open from underneath and the other side showed signs of luan wood root.  Our camper is aluminum framed and laminated, but that doesn’t prevent the luan wood in the laminated walls from rotting.

When discussing this problem with Mike Tassinari (aka Mikeee) last winter, he suggested we coat the rear skirt and overhang with rubber in a can.  Rubber in a can is essentially a spray-on rubber coating designed to fill small seams, cracks, and holes to create a durable, watertight, and flexible surface.  Even better, rubber in a can adheres to all metals, woods, and plastics – exactly the materials our truck camper’s rear skirt and overhang are made from. 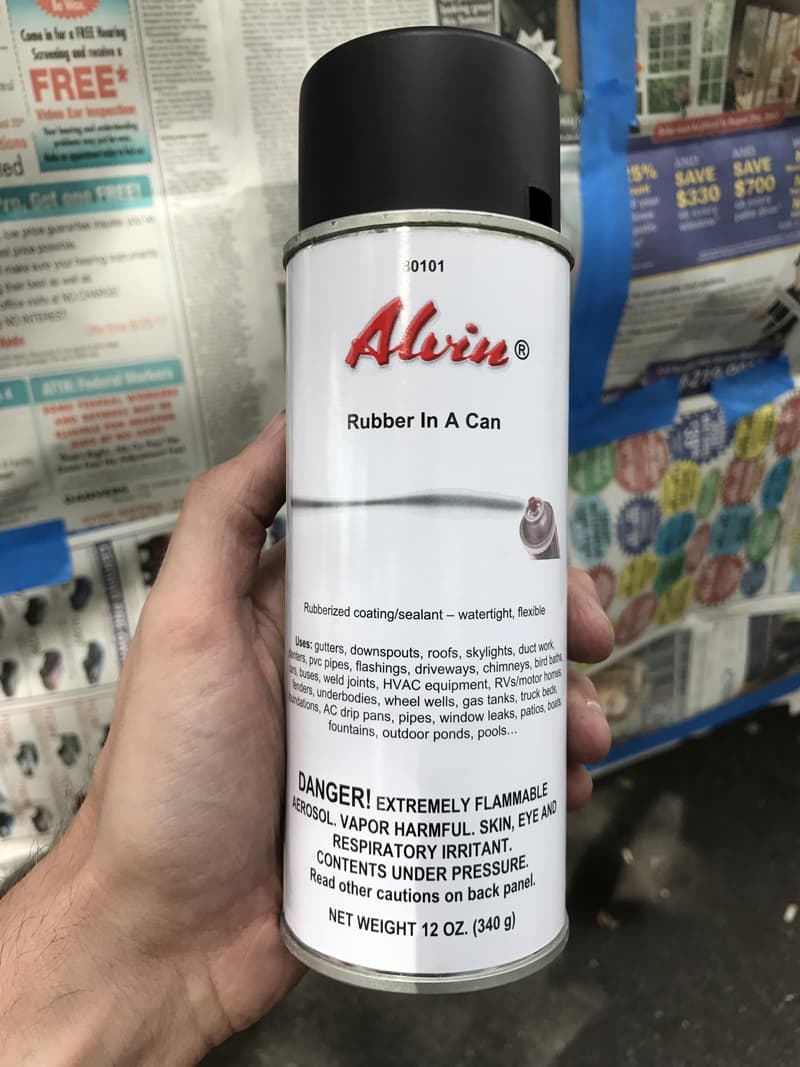 Mikeee had already applied rubber in a can to the rear skirt and overhang of his Lance 1172 and was very pleased with the results.  When we looked at his 1172 skirt and overhang, it had an even coating of rubber sealing the entire area.  Mikeee explained that he checked the coating regularly and sprayed additional rubber in a can over areas that get scraped or appeared to need an additional coating.  Overall, the material had held up well, and was doing its job.

We had previously planned to coat the underbody of our camper with Line-X bed liner, but the associated cost, weight, and thickness of that material stopped us from proceeding.  In contrast, rubber in a can was significantly less expensive, lighter, and created a much thinner coating.  The thickness was important for our rig because there’s less than a half-inch between the truck and camper on the passenger’s side when loaded.

When Mikeee volunteered to help us to apply the material to our camper, we put plans into motion.  After the North-East Truck Camping Jamboree in Lake George, we would stop by Mikeee’s house, and get the job done. 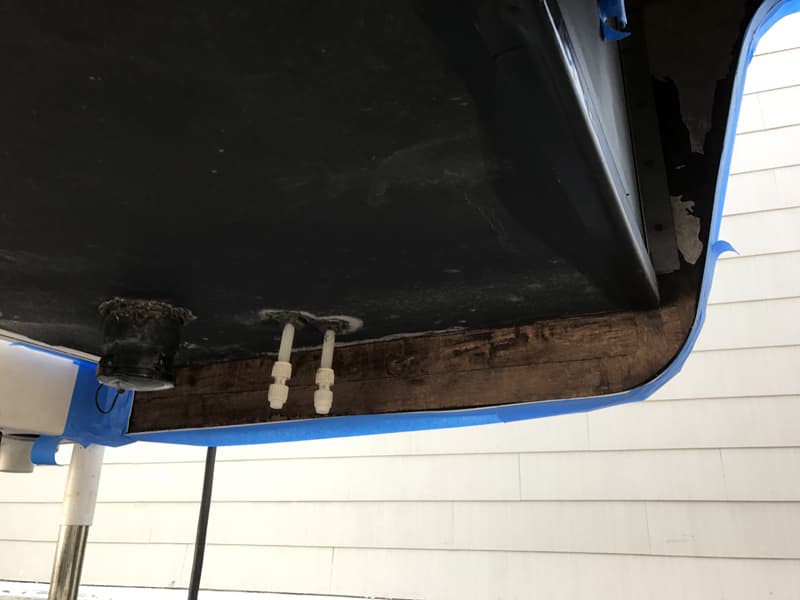 Above: Before we sprayed wood primer, we peeled off the original paper-thin liner on the inside skirt

Prep work is usually the hardest part of any camper maintenance project and this was no exception.  The first step was to demount the camper from the truck and inspect the entire underbody of the camper.  We were specifically looking for loose or peeling material that could defeat the rubber once applied. 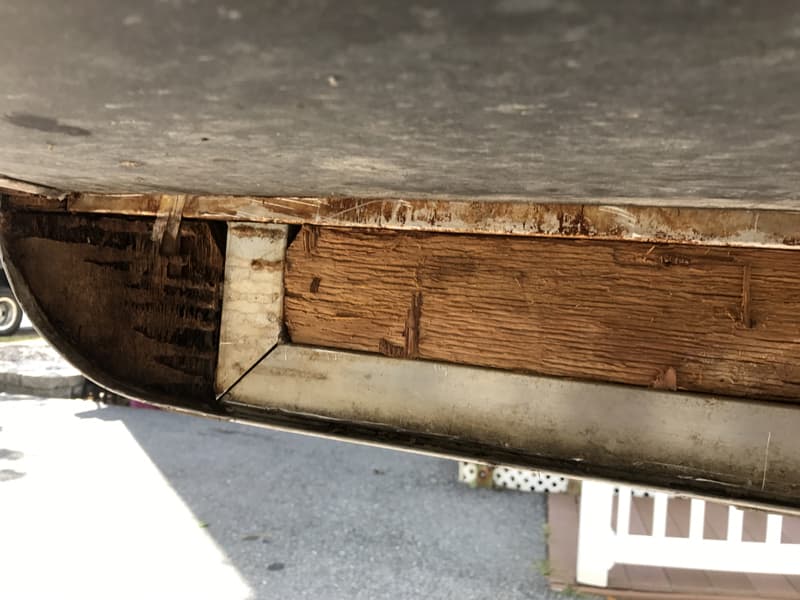 Above: The rotted wood and aluminum framing on the rear passenger’s side skirt 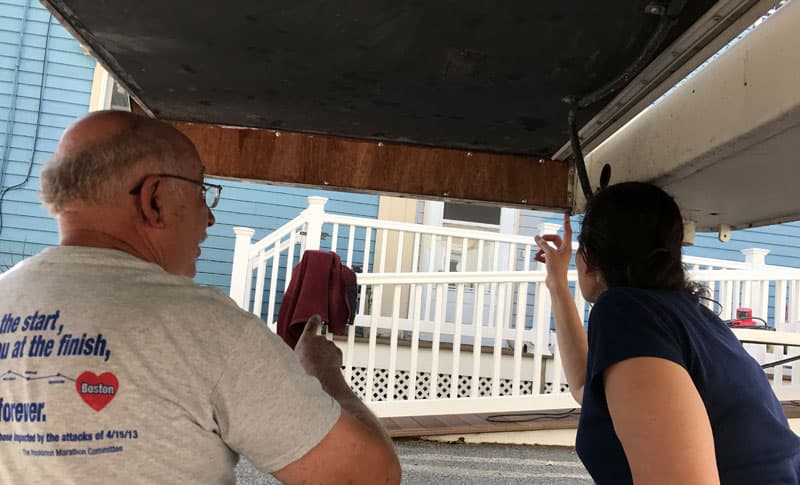 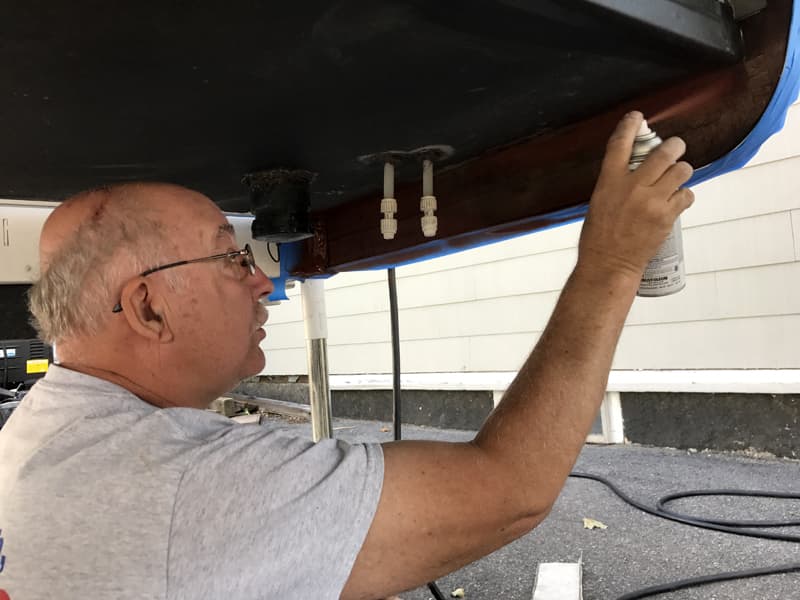 Above: Spraying wood primer on the driver’s side skirt

While Mikeee was applying the wood primer, we used Professional Strength Goof Off to clean and then inspect all of the seals, screws, and seams in the underbody area.  Goof Off was also used to clean the entire underbody and overhang. 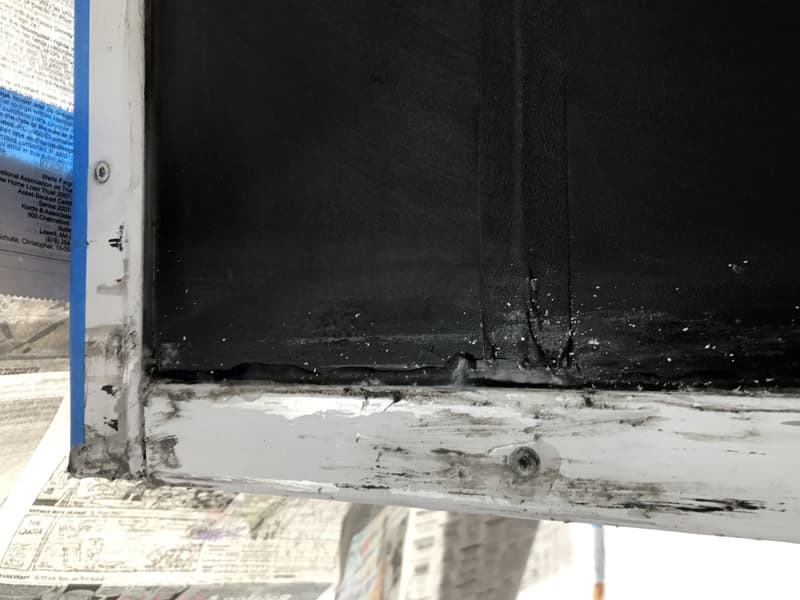 Then Pro Flex RV (Mikeee’s long-term sealant preference) was applied to anything and everything that needed attention.  We applied Pro Flex RV to every screw head and every seam that would be later coated with the spray-on rubber. 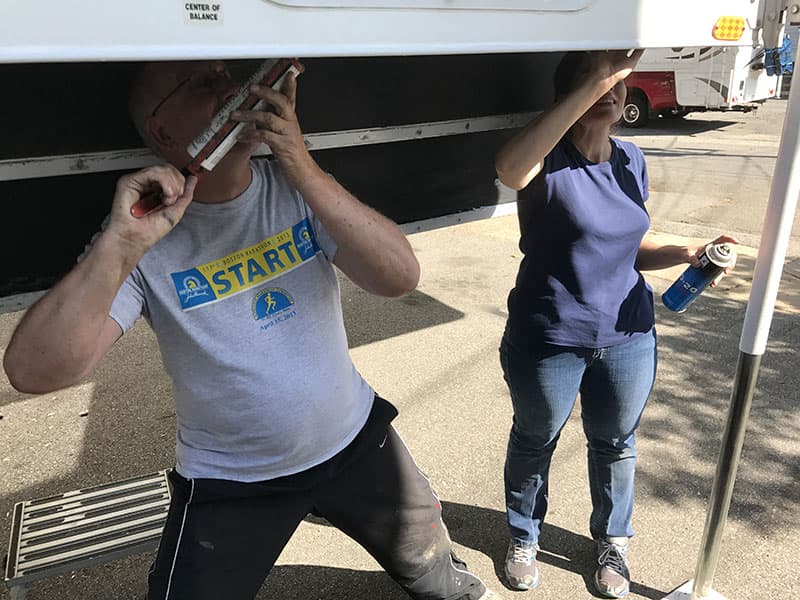 During this extended underbody inspection we were surprised at how many things we had missed during our previous seal sessions.  We had been focused on the myriad of exterior seals, but neglected to look as intently at the underbody.  Considering how much moisture is kicked up by rear wheels, this was a major oversight. 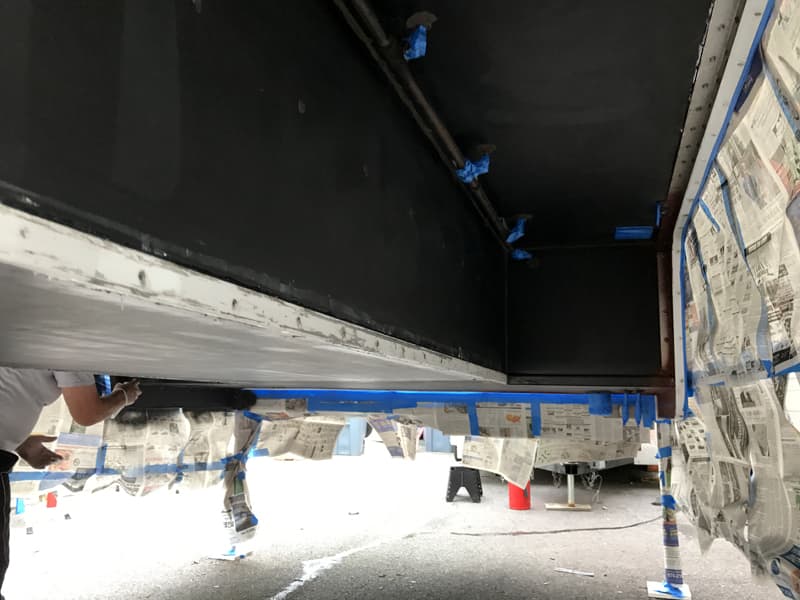 In addition to the trim line, we also used blue painters tape to tape-off the sewer connection, low water drains, turnbuckle tie-down points, and anything else that we didn’t want sealed in rubber. 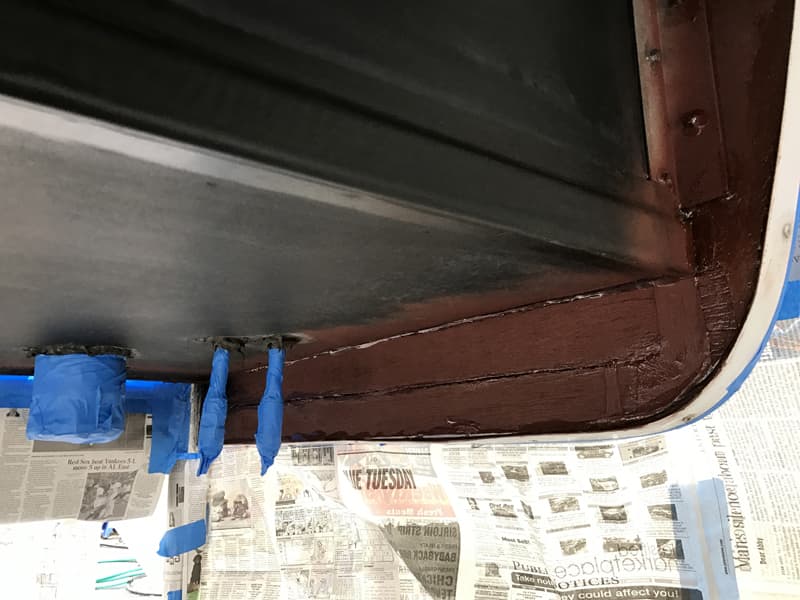 When we were done, the camper looked absolutely ridiculous, but was finally ready for the main event. 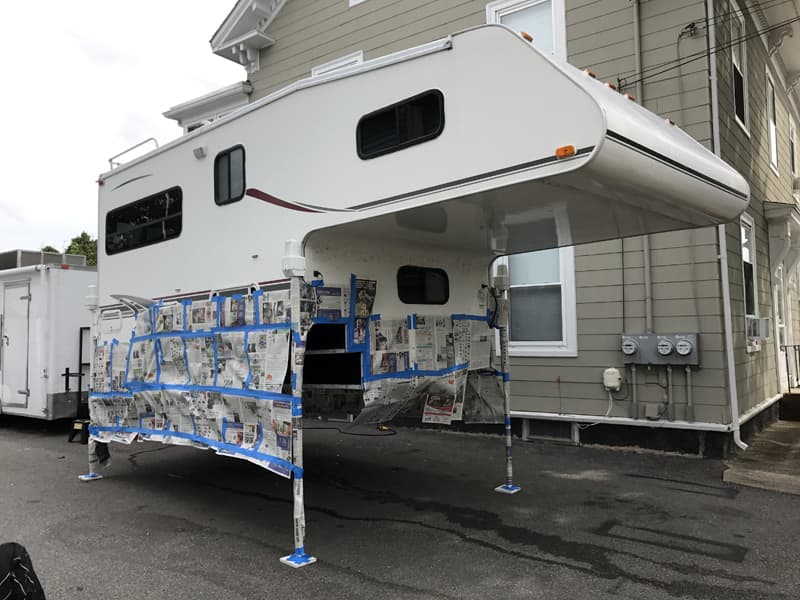 Mikeee disappeared into his workshop and emerged with two cases (24 cans) of Alvin Rubber In A Can.  Described on the product as, “Rubberized coating/sealant – watertight, flexible” it lists a very wide range of applications including gutters, skylights, driveways, weld joints, and wheel wells.  Of course it said nothing about truck camper underbodies, but the listed materials Alvin adheres to checked out. 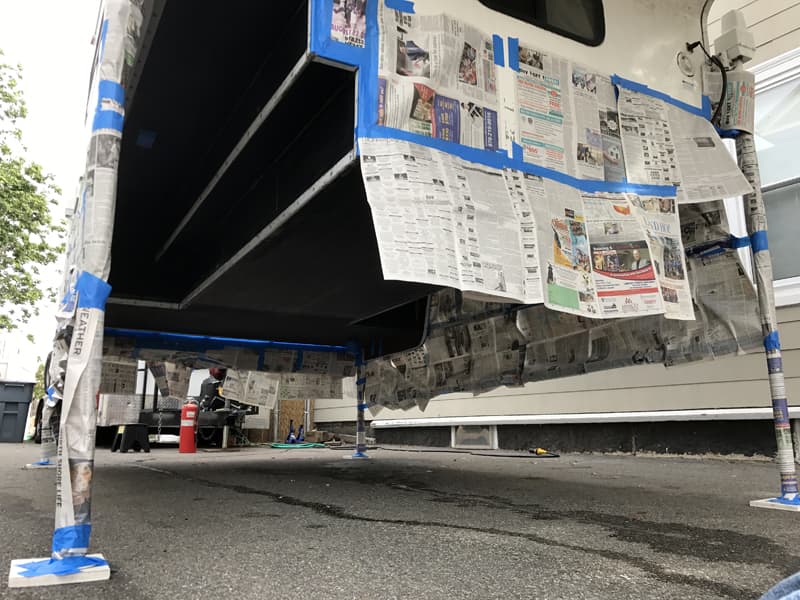 Above: The underbody right before we sprayed with the rubber sealant 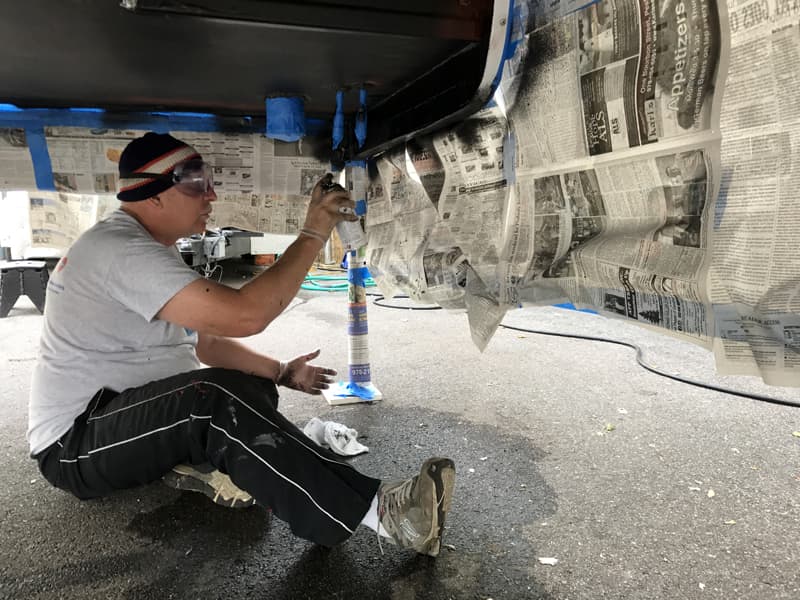 The rubber spray went on fast.  Mikeee traced the seal, seam, and screw lines with smooth strokes.  Once those areas were coated, he filled the sections in between line by line. 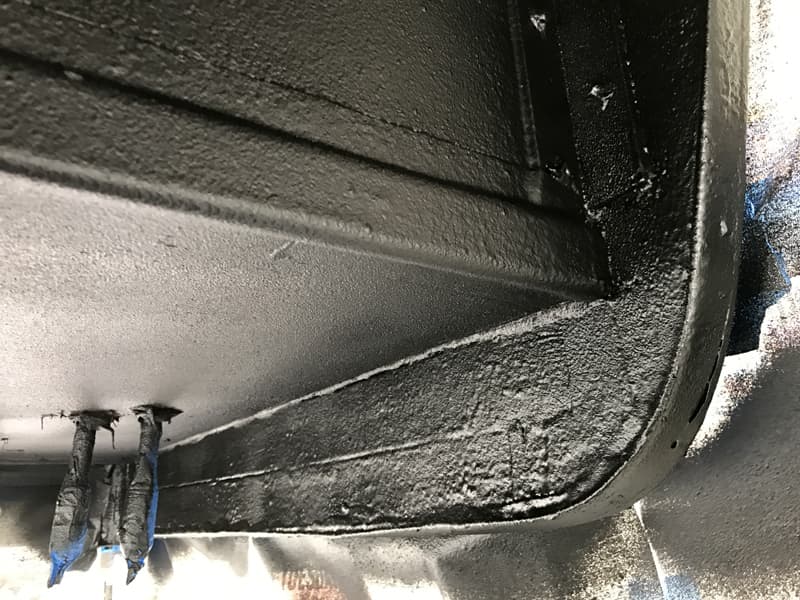 Each side of the camper took less than 15-minutes, as did the rear underskirt area.  Mikeee actually did two coats, just as he had done on his camper.  The spraying part of the project was done in less than two hours including final touch-ups. 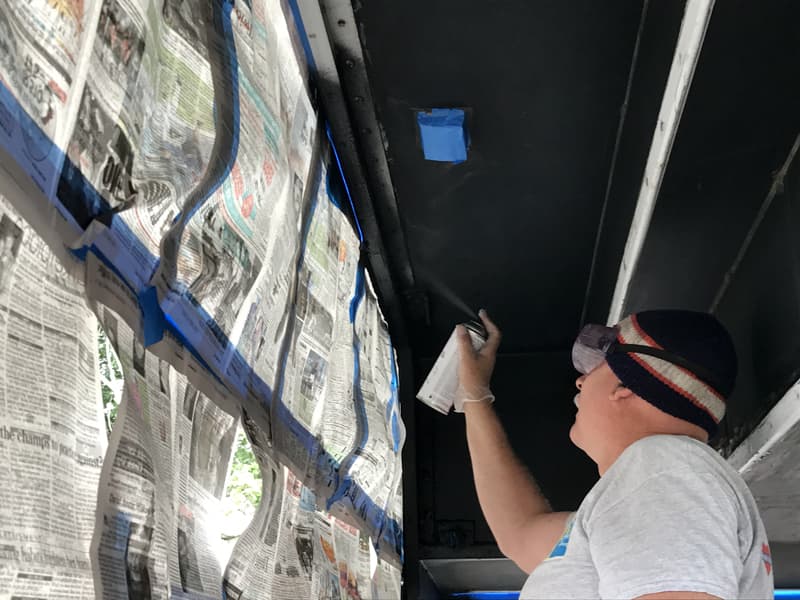 According to the can, the rubber needs two hours before it can be touched. 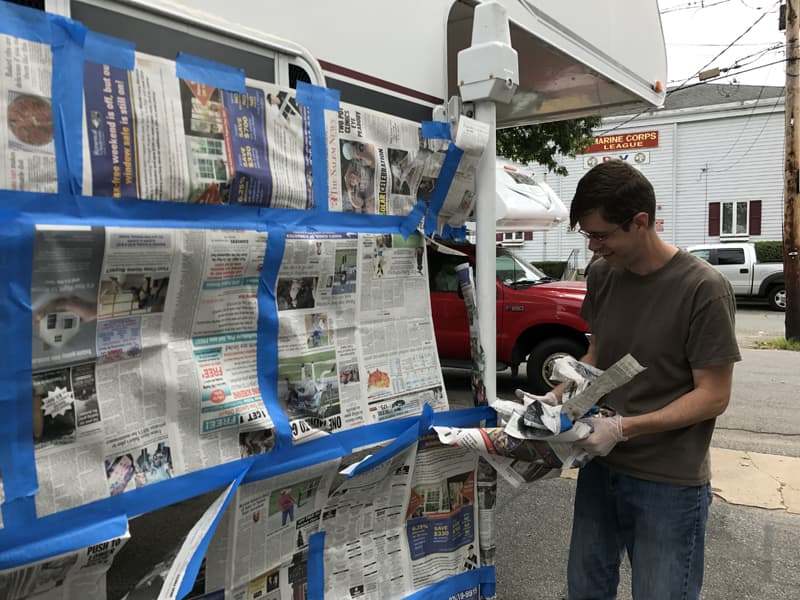 Two hours after the second coat was applied, we removed the newspaper and tape and took another look at our work. 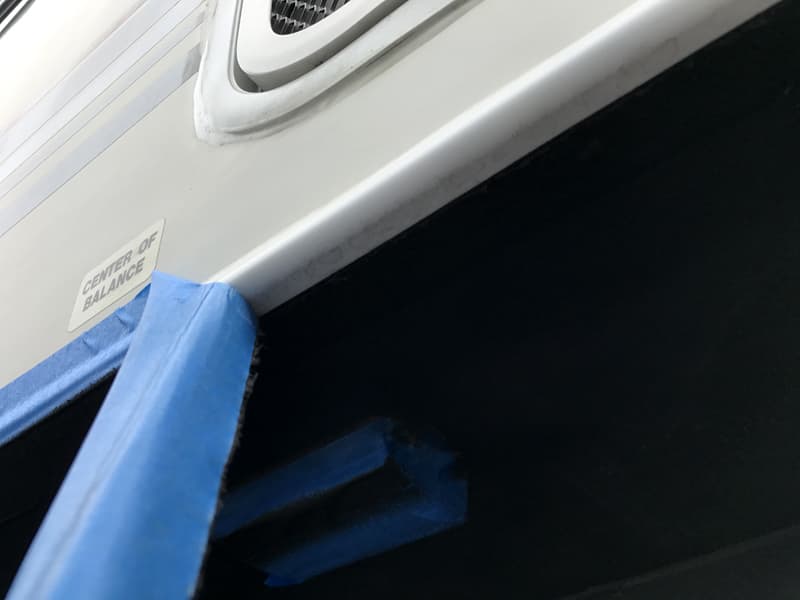 Without the tape and newspaper, more daylight revealed additional spots we had missed or needed additional material.  Once those were hit with quick shots of rubber, the project was completed. 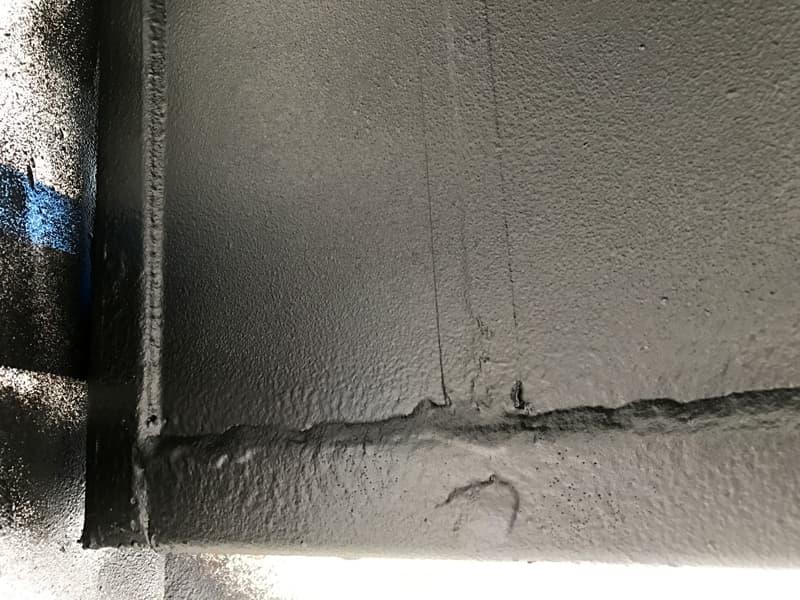 The rubber appeared uniform across the entire underbody of the camper giving it a fresh and clean aesthetic.  Honestly, it’s the best looking part of the camper now.  Angela even said, “Can we do that to the rest of the camper?”

The rubber may have looked great, but it smelled terrible.  The drying rubber had a strong and noxious chemical odor. 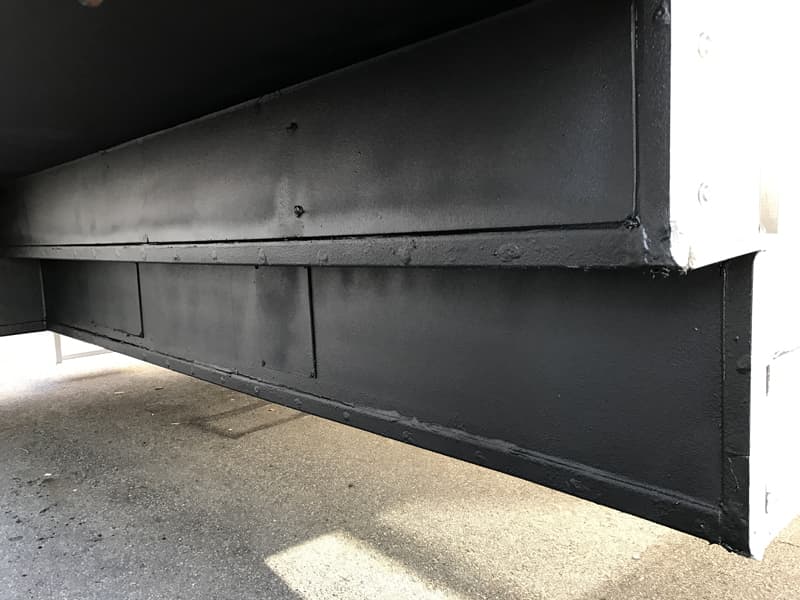 That night we returned to our camper to sleep and discovered that odor had made its way into our camper.  It wasn’t strong enough to chase us out, but we also didn’t want to sleep there either.  Anyone who’s painted a bedroom knows you don’t necessarily want to sleep in there that night.  Fortunately, Mikeee offered to let us sleep in his Lance 1172.  Good night. 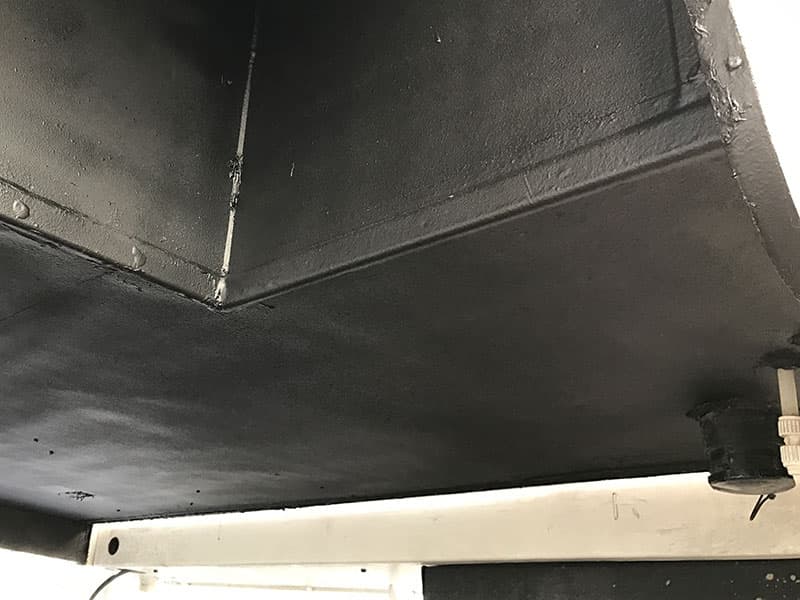 The next morning the smell had mostly dissipated inside the camper.  Angela could still detect it, but I could not.  We figured that the rubber would really dry once the camper was loaded and driving down the highway for a few hours.  Over the following two days we drove the rig for eight hours.  By then the rubber odor only existed if you put your nose right up to the material.  A week later the same was true; the smell was only apparent if you put your nose to it.

Implications and a Question

As of now, these questions have not been answered.  We are impressed with the coating and excited about the implications of a flexible watertight seal under our camper.  We are also concerned about the longevity of the material and want to see the rubber odor continue to diminish over time.  We also want to see how our rear skirt and overhang hold up moving forward.  Could the rubber actually trap water in these areas and exacerbate rot?  Time will tell.

In the future, there’s no reason why brand new truck campers couldn’t be treated with semi-permanent coatings that would 100-percent waterproof the truck campers.  These coatings might need to be inspected and maintained now and then, but that process would not require the considerable time and imperfection of traditional caulk gun sealants.  Those days would finally be over.

Until then, we need to keep experimenting and pushing forward with different seal approaches.  Rubber in a can holds great promise for the rear skirt, overhang, and underbody.  It comes in different colors (including white) and there are even clear versions on the market.  If this coating proves successful, it could be the beginning of a new age in waterproof truck camper manufacturing and maintenance.

Using rubber in a can and other coatings, could we see truck campers that routinely last 10 and even 20 years with minimal annual maintenance?  The implications of that change could be profound.

Please also read How To Inspect A Used Truck Camper before you purchase a pre-owned unit.

Home » Systems and Maintenance » Rubber In a Can For Truck Campers