Doesn’t it seem like stuff always goes wrong on the weekends when folks are harder to reach and everything is closed?  Our most recent problem popped up on a Sunday afternoon.  We thought we were up creek, but then we remembered a unique feature of Rieco-Titan jacks; the red remote.

It all started a couple weeks ago while camping with fellow truck campers.  In the mid-day heat, the sun was beating down and we wanted some shade.  Our borrowed Cirrus 920 truck camper has a large powered side awning.  If only we could find the switch to push it out. 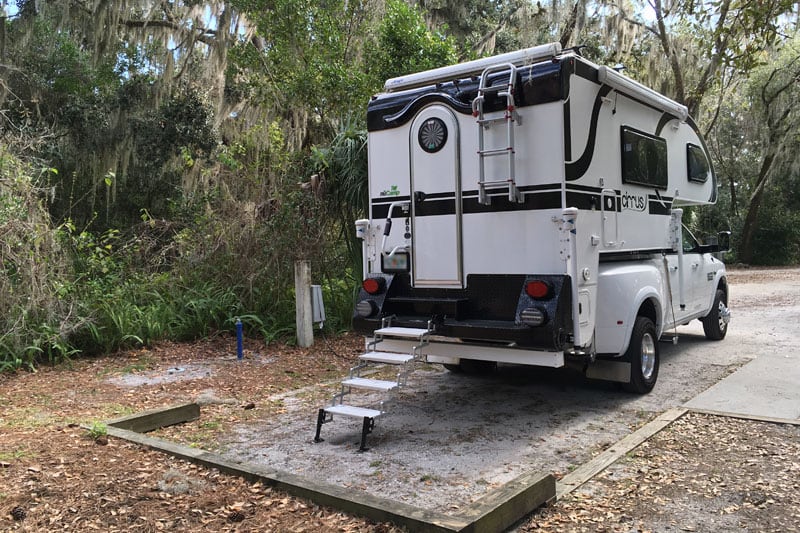 That’s when one of our friends (let’s call him Roy) said, “Hey, I bet the powered awning works off the auxiliary function on the Rieco-Titan remote”.  On newer campers with powered awnings the awning is activated, pushed out and pulled back in via the jack remote control.

Well, we tried a few buttons and managed to freeze the Rieco-Titan remote.  A red light on the remote appeared indicating the system was frozen.  Even the jacks would not respond. 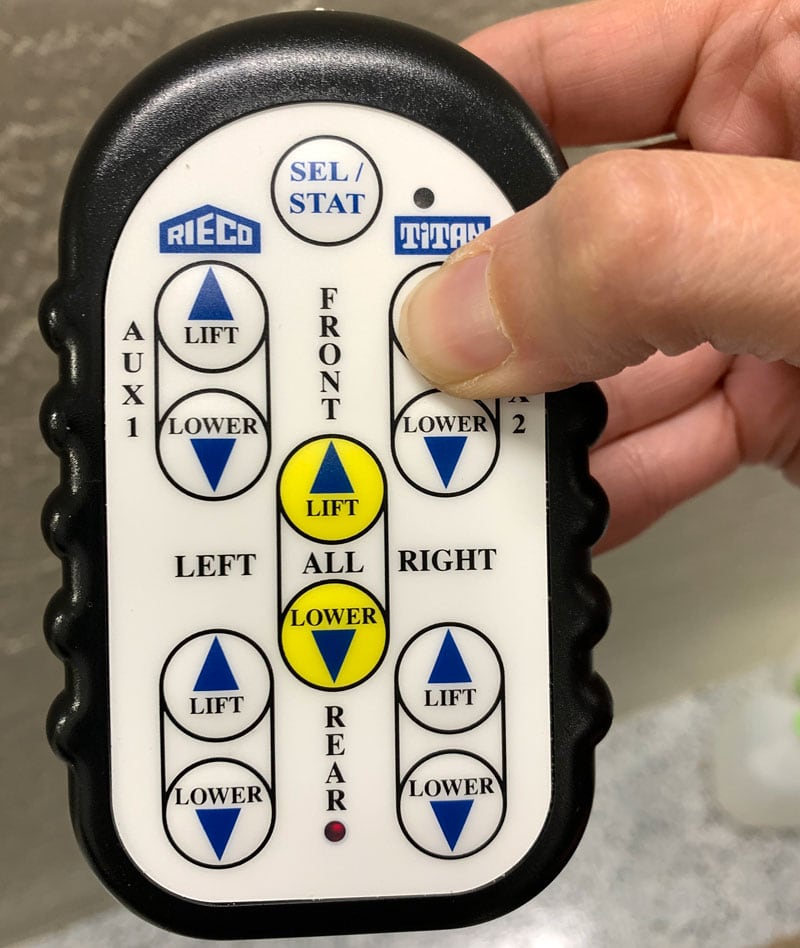 Above: It is hard to see in the picture, but there’s a red light on the Rieco-Titan remote under the word “REAR” on the bottom of the remote

Our friend quickly lost interest and it was time for dinner soon after.  I thought, “We’ll get back to this next time we need to remove the camper.  It might reset itself in the meantime.”  Wishful thinking!

Fast forward two weeks and it was time to remove the camper.  And wouldn’t you know it, that red light was still on the remote control and the jacks wouldn’t budge.  Did I mention it was late Sunday afternoon and we needed to get this done before working on a certain magazine the next morning?  Funny how that happens.

That’s when Gordon said, “Rieco-Titan includes the Red Emergency Remote exactly for situations like this!” 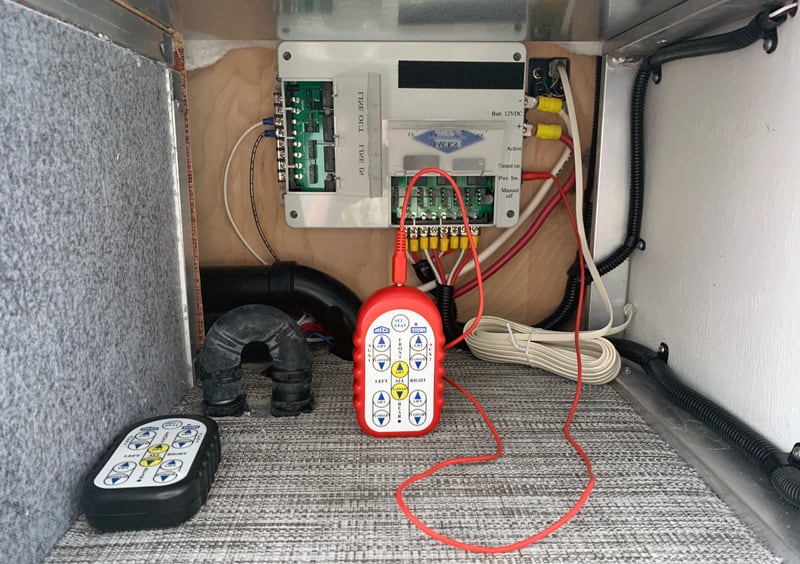 For those who are not familiar with Rieco-Titan’s Red Emergency Remote, it’s a secondary jack remote control that works wired directly to the Rieco-Titan receiver box.  There is a 1/8-inch red cord that plugs into the remote and then to the receiver box to operate the jack system.

The Red Emergency Remote ensures that you have a secondary remote if your remote batteries die, you lose your wireless remote or you break it.  It also helps if you just manage to get the wireless remote messed up like we evidently did.

The Rieco-Titan wireless remote controls normally work beautifully, so we had never used the Red Emergency Remote before.  Hope this works… 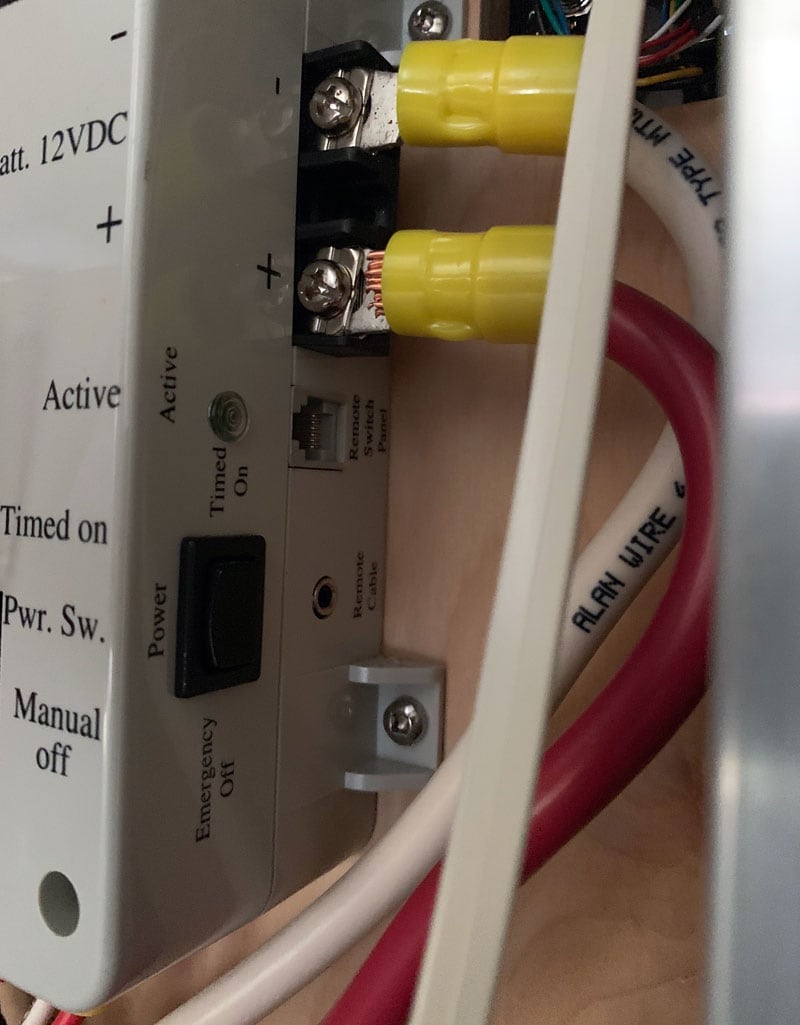 At first we couldn’t quite place where the red cord went into on the box since it was tightly fit against the wall of the camper.  When we finally we found the port, the Red Emergency Remote worked perfectly. 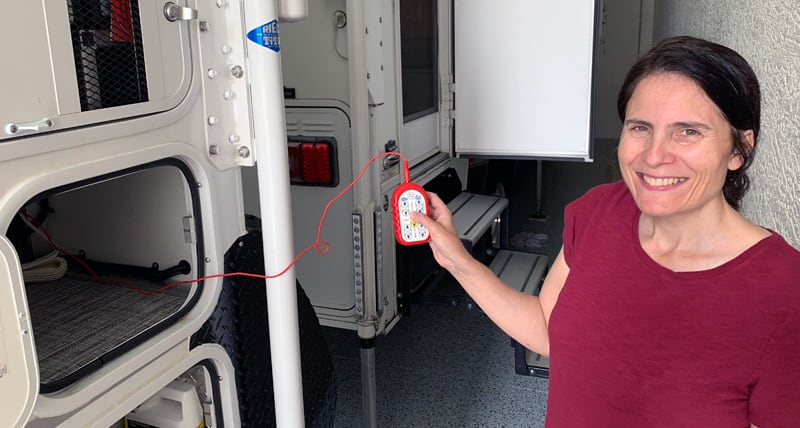 It was a little weird being tethered to the camper after using jacks wirelessly for so long, but we were able to get the camper off the truck!  Yahoo!

On Monday morning we contacted Doug Bakker at Rieco-Titan to find out how to reset the wireless Rieco-Titan remote.  Doug said, “Press and hold the top button (SEL/STAT) for five seconds.  The light should change to green.  That should change the mode.”  And it did.

Note that Doug wasn’t telling us how to “reset” the remote, but rather how to change modes. Having never used a Rieco-Titan remote for anything other than raising and lowering the jacks, we did not know this remote control command.

Now many of you may be asking, “Why didn’t you just go to the owner’s manual to find the reset instructions?”  Unfortunately, our demo camper does not have all of its paperwork.  The Rieco-Titan manual was not available, at least not in print. 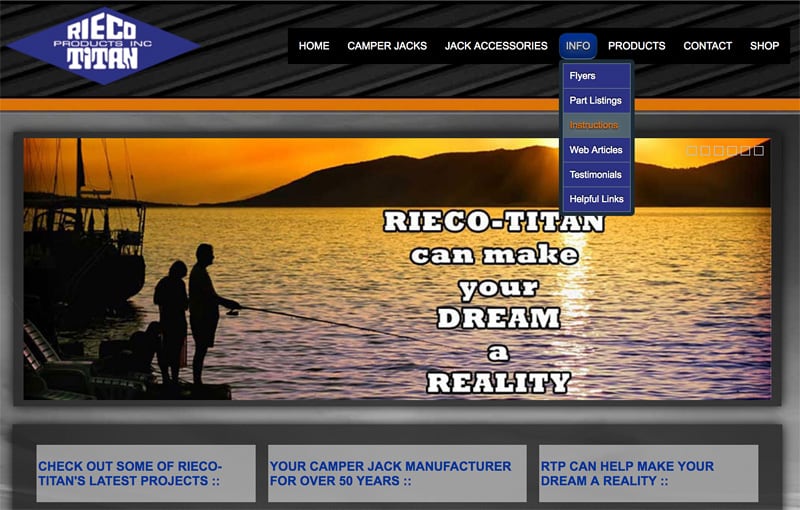 Doug explained that the Info tab on Rieco-Titan’s website features PDF downloads of their product manuals.  We would have certainly hit the web looking for that information, if we hadn’t remembered the Red Emergency Remote first.  Red Remote to the rescue!

Home » Systems and Maintenance » Rieco-Titan Red Remote To The Rescue