Centering guides can be just the ticket to avoid truck bed dings, get a truck camper truly centered and keep a loaded camper from moving.  Here are four clever centering guide solutions every truck camper owner should consider. 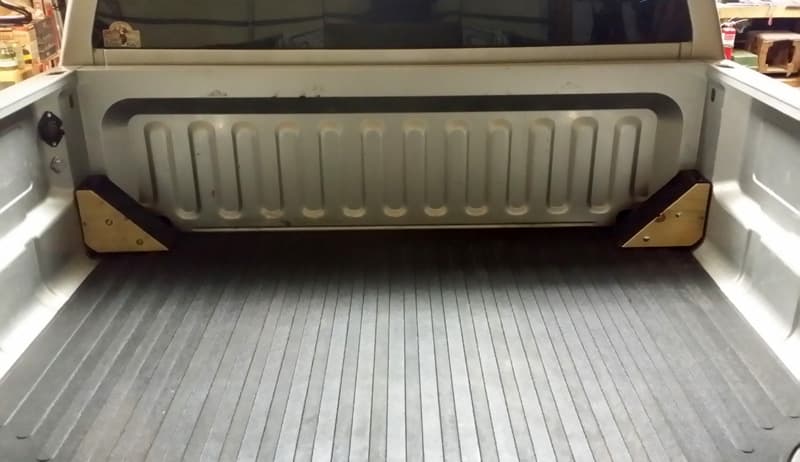 I wanted easily removable, yet fully functional alignment blocks for the bed of my truck. 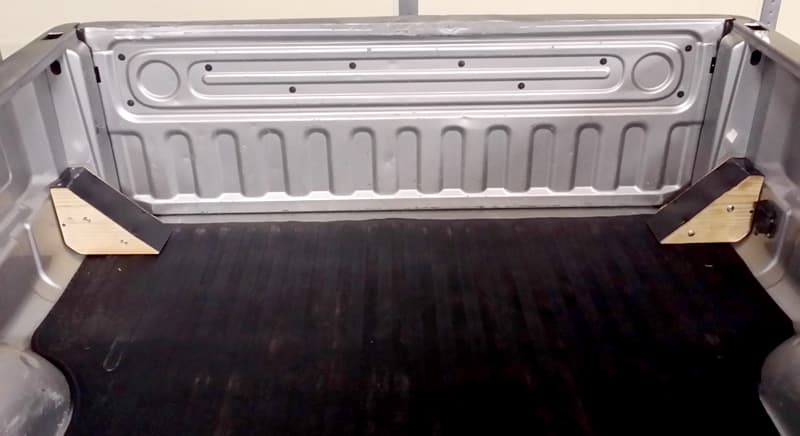 I also wanted a way to secure the blocks to the bed without having to crawl under the bed to secure them.  In previous designs I drilled holes in the bed and secured wooden alignment blocks via a wing nut on a threaded rod into each block.  That was a pain.

For this iteration of my alignment block journey, I built each of the four alignment blocks out of three pieces of 2×6.  I cut them at a 45-degree angle.  When they are bolted together, the 45-degree angle would form the face for the camper to slide on while aligning itself into the bed of the truck. 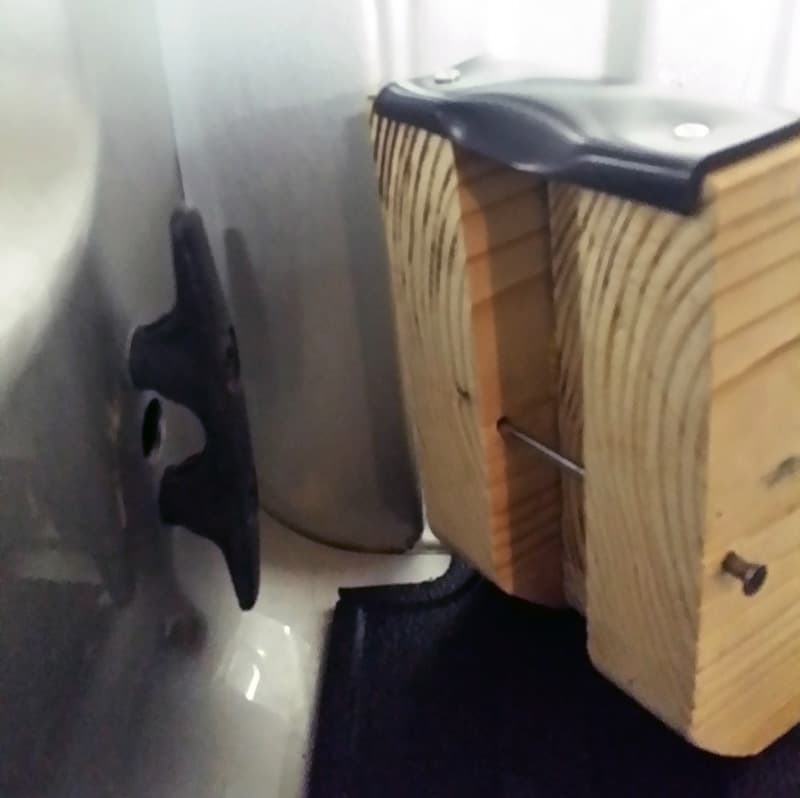 Since the cross grain of a 2×6 isn’t all that slippery, I added Kydex to the face of each alignment block.  To secure each block to the bed, I used the existing tie-down points and made the inner 2×6 shorter than the outer two.

Then I drilled holes in the outer blocks to accept a framing nail to pass through one outer 2×6, then the bed mounted tie down, and then the other outer 2×6. 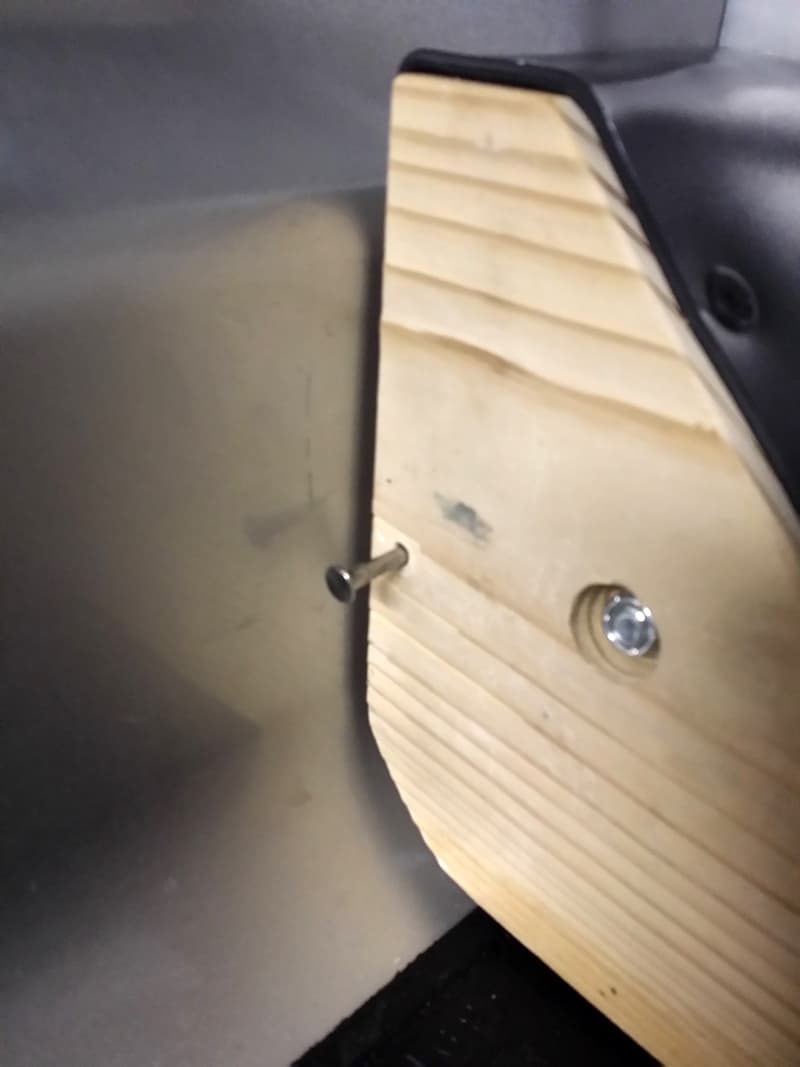 I used carriage bolts to hold each assembly of three 2x6s together.  Once assembled, the wood was polyurethaned. 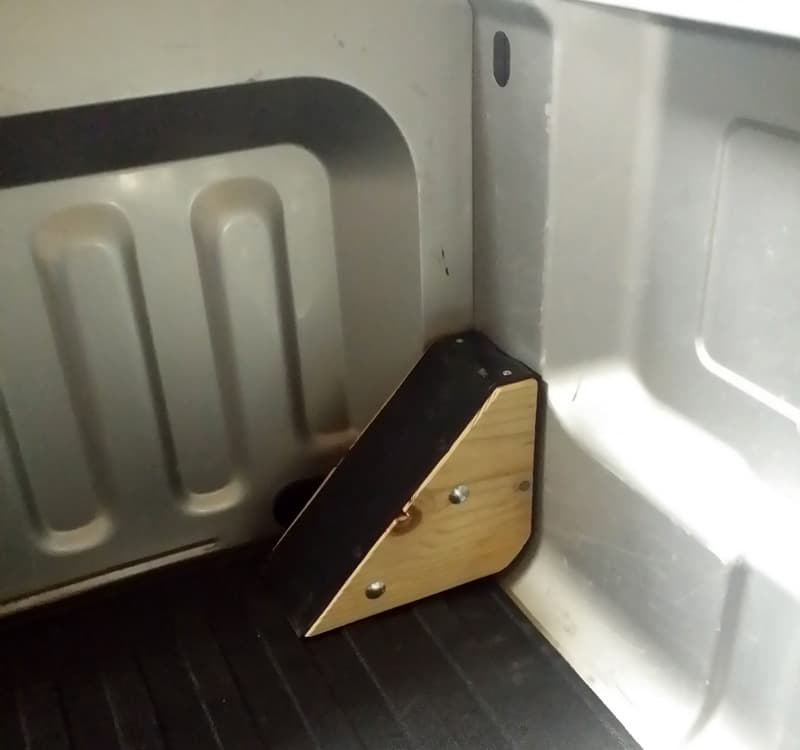 While not commercially made, these look and function great for my nearly 5,000-pound truck camper, and they’re totally removable.  They do not interfere with the bed mat and no new holes needed to be drilled in the bed of the truck.

The guides work perfectly.  The anchor method is fantastic as it holds each alignment block to the bed.  This is important.  When the camper is removed, if the blocks can move they’ll jam themselves between the bed wall and the camper.  Usually they release in spectacular fashion with the camper moving much more than expected. 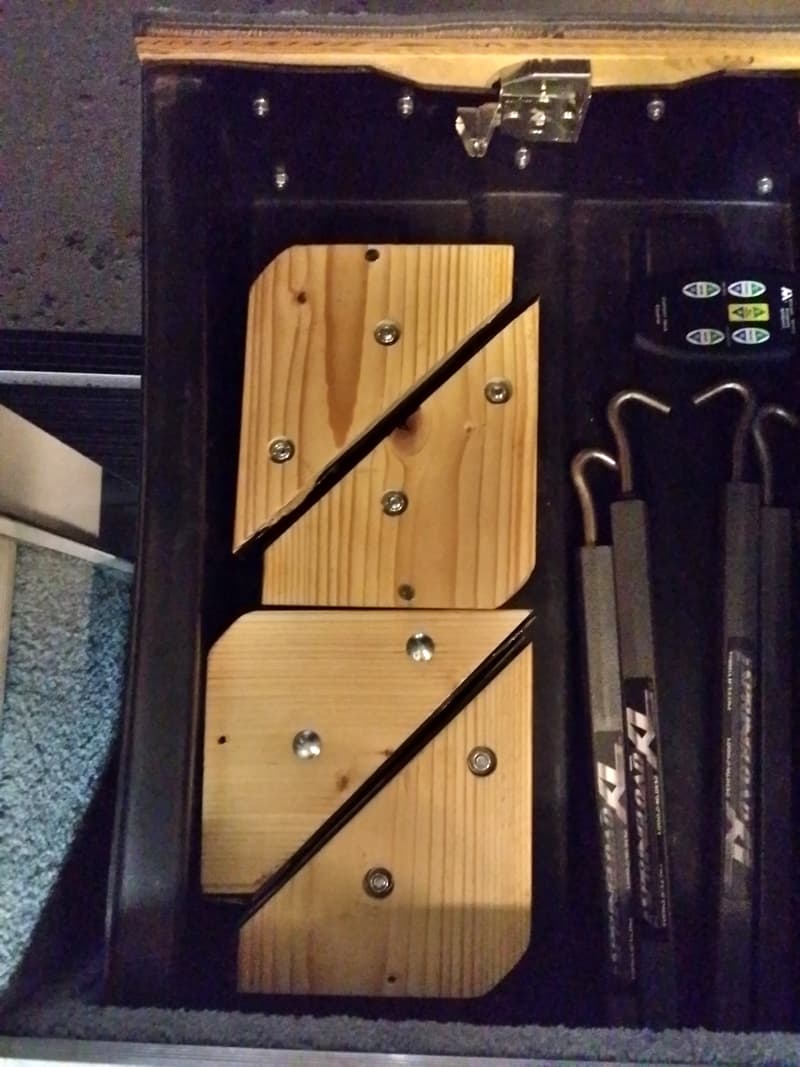 When loading my truck camper, I sometimes hit the wheel wells inside the truck bed and dent or scratch the bed liner. 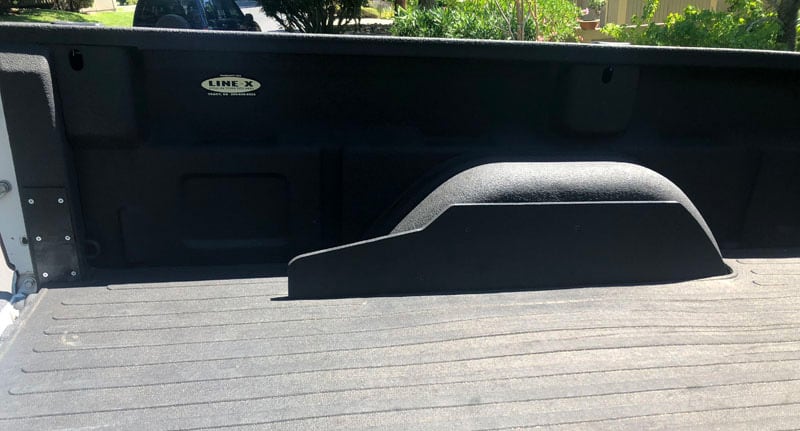 To prevent this from happening, I made guides to engage the camper earlier and act as skid plates for the wheel wells and bed liner.  I also installed a skid at the rear of the truck bed where the camper frame was scraping off additional bed liner. 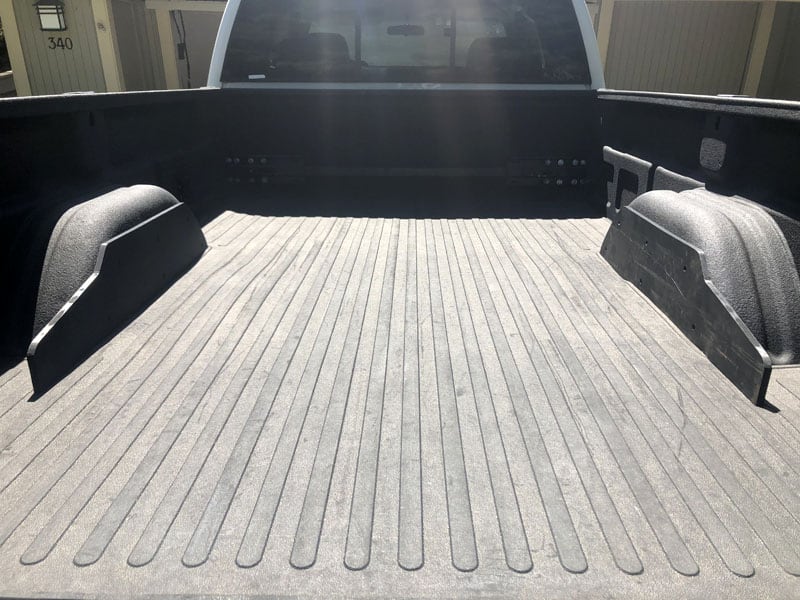 For this modification, I purchased a marine-grade composite material called Starboard and cut it to shape with a skill and jig saw.  Then I drilled and counter-sunk flat-head bolts and bolted them to the wheel wells.  I also drilled and inserted nutserts at the rear for the small skid located there. 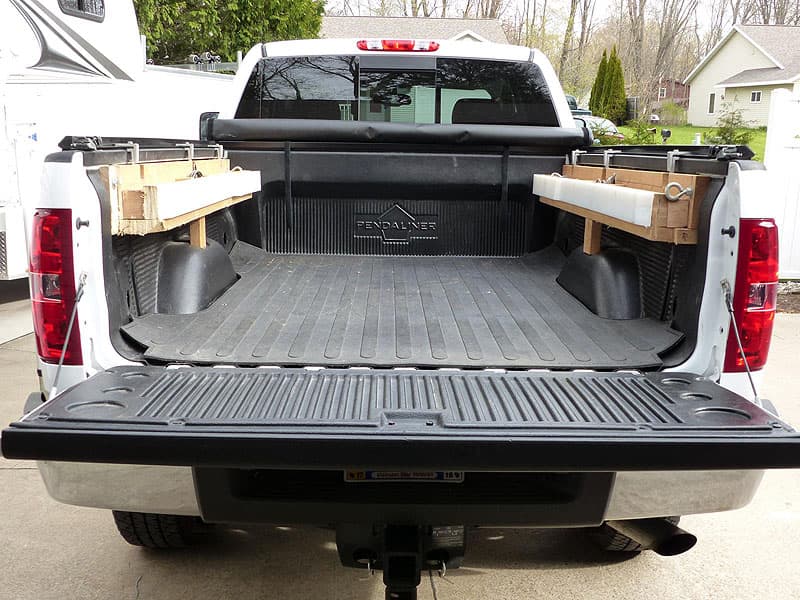 I did this bed rail modification to keep the camper centered in the box.  I originally made this mod for hauling bicycles. 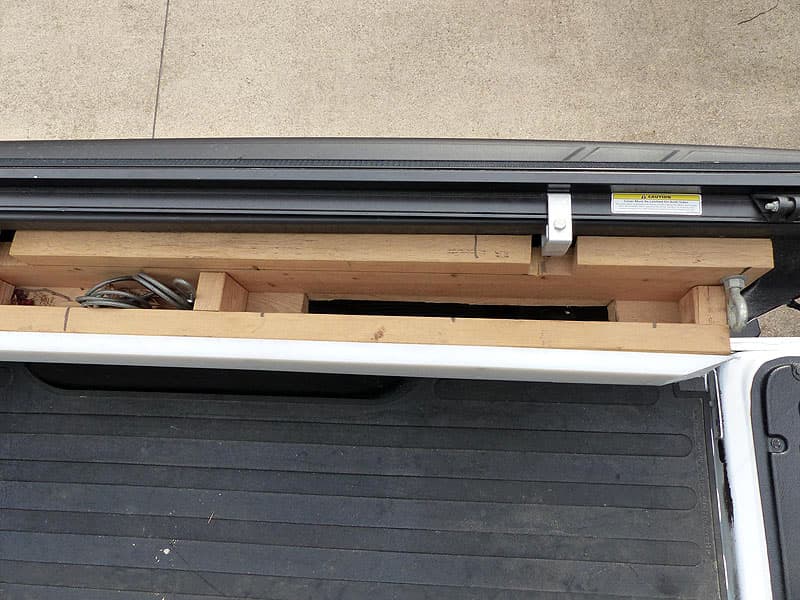 When I got a camper I decided to put plastic slides on the truck to center the camper when loading. 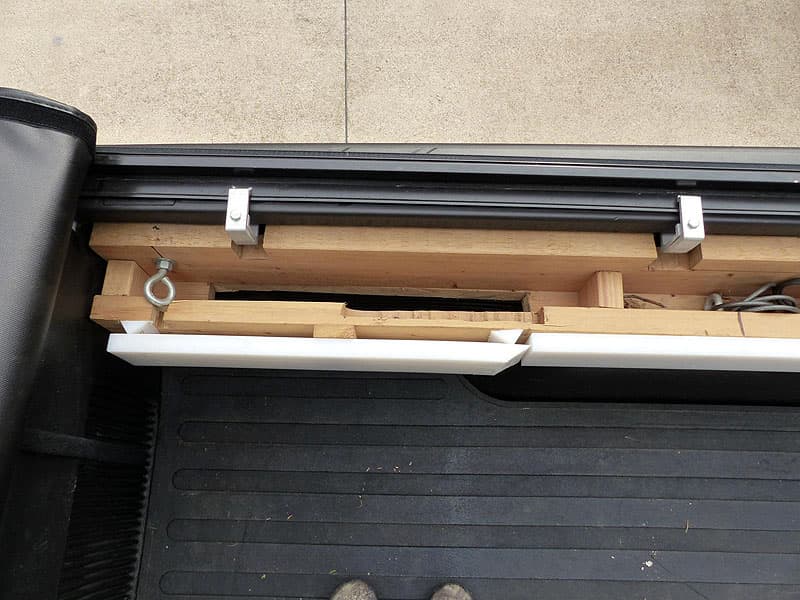 The GM pickups are wider in the front of the box than in the back.  The mod makes it a little more difficult to load because I made it one inch wider on both sides. 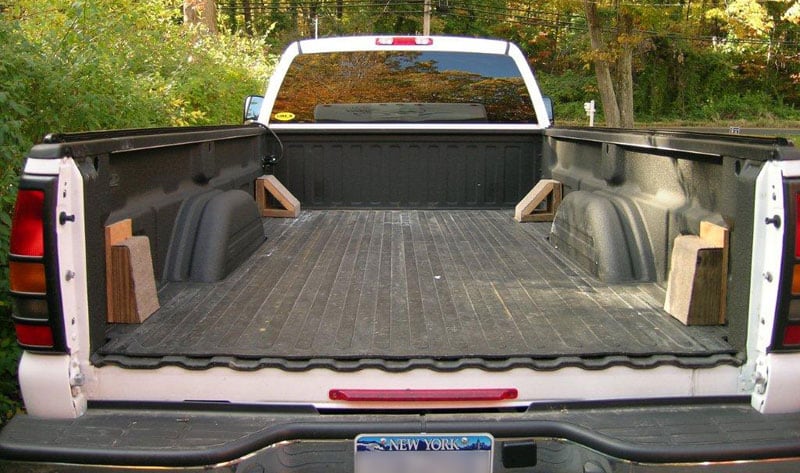 I use centering blocks for easier loading of the camper and it keeps the camper from shifting while traveling. 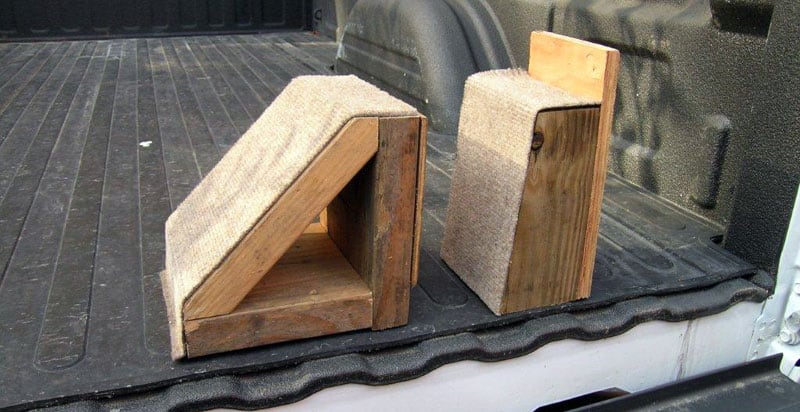 I made the blocks from some scrap wood and covered them with carpet.  They work exceptionally well and were easy and inexpensive to make.

Beauty Parking with Harvest Hosts
Coasting Through Maine On the Cheap