Covers have been constructed, tailgate solutions found, solar systems synthesized, a keyboard built into a dinette, and more.  Choose your favorite Mega Mod, and vote. 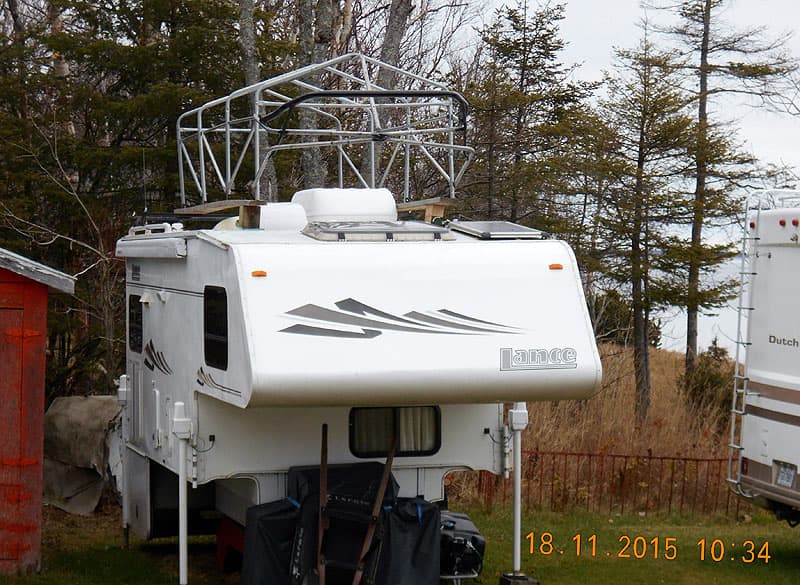 I then covered the garage frame with a tarp.  Another approach would be to pick up a truck garage cover that’s 12-feet x 20-feet x 8-feet. 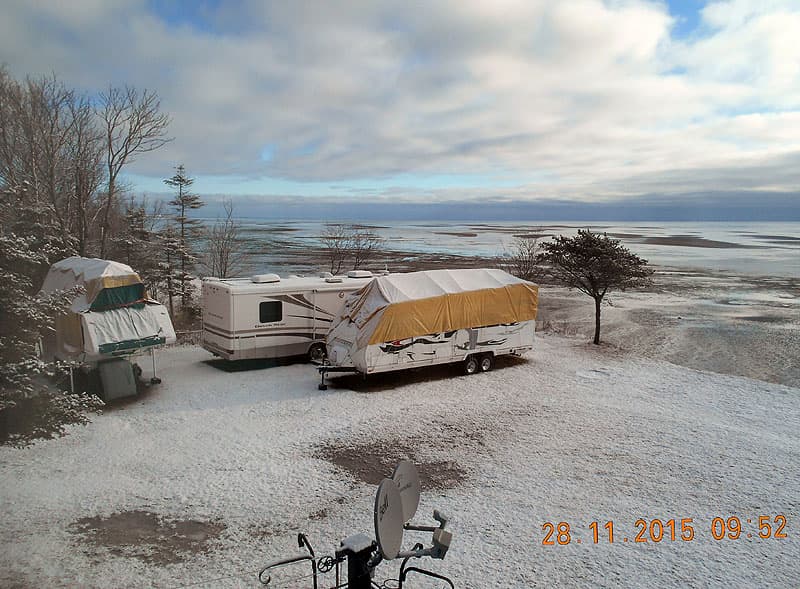 It took me 10 hours to complete and cost $300.  In my opinion, the skill level of this mod is medium. 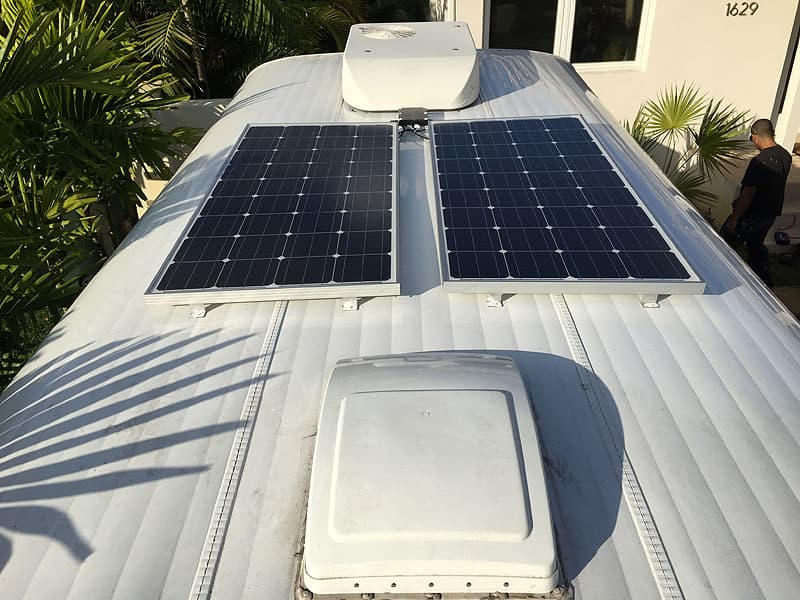 I wanted to have a solar power system that would enable me to extend my time time off-the-grid.  Since I was going to have to make DC wiring runs for solar, I also made AC wiring runs to install a Mach 8 Colman air conditioning unit at the same time. 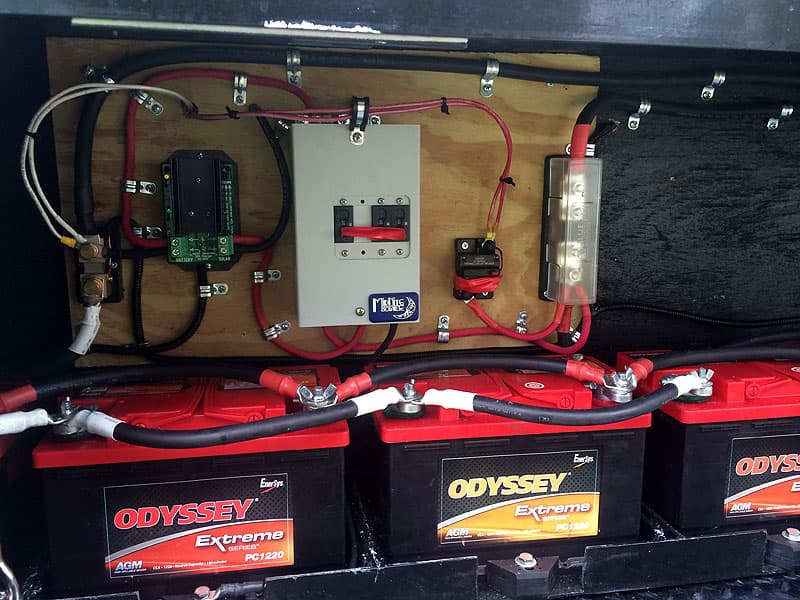 Initially I purchased an off-the-self system but, after running into an article on solar power, I realized that everything I thought I knew about solar was wrong.  The only items I kept from the off-the-shelf-system were the solar panels.

I purchased a Bogart Engineering smart charger that allowed me to customize the charging profile to the battery manufacturer’s specifications. 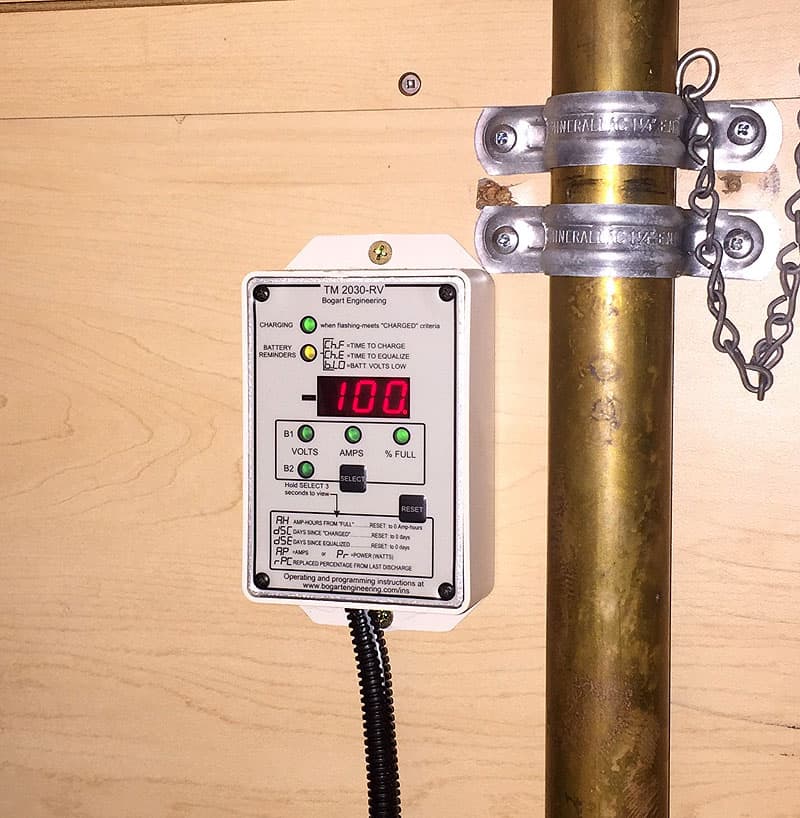 I had to resize the cables from 12 AWG to 6 AWG to take care of voltage drop over a 22-foot run and build a control panel and cables from scratch for my four house batteries.  I also put in provisions for a future inverter. 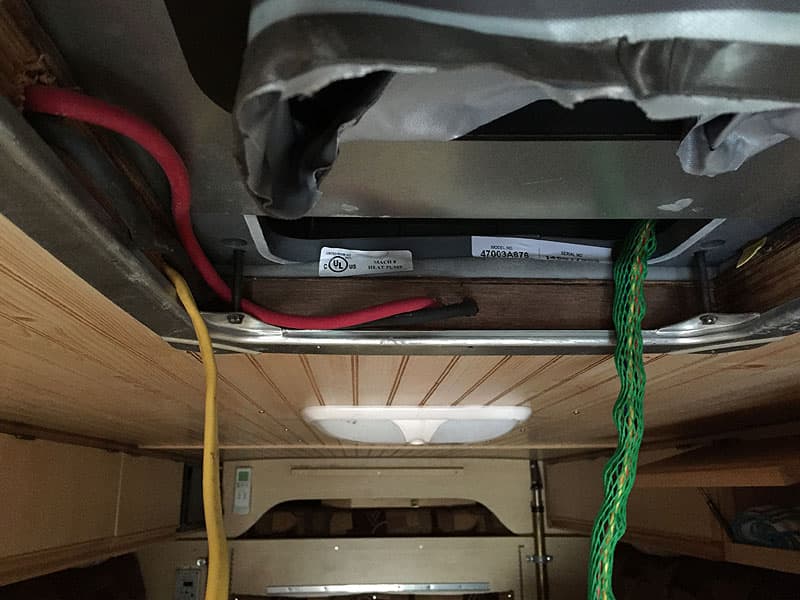 The installation was a challenge because it required to blind drill through the inside of the framing of the roof; a 2-inch space in two separate locations.  Both were done from the 2-foot x 2-foot roof opening for a exhaust fan or air-conditioning unit. 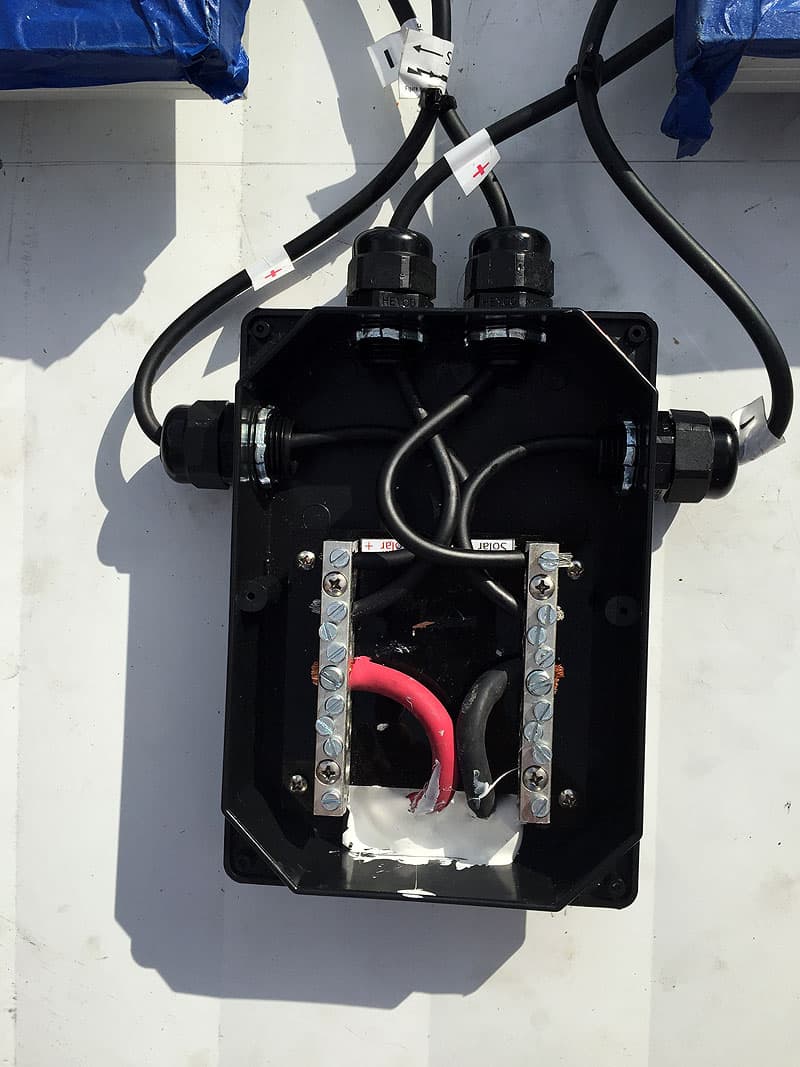 The first was a 20-inch drill for the cable run from the control panel, which was located on the outside of the Alaskan, and the second was a 12-inch to a power junction box on the roof. 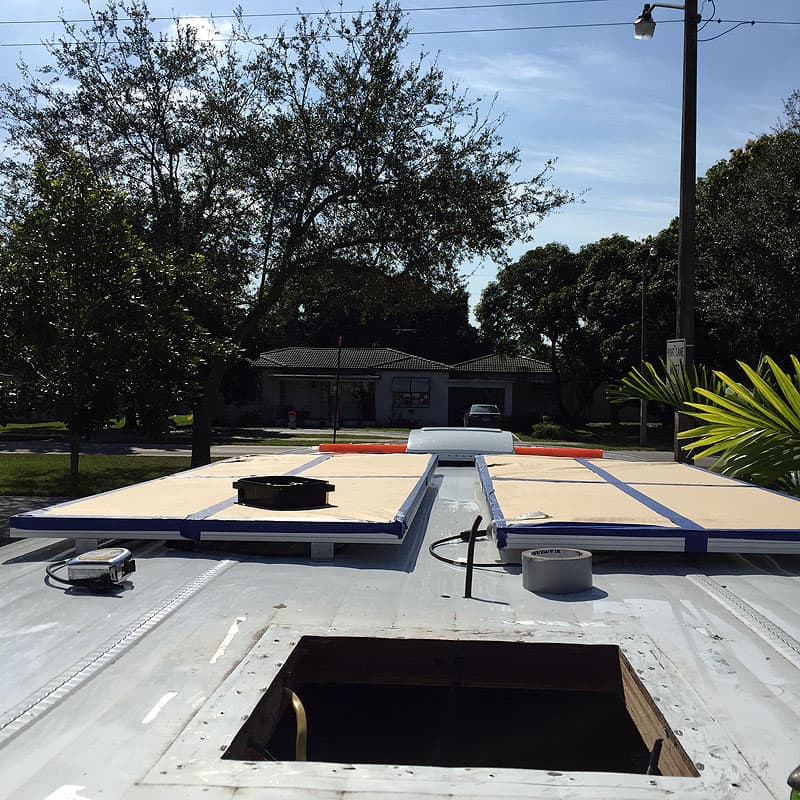 The Alaskan has a wood frame roof on 16-inch centers so the Z mounting brackets on the panels had to match the spacing of the 2-inch x 2-inch frames.  I used 1 1/2-inch wood screws and put a very high bond (VHB) tape on the Z foot to keep moisture from entering the roof and help carry the wind load.

It has worked out well running my biggest load; a Norcold DC refrigerator 24/7.  However, I want to purchase a small generator for charging the batteries on cloudy days and to run the air conditioner when needed.

It took me 45 hours to complete and cost $2,300.  In my opinion, the skill level for this modification is medium for the use of the tools and hard for some technical expertise and components. 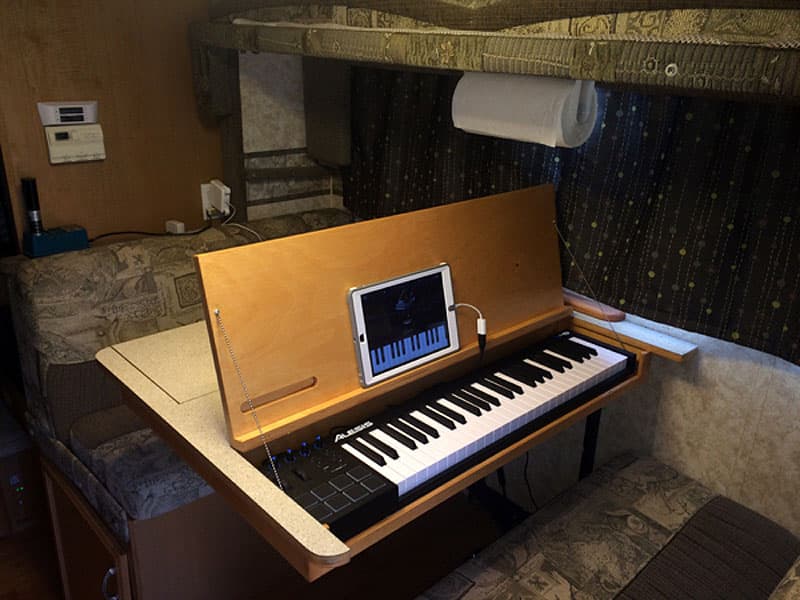 We are currently traveling our with two children in a truck camper for a full year.  A significant chunk of our daily routine is dedicated to education and our homeschooling curriculum, which includes music.

One of the instruments both kids are learning to play is the piano.  Of course, it’s no simple task to squeeze a piano into a truck camper.  So, as part of the preparation for our trip, I researched compact keyboards and came across the Alesis V49.

This MIDI keyboard is compact enough to travel with us.  It has a great feeling keyboard with velocity sensitive keys, is USB powered, and can play on and through our iPad.  From there it plays through the truck camper’s stereo speakers, or through headphones.

The big challenge, of course, was finding a place in our tiny truck camper to store a MIDI keyboard.  After some searching and measuring, I realized that the keyboard was about the same length as the dinette table, so I decided to make a new tabletop with the keyboard tucked away inside of it. 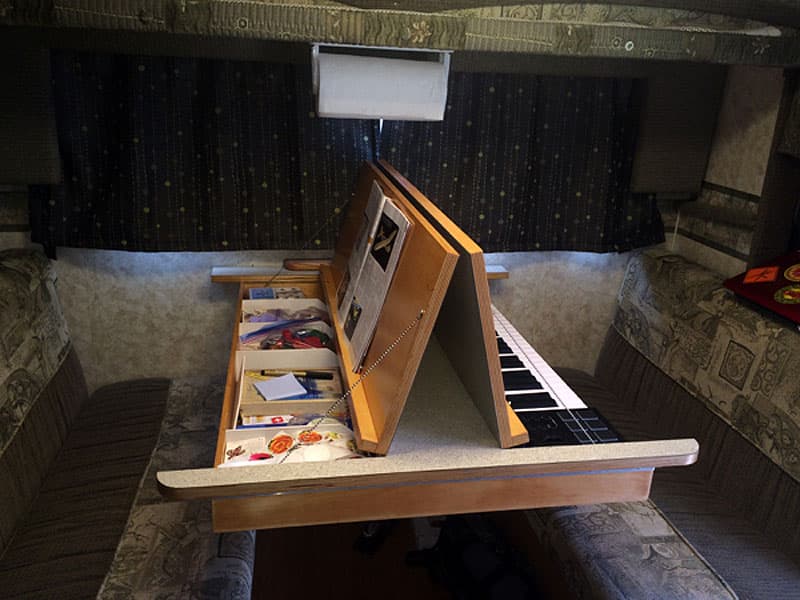 I chose to create two separate storage compartments within the table; one for the keyboard and the other for school and craft supplies.  Accordingly, the tabletop has two doors.  When open, each door has small ledge which can also be used to support a book, classwork, or an iPad. 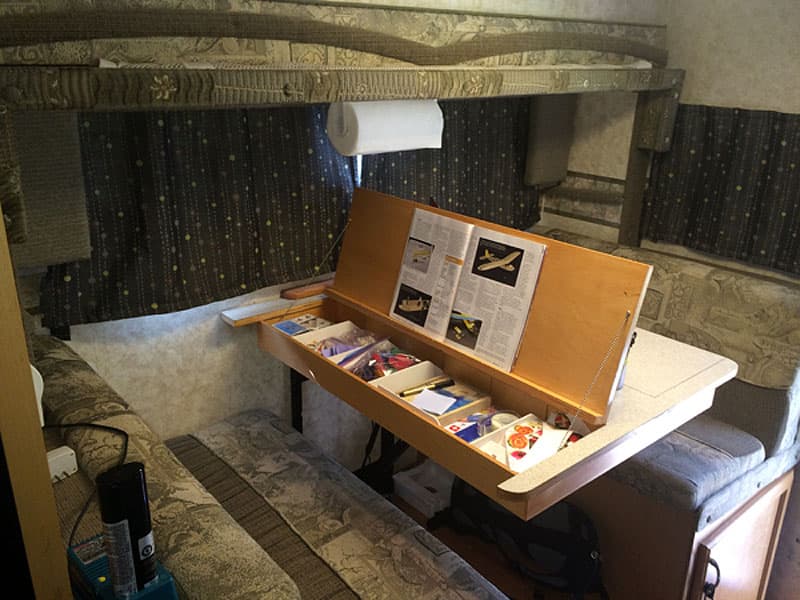 I fabricated the new tabletop entirely from scratch using 3/4-inch 13-ply birch for the top and 3/8-inch 7-ply for the boxes.  The top surface is Formica high-pressure laminate and the interior and exterior surfaces have been finished with a durable satin polyurethane and stain.

For times when the kids are working on projects (or meals) that might get messy, I made a pair of 1/16-inch thick LDPE cover sheets that are fitted to the tabletop.  When not in use, these sheets are stored behind the dinette’s back cushions.

The whole family uses this table every single day.  We eat breakfast, lunch, and dinner on it.  We also do home schooling, craft projects, and practice piano lessons.  I even composed this Monthly Mod Contest application on it.  In the evening, the dinette converts into my daughter’s bed.

This modification took 36 hours to complete and cost approximately $600 including the MIDI keyboard.  In my opinion, this mod was hard because I had to ensure that everything would fit.

The entire assembly was designed in CAD (SolidWorks) before a single piece of wood was cut.  Creating the table top and boxes required extensive carpentry skills, especially pocketing the hidden hinges.  Specialized tools were needed to apply the Formica laminate and polyurethane finish.

I figured out a way to keep the tailgate on the truck when the camper is both on and off. Now, when we remove the camper from the truck, it takes about 2-minutes to disconnect and close the tailgate.  Then it looks like a complete pickup truck. 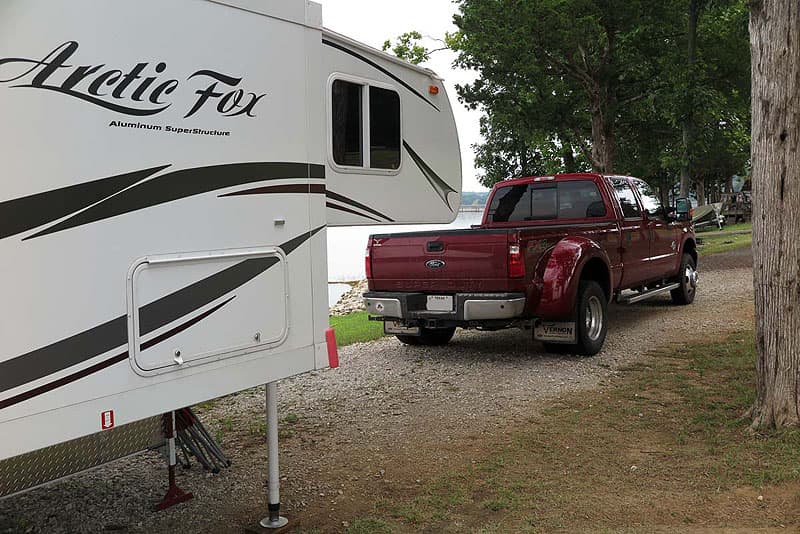 I had previously installed angle iron rails in the bed of the truck to keep the camper in place, so a small extension to support the tailgate was a fairly simple addition.

The clear underside area of our camper extends 24-inches past the end of the truck bed, which is enough room to permit the tailgate to fit unobstructed under the camper without braces or tanks in the way. I did not include complete construction details since every truck and camper would require different sizes.

The under view of the truck with the camper on, and the tailgate on and extended 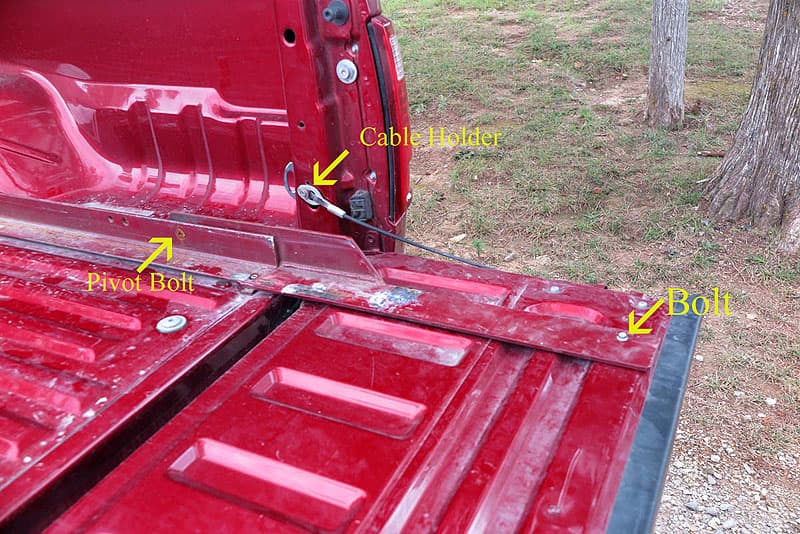 This photography shows the rail extension flipped out and bolted to the tailgate.  A bolt plate was added to the inside of the tailgate (not shown).  A second cable bolt was added to hold the cables out of the way when they were not holding the tailgate in the normal configuration.

The cables that normally support the tailgate in the open position had to be disconnected since the camper would hit them and the cables hold the tailgate slightly above level.  A different method of holding the tailgate up was required.

A swing out bracket was added to the angle rails to hold the tailgate in the level position and off of the bumper.  The brackets were constructed from 3-inch x ¼-inch flat iron.  I made two at 24-inches and two at 17-inches.  The metal and bolts were about $30 and an additional $10 for the welding.  A short mounting bracket could be used instead of the angles which I have installed in our truck. 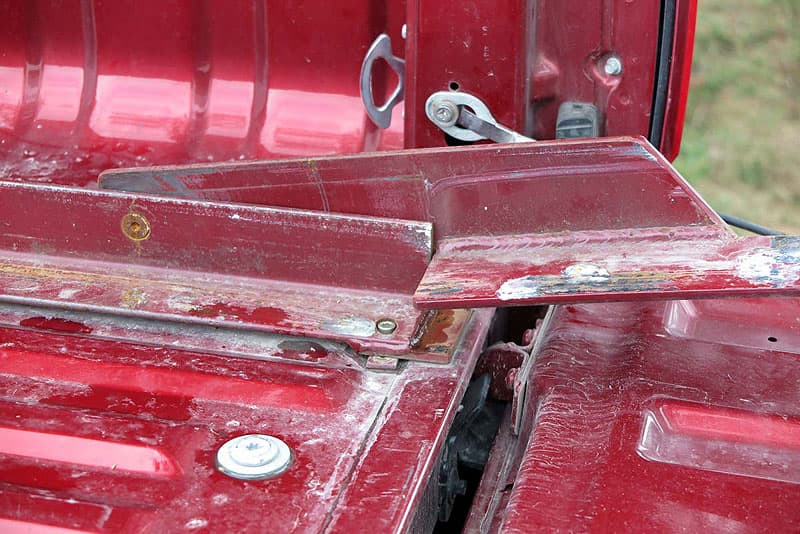 The extension pivots out on the bed rails and then the tailgate is bolted to the extensions. 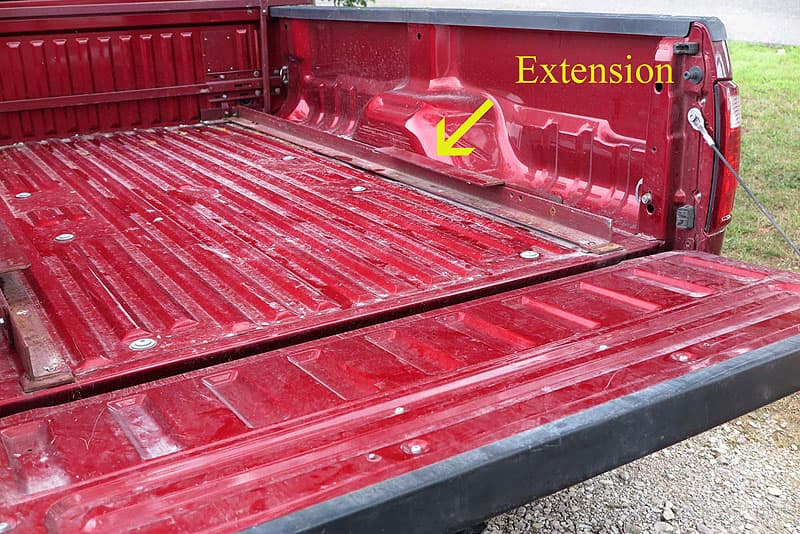 This photograph shows the rails in the truck with the extensions folded forward.

Since most projects like this are 90 percent design and 10 percent doing, it was months in design and the construction only took about 2 days to complete.  After several camping trips with the tailgate on the truck, I wouldn’t change a thing

It took me 15 hours to complete and cost $40.  In my opinion, the skill level of this mod is hard.

My wife needed an improved step to safely enter and exit the camper.

We also needed additional storage carrying capacity when not towing our boat or enclosed car trailer. 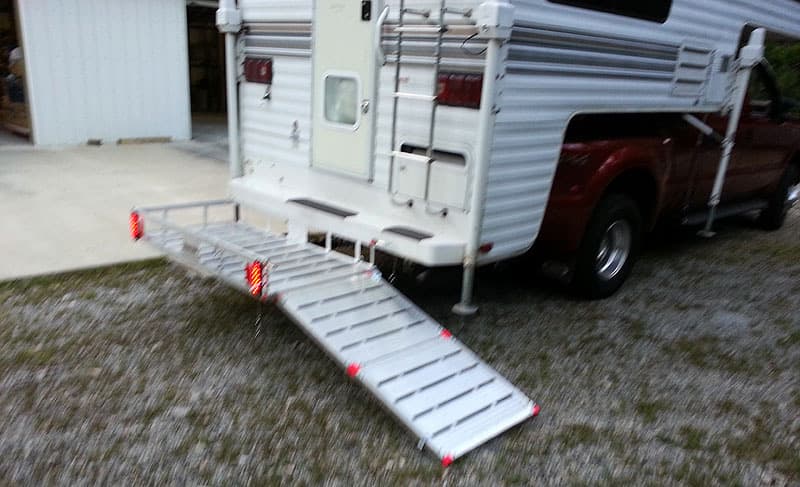 I bought a hitch-mounted cargo carrier with a folding ramp.  Then I modified it to connect to a Torklift SuperHitch with a Super Truss for increased stability.  I added LED lighting for increased visibility.

It works well.  Since the initial install, I have purchased a folding step to use instead of the ramp and added stabilizer jacks designed for a tent camper. 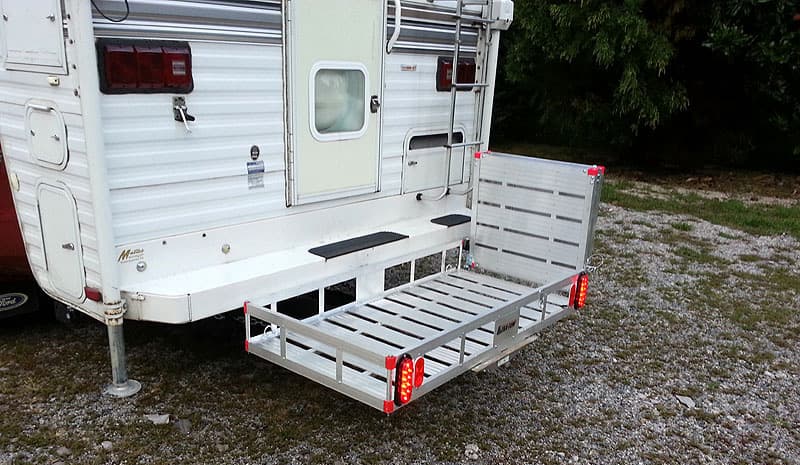 Now the assembly does not wobble when the unit is parked and we use it for a step. 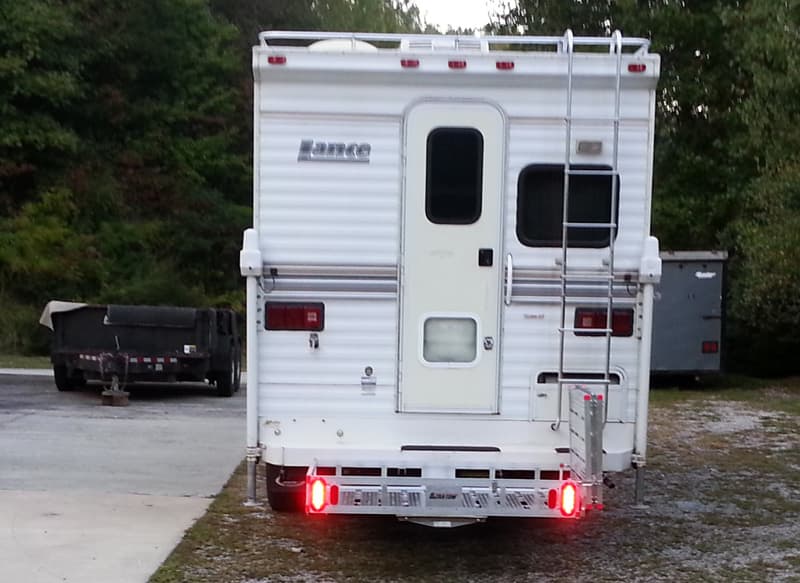 It took me eight hours to complete and cost $700.  In my opinion, the skill level of this mod is medium.

At this height the trailer is level with the truck and looks consistent with the rest of the rig.  The other factor was wanting to keep the hitch high enough so the that it wouldn’t hit the road surface when going through dips and rough trails. 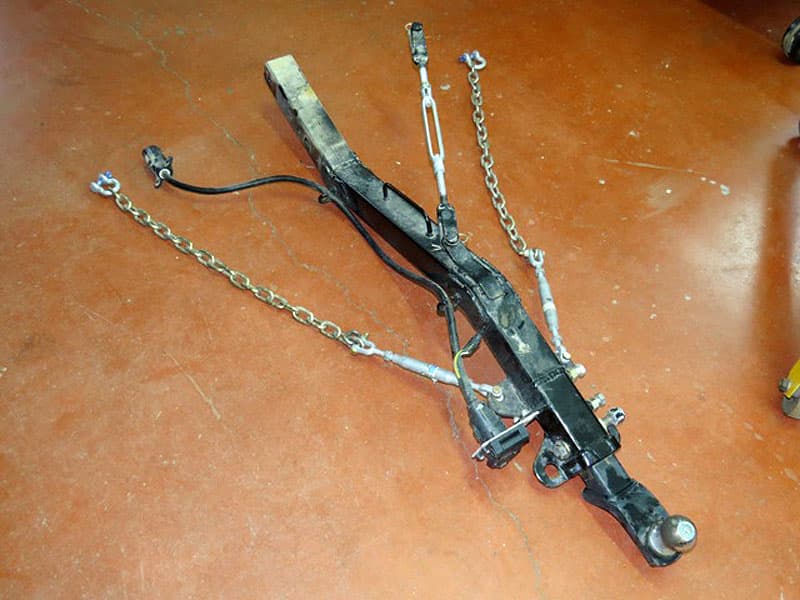 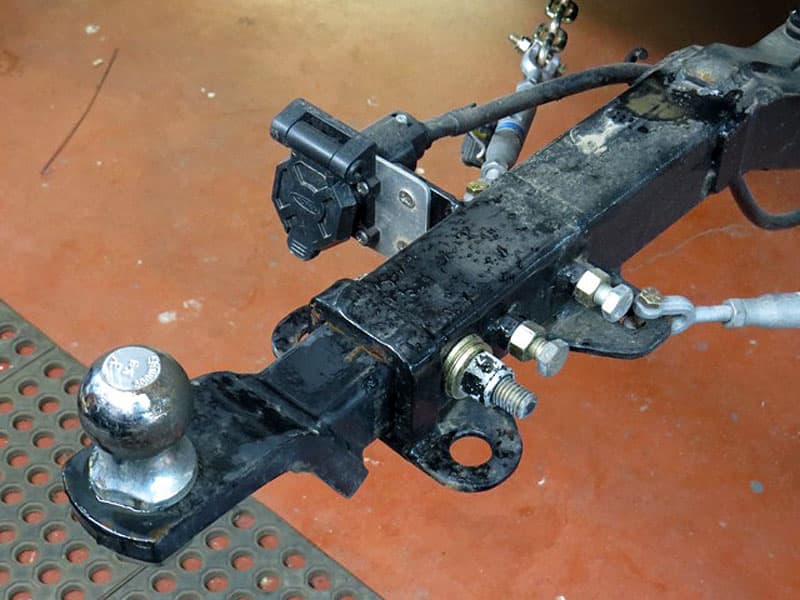 After a series of measurements were made, a simple drawing of the design was the result.

Another thing that was important was that the hitch was not to interfere with the Fox Landing step when it is down or up.  The landing has a curved cut out that seems to have been made to fit a hitch extension.  Thanks, Northwood.

From the pictures you can see there are quite a few parts that need to come together for the hitch extension to fit right and be strong enough to take the load of a 2,000 or 3,000 pound trailer with a hitch weight of 150 to 200 pounds.

I also built turnbuckle ties that connect to a frame cross member at the upper rear of the truck above the spare tire.  The two side chains and turnbuckles connect to the rear tie-down mounts.  The tie-down mounts were custom built to fit the truck because of the type of running boards the truck had on it when we bought it.

The funny thing with the tie-down mounts was that we built them sight unseen before picking up the camper. They worked perfectly and didn’t require any changes from the first build.  Luck was on our side with them.

The hitch has an extension for the seven pin RV plug, so the trailer plug fits where it is supposed to.

The hitch extension is bolted in the pinholes for the stinger and the truck hitch is also a 5/8-inch bolt.  Anti-rattle pinch bolts are also used on the sides and bottom of the stinger hitch so there is no noise from loose parts.  I would install these on any hitch.  When in use, they get rid of the constant tap and squeak from most hitches.

This has been a great mod and it turned out really well.  I wouldn’t change anything from the original design.  We keep the camper on the truck throughout the year.  So far the hitch has stayed on the truck as well.  With the Fox Landing up, the the hitch sticks out only about eight inches.  With it down, it is completely covered.  With the Fox Landing step down it provides an easy and safe way to get into the utility trailer when stopped.

It took me eight hours to complete and cost $120.  In my opinion, the skill level of this mod is hard.

If you’d like to enter mods into TCM’s Monthly Mod Contest, click here.  You can enter as many mods as you want, at any time.  Good luck mod makers!