The Aurora Hunter is back in a remarkable video produced by CNN’s Great Big Story.  Here’s an up-close look at how Todd captures Alaska’s incredible northern lights from his pop-up truck camper.

One month after launching Truck Camper Magazine in 2007, we interviewed Todd Salat, a self-described Aurora Hunter from Anchorage, Alaska.  With his 1994 Starcraft pop-up truck camper, Todd ventured deep into the Alaskan wilderness, late into the night, and captured some of the most incredible aurora photographs ever seen.

Almost ten years later, we came across a fantastic video on CNN’s Great Big Story featuring Todd and that same 1994 Starcraft truck camper.  He’s clearly still at it, and still taking stunning aurora images purchased by nature enthusiasts and art collectors from around the world.

Congratulations Todd!  Please share your secrets on how to keep an old camper going strong.  If you can get a 1994 pop-up through a decade of Alaskan winters, you can do almost anything!

“In the winter I spend hours upon hours in the cold.  Even with my parka and military issue bunny boots, eventually the elements wear you down.

Of course the northern lights don’t care so I’ll stand out and shoot them as long as they’re dancing. After that there’s nothing better than hopping into the camper, turning on the propane heat, and cooking up a meal.” 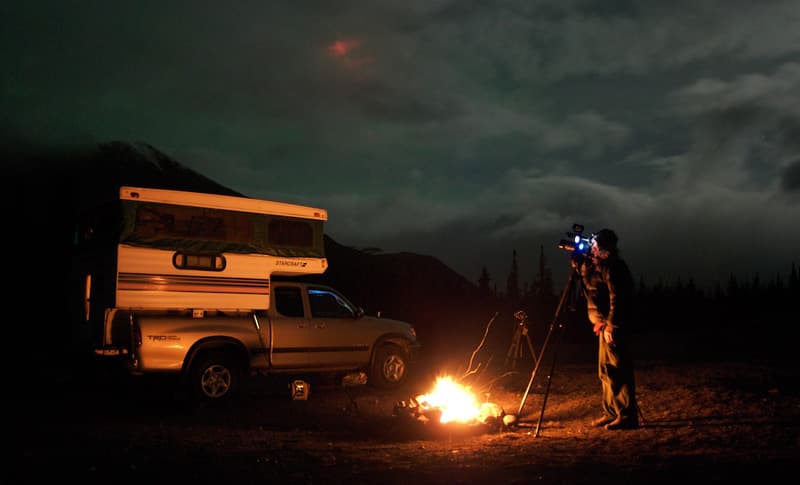 He also told us how he got into Aurora Hunting, an incredible and inspiring story all by itself.

“I spent seven years in the corporate world working as a geologist for Arco.  At that point I started photographing the northern lights as a hobby.  My very first picture had beautiful green lights dancing across it.  Wow.  The hobby became a passion, which became an obsession.

I was burning the candle at both ends. I remember seeing school buses going by and thinking I’d better get an hours sleep before work.  Something had to give.  I wanted to be free.

So I resigned in 1996, took my life savings, and hitchhiked New Zealand for five months.  Then I drove all the way around Australia for seven months in a Ford Falcon station wagon I called the Millennium Falcon.  To me it was all very natural.

My plan was to get into a truck camper when I got back, drive to Alaska, and be a full time photographer.  In 1996, I found a 1994 Starcraft pop-up camper. I’ve nicknamed it the Rejuvenator.  For me it’s perfect.

The secret is being there, being awake, and being ready. There are people who have lived here in Anchorage who have never seen the northern lights. You’ve gotta keep one eye on the sky.  My wife and I have seen them from Anchorage hundreds of times.  My motto is be there, preserve the moment, and share it.  That’s my secret.”

In 2009, we did a follow-up interview with Todd titled, “Auroras In Motion”.