Mike Bachman shares an incredibly fortunate truck camping story about hitting ice at altitude, flipping over, and walking away.  What happened next is something you have to read, to believe.

Unless you grew up in a warm southern state, chances are you know about the one form of precipitation even professional drivers won’t mess with; freezing rain.  Often totally invisible on asphalt and concrete roadways, black ice – as it’s called – can instantly render a vehicle uncontrollable and causes thousands of accidents every year.

Thankfully, the seriousness of freezing rain, and the conditions in which it happens are well known.  Meteorologists often predict these conditions well in advance, warning the government, school systems, employers, and commuting public to take special caution, or avoid travel all together.

Most folks know to heed the freezing rain warnings, or pull over the instant they suspect freezing rain may be falling.  Like hurricanes in Florida, tornadoes in the Midwest, or earthquakes in California, freezing rain and black ice are a fact of life for millions, and cause nothing more than delays, and the occasional down tree limb or power outage.

However, traveling through areas of elevation can add an interesting and potentially dangerous wrinkle to the threat posed by black ice.  Temperatures decrease approximately 3.3 degrees Fahrenheit for every 1,000 feet in elevation you ascend.  If the temperature at the base of a 2,000 foot mountain is 35 degrees Fahrenheit (3 degrees above freezing), it will be just over 28 degrees at the pass (four degrees below freezing).  This means what may have been cold rain going up the mountain, can be freezing rain at the summit, or the other side.

Mike Bachman’s story of ice at altitude is a good one.  Yes, Mike flipped his rig when he hit the ice, but he and his hunting buddies walked away unhurt.  Mike’s story is now a cautionary tale for anyone who goes truck camping in the mountains near freezing temperatures, or might hire a tow truck.  Thank you for sharing your story, Mike.  We will all be safer for it.

I am convinced that my Four Wheel Camper saved my life.

This past November, I was going hunting with my friends and my dog.  It was a snowy day and we were driving up a mountain pass.  What I didn’t realize was that ice had accumulated on the roadway on the other side of the mountain pass.

When my truck camper rig hit the ice, the road turned, but the truck didn’t.  Instantly we went over a five-foot drop-off, flipping the truck onto the Four Wheel Camper, and crashing down the embankment.

When the truck finally came to a stop, we were all still upside down.  I asked if everyone was okay and then dialed 911.  It was so icy at that point that the emergency vehicles couldn’t get up the mountainside. 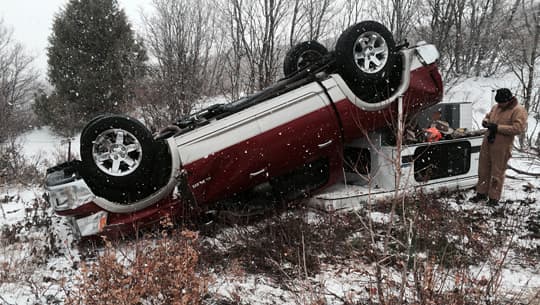 Luckily, everyone was fine with no major injuries.  Since we couldn’t do anything, we got some sandwiches out and ate lunch.  Even with the truck and camper upside down, the Four Wheel Camper’s back door opened and worked.  It was intact.

I hadn’t thought about Four Wheel Camper’s aluminum frame until that point in time.  I never considered its strength until the accident.  I was amazed that the camper stayed together as it did.  It had absorbed a five-foot fall down a hill, at speed, with two tons on top of it.  And there we were, with the back door open and working, eating lunch.  That really speaks to Four Wheel Camper’s construction.

I am convinced that the camper saved us from injury, or worse.  Had the camper frame broken apart or failed, we would have absorbed that crushing force.  Thankfully, the Four Wheel Camper withstood the impact, stayed intact, and kept us safe.

I did wind up going to the hospital to get checked out.  My head had hit the roof of the truck cab and I wound up with a concussion.  That shows how strong the impact was.

That afternoon my buddies and I decided to go hunting since the emergency vehicles couldn’t get to my vehicle.  My friend’s wife came and picked us up at the end of the day when the weather improved.

Later that day, a local company picked up my truck and camper with a big tractor, turned the rig right side up, and towed it to a nearby facility. 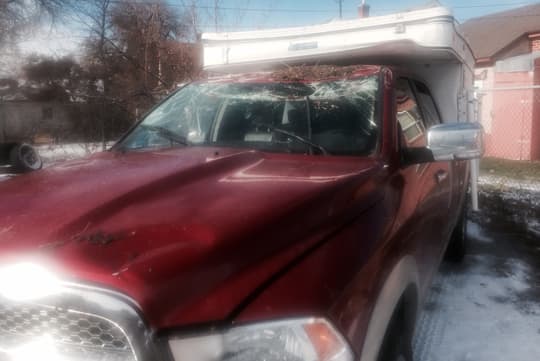 The truck was barely hurt.  On the camper, the only thing seriously damaged were the jacks, which had broken off, the turnbuckles, which were destroyed, and the camper roof had come unlatched.  The battery still worked.  The refrigerator still worked.  Everything else worked. 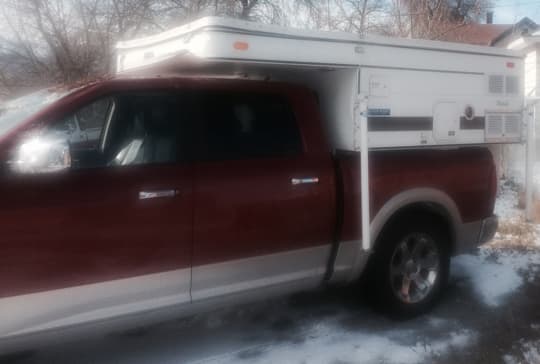 At that point I took pictures and sent them to Four Wheel Campers.  They told me that they could fix my camper for about $2,000.

When I later went to the repair shop to take a look at the truck and camper, they claimed there wasn’t a camper on the truck when it arrived.

For two weeks they didn’t know where it was.  Finally, they found my camper in an impound lot.  Since there was no name or registration on the camper, the impound lot didn’t know who it belonged to.  When I went to claim the camper, it was beaten up much worse than after the ice accident. 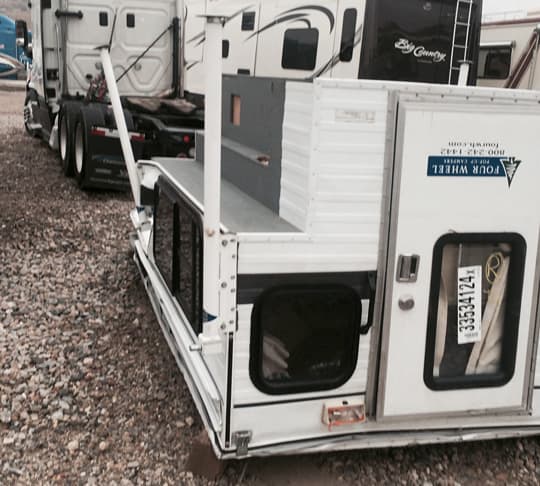 Three weeks after the accident, my friend saw my beat-up Four Wheel Camper in my yard.  He told me that he had seen a truck camper fly off a tow truck on I-I5 and slide down the freeway.  After the ice accident, the turnbuckles had been destroyed leaving the camper unattached to the truck.  The repair shop hadn’t misplaced my camper, they had left it on the side of the freeway. 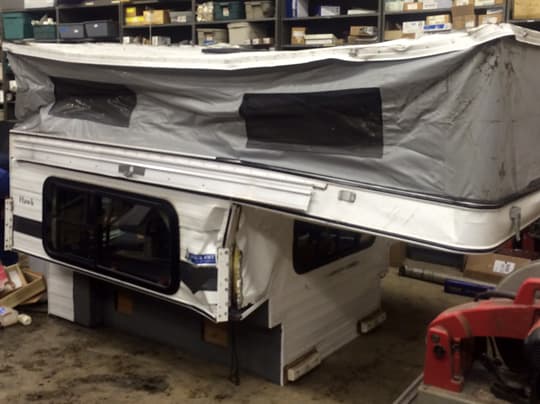 Fortunately, no one got hurt when this happened and a highway patrolman had pushed it off the roadway.  Liberty Mutual never admitted that happened.

Later I talked to another Liberty Mutual representative and she told me that they weren’t going to cover the camper.  I kept calling and eventually got a higher-up person in the company.   He told me that I had to prove to them that they destroyed the camper, or they didn’t want to cover it.  I wasn’t satisfied, so I kept calling back.  He wouldn’t call me back, so I left messages.

I finally got the higher-up guy to answer the phone.  I think he got tired of hearing from me.

Well, have you ever seen the Liberty Mutual commercial with the Statue of Liberty, and a car named Brad?  Well, in the commercial, Brad the car gets totaled and Liberty Mutual talks about how they treat your car like family.

With this commercial in mind, I called my agent and said, “My camper is named Lester, and he was in an awful accident.  He’s like family to me.  Lester and I have been all over the country and Liberty Mutual said they would take care of him.”

Two days later I got a check for the truck and camper.  I wound up buying the truck back from the insurance company for $2,000, and got it repaired.  As you might expect, the poor Four Wheel Camper was damaged beyond repair after it was dropped and dragged down I-15 by the tow truck.  Poor Lester.

Over the past five years, I have taken a Four Wheel Camper to Montana, Idaho, Wyoming, California, Arizona, and Nevada.  It’s a light and easy load for my 2009 Dodge Ram 1500.  Every other truck camper I researched was either too heavy or just not what I wanted.