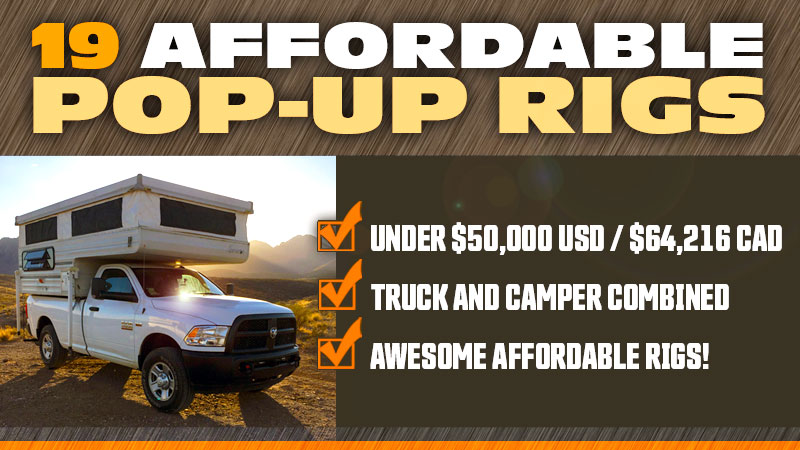 If you go back fifteen years, pop-up truck campers were – almost across the board – a more affordable alternative to hard side campers. Not only were the campers themselves less expensive, but the trucks needed to haul a pop-up camper were also less of a direct challenge to one’s wallet.

In some areas of the pop-up truck camper market, that all remains true. However, the evolution and proliferation of the overland concept has pushed pop-up truck campers into price categories hitherto unseen. Again, fifteen years ago it would have been difficult to spend north of $50,000 USD / $64,216 CAD on a pop-up camper. Today, it’s almost routine.

We have seen this trend expand even within the electrons before you. Truck Camper Magazine has featured numerous pop-up rigs that threaten the $100,000 USD / $127,760 CAD threshold – once thought unthinkable. Of course who would have thought trucks could consume that kind of coin in 2022? They can, and they often do. I have a mind to say it’s getting out of control.

What needs to be avoided is the message that pop-up truck camper rigs are only for the rich. That’s never been true and isn’t true today. As you’re about to see, nineteen fellow pop-up truck campers have put together rigs – truck and camper – for under $50,000 USD / $64,216 CAD. It’s possible, even now.

Thank you to everyone who sent in an affordable pop-up truck and camper rig. Your examples prove beyond a doubt that nearly anyone can get into truck camping. 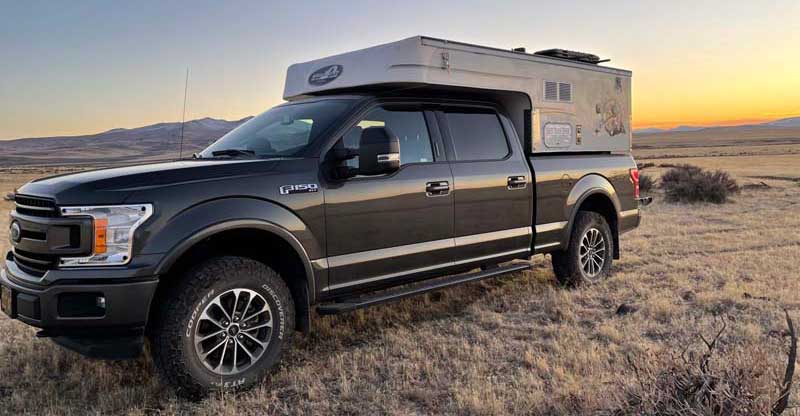 I bought an older used Phoenix pop-up for $3,000 USD. It took a year-and-a-half of looking on Craigslist every day five times a day to find a deal like that. I bought it in 2019.

Affordability and fit were important. I also wanted to keep my tailgate on the truck and stay within the 1,764-pound payload of my half-ton.

I bought my camper for hunting and fishing trips and for taking my family to Yosemite. I took a trip to Overland Expo West in Flagstaff and on short trips down the California coast for fishing.

I am following the Applegate-Lassen Trail through the Nevada desert. I do a one-week couple-hundred-mile trip every year picking up where I left off. I go a little further through the desert every time.”

Yes, affordability was important because I was forced into early retirement.

We mainly camp and ride Arizona from the southwest desert to the mountains of Flagstaff.” 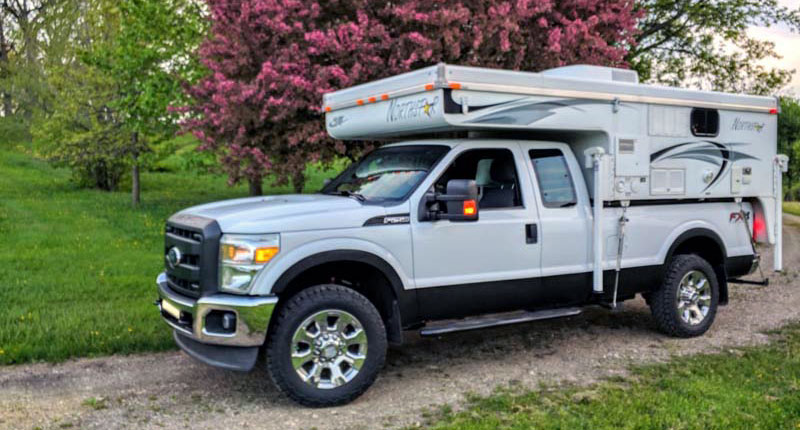 We have been to the Cherokee National Forest in Tennessee and taken a few trips to the Upper Peninsula of Michigan. I also use it weekly for a beach volleyball league I run. With the camper, players can hose off after playing.” 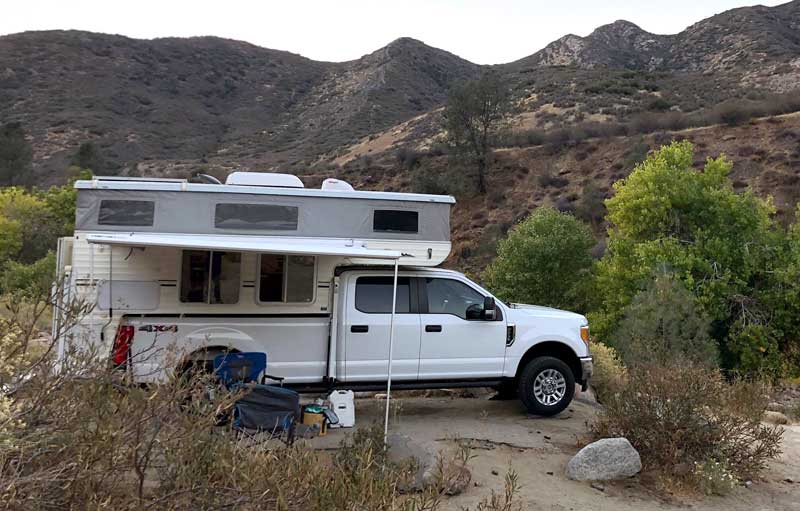 Yes, affordability was important to me. 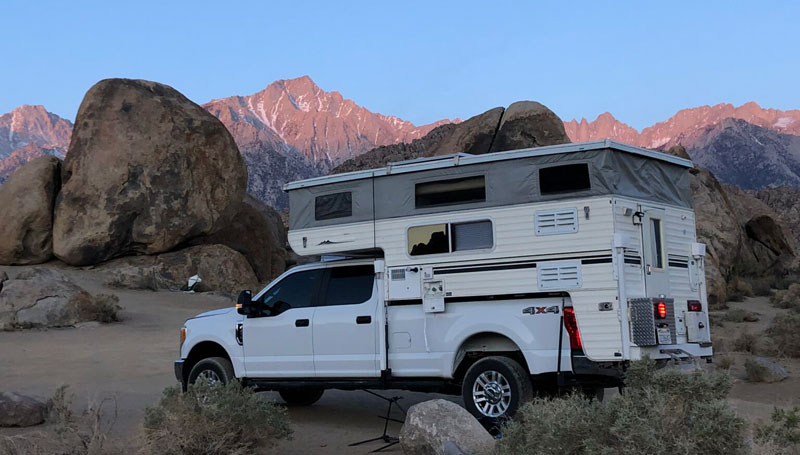 We’ve all through California coast and Sierras, Utah, Nevada, Colorado, and Oregon.”

Our F-250 XL is the most basic of basic models. It has no electric windows, mirrors, or locks, but it has four-wheel drive and works great as a camper hauler.

We knew we wanted a pop-up camper to be more aerodynamic and less top-heavy. And they were less expensive. We found a barely used Northstar 850SC and we couldn’t be happier! Moving up from a tent, the indoor shower, toilet, furnace, and even air conditioner (that we have never used), are all game changers.

We go into the backcountry of Colorado, sometimes in deep snow, and boondock for a few days at a time before moving on to the next site. We can get where most lower clearance vehicles and pull-behinds can’t go.” 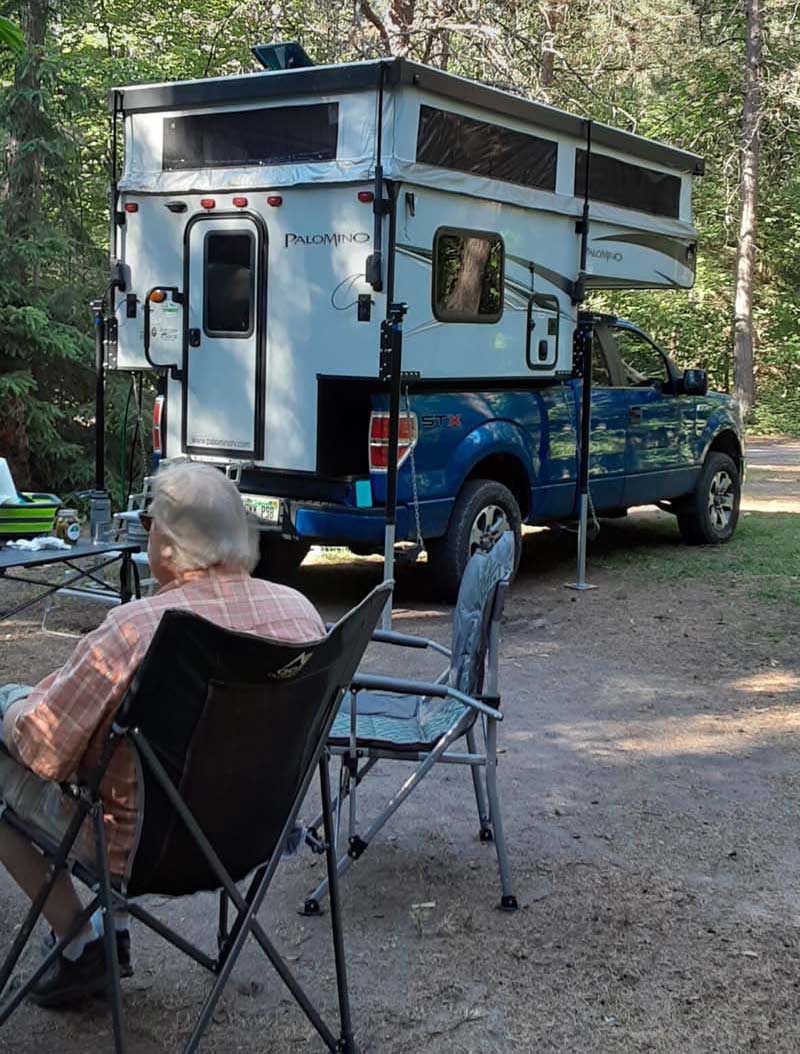 I have camped in Ozark and Ouachita National Forests, Canadian Provincial Parks, the White Mountains, and the Green Mountains. We chose a truck camper for its ease of use. Just get in and go!” 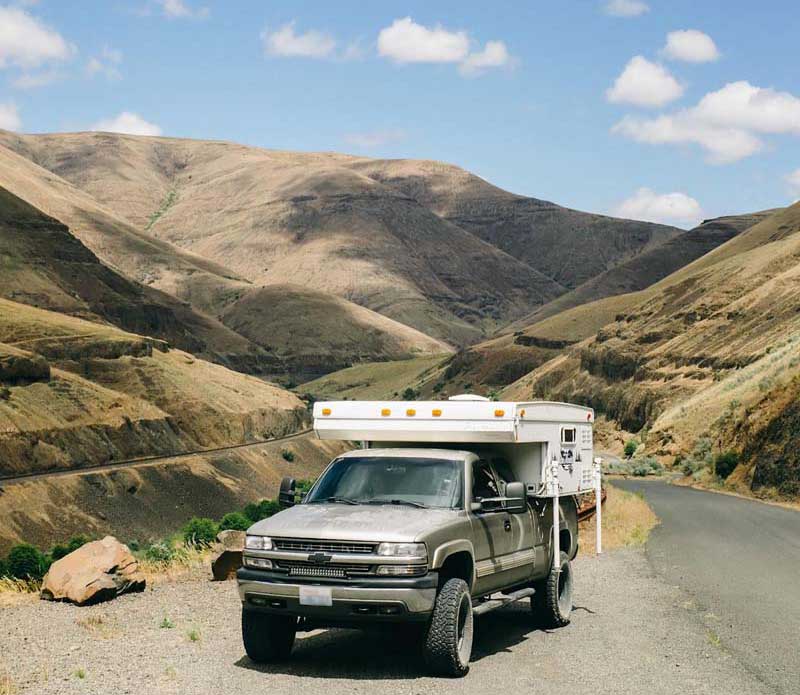 I wanted a GMT800 platform four-wheel drive truck with an LM7 for reliability and the ease of finding parts. For the camper, I was looking at affordability. I wanted a pop-up short bed camper, ideally a Four Wheel Camper. A few of my friends have Four Wheel Campers and they’re awesome. The Starcraft was in excellent condition, with a bit bigger interior than a Four Wheel Camper, and within our budget. 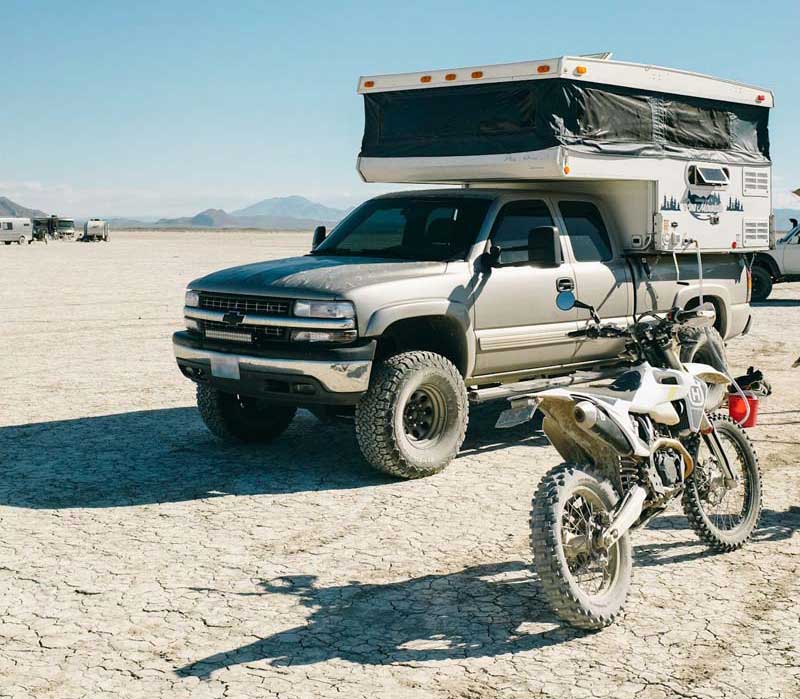 We bought the camper to more easily get our 10-month-old daughter out camping. In the two-months we’ve had the camper, we’ve done a few 1,000-plus mile trips. Starting from our home in southwest Washington, we’ve gone to Priest Lake, Idaho, the high desert in southeast Oregon, and some fishing trips to the Deschutes River.

We specifically wanted a short box camper so I could put my dirt bike behind the camper on a hitch hauler. In the next few months, we’re planning to take the camper out to some of my favorite spots in Gifford Pinchot National Forest, which is very close to where we live.”

I wanted something small to fit in my garage. I jack it up close to the roof so that I can put my wife’s Mini Cooper under it. 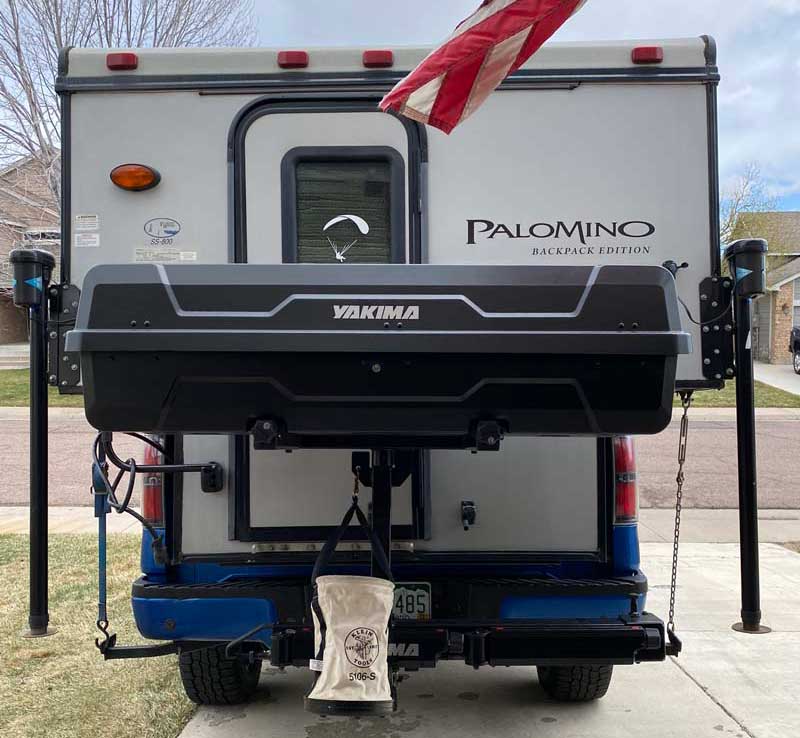 When I go to Utah for my paragliding training, I can stay in the truck camper on the training hill instead of a hotel. Recently, I’ve been using it more for work when I travel out of state to Montana. Of course, it snows on me the whole time dropping down to 15-degrees at night. All is good though. I made some friends who work the front desk at a hotel in Big Sky and they let me go in and use the hot tub.

The camper does stay comfortable in cold weather. I have traveled throughout Utah, Idaho, Montana, South Dakota, Wyoming, and Colorado. I am hoping to go travel Highway 1 up the West Coast soon.” 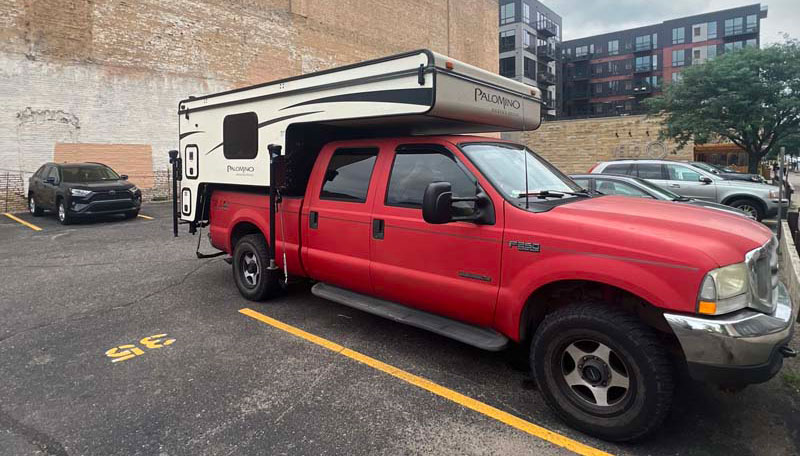 My summer road trip was from Texas to New Hampshire to Wisconsin, Montana, Calgary, Alberta to Washington, and back to Texas.” 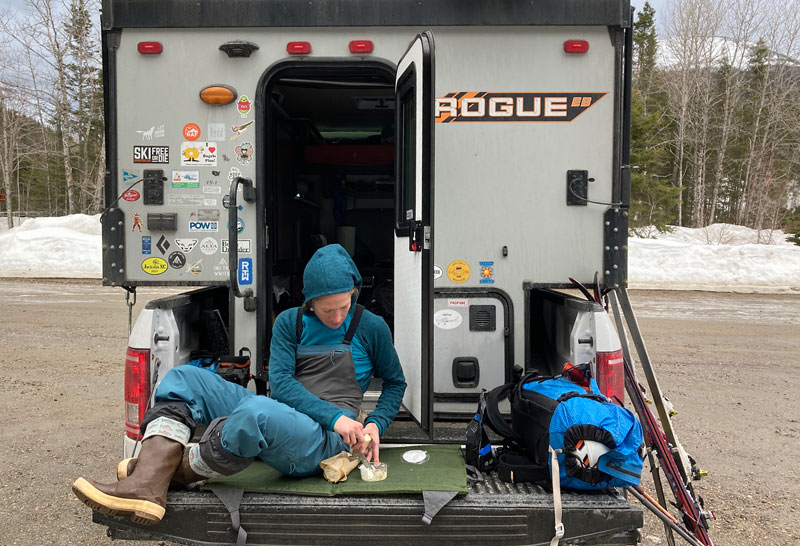 The total for my truck and camper was $35,000 with all improvements.

Affordability was the initial way I got into it. I purchased a cheap truck for $3,000 here in Maine to try out the truck camper option. I decided a new camper was actually a good bargain compared to the lack of options on the used market.

I also liked something that was backed by a warranty, which was good as we have had some issues. Also, compared to the cost of outfitting a van, this was not bad and everything was mostly already done.

We decided we liked truck camping and purchased a newer truck that would pass inspection since the old one would not. In searching for a newer truck we chose the least sexy model possible, the two-wheel drive work truck with an extended bed. The original $3,000 truck was a similar model and we like it.

This choice also meant we weren’t competing against high school kids/young guns looking to hop it up or transport their families. This meant we got a relative deal compared to others in this hot market. It had 170,000 miles on it, but was from the south and had not a bit of rust on it. In Maine, trucks don’t get to their full potential lifespan because of rust.

We like it; crank windows, no cruise control, but a durable interior and a V8. We don’t use it for day-to-day use so we could get something that doesn’t have four doors and that many creature comforts. Some people think two-wheel drive in Maine is a non-starter, but we put snow tires on it and have been impressed with how good it is in snowstorms. With all that weight over the drive wheels, it gets fine traction.

We do not off-road with it. The most we tackle are dirt roads, which the truck does fine with. We also like the two-wheel drive as it has the highest payload at 2,300-pounds, which s well over our camper of 1,400 pounds, plus us, plus gear. The eight-foot bed gives us a porch with our shorter camper and allows us to close the tailgate and store things down the side. 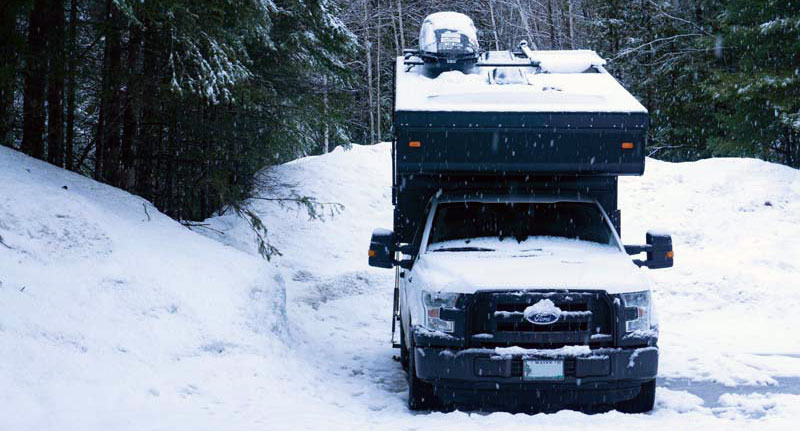 I’ve worked out of it a bunch, but we also use it for ski trips and vacations. During Covid, it was a great way to visit friends. Now it doesn’t get used as much during peak summer but in the fall and winter, it will see an uptick in trips. We have left it home and chosen a tent once or twice due to high gas prices.

For trips that have been a lot of driving, our car gets 35-plus miles-per-gallon versus our truck at 11 miles-per-gallon. We like having a truck for the few times a year we need it, and really like the ability to swap out the truck. The pictures are from a ski trip to the Gaspé in Canada.

Do I lust after a Cirrus and a 2500HD? Sure, but this truck and camper combo lets us do almost everything with a few added benefits. The Thule rack on top is great and we do like the back porch.” 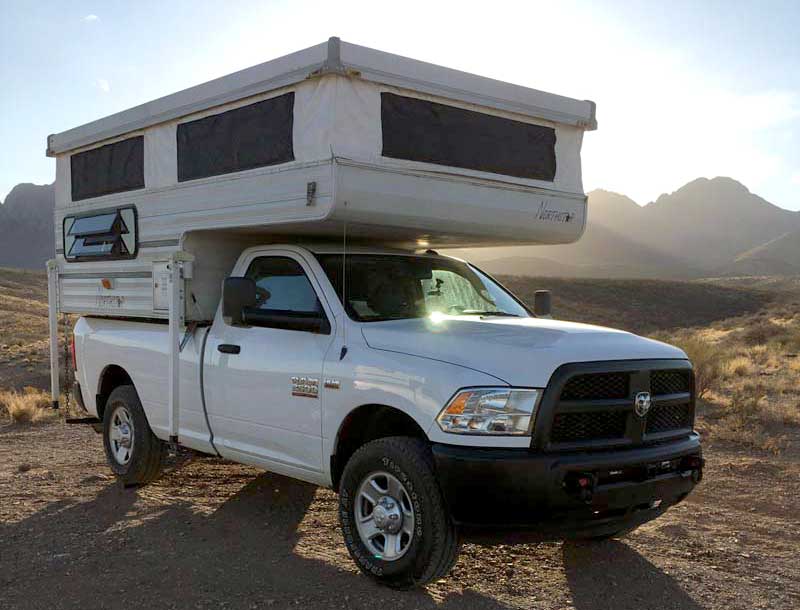 Cost and options were important. My truck is a long bed 4×4 with 5,000-miles. The camper is a light 8-foot model with a shower. 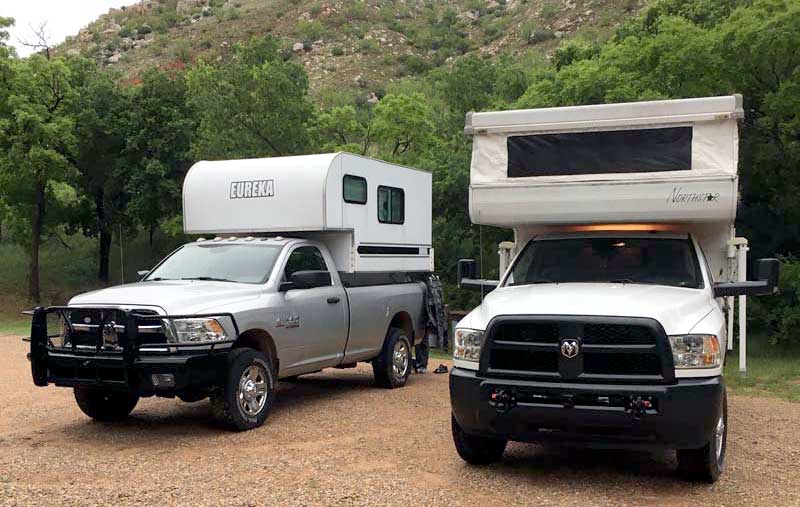 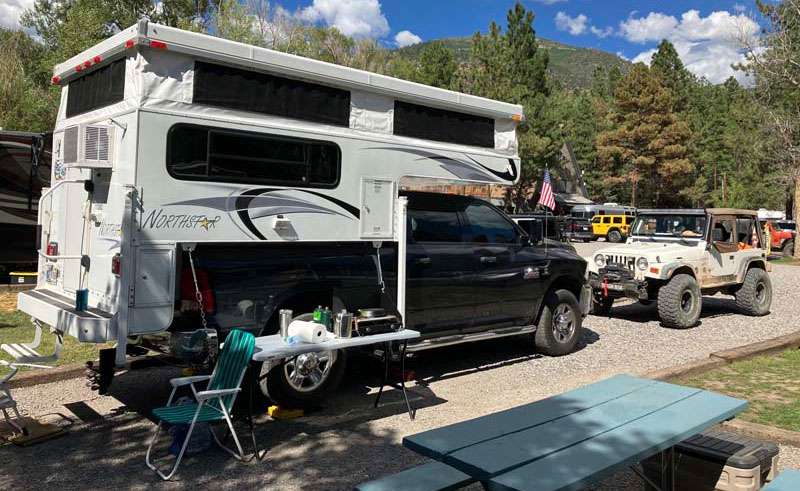 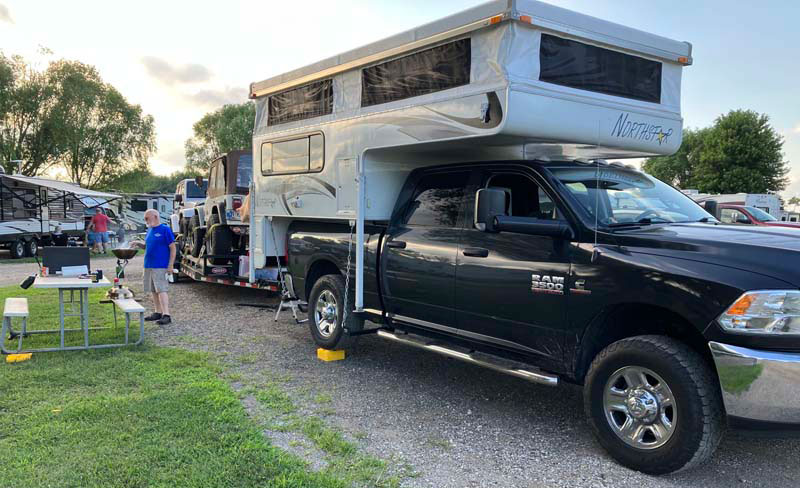 Affordability was important, but the biggest driver was load and tow capacity.

I just completed a two-week Jeeping trip to Moab, Utah, and Ouray, Colorado with my 18-year-old son and 78-year-old father.” 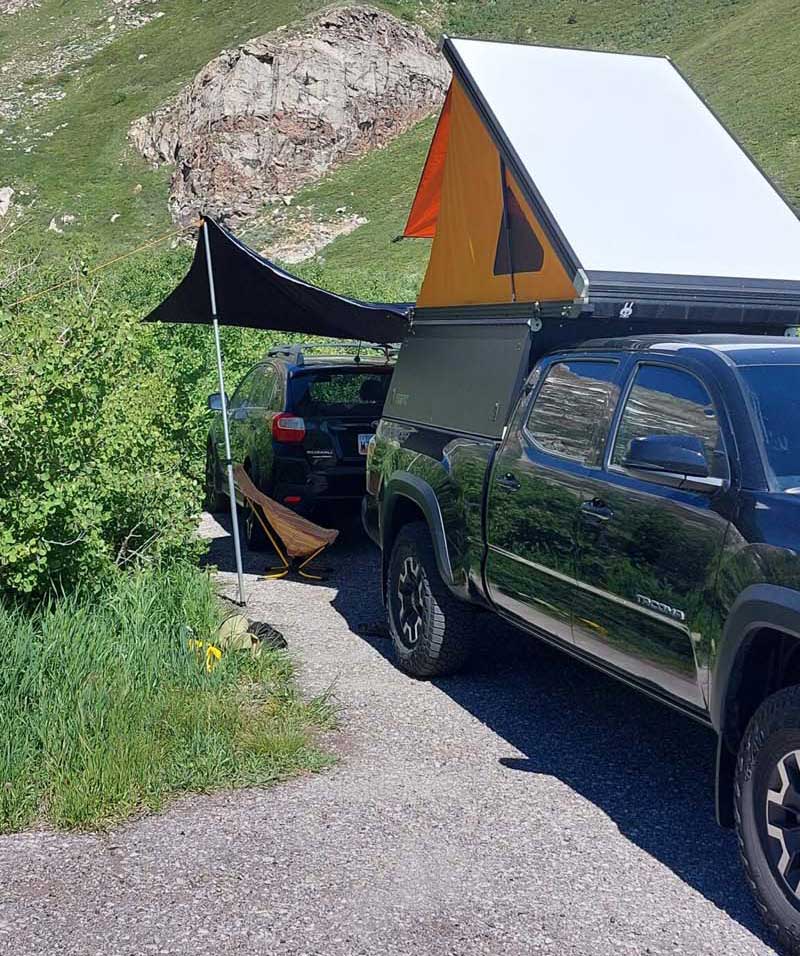 I wanted this combination so that I don’t have to tow a bunch of crap around. I go camping, mountain biking, pack rafting and backcountry ski touring.” 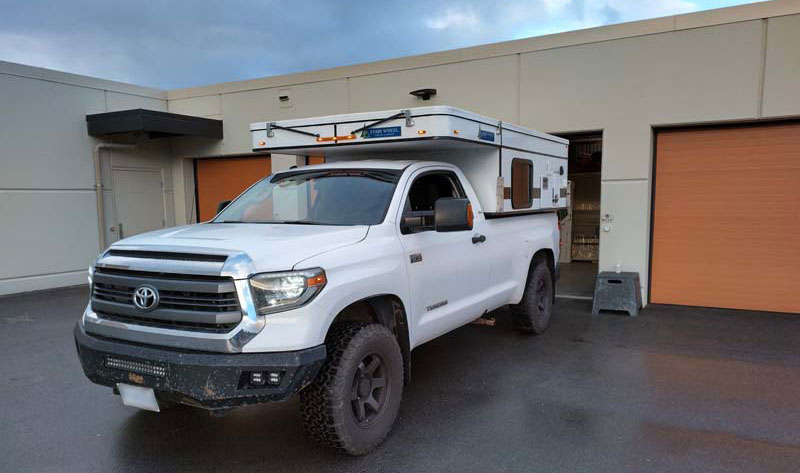 It is a bit confusing because it was a mix of currencies, and it’s slightly old and slightly expensive, but it’s my type of rig. I wanted a regular cab half-ton with high payload and a new and simple pop-up camper. To go even lighter and less expensive, the Four Wheel Camper shell or Project M is available.

I have toured the southwest US going to lots of state and provincial parks. My camper is a base camp for hiking and mountain biking.” 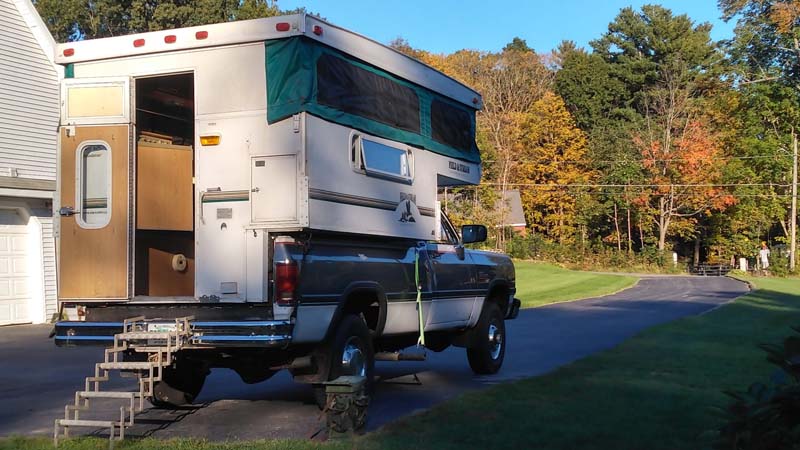 Yes, affordability was important. I spent a few hundred dollars fixing up the camper. I use my camper for hunting and fishing.” 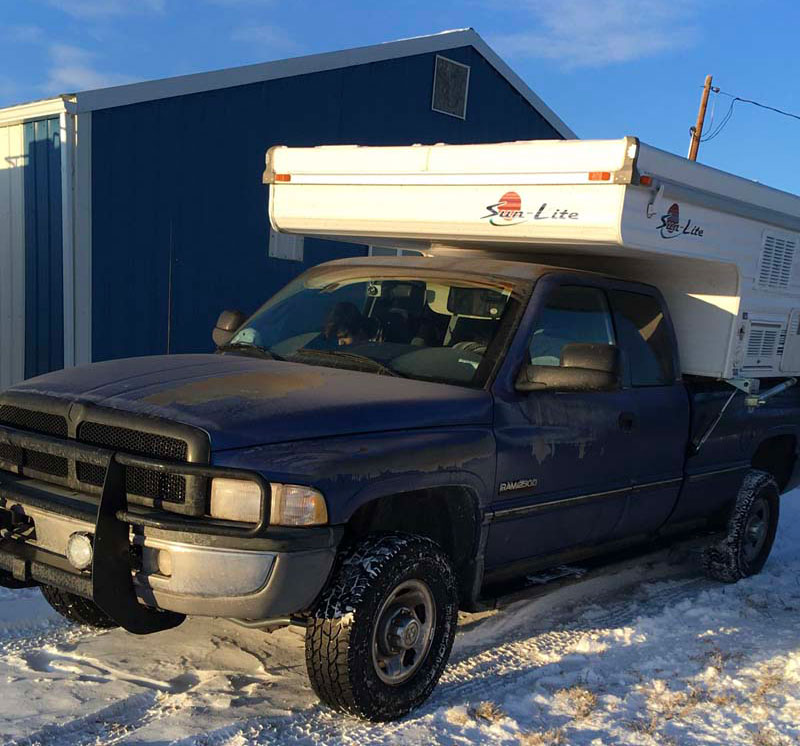 I had been looking for two-years for an affordable camper for the truck. Even the used top stuff is expensive. Mine was well taken care of by the previous two owners.

I use my truck and camper within the state for fishing, hunting, and exploring while camping in it. I’m happy with my choice most days.” 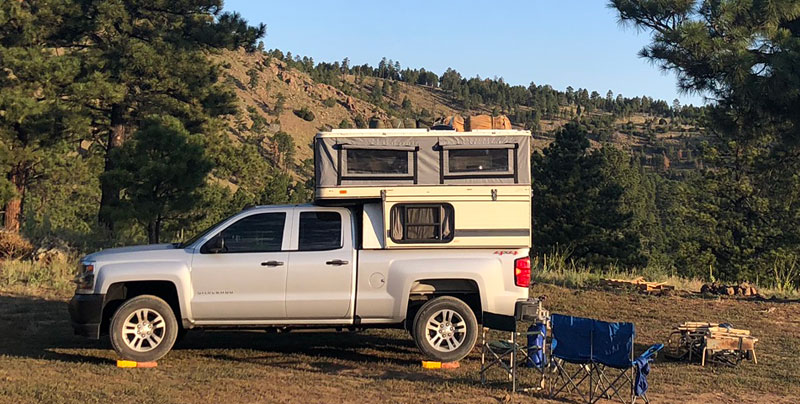 I bought a used 1995 Four Wheel Camper Blazer model, which is rare. It cost $6,000 US including the old diesel Blazer from Craigslist in June of 2016.

Absolutely, affordability was important. I pulled the camper off an old noisy diesel Blazer and put it on my newer truck. The Blazer Four Wheel Camper is like a shell with a pop-top. With a queen bed, removable table and chairs, stove, solar and Engel fridge, hidden sink with foot-pumped water, Propex heater, and porta-potti, we go for months with reasonable comfort.

With four-wheel drive and a super lightweight camper, we go almost anywhere. We are river rafters so we have been to every state in the west, rafting our beautiful rivers. We’ve also traveled to Baja a bunch.

We sometimes think we want to upgrade, but the pluses of our current rig are greater than the pluses of a new fancy camper when you factor in the cost, weight, and hassle of switching.” 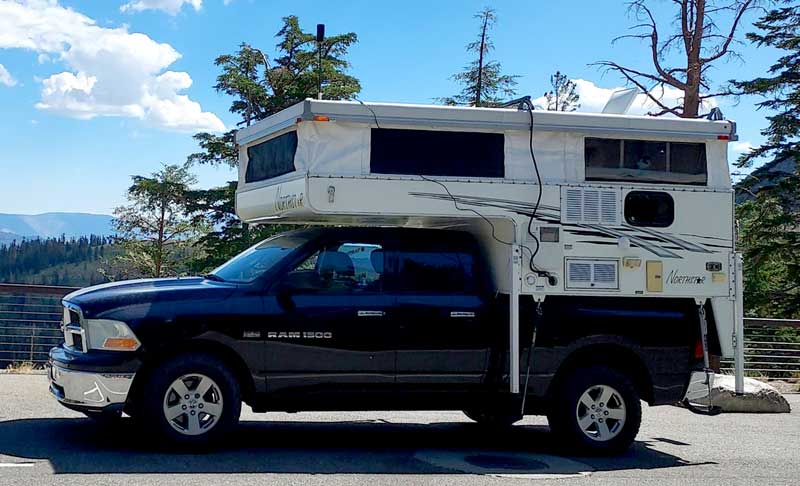 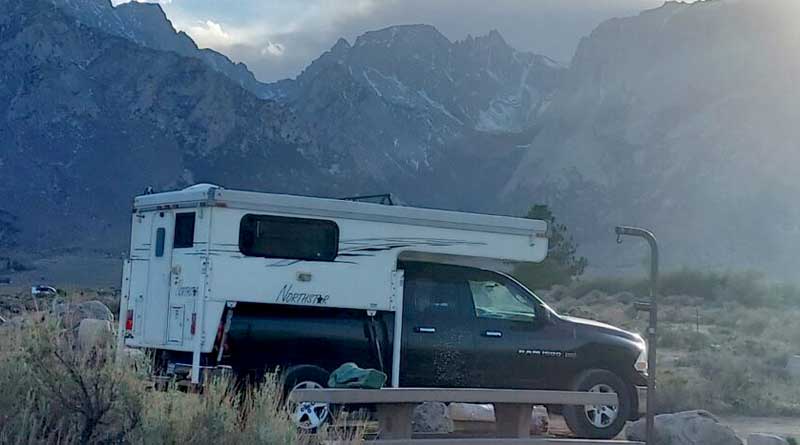 Yes, I was on a budget and this was my first rig. I wanted to make sure it was right for me. I have absolutely no regrets.

Tent camping was getting a bit rough and cold for the girlfriend, so it was time to try the truck camper life. We have camped in the mountains, desert, beach, lakes, driveways, and parking lots. Boondocking is the favorite.”

We are still happy with it and we still use our rig!”