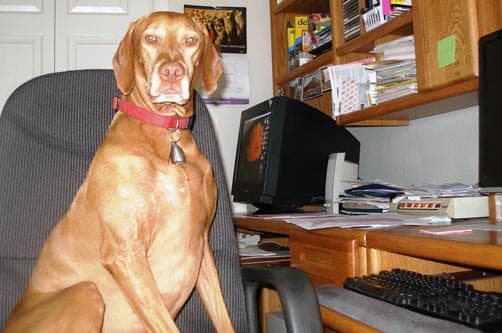 It’s not that often that we have a dog write in and tell us about his truck camping adventures.  Razi, the Rescue dog tells us about his encounter with Sammy while camping in eastern Oregon.

On November 4, the humans and I took our annual horseless last, overnight camp of the season to Succor Creek Campground in Eastern Oregon. 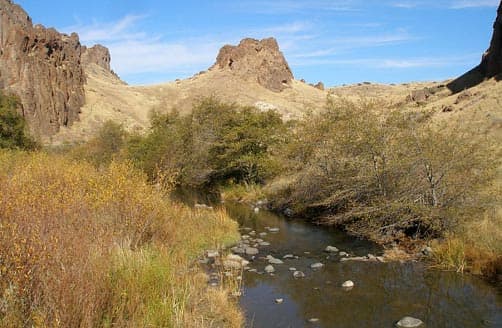 This is the one campout of the year when Phil pays attention to Margaret and me because he doesn’t need to ride and take care of Timer our horse. 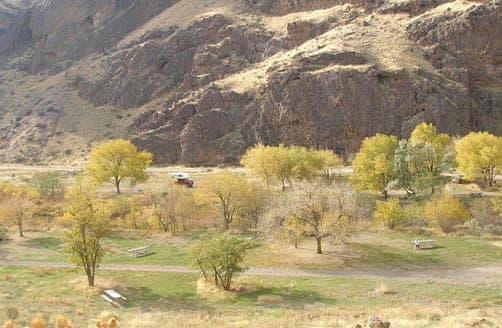 Succor Creek Campground came after fourteen miles of gravel roads past beautiful high desert scenery where the only signs of life were a few birds and perhaps a dozen cows.  After a couple of cattle guards there weren’t even any cows.  We passed canyons and rock formations and finally dropped down into a canyon with Succor Creek running through it and located a primitive campground; the perfect kind.

After picking a camping spot and setting up our little camper, Margaret said, “Look!” and pointed at a small black and white setter trotting purposefully towards our camp.  Phil called him and looked over his collar and found a Payson, Arizona license tag saying “Sammy, Payson AZ” with a couple of phone numbers.  He looked well cared for except for a sort of hungry, frightened, lonely look and some burrs in his ears and feathery tail.  I had Phil share some of my dog food with him and he ate it right down.  He bonded to us right away.  When we went into our little Six-Pac camper, Sammy found resting places next to the Chevy truck cab.  I didn’t finish my supper so Phil gave the rest to him and he ate it right down too.  He was a very polite little dog. 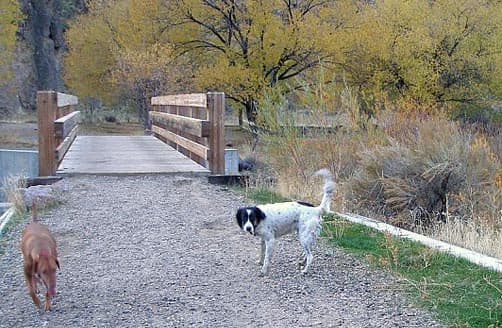 When we took our evening walk, Sammy came along.  While I searched for birds on one side of the trail, he went right to work on the other.  It wasn’t something new to him at all, but we were starting to be concerned.  I knew that we had the perfect number of dogs in our family, me!  We had seen maybe five vehicles since we’d pulled into this secluded camping spot and none of them looked like Arizonians looking for a spaniel.

Sammy was trying hard to not be lonely, cold and hungry again.  He’d moved his sleeping spot to just under the steps by the camper door.  Once when Phil got something out of the cab, he jumped in as if to say, “Please help me, please”.  My humans discussed what they should do.  Take him back to Idaho?  But that might mean we were taking him even further from his human.  Had his human gone back to Arizona without him?  Would his human pay to ship him home?  How would the Idaho Humane Society think about Arizona dogs imported from Oregon?  Our camper is too small for two humans and two dogs, even overnight, so we put a fluffy towel at what seemed to be his favorite sleeping place by our camper steps and he curled up in a little ball to keep warm.

We went into the camper and listened to music on Margaret’s lap top.  About nine o’clock, I told the humans I should go out for my last walk until morning and so we could check on our new friend.  Phil took his flashlight, which he often doesn’t do since we can find our way by starlight.  There was no moonlight that Friday.  He went on the walk with us and as we came back in the dark, a car came slowly up the gravel road past camp.  At the sign saying “Leaving Succor Creek State Park” the car pulled into the last driveway and reluctantly turned around.  We’d waved at both vehicles that had gone by since Sammy joined our group but they’d just waved back.  Phil flashed the light at the car and the driver stopped saying, “I’m sorry, I didn’t mean to scare you”.

Phil answered, “You wouldn’t be looking for a lost dog would you?”

Phil said, “A little black and white one?”

But by that time the large Arizonan was walking towards the camper saying, “Sammy, don’t be scared, it’s Michael”.  Sammy seemed just a little scared but he came up to Michael who was wrapping his arms around Sammy hugging him to his chest, crying with relief.  We Carrolls were relieved, too, as we had continued to explore what actions we should take to get Sammy home.

Phil and I walked to Michael’s truck with him and he told us, “We lost him seventeen miles from here. I’ve been looking for Sammy for three days and nights.  He lost us after we saw a huge flock of chuckers.  Someone told me that a dog had tried to follow his car near the cattle guard up there (likely about a mile from camp) so I was looking here”.

He continued to cry and tell Sammy how happy he was to have found him.  He told us his older parents were looking in the dark too.

The rest of the trip was just beautiful scenery with a few trees with fall colors and neat rock formations. We need to bring Timer back here, perhaps on the Idaho side of the border because Phil thinks the scenery rivals Hard Trigger Canyon, one of the most striking trails in Southwestern Idaho. 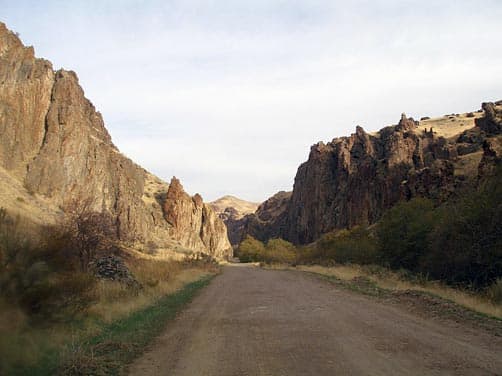