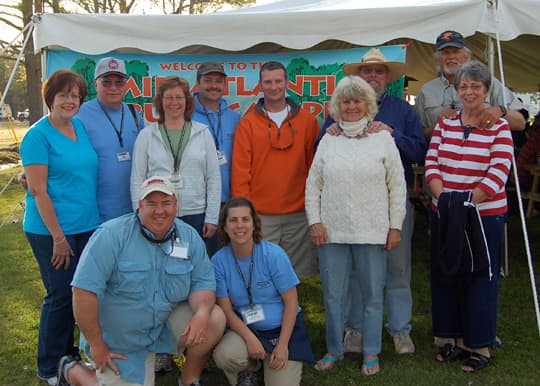 Above: Interviewees of TCM at the Mid-Atlantic Truck Camper Rally

We would love to do all of our interviews in person, but it’s just not practical with stories being gathered from all over the United States, Canada, and the World.  For this reason, the majority of interviews we conduct for TCM articles are done over the phone.

Even though the majority of our interviews are long-distance, we have been very fortunate to meet a great number of the folks we have interviewed over the years.  On a few occasions we have recognized someone’s rig in a parking lot or campground.  Other times interviewees have come out to RV shows or rallies.  However it happens, it’s always a kick to meet our interviewees in person.

While none of the interviewees have had a mob of teenage girls chase them around a national park, or had to disguise themselves to go shopping, quite a few have reported being spotted by Truck Camper Magazine readers.  They tell us they felt like celebrities as fellow truck campers said, “Hey, you were in Truck Camper Magazine!”

Interviewees We’ve Met During Our Travels

Above: The Berniers, Anne and Joe Brown, Reta and Jerry Caldwell

Above: Gary and Pam Veeder, John and Marylou Wells, Dave and Lynn Rogers