What a busy year so far for the North-East truck camper group.  From a Lobstah Bash to Tall Ships and Pirates to a Hot Air Balloon Festival, what’s next?  It must be the prospect of snow that keeps all those campers rolling in.

The annual South County Hot Air Balloon Festival was held on the athletic fields of the University of Rhode Island in West Kingston, Rhode Island July 20th until July 22nd.  Twenty-five truck campers gathered on what was less than level ground.

This section of the fields had been used for a mud bowl truck pull and the divots, holes and hillocks left behind when it dried were a bit disconcerting.  No ankles were twisted or broken, but a great deal of staggering was done.

During last year’s balloon festival the temperature hit 104 degrees Fahrenheit.  This year, after light rain on Friday morning, all enjoyed a seventy degree weekend with sunshine. 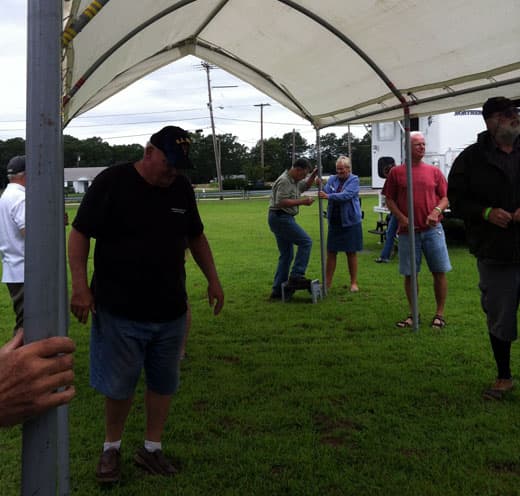 The four new to the group campers were treated to the sight of a very well coordinated tent lifting, akin to an Amish barn raising.  By noon, a long line of pop-ups had been added on and appetizers and adult beverages were enjoyed out of the rain.

It’s amazing how many pop-up tents, tables, and chairs can come out of truck campers.

Mike Tassinari surprised the group with an old fashioned ice cream social.  He brought nine gallons of ice cream, bananas for splits, fruit, sprinkles, whipped cream, bowls, and spoons.  John Cafferty and the Beaver Brown Band played while the balloons were lit, glowing in the night. 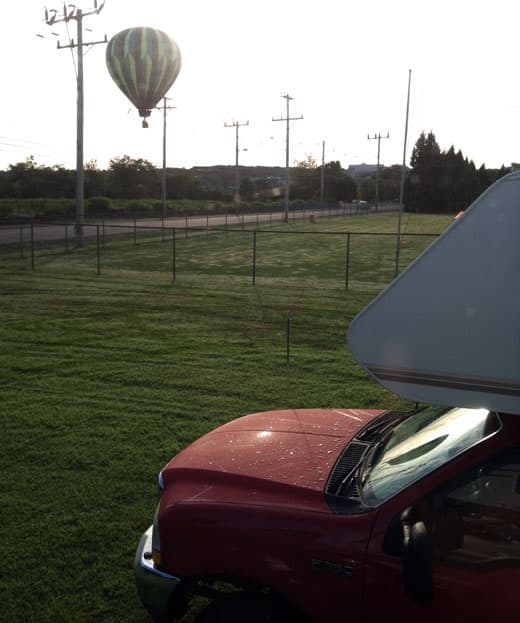 On Saturday morning many campers were awakened by a WOOOSSSHHHH; the sound hot air balloon gas burners make as they take off. 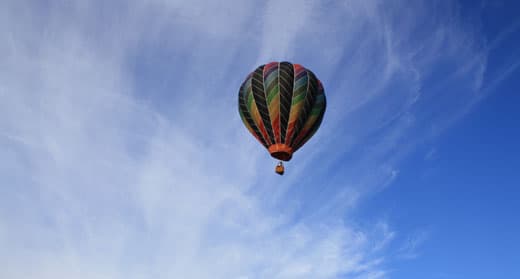 The balloons were right over the campers at low altitude as they climbed off.

This year there was a large craft show, a wild animal show, and kid’s rides by the balloon moorings.  The Kansas City Barbecue Society held a cook-off with barbecue pork, chicken, and beef.  These folks travel around the country from event to event and compete.  Most sold the results as very tasty meals.

The Cannon Lady had her cannon mounted on a Ford F450 with low body utility compartments.  She caused a bit of envy for a lot in the group.  There was also an exhibit of model airplanes; not the kind built out of balsa wood, but seriously large, powered planes.  They were flying out of a field beside the campers and the aerobatics were fun to watch.  Many of the truck campers went to see the Revolutionary War Encampment and returned grateful for the luxury of a truck camper.

Our truck campers looked pretty cool lined up in two rows with the tents in between.  We got a lot of visits from nearby campers in huge Class A motorhomes who wanted to see our small rigs compared to theirs.  Lots of campers were shown and cards for dealers passed out. 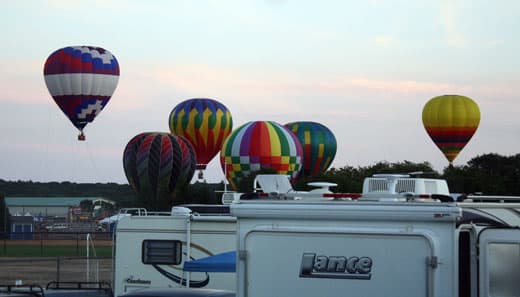 Mike Olesnevich from Xtreme Campers attended as a camper and finally got to eat some of the Sunday morning breakfast he sponsors.  Every time someone walked by his camper, he was sitting on his back porch eating lobster! 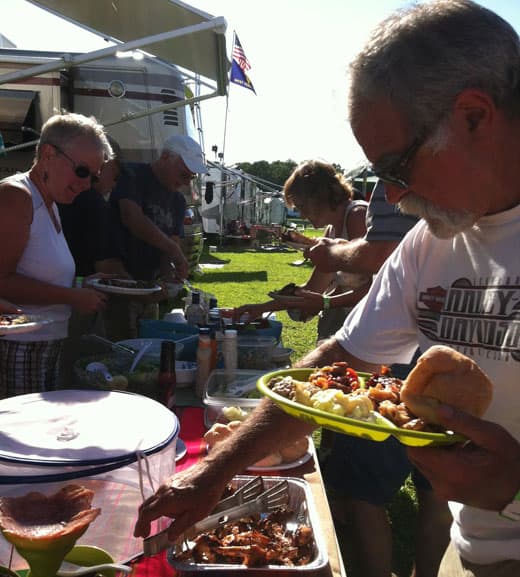 A late afternoon potluck was enjoyed, leaving time for the traditional raffle before the balloon glow and fireworks. 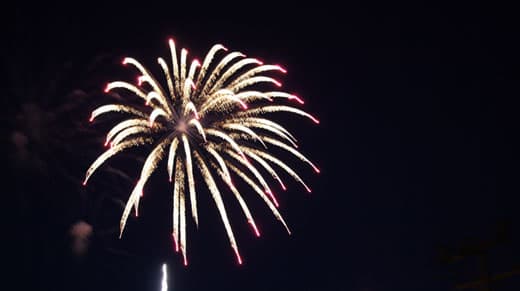 Mike Tassinari always has the new folks to the group introduce themselves and share how they got into truck camping.  The group also shared lots of tips and tricks on where to camp, how to camp, and best handle the rigs.

On Sunday the tents were down, tables were folded, and we all lurched over the broken field headed back home and other adventures.

Thanks again goes to Anne Brown for her report and photographs.  For more information on future NE Jamborees, visit their website at www.truckcamping.net.