This week’s Question of the Week was, “Have you taken your truck camper off-road, or do you stay on the pavement?”

“Well, we started going off-road forty-three years ago on our surfcasting quest on coastal Rhode Island.  Thirty-four years ago, we changed our camping activities to a truck camper and of course that meant camping on the beach.  It’s the greatest to have ocean front living even if it’s just three or four days a week; Spring, Summer, and Fall.  There’s nothing like the sand between your toes, or in your treads.  Your articles have been great and very informative to those heading out on the sand for the first time.  Keep the great stories coming.  And TCBS (Truck Camping Beach Syndrome) is real!  It’s the greatest!” – Bob and Julie Long, Rhode Island

“My truck camper stays on the pavement.  What I’m towing goes off the road; my Jeep, quads, boat, etc.” – Bruce Moses 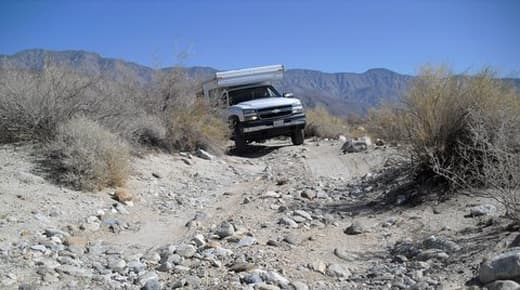 “Hi Angela.  Here is a photo of our truck camper taken a couple of weeks ago in Rockhouse Canyon located in Anza Borrego Desert State Park.  We travel and camp off-pavement all the time in California’s Mojave Desert, Death Valley, and Anza Borrego.  We live about forty-five minutes from Anza Borrego Desert State Park and can do an overnighter there for a quick desert fix.  We’ve also camped in remote areas of the Kofa National Wildlife Refuge, traveled the whole length of El Camino Del Diablo in the Cabeza Prieta National Wildlife Refuge in the Arizona deserts.  We’ve also gone to Utah, Nevada, and New Mexico on back roads and trails.  And that’s all been in a pop-up truck camper.  Our only confession is that we have never stealth-camped in a parking lot – ever.” – Cliff and Susie Kellogg, California

“Hi Angela and Gordon.  My wife Laura and I take our camper out at least two weekends a month, maybe more.  I would guess that about half of that time we end up off-road somewhere; either in the Redwoods of Northern California, or trying to access some of our favorite fly fishing waters on either slope of the Sierras.  We’ve never had any major issues.  I do have to confess that one one of our first trips off the pavement we found ourselves heading down a road that had our Lance 1055 leaning a little too far to one side.  We were a little nervous knowing we had to drive back out the next day.  We took it easy though and have become very comfortable over the years taking our set up off-road.  We also spend a lot of time in the snow with our Lance, and nothing is better for traction then 4,000 pounds of camper in the bed of a F-350.  We are unstoppable!” – Kevin and Laura Eliseo, Northern California 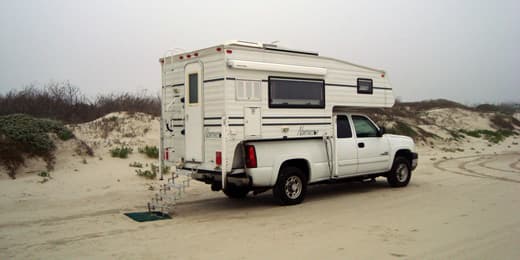 “I have indeed taken my truck camper off-road staying on the beach of San Padre Island.  I loved it.  I was with another couple who owned a 4×4 with a Northern Lite truck camper.  Good thing they were with me as I got stuck in the very loose sand (greenhorn not knowing to deflate my tires!) and they were able to pull me out.  Thank God!  We later found a beach where the sand was rock hard and spent three days on the beach.  I would do it again.” – Karen LaPointe

“Off pavement, yes.  We go to motorcycle rallies, living history events, and cannon matches on mostly grass and well-maintained dirt roads.  We’ve never been on a beach, or tackled Jeep trails through a forest!  Marylou wiped a solar panel off the roof on our old Lance 835 with a low hanging branch at a motorcycle rally once.  That’s gotta count for something!” – John Wells, Pennsylvania

“I get as far back on the two track as legally allowed on the U.S. Forest Service and BLM Land.  That’s what’s great about a truck camper!” – Dennis Thorell

“Hi you two.  Does the dirt road that leads to our cottage counts as off-road?  We live in a city townhouse and therefore cannot park the camper in our driveway.  So every time we go out on a trip, we drive down to our cottage in the country to get the camper.  We are lucky enough to have a paved road up to our property and have only a couple of hundred of feet of dirt lane way.  Truck camping is relatively new for us, so our few adventures have been on paved road so far.  But we enjoy what I call “semi-boondocking” rather than camping.  We stay overnight in public building parking lots like city halls, firemen stations, municipal skating rink parking lots, or the occasional Wal-Mart.  Of course, we always ask permission to do so when we arrive at these places.  We do plan to do an off-road expedition once we retire in four years.  We’ll travel around the country to escape our Canadian winters.  I always enjoy reading the off-road adventures of other fellow truck campers that you publish.” – Denise Hupé

“Angela, is this a trick question?  Did you say road or pavement?  The Denali Highway (Alaska Highway 8) is 134 miles of gravel road and we did get twenty yards off the road to camp one night.  You be the Judge.” – Matt Reinker

“Pavement is for the peasant.  I prefer a truck camping pedestal (if you don’t mind) and make it a five-star, thank you very much.” – Joei Carlton

“Going out west for the last four years we have had a few experiences off-road.  I bought a book of easy 4×4 trails in Arizona.  Lila made me give the book away when we got back from a trail that got smaller and smaller.  We lost some hubcaps down the cliff as we hit the sides of the trail.  The jeep that came up behind us was in awe of my great driving techniques… he-he-he.  In Quartzite, we got on a wash that got so bad we lost one of the Torklift tie-downs and bent all the others.  I should have known that when Lila said, “I think the camper is coming off”.  No big deal. Everything works fine and a few screws had to be replaced.  With my off-roading, I really need stronger latches on the doors and draws inside.” – Dave and Lila 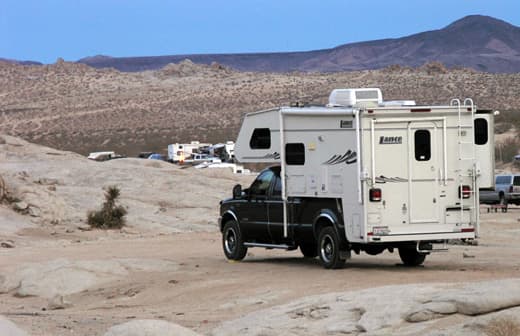 “Camping off road with E Clampus Vitus (ECV) for the past ten years has produced a lot of memories.  What is ECV you say?  ECV is a men’s fraternal organization dedicated to the preservation of history.  Let that brief description suffice.  My Chapter #1069, is named the “Billy Holcomb” Chapter with roughly 400+ members and numerous plaques all over Southern California.  “Clampouts” or campouts usually involve three to six hundred members in attendance, as other chapter are invited.  There are no small groups for us.  The Clampers are quite a bounce of jokesters and love playing pranks on each other.  I should mention this is a exclusively a men’s organization.  The rest of the family stays at home while the men go off for a weekend.  To balance this out, ECV has several family events also each year.  On a Clampout trip I have seen every kind of RV from a sleeping under the stars to Clampers with airplanes.  A dedication to history and fun are the buzz words for the weekend.  My rig is the Lance Camper on the gray Ford F-350 in these pictures.  I also off-road camp exploring the southwest desert looking for ghost towns and mining camps with a small group.  I could talk at great lengths on camping off-road but I think you get the picture.” – Jerry

“In our first year of owning a Northstar 850SC, we have not done any off-roading.  The availability of off-roading in East Tennessee seems to be slim to none.   I would like to try getting on a East Coast beach this year.  I would appreciate anyone who is willing to share any off-road boondocking locations here in the east.” – Dan 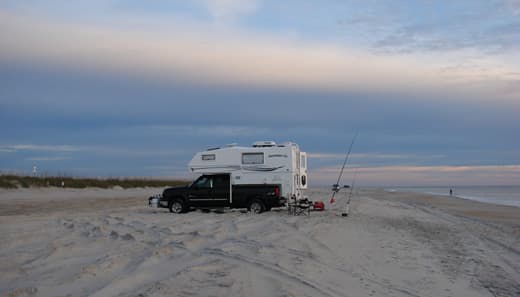 “My wife Susan and I love to camp on the beaches of North Carolina.  The closest is Freeman Park at Carolina Beach.  When we have more time available, we head to the Outer Banks of Hatteras and Ocracoke.  I attached a picture or two, one from Summer and one from late Fall.  Thanks for a great e-magazine.” – Walt Bowen

“About 20% of my travels require four-wheel drive, not the rock climbing type, but the single track two ruts to follow type of driving in mud and snow.  So far, the truck and camper haven’t let me down.” – Bruce Neumann

“Living and working in the mountains of Western Maine by 4×4, truck camper, or tent, I’ve learned off-road is the best way to go, and for free.  We’re surrounded by forests, lakes, logging roads, and shared use (paper company lands) as well as nature preserves.  They are open to the public for free, or for the cost of going on the paper company maintained roads (the Golden Road).  If it weren’t for off-road camping, I never would have discovered my recently purchased logging camp left over from 100+ years of logging.  I think I’ve paid twice to camp in National or State forests.  I really much prefer no fellow campers, just the call of the loon or howling of the coyote.  Self-contained and four wheel drive are the only way to go.  Nothing can compare to waking up beside a 16,000 acre lake with your nearest fellow camper maybe 100 miles away, and your only neighbor a Maine Moose, or a loon calling for their mate across the water.  Besides, after a Winter spent in Maine, frost heaves and mud season can turn those real paved roads into a real off-roading experiences.  I discovered that my first year after buying the Lance when our 225″ snowfall turned most of our Maine roads into four low rides.  Get thee off-road Pilgrim.” – JC

“Angela – I don’t take my camper off the pavement often, but have done so as necessary.  Once I drove over Kebler Pass west of Crested Butte, Colorado at night in the rain.  Kebler is a dirt road and is closed in the winter.  It wasn’t bad, but with several deer and cattle on the road, it sure was a mud cake after!  I would like to go on a beach but I don’t have the nerve yet.  I don’t want the dual rear wheels to rub together.  I have a Ford F-350 dually with a Adventurer 106DBS and SumoSprings from SuperSprings.” – Chip Collin