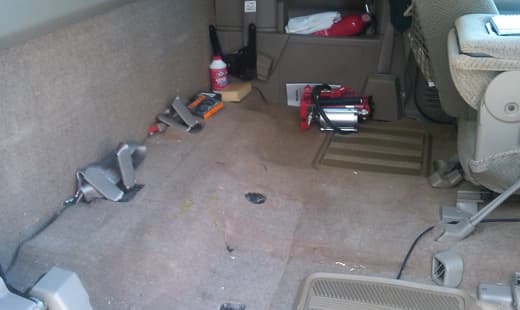 First, I took the back seat out of the truck and built what I call a basement.  After three attempts, I then had it at a height that allows me to store a lot of stuff.  Everything from an air compression jacket, battery cables, tire puncture repair kit, turnbuckle, tire wrench, air compressor hose, brake fluid, spare parts (hoses /belts), windshield washer, backpacks, hiking poles, monopod, electrical tie down straps, duct tape, antifreeze are in this back seat space. 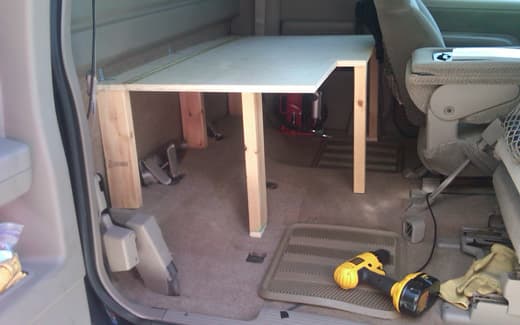 In the above picture the basement is installed.  The top shelf of the basement will be used to hold duffle bags for clothes.  The notch at the front of the plywood, three-quarters inch birch on two sides, is to allow the passenger seat to be reclined, if necessary.  The unit is strong enough to support all of my weight, which I’m not revealing at this time, to allow access to the far side behind driver.  On the back window of the cab I use the large plastic suction cups to allow us to hang our coats, hats, and some smaller items.

Every time I put something under the basement, I took a picture.  The picture was then mapped to a description of the item; how many, quantity, how many fluids, etc.  I wanted to ensure that I had the items, had a list of what items I had, and where I would be able to find the items.

All of the items in the basement are items that will get limited use.  Items that will be used more frequently are closer to the front of the third door and more easily retrieved. 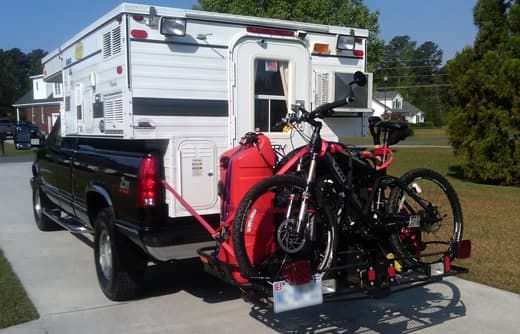 I have a fourteen gallon gas tank with a ten foot hose that never has to come off the cargo carrier.  Also in this space is a Honda EU1000i generator that will provide power when boondocking.  There is an extension cord tied down by electrical ties that runs from the generator, down the side of the truck bed, and into the camper.  There are three plugs coming off the cord to power my computer and charge my other technologies.  The excess cord is tied off to the back turnbuckle so it can’t slip out.

There is a full sized second spare tire.  The other spare tire runs under the truck.  There is a Trek Fuel EX Mountain Bike or an Emergency Evacuation Vehicle.  The cargo carrier is actual two carriers welded together.  The second carrier was cut in half prior to being welded to the first cargo carrier.

For safety there are fog lamps for backup lights and an extra set of brake and running lights off the back of cargo carrier.  Each individual item on the cargo carrier is locked.  In addition I have one long lock cable that goes through each item on the carrier, making it doubly secure. 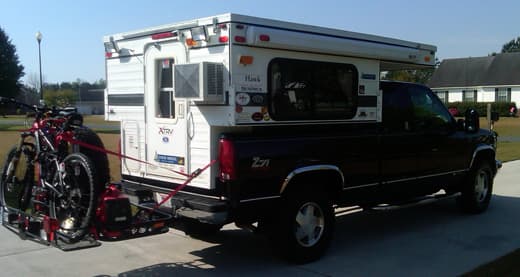 I divided the truck bed into four quadrants; passenger, driver, front, and back.  With access doors from the inside of the camper, I placed items in the four quadrants.  This allows me to store items that will not be used often or at all; depending on the item.  Each item is inventoried as to what location it’s in so that it will be easy to access, if necessary.

If anyone is wondering, the Four Wheel Camper Hawk model does not require outside the bed turnbuckles, which is why none are visible.  That makes the rig very streamlined.  Because I am going over the Edgerton, Denali, Haul Road, Denali Park Road, Top of the World Highway, and Dempster, which are dirt highways, we have bolted the Hawk to the bed of the truck and used turnbuckles at each quadrant.  It’s sort of like a belt and suspenders.  I will check the turnbuckles daily and possibly more often when on the dirt roads, depending on conditions. 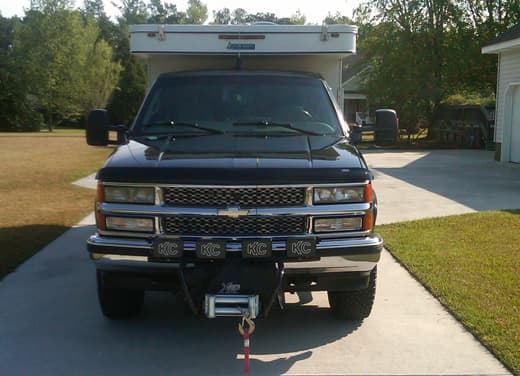 The truck has an 8,500 pound winch on the front and, with the turnbuckle I have, it should be able to handle up to 17,000 pounds.  I have also added driving lights and fog lights to supplement the truck lights and in anticipation of possibly losing lights on the dirt roads.

Notice the grill has had some additional protection added to protect the radiator.  I will also be adding a front cover that will consist of chicken wire.  So for a rock to get through, it would have to be a smart one.  I also have Radiator Stop Leak, just in case.  Oh and we have spare upper and lower radiator hoses just in case that are all stored in the basement.  The truck also has a compressor bolted to the frame and train horns to scare away any big game that gets in the way. 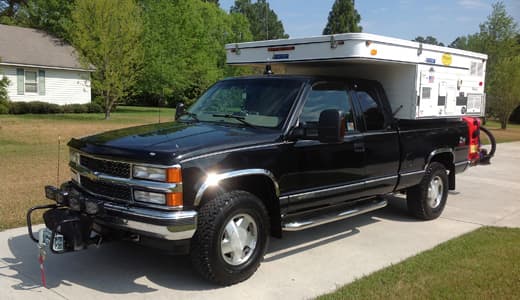 As you can see, there is nothing on the roof of the camper.  The beauty of the Four Wheel Camper Hawk is that it drops down to create a very efficient ride and saves me gas.  I have had it as high as fifteen miles per gallon, although not all of the time. 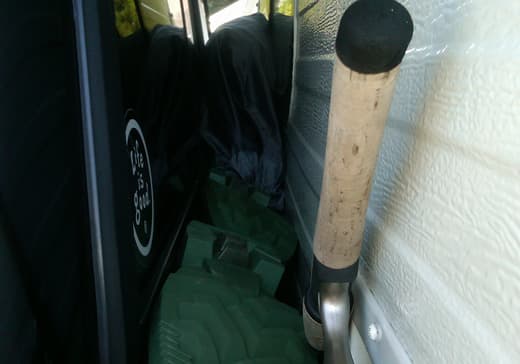 Between the cab of the truck and the camper itself is my flag pole, pole to roll out my awning, two fishing poles, a pair of rubber boots and a very small tent that I use for my outside shower.

The configuration of this truck camper can be off road for at least a week, if not more.  It only took two years to figure all of this out and two extended trips to test everything.  My Alaska trip starts in less than two weeks.