We hereby triple-dog dare the leadership teams of truck camper manufacturers, gear companies and dealerships to go truck camping.  This time everything about our industry challenge is bigger, and it starts right now!

If you believe the truck camper manufacturers, dealers, and gear companies need to use their own products more, please join us in signing the petition! 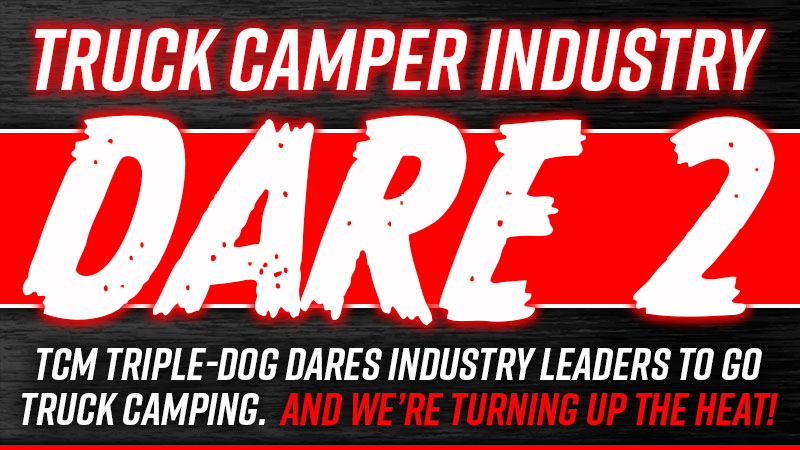 In 2019 we publicly dared the camper manufacturers to take their own campers out and objectively report their experiences.  We believed then, as we do now, that the more our industry leaders go truck camping in their own campers, the better those products will be.  We also believe that our industry needed a reminder of how fun truck camping can be.  After the past two years, who doesn’t want to have more fun?

Seven truck camper manufacturers accepted our 2019 dare, took out a truck camper their company produced and reported their experiences in Truck Camper Magazine.  The reports were wide-ranging, but the overall impact was significant.  Many industry leaders thanked us for the nudge to go truck camping and were full of ideas big and small to make their campers better.

We are throwing down the gauntlet once again and triple-dog daring our industry to go truck camping.  That’s right.  This is an official triple-dog dare!  And we’re turning up the heat.

For Dare 2 we are opening the challenge to not just the truck camper manufacturers, but the gear companies and dealerships as well.  If you work in the truck camper industry and have senior management, design, production, service, or sales responsibility, this dare opportunity is pointed at you.

We are also greatly expanding the amount of time industry leaders have to complete this dare; from four months in 2019, to seven months in 2022.  That’s 75-percent more time!  With these two changes, we want to see more participation and fewer excuses.  Forget, “I’m too busy,” or, “Oh I never saw that.”  No, you’re not.  And, yes you did!

How To Satisfy Dare 2

There are six rules every industry leader needs to follow to satisfy the dare.

1. Take out a standard production camper.

For the first dare, some industry leaders took out tricked-out versions of their products.  For Dare 2, we want to see the same products your customers can purchase.  No SEMA rigs or one-offs, please.  Gear companies and dealerships can take out any camper that’s available to them, as long as it’s a model available to the public.

To satisfy Dare 2, an industry leader must go out truck camping for two consecutive days and nights.  For example, go out on a Friday night and camp, camp Saturday day, camp Saturday night, camp Sunday morning and drive home that afternoon.  As long as the truck camping trip is at least two days and two nights, it counts.

3. Fully live in the truck camper.

To satisfy Dare 2, industry leaders should eat, sleep, poo, pee, shower, and generally 100-percent fully use the truck camper during the dare.  Pack clothes away.  Charge electronics.  Make breakfast, lunch, and dinner.  Fill and dump the tanks.  Use the camper for everything needed for two days and two nights.  Fully live in that camper.

To satisfy Dare 2, you need to go somewhere other than the factory, dealership, or your residential driveway or neighborhood.  Go somewhere appropriate for truck camping.  For maximum impact, we recommend BLM lands, National and State/Provincial Parks, or anywhere you can boondock off-grid.  That’s what truck camping is all about.

5. Take pictures of your experience.

To satisfy Dare 2, we need at least 12 photographs of your experience.  Show us where you went, what you did, and what you learned.  Your phone camera is fine and you can text the photos directly to us.  Show us your trip.

Finally, to satisfy Dare 2 you need to complete our Dare 2 form, answer the questions and submit a minimum of 12 photographs.  The questions are related to where you went, what you did, and what you learned about your product and the truck camping lifestyle.  When you accept the dare as an eligible manufacturer, gear company or dealership representative, we will email you the Dare 2 form directly.

Industry leaders have from today, April 12th through November 12th, 2022.  That’s seven full months to go truck camping for 2-days and 2-nights (or more).  All truck camping trips must be taken during this seven-month window to count.

Once again, we will publish the story of any industry leader who goes truck camping in Truck Camper Magazine.  This is an open opportunity to get your products in front of thousands of truck camper owners and potential customers.  All you have to do is go truck camping.

Readers, Join Us In Daring the Industry

If you believe the truck camper manufacturers, dealers, and gear companies need to use their own products more, please join us in our triple-dog daring by sharing your name and hometown below.

Scroll down past the signatures to sign our petition.