We are hereby double-dog, no triple-dog dare the management of truck camper manufacturers to go truck camping in their truck campers.  Please join us in our dare.  Hey industry, there’s a prize! 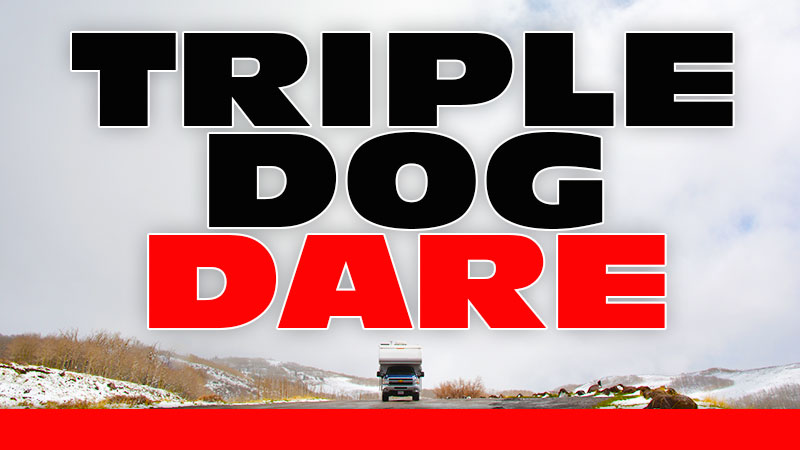 In response, we tell folks that some truck camper manufacturers actually do go truck camping.  Over the years we have published at least a dozen articles about industry leaders going truck camping in their own units.

In the late 1990s, I worked at a major advertising agency in Washington D.C.  Part of working on the advertising for any company or product was actually experiencing that company and their products.

For example, the DeWalt Tools team went to the DeWalt Headquarters in Baltimore for tool training.  The Volkswagen team went to Germany.  Even the McDonalds team was required to work at a McDonalds for a couple of weeks.

No matter who you were in the agency, you were required to roll up your sleeves and learn that company and its products.  Needless to say, the advertising and client service was much better as a direct result of this experience and understanding.

From the beginning, Angela and I employed this strategy for Truck Camper Magazine.  We have spent extensive time learning at all of the truck camper factories, worked dozens of RV shows, attended dozens of rallies, and spent thousands of hours truck camping in countless rigs, locations and conditions.

We live and breathe truck camping because we love it, and because it makes this magazine and everything we do better.

This is why we are triple-dog daring the management teams at every truck camper manufacturer to go on at least one two-day, two-night truck camping adventure in one of their own truck campers.

Not only will this challenge help the manufacturers to address some of the, “What were they thinking?” design issues many of us have experienced, but it will also help improve just about everything they’re doing.  I firmly believe it will help them to sell more truck campers.  They might not get that now, but they will.

Exactly What We’re Daring The Industry To Do

To satisfy this dare, industry leaders are to take out one of their own truck campers for a two day, two night truck camping adventure between July 9th (today) and November 9th, 2019.  That’s four full months of prime truck camping weather.

For example, industry leaders can go out on a Friday night and camp, camp Saturday day, camp Saturday night, camp Sunday morning and drive home that afternoon.  As long as it’s at least two days and two nights, it counts.

During their truck camping experience, industry leaders should eat, sleep, poo, pee, shower and generally 100-percent fully use their truck camper!  Pack clothes away.  Charge electronics.  Make breakfast, lunch and dinner.  Fill and dump the tanks.  Use the camper for everything needed for two-days and two-nights.

As for where they go truck camping, almost anywhere is game – but it can’t be at the factory or a residential driveway/neighborhood.  They must go somewhere appropriate for truck camping.

For maximum impact, we recommend BLM lands, National and State/Provincial Parks, or anywhere you can boondock off-grid.  That’s what truck camping is all about, and where industry leaders will learn the most about their product and the lifestyle it supports.

Required Proof and a Prize!

To prove industry leaders went on a truck camping adventure in their own products, we ask for at least 12-photos and a short write-up of their experience.

We also want to know where they went and what they did.  Most importantly, tell us what you learned about your product and the truck camping lifestyle.  We’re all ears!

Here’s the big prize: We will publish the story of any industry leader who goes truck camping in their own product in Truck Camper Magazine!

This is an open net opportunity to get your products in front of millions, no tens of thousands of truck camper owners and potential customers.  All you have to do is go truck camping!

Industry leaders have from today, July 9th through November 9th, 2019.  That’s four full months to go truck camping for 2 days and 2 nights.  All truck camping trips must be taken during this four month window to count.

Join Us In Daring the Industry

If you believe the truck camper manufacturers need to use their own products, please join us in our triple dog daring by sharing your name and home town below.

This effectively becomes a petition dare, a new invention that is sure to have the management teams packing for fun weekends of truck camping.

Scroll down under the signatures to sign our petition.