Truck Camper Magazine readers, Ken and Donna Pastorius, have been featured in a new GM video showing their tour of the GM Flint Assembly plant.

Ken and Donna watched as their 2015 GMC Sierra 3500HD Denali was built on the GM production line.  As you will see, Ken even got to participate in the build of his new truck.

Congratulations Ken and Donna on your new truck.  She’s a beauty and we can’t wait to see it matched with your Arctic Fox truck camper.

Here’s Ken Pastorius on the experience of watching his truck get built:

“Most families, as we did with our two girls, go to a hospital for the birth of their children.  On Tuesday, July 21st, we went someplace a little out of the ordinary to watch the birth of our new baby; the GM Flint Truck Assembly Plant, in Flint, Michigan.

Above: Cab, Rear, and Bed of the truck being built – click to enlarge

There we watched our 2015 GMC Sierra 3500HD Denali diesel come to life.  She had big hips and was a little heavy for a new born, but she was healthy, tough, and beautiful!  It was difficult to go home without her but, one week later, we brought her home to meet our Arctic Fox truck camper. 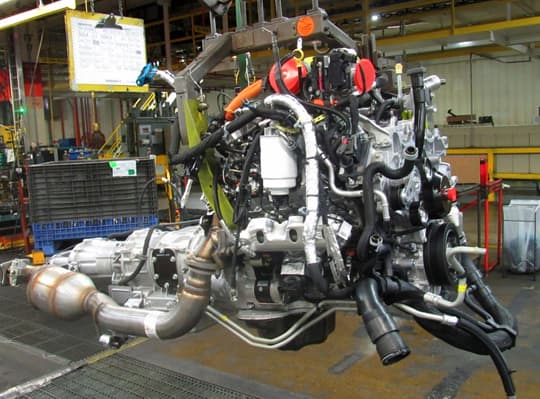 Above: The Duramax and Allison Transmission

Joking aside, the opportunity we were given to visit the GM Flint Truck Assembly Plant and watch our truck get built was a very unique and a once in a lifetime experience.  Surprisingly, it was all made possible after I posted a question on the truck camping forum on RV.net.  I asked about the compatibility of our Arctic Fox 1150 truck camper and the new 2015 GMC 3500 Denali dually. 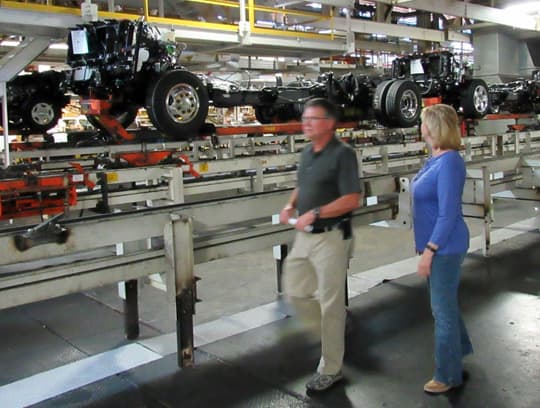 Above: Ken and Donna watching the frame of their 2015 GMC 3500 Denali dually coming down the assembly line at the GM Flint Truck Assembly Plant

One of the responses came from a person named Pete.  Pete said, if I was planning on having the truck built, to personal message him with contact information and he could possibly arrange for us to tour the GM Flint Truck Assembly Plant and watch our truck get built.

The very next day I was contacted by two people from General Motors, one from production scheduling, and the other from GM Communications.  After multiple emails back and forth, I was asked if it would be okay to also have someone be there to take some videos. 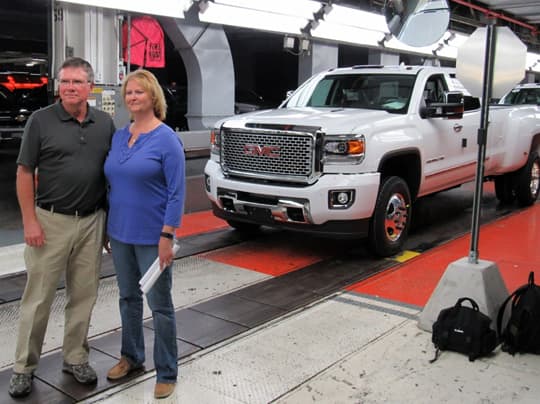 Above: Ken and Donna participating in the video

The “someone” taking videos, actually turned out to be a video crew who filmed us and our truck, the entire time as it was being assembled.  I was wired up with a wireless microphone and interviewed multiple times during the build.  As awkward as it sometimes felt to have a video camera starring at us during our four hours there, it actually turned out to be a lot of fun. 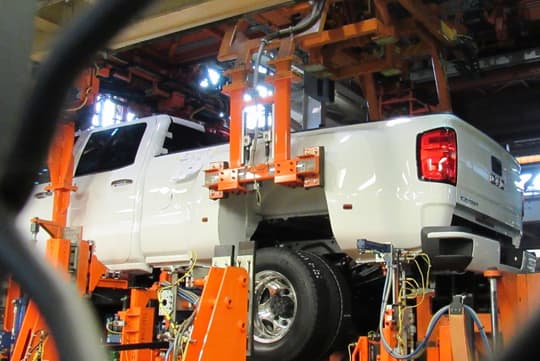 Above: Cab and box being dropped onto the frame 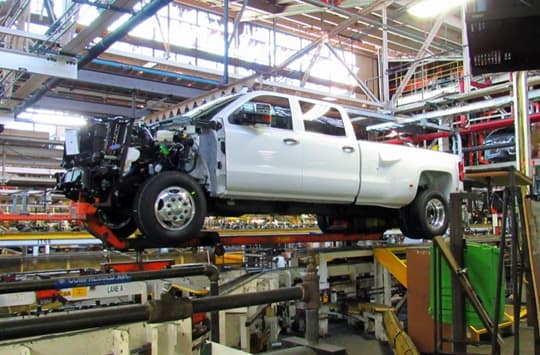 Above: Cab, box, and frame together 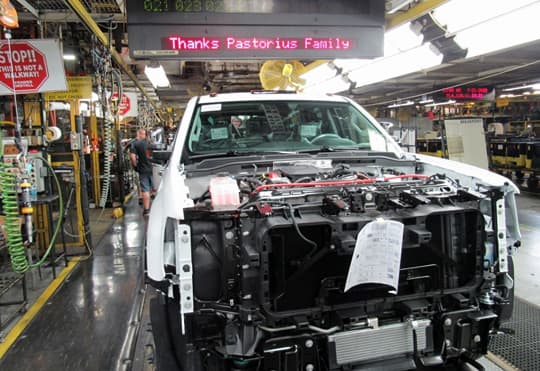 Above: Notice the sign above and behind their truck as it comes down the assembly line 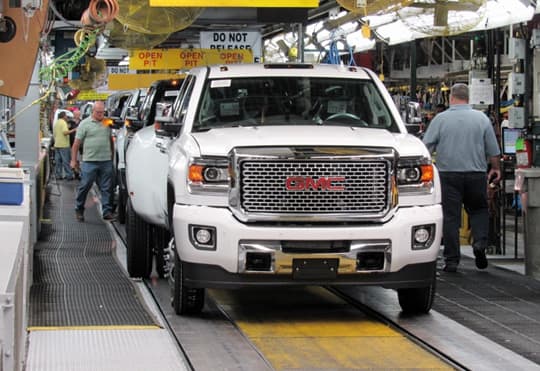 Above: Their truck is almost done!

What was most fascinating was the technology, and the quality of the people who work on the GM assembly line.  Over forty years ago, I worked on an assembly line at another truck manufacturing plant and the difference between then and now is like night and day. 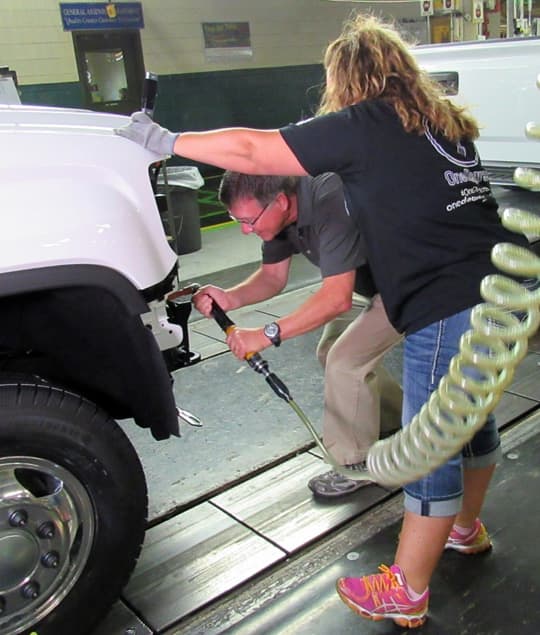 Above: Ken helping to build his GMC 3500 truck 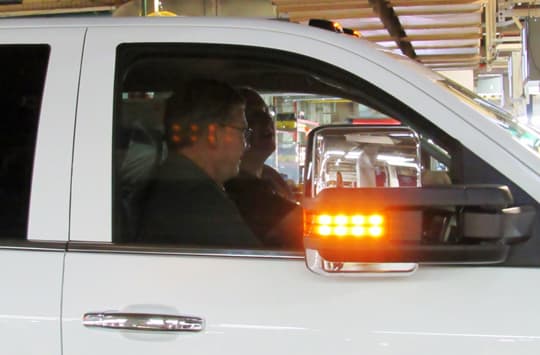 Above: Ken driving his truck for the first time

There is no more prying or banging on something to make it fit.  No more having to lift a heavy part into position.  It was more like a precision partnership between man, machine, and technology.  The professional assembly team beamed with pride in what they do, pride in their fellow team members, and pride for the company they work for. 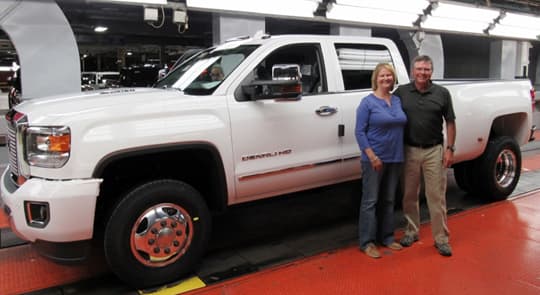 Above: Donna and Ken pose with their new truck after it’s built 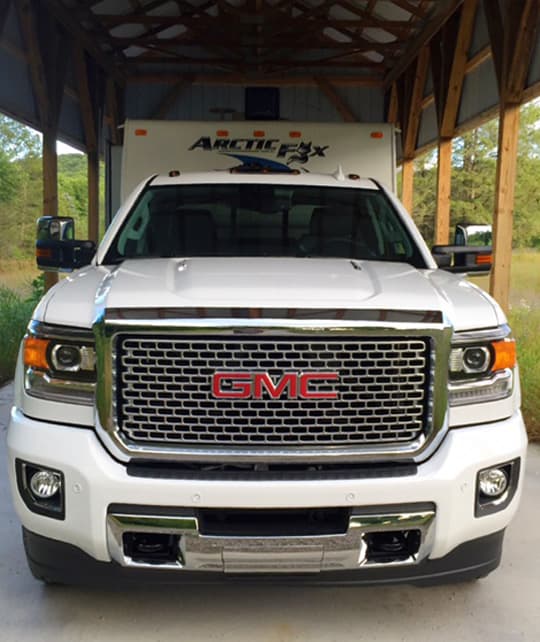 Above: Their Arctic Fox and GMC are preparing to go on many adventures together

Now that our little girl is home, and the Denali and Arctic Fox are getting to know each other, the excitement is building.  She may purr like a kitten, but don’t be fooled.  She is a beast with the heart of a lion.  The only thing left to do is to get her all accessorized with Torklift International products and the two of them will be ready for their first adventure together.

Truck Camper Magazine toured the GM Flint Truck Assembly Plant in September of 2011 and published an article about the factory and our experience.  The photography and animations alone are worth a look.