Larry Chiuppi and Mike Dahlager had some very close calls with their pop-up truck campers.  This is what can happen when you don’t catch an open latch – and hit the road.

It had been some time since we had taken a trip in our Four Wheel Camper.  In my haste to get on the road, I lowered the camper roof but neglected to clamp the six roof latches.  Off we went driving about 40-miles at highway speeds up to 70 miles per hour.  We were completely oblivious that anything was wrong.

When we arrived at the state park to check in, we stepped out of the truck and got quite the shock.  The front portion of the Four Wheel Camper roof was completely up and extended in the camping position. 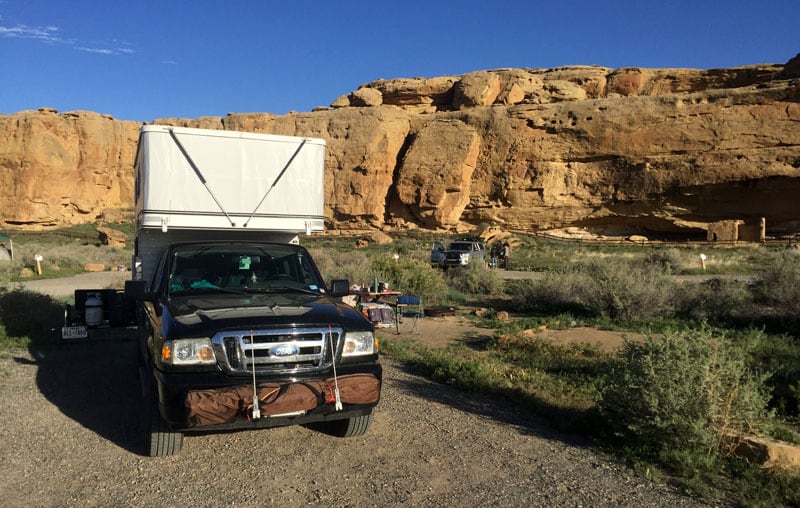 What’s amazing is that there was absolutely no damage.  That speaks to the quality of construction by Four Wheel Campers.  We went on to have a wonderful trip in our camper.

We will never forget the surprise of finding our camper half-open when we arrived at the state park.  Now we are extra careful to check all six latches on our pop-up truck camper before driving.

I accidentally left the front vent of my 1964 Alaskan Camper open, entered the freeway, and then looked in the rearview mirror to merge.  To my horror, I saw the entire top section of the Alaskan Camper raised about six-inches!  This event produced a superior pucker moment.

Never leave the front vent open in an Alaskan Camper NCO (non-cabover) model.  Had I not caught this mistake in time, there’s no doubt I could have done major damage to my camper.  Lesson learned.