Now you might think, with all of our experience, that we’re truck camper loading experts.  Give us a laser pointer and an eye patch and we’ll load a truck and camper with one pinky, while solving a Rubik’s Cube, and reading War and Peace – in Latin.

The truth is that loading new truck and camper rigs is still a challenge for us.  We have our preferred techniques, but it still comes down to using our truck mirrors, taking it slow, and having a spotter to continuously check alignment, wheel well space, and fender clearances.  Even then, the experience often tests our marriage as we exchange various hand gestures, voice commands, and other communications not fit for these fine family-oriented electrons.

Okay, it very rarely gets that serious, but it is still a challenge for us to load with either an unfamiliar truck or camper.  If it’s both a new truck and camper, I always have a box of chocolates, a dozen roses, and a, “I’m really sorry I was such a dodo head, again” letter at the ready.  You laugh, but Angela knows exactly what I mean.

This past week, we had the opportunity to load not one, but two truck campers.  One was a camper we will be reviewing in the coming weeks, the other was our new-to-us camper.  Both have what we consider to be an incredibly annoying attribute that darn near necessitated calling a Priest, or at least a good attorney.  I joke, but this one attribute really did spark a heated conversation between the two of us.

What is this annoying attribute?

I can hear you thinking, “What the heck is a sub-wing, Gordon?”  Well, that takes some explanation, and a few photographs.

Fire up your imagination and picture a truck camper rig in your mind.  First, unload the truck camper and put it on all four corner jacks on the ground.  Then walk in front of the truck camper so that you’re facing the nose of the camper head-on. 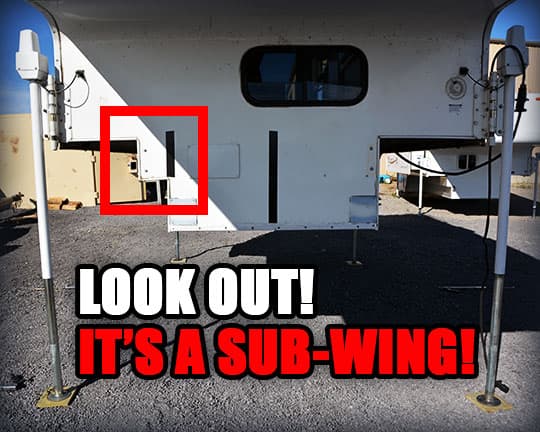 Above: Our camper has a sub-wing on the passenger side.  See the red box above.

Just above the lowest part of the camper body, it is all to common to find box-shaped parts that protrude from the lower part of the fat T.  These box-shaped protrusions are sub-wings.

Of course they’re not actually called sub-wings by the industry, but I have no idea what they’re really called, so I’m calling them sub-wings.  Besides, what’s the point of being the Publisher of this magazine if I can’t make up names for stuff I don’t know.  I’m kidding about that last point, but I really don’t think these box-protrusions have a formal industry name.

Anyway, these sub-wings often protrude a few inches from either side of a truck camper giving the interior of the camper a few more inches of interior floor space and storage.  In our camper (pictured) there’s a sub-wing on the passenger side which gives us more space for a bathroom. 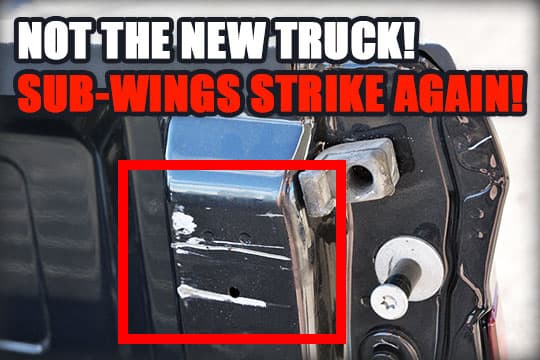 Above: This is the aftermath of a recent sub-wing attack.  Our brand new 2014 Ram 3500 suffered an egregious scratch on the inside upper rail, just before the tailgate.  Oh, the horror!

Well, hold on just one second there sub-wing chanting person.  Those sub-wings happen to dramatically tighten the available space when loading and unloading a truck camper.  Those sub-wings are often what rubs the pretty paint on your truck bed, or causes you to pull up match.com on your smartphone after an otherwise pleasant morning with your formally significant other.

Sub-wings giveth floor space and storage, and maketh loading more difficult.  At least that’s how the conversation went between Angela and I this week.

After loading our camper this past week, Angela asked, out loud; Would we be willing to give up an inch of interior floor width to have easier camper loading and unloading?

“Brilliant!”  I thought.  That sounds like an excellent Question of the Week.  Has our community been annoyed by sub-wings while loading and unloading, or not?  If yes, would they be willing to give up an inch of interior floor space and/or storage to make loading and unloading easier, or not?

This week’s Question of the Week is Angela’s question, “Would you be willing to give up an inch of interior floor width to have easier camper loading and unloading?”

We’re putting sub-wings to a vote.  It’s time to choose between two very important truck camper priorities; ease of loading and unloading, versus interior floor space and storage.  We can’t wait to see where this cage match ends up.

Click here for the results to the sub-wing vote.