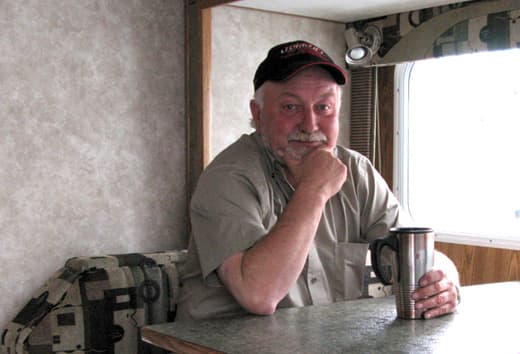 A Celebration of Life will be held at Columbia Hall, 455 Ellis Avenue, Naramata, British Columbia on Sunday, September 8th at 2:00 PM.  In lieu of flowers, the family asks that attendees please bring a memory or story about Bob as he would love to be remembered with laughter.

Inventor of the Truck Camper Slide-Out

Bob said the challenge was almost humorous at the time, but he convinced himself that it was possible on the way home.  When the camper was complete, Stew bought the unit and the slide-out truck camper was born.

The truck camper industry watched for years to see if Bob’s slide-out truck campers would fail.  What they didn’t know is that Bob had used two two-inch by one-inch steel gear bars and a steel bar under the slide to make sure his slides would succeed.  Innovation was important to Bob, but never at the detriment of quality.

In 1997, Bob built twenty double-slide truck camper models, another industry first, but later decided that two slide compromised too much structural integrity.  It would be many years before another manufacturer would attempt a double-slide.

Bob is also credited for inventing the basement model truck camper, introducing rear awnings on truck campers, being the first to eliminate the use of butyl tape on truck campers in favor of Sikaflex, and a unique roof edge system that eliminated the need for caulking.  Clearly, Bob was a slide-out, or two, ahead of his time.

In the RV Business Since Age Fifteen 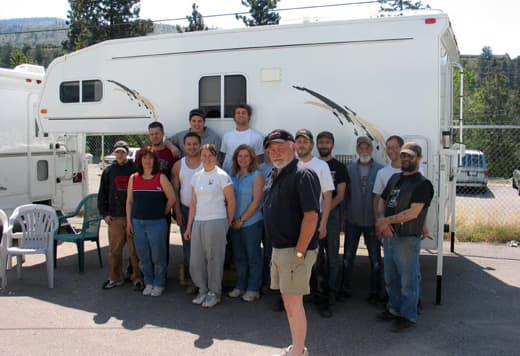 Above: Bob and his team at Snowriver in 2007

In May of 2007, we asked Bob how he got started in the RV business.  Bob explained, “When I graduated grade eight, my father decided that was enough education.  I got a job building Scamper travel trailers in Alberta.  I worked there for three years and then heard that they were opening a factory for mobile homes in Penticton, British Columbia.

I wanted to live there, so I moved and worked for General Coach for five years.  Then I was asked to go to Oliver to build Citation.  I worked there for ten years, most of the time as a supervisor in charge of research and development of new models.

Then there was an opportunity to go to Okanagan RV in Penticton to start building a Class C motorhome.  I was in charge of anything with wheels and made sure new products were CSA and DOT approved.  I worked there for fifteen years.

Then Okanagan was bought by Thor Industries, the parent company of Airstream.  I got to prototype the first Airstream van and worked with Thompson Wade, the owner of Thor.  Then Thor sold Okanagan and a lot of us were unemployed.

I started Interior RV in 1991 to build high line 5th Wheels and hired people from Okanagan.  After three or four years, we decided to build truck campers when we weren’t building 5th wheels.  We created a basement, which gave us five feet of floor space, and put the tanks in the basement and heated them.  People thought we were crazy when we built a slide-out in a camper.  Now we’re very busy building truck campers with slide-outs.  We no longer build 5th wheels.  I don’t think I could work for anyone else now.  I’ve been spoiled.”

When the recession struck in late 2008, Bob immediately saw the signs of a long drawn out recovery and decided it was time to close Snowriver and retire.

News of Snowriver closing shocked the truck camper industry and community as the company was on top of their game manufacturing some of the most respected high-end truck campers on the market.  To this day, many still believe Bob Mehrer and his Snowriver production team made the highest quality slide-out truck campers ever made.

We searched through our interviews with Bob and found a few choice quotes that really illustrate how Bob ran his business and enjoyed spending time with his customers.

“Too many manufacturers sell a camper and never want to see the person again until they’re ready to buy.  My job as customer relations is to enjoy people.  Every time we sell a camper, I have a potential new friend.  I’m not afraid to meet our customers because we build campers of high quality.”

“When people come to visit, they stay in my back yard.  I’ve met so many interesting people.  People think I’m very giving, but I’m really taking.  I have a customer who worked for NBC and knew Jay Leno and Johnny Carson and has great stories to tell me.  That’s an interesting part of my life.  I get so much from people.”

“I visit people who have my truck campers.  This August, I’m going to Vancouver Island with a customer who owns a salmon charter.  In October, I’ll be moose hunting with another customer.  In the winter, I visit customers in the desert.  I really enjoy doing these things and meeting the customers.”

“I have the easiest job in the world.  I really do.  My employees look after me.  They’re excellent people and I don’t do a lot anymore.  My job is basically customer relations.  Since that’s my only job, I do it as good as I can.”

“It wasn’t just me who came up with the slide-out.  It was the hard work of five or six employees.  We share everything and have an open door policy for ideas and complaints.”

“Our customers have faith in us and we can’t let them down.  If we ever come to the point where the customer can’t be satisfied, then we’ve failed.”

“The best sales team is the people who own our campers, if we look after them.  Wade Thompson of Airsteam told me that if you build a good product and service the heck out of it, you can’t go wrong.  That was the best advice.”

“We’re small and we don’t have the buying power of the big guys.  They buy 3,000 water heaters.  We only buy 150.  One thing I can do is service.  I build 150 campers a year.  If I have trouble with 10%, I can look after 15 people very well.  Good service is our way of competing.  And good service builds a loyal following of customers.”

“I don’t know of one unhappy Snowriver customer.  If somebody is unhappy, my home phone number is on our web site.  There’s always something we can do to keep the customer happy.”