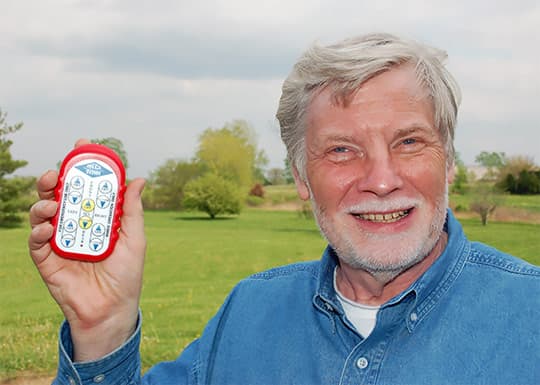 Bob earned his degrees from the Illinois Institute of Technology and was a member of the Illinois Air National Guard where he served as a cryptologist.  Bob was born and raised in the Catholic faith, loved to be outdoors, and enjoyed nature.

In lieu of flowers, tribute memorials may be made to Saint Judes in Peoria or to the Wounded Warrior Project.

Before becoming part of the RV business, Bob was in management at Johnson & Johnson.  When the company asked Bob to relocate to the East Coast in the late 1970s, he left Johnson & Johnson and, with his wife, Sharon, bought a metal fabrication business, Vindee Industries Incorporated.

At the time, one of Vindee Industries fabrication clients was Titan Jack, a company specializing in mechanical camper jacks.  Soon after, Bob and Sharon acquired Titan Jack.

At the time, Rieco was a hydraulic camper jack company owned by Andy Peralez.  Bob and Andy worked together on a joint marketing program for their respective camper jack companies.  A few years later, Andy sold Rieco to Titan Jack creating the company we know today as Rieco-Titan.

Under Bob’s leadership, Rieco-Titan had a strong reputation for listening and responding to both truck camper manufacturers and end users.  One such idea was brought to Bob by Northwood Manufacturing who asked for a back-up wired remote control in case the wireless jack remote had a low battery, was lost, or otherwise rendered unusable.  This request resulted in the Rieco-Titan Red Emergency Remote in the Spring of 2010, now a very popular standard feature on all OEM Rieco-Titan remote controlled electric jack systems.

A more recent example of Bob’s collaborative efforts is Palomino’s pop-up lift system.  Throughout 2013, Bob and the Rieco-Titan engineering team worked closely with Palomino’s design and development team to create an innovative remote controlled electric roof lift system that rocked the truck camper marketplace.  Once again, Bob’s focus on listening to his customers and pushing for quality and safety had paid off.

We first met Bob at the Truck Camper Show in Ogallala, Nebraska in July of 2007, and then soon after at Northwood Manufacturing in November of 2007.  He was walking the Arctic Fox truck camper production line and listening to the Northwood management and manufacturing teams for areas to improve Rieco-Titan’s products.  Bob made sure to visit his customers as often as possible, and always kept his ear to the ground looking for ways to improve the products Rieco-Titan manufactured.

Here are a few quotes from Bob McCarthy from Truck Camper Magazine that hint at Bob’s wonderful sense of humor, and show Bob’s dedication to safety, quality, and integrity.

“I suppose if you followed the English language pronunciation it would be Ree-Coe, but it’s pronounced Rye-Coe.  At any rate, this is what Andy Peralez, the original owner of Rieco, taught me.  The name Rieco stands for Rush Industrial Enameling Company. The company was originally on Rush Avenue in South El Monte California.   But you can call us whatever you want.  Call us Ree-Coe, call us Rye-Coe, just call us.  As for the spelling, put a hyphen between the names, Rieco-Titan.”

“Design comes first, and then testing, modification of design, prototyping, and field testing with actual campers.  Every part is checked once it’s in the door.  If anything isn’t up to specification, it’s isolated.  Then there are multiple quality check layers during manufacturing while stamping parts, welding, etc.  Each operator knows the importance of quality.  Everyone here is concerned about quality and service.   Our average seniority is over 15 years.  Our team knows how important their products are.   For example, we have tool and die makers tour the entire plant in the morning and afternoon checking the tooling component specifications.   It just flows from there.”

“Consistency is the key to camper jack quality.  The last jack on the assembly line must be identical to the first.   Everyone at the plant has the same belief and understands why that’s important.  That’s how you maintain quality.  And we have layers of quality control standards, inspectors, and documents.  But everybody does that.  Employees must understand the importance of consistency and be open and forthright.  Anyone can make a mistake but we make sure our employees don’t feel they need to hide it.  It’s about integrity, honesty, and credibility.  You have to protect it.”