Anne and Joe Brown were out on the road in their 2014 Ford F-450 and 2011 Chalet DS116 rig for a little over 15 weeks; 111 nights to be exact.  Thanks, Anne and Joe, for sharing this fun report from your cross-country trip this past spring.

In early April, we bought a 2014 Ford F-450.  Joe had been wanting a larger truck for a while and this one just sort of fell into our laps.  Happily the F-350 ended up with a truck camper friend.  After having new Torklift tie-downs, bump stops, and air bags installed, we were ready to hit the road. 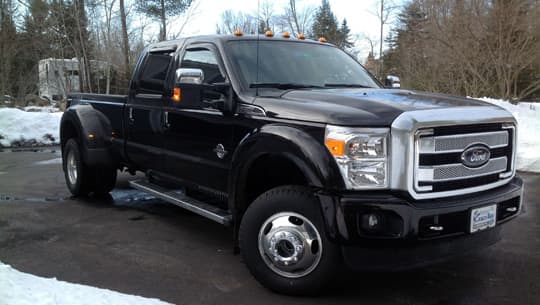 We met up with a few truck camper friends on a shakedown cruise at Scussett Beach on Cape Cod Canal.  It was a good thing to test all systems before hitting the road as we “ran out of propane”.  Read that as, “we forgot to turn the bypass valve on and discovered the inverter has two switches, one of which was off”.

Once again we headed to Alaska, did our usual side track, and never got there, but we get somewhat closer each time we try.  We started with a few days at Assateague Island National Seashore in April before the Mid-Atlantic Truck Camper rally.

From there we went to Xtreme Campers in North Carolina to get the new rear view camera working and then drove through North Carolina, Arkansas, and Mississippi staying at mostly State Parks or National Forests.

What can you say about Texas other than it is huge, has very fast roads, and is full of fascinating geology?  Visit Caprock Canyons State Park if possible and walk the trails around the canyons.  Watch out for bison as you go. 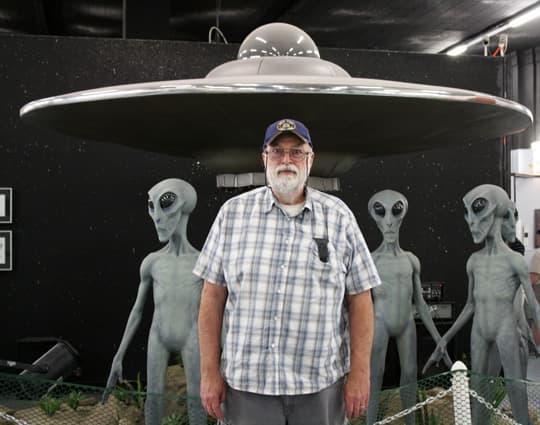 Yes, we played tourist in Roswell, New Mexico stopping at the International UFO Museum and Research Center.  It was campy and lots of fun.  Joe liked his bodyguards.

The Valley of Fire BLM land near Carrizozo, New Mexico is worth the miles to get there.  You can walk out into lava fields and see cactus in bloom.  Two recommendations by a park ranger were El Morro and El Malpais in New Mexico.  Both had long walks around towering bluffs with native petroglyphs and “graffiti” left by Spanish and early settlers.

My most favorite place this year, and a true highlight, was Chaco Canyon National Historical Park in eastern New Mexico. 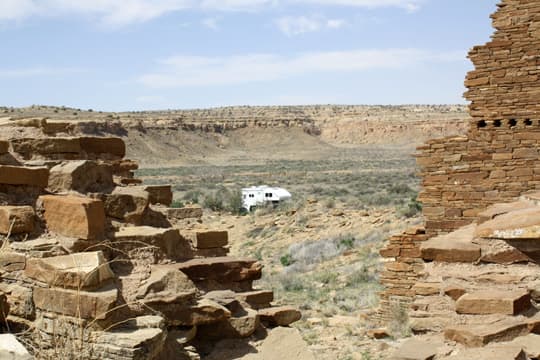 Even driving as carefully as possible, we still managed to take such a large bump that we put a cosmetic crease in the side of the camper where it hangs over the tailgate.  Worth it?  Every bone-jarring bump, yes.

To be able to walk among ruins of a civilization that thrived from 850 to 1250 A.D. was pretty special.  Camping in the desert with no man made lights in view was awesome.  Go if you get the chance.

Also, always look down as well as up. 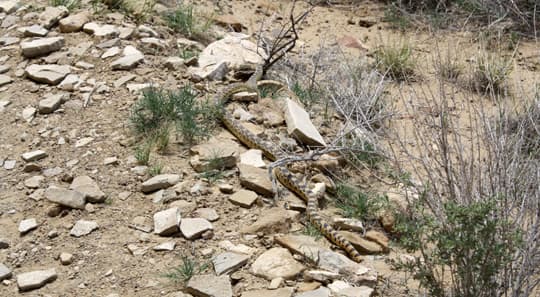 We also visited Canyon De Chelly in Arizona and the south rim of the Grand Canyon.  At Lake Powell we had our first experience driving on sand.  We probably did everything you aren’t supposed to do driving on sand, but we did make it back out without getting stuck.

Cutting over into Oregon we met up with two truck camper couples from back east and had a delightful day as we camped on the banks of the Metolius River on National Forest Service land.  We worked our way up the coast of Oregon and Washington and then cut east to meet up with another truck camper couple just north of Seattle.

Now the decision; Alaska or not?

We’d already been almost 7,000 miles on the road and Alaska would add another 6,500 to that before we were home.  I think it’s time to stop taking detours to Texas and go straight to Alaska.  However, we were too close to Banff and Lake Louise in Alberta, Canada to not to go there, so we did.

The Canadian Rockies are astonishing, still snow capped and pristine.  We walked many, many miles on the trails and in the town of Banff itself.  Fortunately, this small black bear was beside the road, and not facing us on the trail. 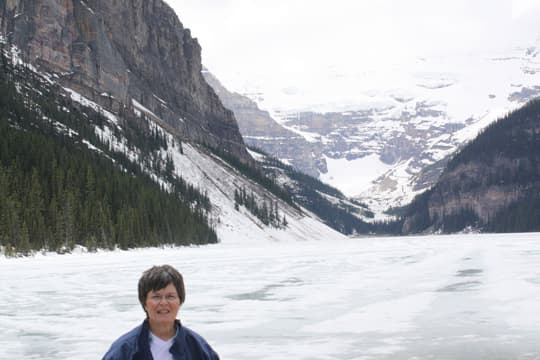 It was time to head towards home so we cut back into Montana into one of my favorite places on earth, Glacier National Park.  There was no one there but us as St. Mary’s campground had opened just that morning.  Have you ever seen a Montana night sky, or woken up to the sound of elk feeding beside your camper?  Go there. 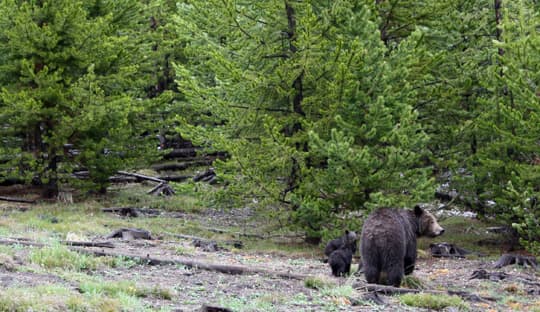 We went south to Yellowstone for two days and a met up with truck camper friends who had moved west.  Truck campers are everywhere!  A real highlight on leaving the park was a black bear with three cubs standing near the road.

Home called so we trekked through a four day wind, rain, and hail storm into Montana, North Dakota, Minnesota, Michigan, Ontario, New York, Vermont, New Hampshire, and Maine!  There are more details and many more photos on our travel blog; On The Road Again.

Thanks go again to Bill Penney at Truck Camper Warehouse who rescued us from a battery that exploded just as we entered New Hampshire.  No idea why other than possibly an internal plate cracked from all the rough roads.

We’ve since camped with truck camper friends at North-East Truck Camper rallies in Rhode Island, New Hampshire, and the big one at Gettysburg, Pennsylvania.  We’ll end the truck camping year with meet ups in Massachusetts, and the final winter freeze out at Recompence campground in Freeport, Maine.

So, we used our camper a lot this year; 15,493 miles and 111 nights to be exact.  We’re already planning next year’s trip and maybe this time we’ll go straight as an arrow to Alaska.