Ron K. has built one of the most unique and visually incredible custom truck campers we have ever seen; The Odyssey.  And if the exterior isn’t amazing enough, just wait until you see the interior.  180-degree vertical windows anyone?

The Story Behind The Odyssey

“Do not let them leave.  Lie in the road if you have to, but don’t let that truck camper leave.”

I was probably being inappropriately direct with fellow truck camper and dear friend, Ray Fair, but his Eagle Cap rig was parked directly across from one of the most unique custom truck camper builds I had ever seen.

Despite my persistent looming, lurking, lingering, loitering, feet dragging, shuffling and just plain standing, staring and fittering about, I had been unsuccessful at finding – much less coming in contact with – the owners of this most amazing truck camper creation.  It was making me more nutty than usual.

“Literally lie down on the ground and stop this rig from leaving,” I repeated to poor Ray.  Normally he might not have appreciated my anxious insistence, but he could clearly see the urgency of this situation.  The camper before us just had to be reported in Truck Camper Magazine.  It was a moral imperative.

Finally, I worked up the nerve to approach the odd craft.  I first met Linda.  I introduced myself, told her about Truck Camper Magazine, and asked if she was the inventor of this curious camper.

A few seconds later, Ron emerged from the rear camper’s door.  Again I introduced myself and told Ron how much I admired his unique camper.  Then I revealed my true intentions.

“I’m the Publisher of Truck Camper Magazine and I simply can’t let you leave until you do a story with us.  Here are your two choices.  One, we can interview you for a written story with photographs.  Two, I can shoot a video with you on camera with your camper.  Which would you prefer?”

Ladies and gentlemen, this is called an assumptive sale.  The idea is you skip past the, “Yes, I’ll do that” and go right to a decision after that point.  Imagine you’re thinking about buying a Porsche 911 and the salesman says, “Would you like that in blue or red?”  You pick red, and out comes the paperwork.

“What do you think would be best?” Ron asked.

Without blinking an eye, Ron answered, “Let’s do a video then.”

Honestly, Angela and I were stunned.  We literally had met Ron about 10-minutes prior, and he had just agreed to be on camera.

After briefly talking about the video plan, we listened intently to Ron as he explained the history of the camper, how it was built, and what they were doing with it.  Linda and Ron then let us into their unit to have a look.  The Odyssey was even more amazing on the inside.

With Ron’s stories and the Odyssey fresh in my mind, I went back to our camper and wrote a shot list and script for the video.  The next day I gave Ron the script and had him check it for accuracy, and add anything he thought was missing.  Ron made a number of important changes and additions. 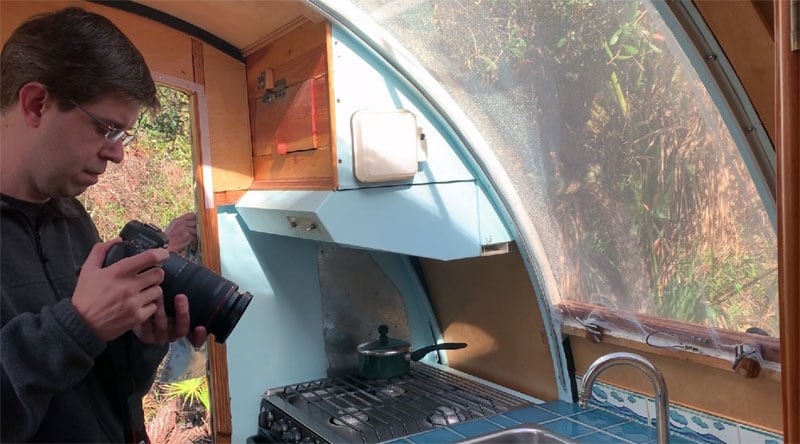 Above: The Odyssey was filmed entirely Canon EOS-R and Canon RF 15-35mm f/2.8L

Due to scheduled activities and weather, we didn’t shoot the video until a few days later.  Starting at 8:00am on a Sunday morning, the shoot was completed in about 5-hours – interiors, exteriors, on camera and voice over.

We recorded the voice over in the dinette of our camper.  Ron was on one side of the dinette and I was on the other with the camera, microphone and headphones.  Angela stood in the hallway directing the script and keeping us on task.

Ron’s speaking voice was so good I could hardly believe what I was hearing. Angela told Ron he should read for audiobooks.  All I knew was that Ron’s incredible voice over was going to make the video so much better than I had imagined. 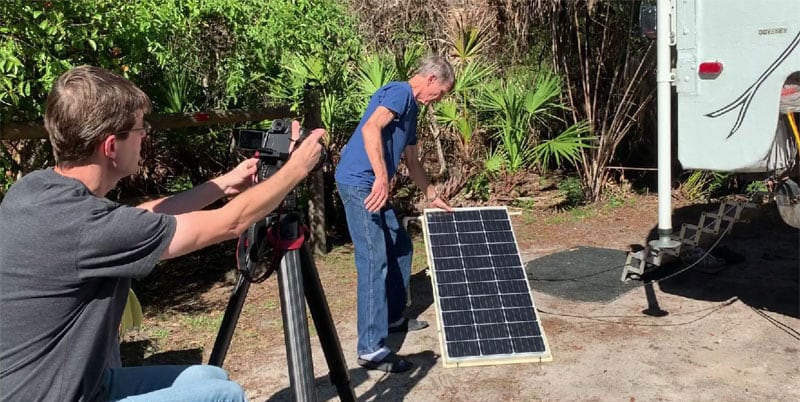 After the shoot was completed, Angela and I left the campground and headed to our next destination.  We would meet up with Ron, Linda and the Odyssey later, and possibly get some additional shots.

Well, that’s not what happened.  Before I knew it, the video was assembled.  With the right music bed, sound effects and edit, The Odyssey just came to life.  I’ve never had a video come together so easily.

I want to thank Ron and Linda for being so incredibly gracious with their time and for being so open and accommodating to this project.  Thank you!

I’m also thankful to the truck camping gods and the universe for putting all of us in the same place at the same time.  How is it that Ron, Linda and The Odyssey just happened to be camped down the way from us?  Nothing less than road magic.