Camped behind the bucking chutes in his Capri Camper, 29 year-old professional bullfighter, Jake Geiger, faces down 2,000-pound bulls weekend after weekend.  Think this isn’t dangerous?  Check his broken arm, and roll the video.

The Story Behind The Bullfighter

“There’s a bull rider here with a Capri Camper.  And the camping field is open.”

On the phone was our favorite TCI Agent, Roy Garland.  As Truck Camper Intelligence Agents go, none seem as well suited to the task as Agent Garland.

“I made contact with the Capri owner.  He’s quite friendly, and expecting you.”

As it was a Friday morning, we completed publishing, broke camp, and set out for Brighton Field Day Festival and Rodeo in Okeechobee, Florida.  When we arrived, the situation had changed.

Without warning, the rodeo had shut down entry to the campground.  “We can’t let you in until the rodeo event is over for the day,” said one particularly insistent guard.  “People and horses walking around the premises.  You need to wait.”

The enforced holding pattern was held in the event’s public parking area – a welcome respite from a busy work week.  After a late lunch, I checked the status of my video production gear.  Everything was charged up and ready to rock.

When we finally got the all-clear, we drove around the back of the festival grounds and approached the designated RV camping area.  There we found Roy’s Ford F-450 and Northern Lite 10-2 rig camped next to fellow truck campers Carl and Kay (Okanagan 117) and Ray and Brenda (Eagle Cap 850).

When we asked the rodeo management team who the owner of the Capri Camper was, there was some confusion.  “That’s Jake Geiger’s camper.  He’s not a bull rider, he’s a bullfighter.” 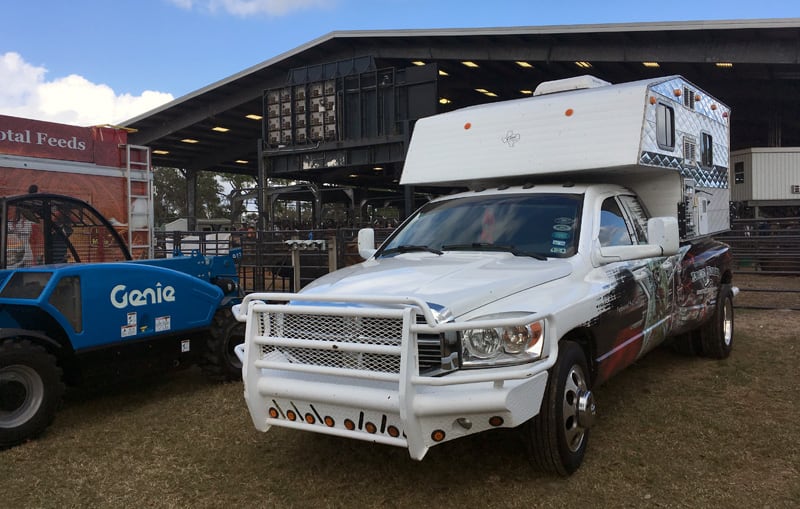 As we were about to learn, this was actually very good news.  First, it meant Jake, the Capri Camper owner, would not be leaving that evening.  Evidently, bull riders often arrive the day they’re scheduled to ride a bull, ride the bull, and then leave that evening.

Bullfighters are in the arena for every single bull ride, over the course of the rodeo event.  Their job is to protect the bull riders.  Jake not only wasn’t leaving, but he would also be on the job Saturday and Sunday.

A few minutes after learning his identity and job description, we were introduced to Jake.  He was immediately agreeable to working with us with our video.  Honestly, he could not have been more gracious with his time and attention – especially considering he had no prior warning of our plans, other than what Roy had indicated. 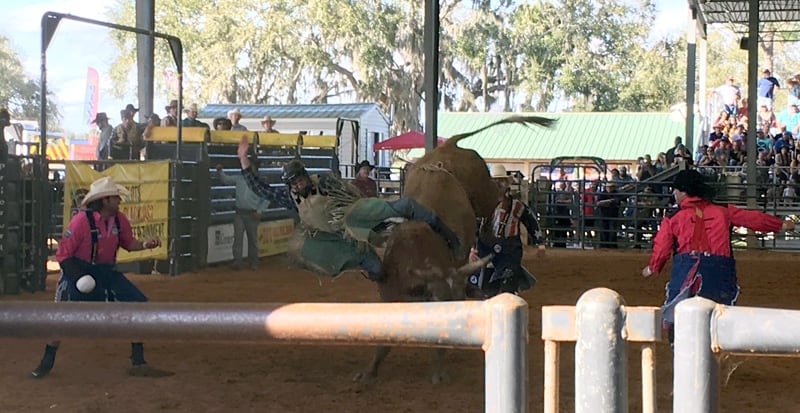 The following afternoon I filmed Jake fighting bulls as bull rider after bull rider attempted to endure 8-seconds of extreme bucking, kicking, and twisting.  You really can’t appreciate what these riders experience unless you see it in person.

What Jake was doing looked particularly insane.  These bulls are literally bucking, kicking, and twisting within feet – sometimes inches – of Jake and his fellow bullfighters.  Watch closely and you’ll see a few close calls in the video.  It’s nuts.

Voice Over and Xtreme Bulls

After our conversations with Jake on Saturday, and observing him in action, I returned to our camper and wrote a script for the video.  The script outlines what the video is about, the voiceover topics for Jake, and the needed video and sound required to assemble the video. 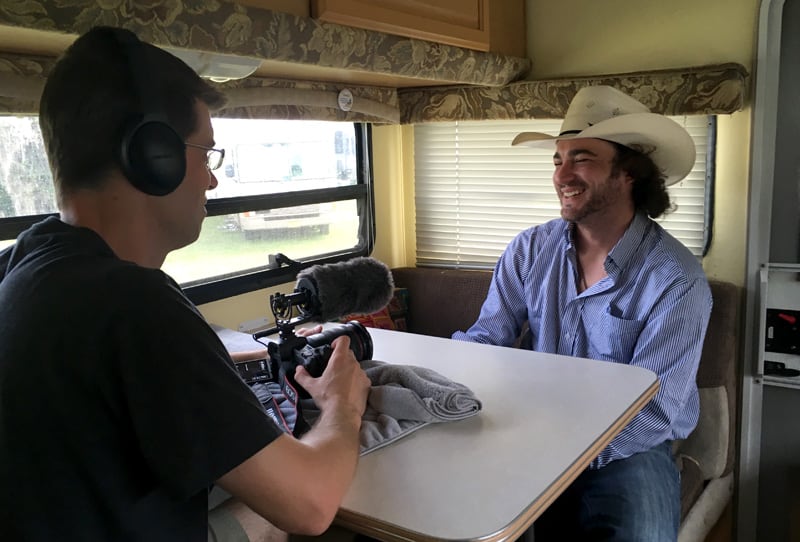 On Sunday morning, we recorded Jake’s voiceover in our camper.  Topic by topic, we asked Jake to talk to us about his career, bullfighting, and his dream.  You hear Jake’s voiceover throughout the video. 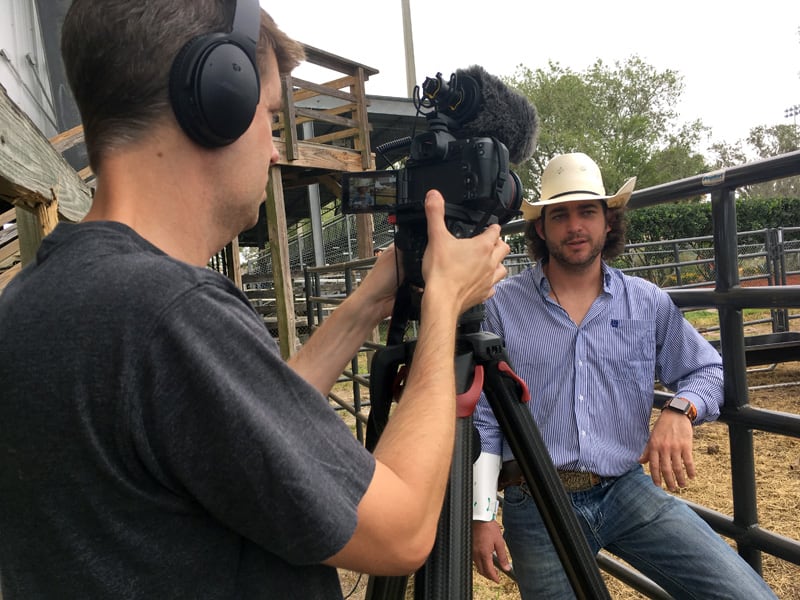 After recording the voiceover, I shot some video of Jake getting ready for that day’s event, Xtreme Bulls.  Then we stood on the sidelines of the arena and shot Jake and his team of bullfighters as they faced down bull after bull to protect the bull riders.  Did I mention this is completely crazy?  And I thought running an online magazine took courage.  Not so much.

Some Important People To Thank

Once again, a lot of people need to be thanked for helping us make this video possible.  First, without Roy Garland’s tip we would have never known about Jake or his Capri Camper.  Thank you, Agent Garland.

The management at the Brighton Field Festival wasn’t exactly sure what to make of us initially, but they quickly came around and granted us the required access we needed to make this video happen.  Thank you!

If I don’t thank Angela, I might get kicked out of the camper.  After all, she helped me develop the concept and script, championed the shoot schedule and logistics, listened to me gripe about the changing light conditions and noise in the arena, and generally kept Jake and I on task during the production process.  Thank you, Angela!

Finally, we can’t thank Jake Geiger enough.  Not only was he extremely cooperative, but he was also fun to be around and work with.  He even started teasing me about my directing… “Let me guess.  You want me to say that again, right?”  That’s right Jake – one more take!  Thank you, Jake!

Next Up: Something Buzz Worthy

We have already shot another short film.  This time it’s back to acting, just bee-cause.  Can you gas what it’s about?  Get ready for one of the most controversial topics in all of truck camperdom – with a dash of humor.

For more fun, visit our YouTube channel and watch all of our Truck Camper Magazine videos.  Click here for a free Capri Camper brochure.