Should Jim sell his truck camper and buy a motorhome?  There’s only one way to find out.  With a Northern Lite on the line, Charlie transports Future Jim back in time.  Great spectacular!

Anyone who hears that should think, “How did that happen?”  And, more importantly, “Why?”  We certainly did and were originally planning to publish a story with the Kaleys titled, “The Boomerang Truck Campers” or, “Return From The Dark Side” – something like that.

After listening intently to Jim’s unbelievable story, we were haunted.  If only he could travel back in time and tell himself not to sell the truck camper.  He could have saved a lot of stress, hassle and money.

On top of that, his story brought up something that doesn’t get enough attention.  The average age of truck camper owners is now in their late 50s to early 60s.  With that comes an increasing need for mobility, comfort and safety.

In the truck camper world, that means easier and safer entry and exit steps, and easier and safer cabover entryways.  Unfortunately, most truck camper manufacturers have all but ignored this trend forcing many to consider to small motorhomes – just like the Kaleys.  I wrote about this back in 2016 in a Special Report titled, “Mobility and Truck Camper Design”.  It’s the underlying theme of this film.

Producing Back To The Truck Camper 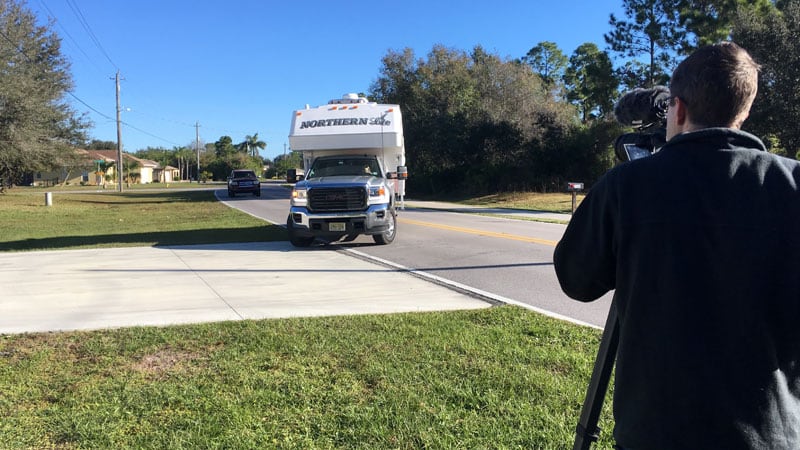 So what if Jim could go back in time and talk to himself?  What if we made a narrative film that allowed Jim to do just that?  And in this film we could learn his story, and gain perspective about what it’s really like to go from a truck camper to a motorhome – and back.

With the theme of time travel, the idea of making a Homage to Back to the Future was inevitable.  While not a parody, many of the lines, shots and concepts of Back to the Truck Camper were directly inspired by the 1985 Hollywood blockbuster.

For example, the, “Who’s the President of the United States…” line came directly from the original film.  If you’re a fan of Back to the Future, you’ll find a few more paraphrased lines and styled shots tucked here and there.

Naturally, any film about time travel takes a few liberties with reality, but there are a great number of real things and truth in this film.  Jim and Janet really did buy a Northern Lite truck camper, sell it, buy a Class C motorhome, sell it, and return to a truck camper.  Charlie and Jeannie really have looked at motorhomes, and haven’t found anything they like better than their truck and camper.  All of that is true.

In fact, the characters and backstory of this film are all true.  More importantly, the story Jim tells himself on Charlie’s lanai (a screened Florida room) should be very insightful for anyone considering switching to a motorhome.  Again, that’s why we made this film – a lot of truck campers wrestle with this question.

But that’s not all that’s real and true.  The very first shot of the film features Charlie’s father’s actual Buffalo State briefcase.  Charlie’s dad made that briefcase and kept his project drawings and drafting tools in it. 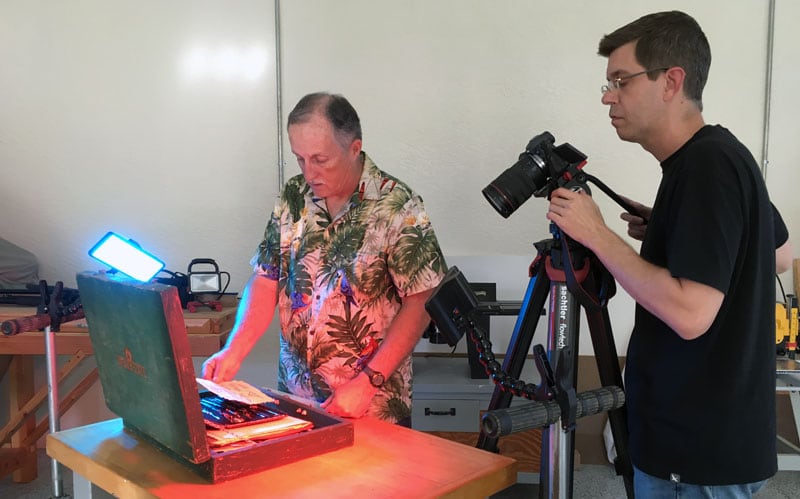 For the time travel formula, Charlie gave me a sheet of manila paper and a pencil from that case.  I then combined various real mathematical equations for time and space-time (thank you, Google).  Add Einstein’s, “Energy equals mass times the speed of light squared” and a touch of my own personal whimsy and you have a legit-looking time travel formula. 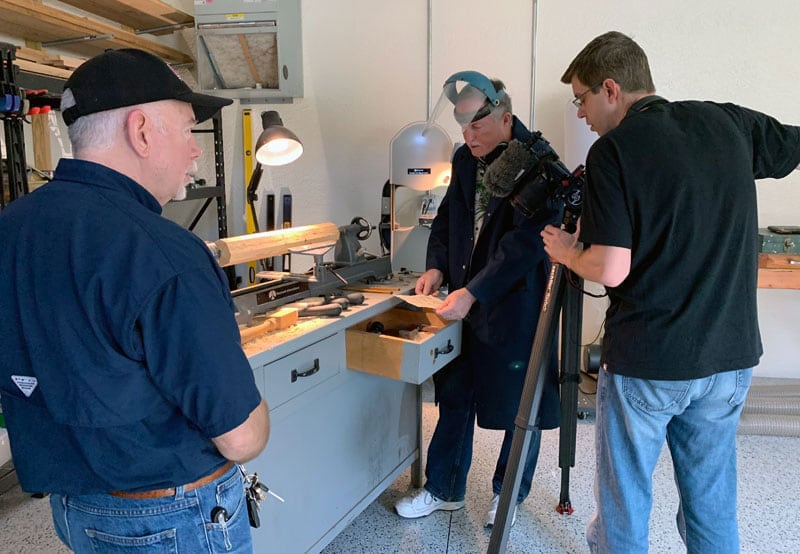 To give the document an aged look we folded it, tore the edges, roughed it up a bit.  Then we put the manilla paper back into Charlie’s father’s box – right where we found it.  The time travel formula isn’t exactly real and true, but it’s as close as I could figure it.

The wood lathe really did belong to Charlie’s father.  Did he invent a time transport and install it into his wood lathe?  No, but he really was an engineer is the early days of computers and spent his career in that industry.  It was fun to work as many real and true details into this film as possible. 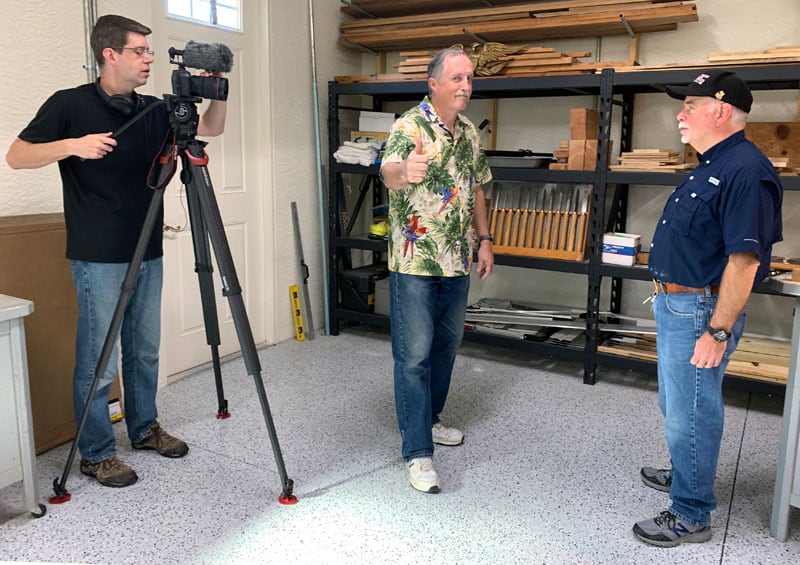 Having been in Charlie’s wood shop before, I was very concerned about the pronounced echo in that space.  Florida building codes require structures to have concrete floors and walls.  These hard surfaces tend to create echos that sound terrible in a video.  Most Floridian home owners dampen these echos with furniture, carpeting and window drapes, but Charlie’s wood shop offered none of these features.

I actually fretted over this for a couple days before I got the idea to work the echo into the script.  What if the echo was directly pointed out about the same time the viewer heard it?  More importantly, what if the echo actually triggered the time-travel concept of the film?  That’s it!

I have to thank filmmaker, Robert Rodriguez for this concept.  In his book, “Rebel Without A Crew” he tells micro-budget filmmakers to work with what they have.  If you have a Ford Pinto, for example, don’t write a scene with a Porsche 911 – go with the Pinto.

Robert’s point was about using and writing scripts around the locations and props you have, and it made sense to apply his teaching to the echo.  And magically, the sound situation worked beautifully into the very concept of the film.

The Two Jims That Terrified Me

In the, “Eagle Cap 1200 vs Eagle Cap 1165” video from January, there was a split-second when there were two of me on camera.  This simple effect was created using a split screen.

Fast forward a month or so and I thought, “Why not use the split screen trick to create two Jims on camera at the same time?  After all, if it worked for a second, why not for several minutes during a back and forth conversation?  Simple, right?”

Well, not so much.  First, the camera need to be 100-percent locked down for focus, exposure and every other setting during the duration of the split screens.  Then you can’t move or so much as bump the camera.  Then you have to get the dialog timing right. This last part ended up being the hardest to achieve.

After shooting the video, I assembled the split screens and played back the sequence.  At first blush, the two Jims looked fantastic.  Unless I looked closely, I couldn’t tell it was a split screen.  There were two Jims, face-to-face, at the same time!  Then they started talking.

To my absolute horror, I got the timing wrong.  Current Jim was talking over Future Jim, and vice versa.  My career in filmmaking was over.  Nobody would ever work with me again.  Angela watched me pace up and down our 11-foot camper floor, freaking out like the jacks had fallen off.  I was ruined.  Ruined!

Then I had an idea.  Using my video editing program, I was able to speed up and slow down the Jim that wasn’t talking.  If I needed more time, I slowed Jim down.  If I needed less time, I sped Jim up.  When played back, you really couldn’t tell that Future Jim is playing back at 120-percent speed, or that Current Jim is playing back at 80-percent speed.  I was saved.  And, once again, Angela considered throwing me out the window.

A Lot of People To Thank

This short film would not have been possible without the help of six fellow truck campers who joined me in this epic adventure.  First and foremost, Jim and Janet Kaley trusted me to tell their amazing story in a new way, and then agreed to act out my script on camera.

Jim did an incredible job putting together contrasting costumes for “younger” and “older” Jims, and really got into the two roles.  Who knew he could scream like that?  Janet nailed her voice over from the beginning and needed – by far – the least amount of takes.  Thank you, Jim and Janet!

Charlie and Jeannie not only allowed us to use their garage, wood shop and lanai as sets, but they too acted in the film.  Charlie was instrumental in helping us shape critical aspects of the script (namely time travel) and then put together his fantastic, “Doc” outfit.  Jeannie was perfect in the last scene and reaction to more Charlies invading her life, “Oh no, just no!”  Thank you, Charlie and Jeannie!

While he never appears on camera, Roy Garland was our sound guy and boom pole operator during the shoot.  The result is a very clear voice track throughout the film.  Roy also added a degree of levity during filming.  He’s funny like that.  Thank you, Roy!

And finally, Back to the Truck Camper would not have been possible without Angela.  From helping with the concept and script, to giving the actors their lines moments before the camera rolled, to keeping us on task and on schedule, Angela made it happen.

Angela also read and played the rolls of Current and Future Jim so Jim could have someone to act with.  Thank you, Angela!  And sorry about the whole “Two Jims” split screen freak out.  I’m better now.

Would you believe there are three more videos already in production?  That’s no bull, except it is.  And yes, that’s a hint.  What will we do next?  If you can hang on, you’ll know in 8-seconds.

For more fun entertainment, visit our YouTube channel and watch all of our Truck Camper Magazine videos.

Home » Videos » Back To The Truck Camper