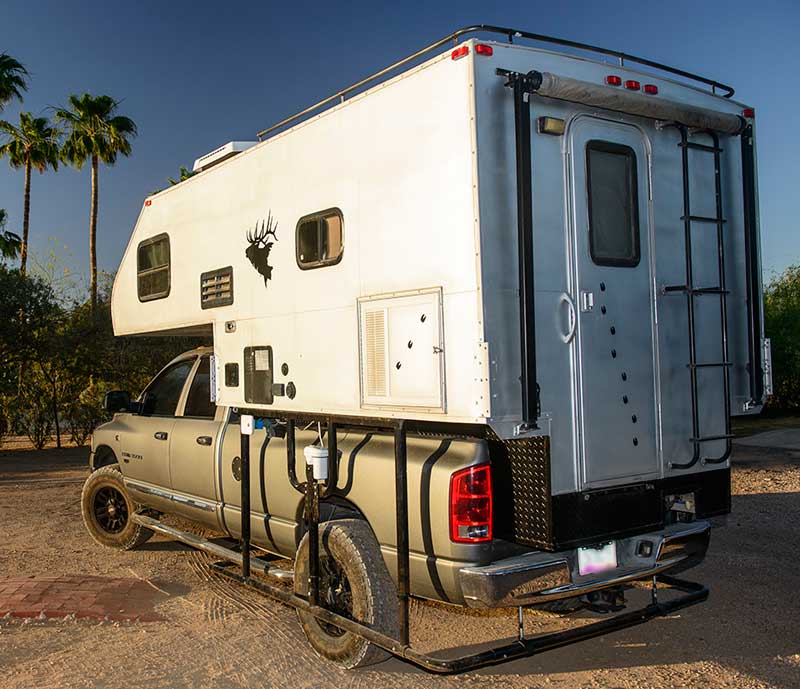 When we used to tow a travel trailer, we liked the convenience of being able to easily unhook and leave behind the trailer at our campsite.  That freed up our tow vehicle to go exploring or to go into town for grocery shopping.

Since we boondock the majority of the time, we usually find ourselves on a surface that is not level and not hardened – like dirt, sand, or grass.  With corner jacks, we didn’t feel comfortable unloading our camper on these soft surfaces. What if it were to rain and one of the four corner jacks sank into the ground? 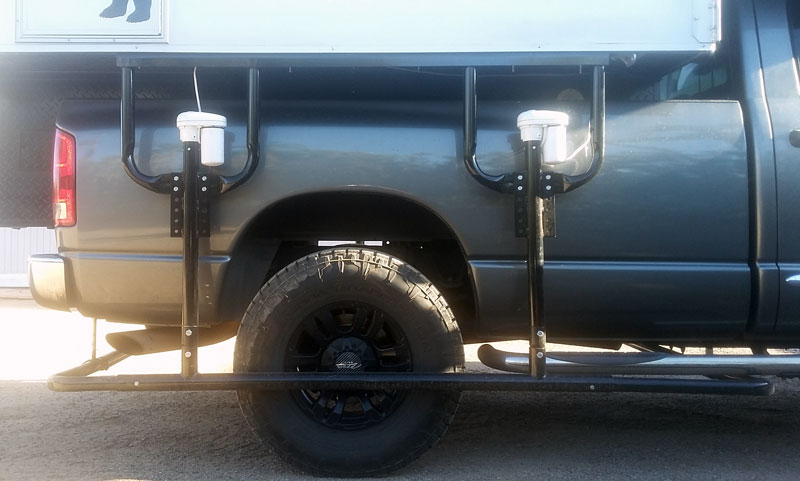 Above the Stable-Lift is in the driving position, and below it is lowered to the ground. 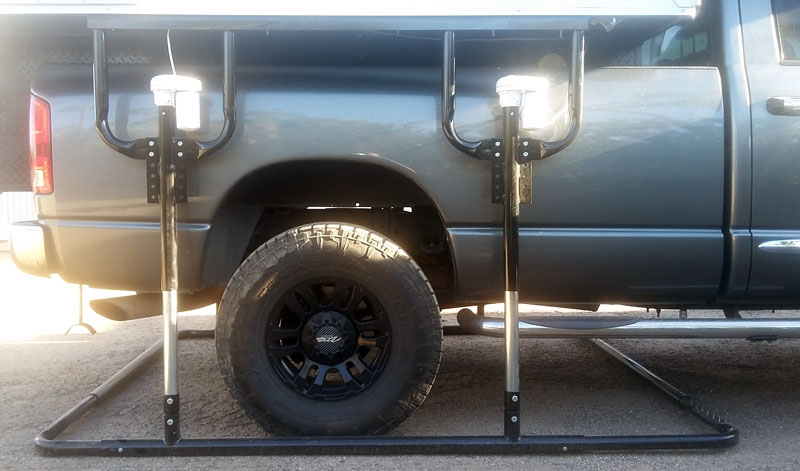 Our camper originally came with four mechanical Rieco-Titan jacks.  For us, it was no fun loading and unloading the camper with mechanical jacks.

We looked into upgrading the jacks to electric jacks.  Rieco-Titan charges a little over $1,300 to turn the mechanical jacks into electrical jacks.  We figured we would need to find someone to install this for us at an extra expense.

The Stable-Lift three-jack system (at $2,895 plus installation and shipping) was more expensive than converting our Rieco-Titan jacks to electric.  However, we didn’t like loading and unloading with mechanical jacks, especially on soft or non-level ground.  So, for the ease of unloading/loading and piece of mind, we spent the extra money. 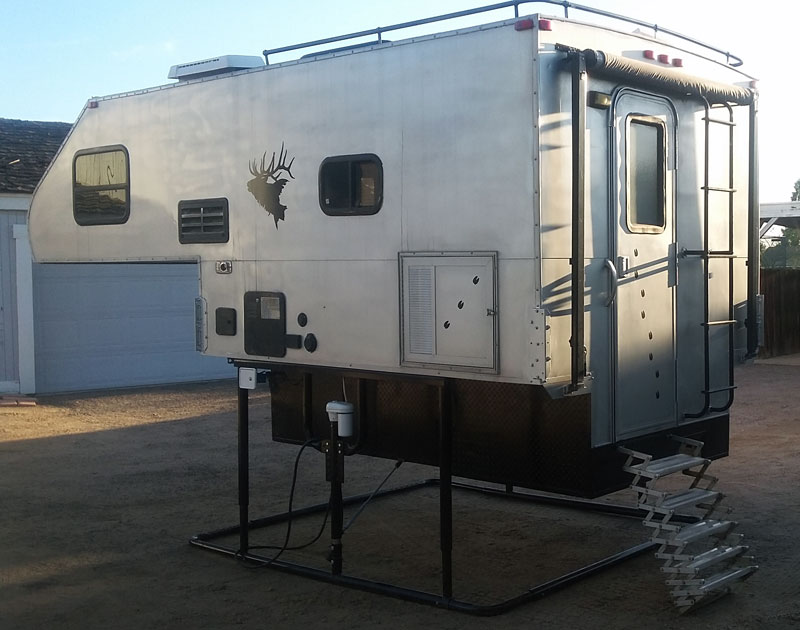 We wanted a system that would allow us to easily and safely take off the camper on almost any surface without the fear of the jacks sinking or bending while camping in the middle of nowhere.  Stable-Lift was the only product that checked all the boxes.

We ordered the three-jack system.  Even though our camper is only 2,000 pounds, we wanted to have the most heavy duty system they offered. The three-jack system also allows for easier leveling left to right as well as front to back.

We had the Stable-Lift system shipped to us.  We hired a local mobile RV repair company in the Phoenix area to handle the installation.  I took them about seven hours to complete the install.

During the installation, we learned that the Stable-Lift wasn’t high enough to clear the truck bed.  Upon contacting Stable-Lift, they worked with us and shipped extension brackets free of charge.  We were able to install the brackets ourselves.

We kept the attachment brackets in place on the camper, but removed the original corner jacks.  Since we had upgraded to a better truck while the Stable-Lift was being installed, we didn’t go through the trouble and expense of installing the old tie-downs on the new truck.  Once you have Stable-Lift installed, I see no reason to keep the old systems in place.

Mont Peters, President of Stable-Lift, helped us though the process of installing and using the system, but ideally there would have been an experienced installer near us. It would have been more comforting having someone with experience with us when we were first loading and unloading with the system.

Since the Stable-Lift system is connected using bars on the ground as opposed the four individual traditional corner jacks, you need to pay attention to the general level of the ground.  For example, a section of the Stable-Lift bars could come down on a big rock. That’s to be avoided.

That said, now we don’t hesitate to load or unload the camper.  The Stable-Lift system feels more heavy duty and reliable as compared to corner jacks.  We feel much more comfortable with the camper standing high in the air with the legs extended.

While the camper is off the truck, the camper is rock solid once you add the three stabilizer bars; which are part of the Stable-Lift system. 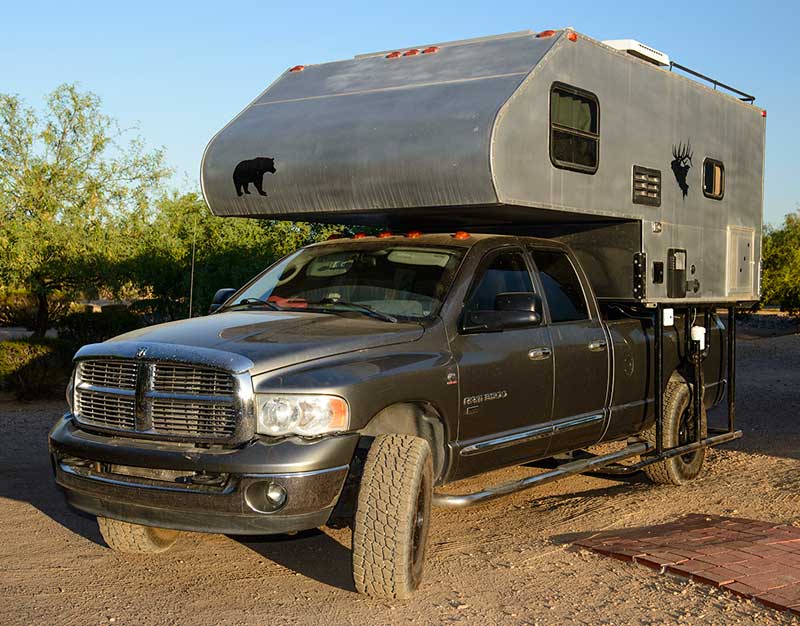 I’d estimate it takes about five minutes to unload.  You simply press the three buttons (we have the 3-jack system) and keep an eye on the leveling (left to right and front to back).  Per the manufacturer, it’s not necessary to keep the camper as level as when you have traditional corner jacks. It’s still recommended to keep the front a little higher than the back.

As usual, loading takes a little longer as it can take a while (depending on your personal experience) to drive the truck back under the camper.

Previously, our front corner jacks sometimes bent, especially with a full water tank and all the weight pushing at the front.  No such thing with the Stable-Lift: there are three jacks plus two extra bars; all heavy-duty and probably overkill for our camper.

We are hoping and planning to take off on another long road trip soon.  We got spoiled during our long road trip from May 2013 through December 2014, so we cannot wait to hit the road long term again. In the meantime, every weekend we head into the mountains to escape the dreadful Phoenix summer heat.