This week’s Question of the Week was, “What’s the most awesome standard parking space you’ve ever parked your truck camper in?” 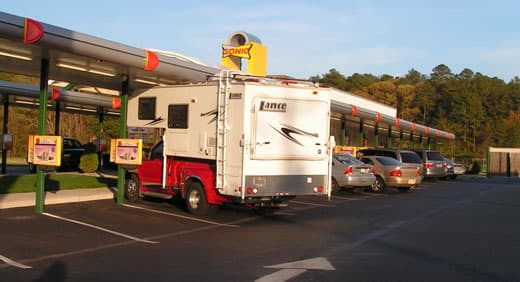 “It was our first day on the way back to Oregon with our new camper after having picked it up in San Diego.  My wife was navigating and suddenly I realized (too late) that she’d directed me onto the Santa Barbara Pier.  I said, “What are you doing?  We can’t park on the pier with the camper”.  But, actually, you can.  It fit just fine.  That’s something you can’t do with a trailer or a 34′ motor home.” – Vince Kurpan, 2012 Ford F150, 2007 Panther Sierra 7′

“We mostly camp off season.  Too bad they had closed the regular campground at Glacier National Park.  Boo hoo!  We had to camp in the picnic area right on the edge of the lake, looking at the reflection of the snowy peaks on the water.  Our rig fit right in the parking spot.  It was cold sitting at the picnic table at the water’s edge, but some friendly Canadians shared their Laphroig and we shared our chili and stories.” – Sharon Day, 2007 Dodge Ram 3500, 2007 Arctic Fox 811 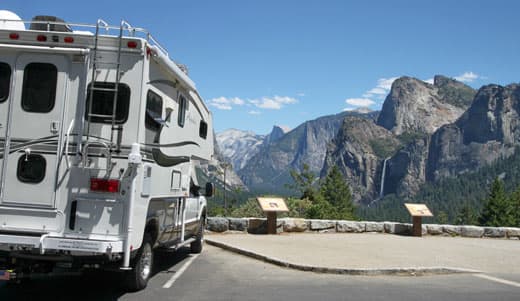 “We were driving in to Yosemite valley and came across a small parking lot with about twelve spaces.  This was the proverbial lot with a view and our truck camper fit beautifully.” – Rex Carroll, 2004 Ford F350, 2006 Alpenlite 950 Cheyenne

“Our best parking spot with our 1999 Ford F150 and 1985 8.5 American Pilgrim hard side truck camper was downtown New Orleans in a $5 all day parking lot along Decatur Street.  We spent the day touring the old part of town, took a carriage ride, just had a ball.  This was a pay lot.  When we went to leave the lot attendant wanted to charge me for an oversized vehicle (three times the amount).  After some explaining that I didn’t take up any more room than the other pickup trucks in the lot the attendant agreed and we where charged the same fee as a car.  It sure is nice fitting in with the norm.” – Mike and Nancy Pohl, 1999 Ford F150, 1985 American Pilgrim 8.5 hard side

“We were in Mesa, Arizona and wanted to see “The Avengers”.  So we pulled into the nearest movie theater parking lot that our GPS could find.  We got permission from the manager to overnight and it was perfect!  Large parking lot, beautiful area, lots of shade trees to park under, beautiful sunset, and walking distance to our movie.  We ended up getting tickets for the midnight showing and after it ended, around 3am, we went home to our camper, sat back and watched all the people parade out of the parking lot.  The next morning, our alarm clock was the sound of a helicopter hovering above the area (not sure why).  We loved the movie and loved the area, but it was time to move on to our next destination.” – Cindy Gilbert, 2011 GMC 3500, 2011 Northern Lite 10-2000RR 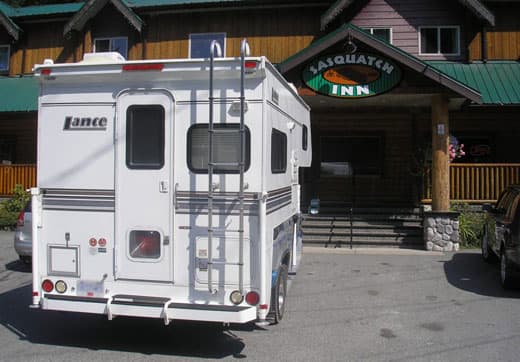 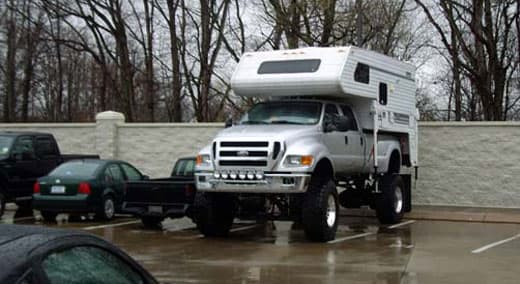 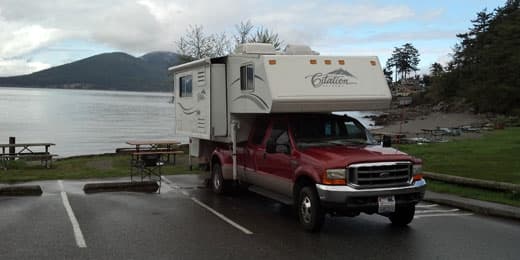 “The Saturday of the spring rally, we went exploiting and checking out boat launches.  We parked here for lunch and some rest and relaxation.” – Gary Birenkott, 1999 Ford F-350, 2005 Citation Supreme 1050

“Although I was raised in the South, my first job was in NYC, New York for two years.  So I learned my way around.  Years later I took my four young kids to visit the big town during a weekend.  In the early afternoon we were hungry and saw a Jewish deli on Madison Avenue, so I parked there on the side of the road.  I purchased several sandwiches and we sat in the quiet peaceful setting of the camper on Madison Avenue.  We enjoyed our lunch while we looked out the window at the fast paced taxis and cars speeding by us in Manhattan.” – Fred Patterson, 2013 Ford F350, 1977 Mobil Traveler 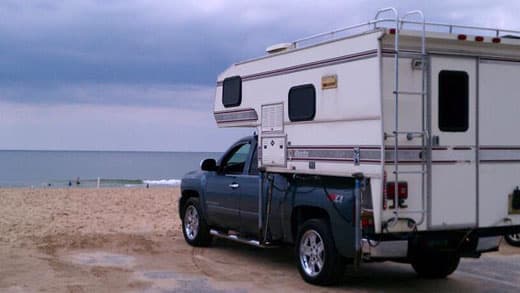 “On Wednesday of this week we were parked at a turn-off in Chaco Culture National Historic Park.  I took this picture of our rig with Pueblo Bonito behind us.  Anne and Joe Brown in their Chalet DS116 were also at Chaco enjoying the ancient ruins.” – Angela White, 2013 Chevy Silverado 3500, 2013 Lance 855S

Home » Question Of The Week » Can You Park Your Camper Like This?