Truck Camper Magazine polled its readers for SiriusXM solutions for RAM trucks.  The following responses are sorted by year starting with the most recent trucks.

“I made the purchase of the camper and drove about four hours to get back home.  The radio and navigation feature worked just fine, but this was because I was heading west and then south which allowed for the line of sight (LOS) between the truck antenna and satellite to be clear and unobstructed.

When I got home, I started having problems.  Facing south and west were not a problem, but facing east and north the LOS became obstructed by the cabover portion of the camper.

After several weeks of consulting with the folks at both SiriusXM and uConnect, I came up with infotainment.com.  Infotainment.com manufactures extended puck style antennas that’ll plug into the back of the radio.  The hard part is routing the antenna through the firewall to the front of the truck.” – Terry Long, 2018 RAM 2500, 2017 Palomino HS-8801 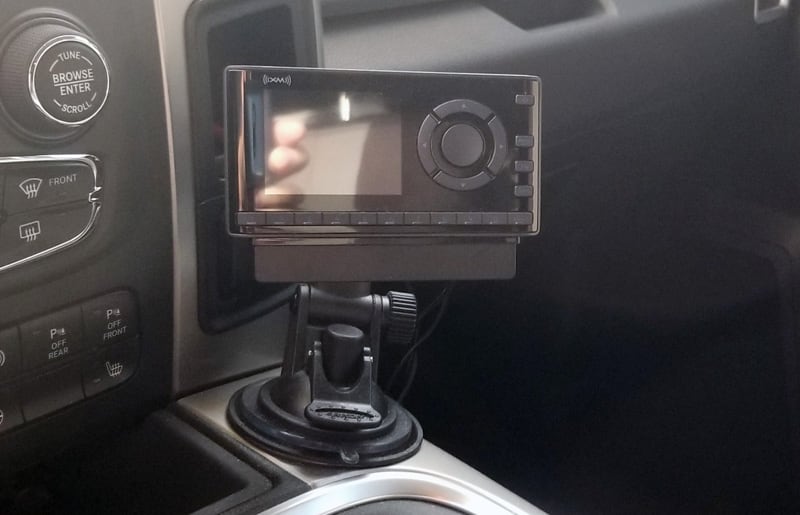 “I bought a SiriusXM mobile radio kit (shown above).  It comes with a magnet-based low-profile antenna with a long lead wire.  I position the antenna on the front of the hood with the wire threaded under the hood down the right side into the cab (see below). 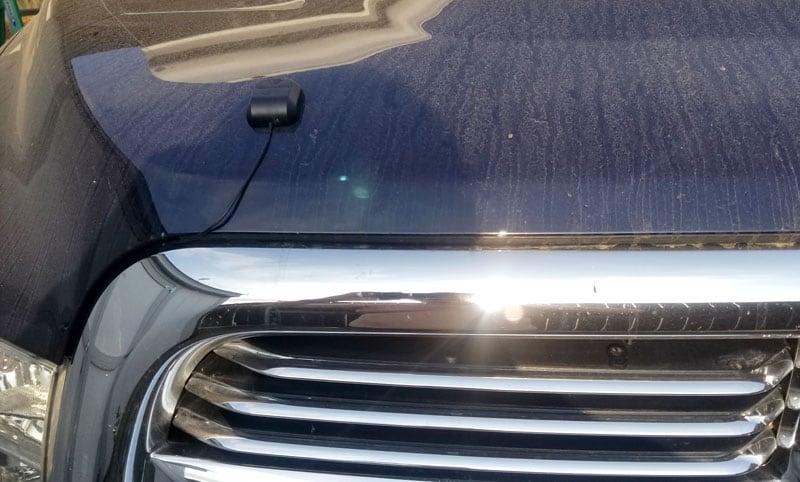 I have driven in strong head winds and the antenna did not move.  Just remember to leave a little slack in the antenna lead so you can raise you hood without having to remove it all the time.

The other benefit to the mobile kit is you can add a car kit and move you radio from vehicle to vehicle.  You can have SiriusXM in all your vehicles and only pay for one account.” – Donald Henderson, 2017 RAM 3500, 2015 Lance 1172 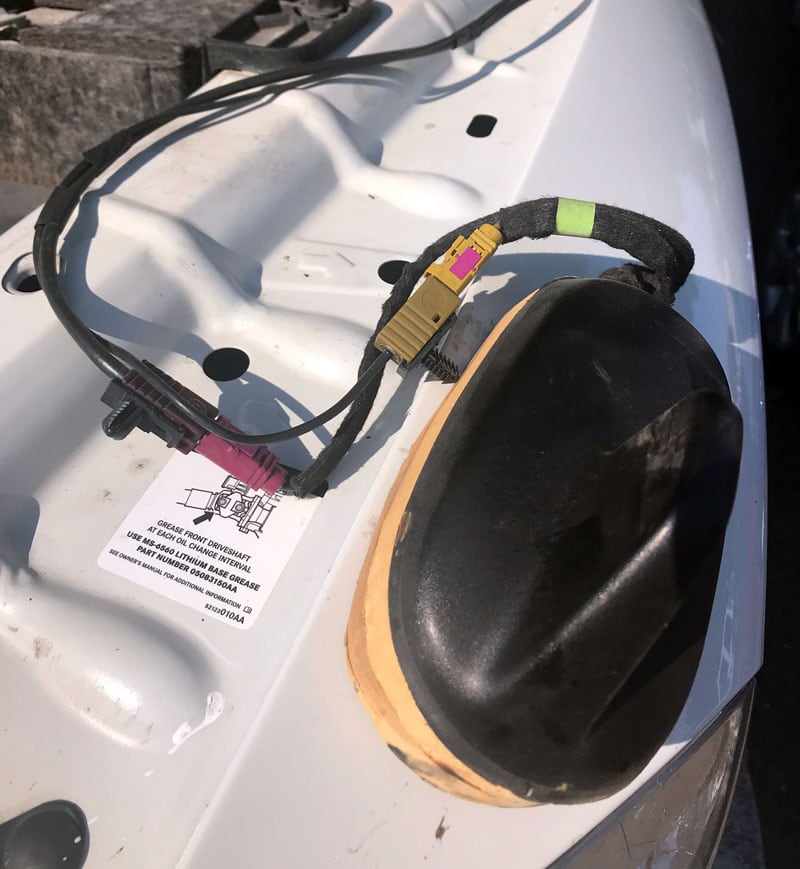 “My solution was to put a temporary antenna attached magnetically to my hood when needed.  I purchased the following Mopar parts: (1) satellite uConnect radio antenna base and cable, (2) uConnect radio cables, and (3) uConnect access jumper cable.

I used YouTube instructions to remove my uConnect radio.  I unplugged the antenna wires from the back of my radio (there are two of them).  I plugged in the wires from my original antenna into one of the radio cables I purchased. 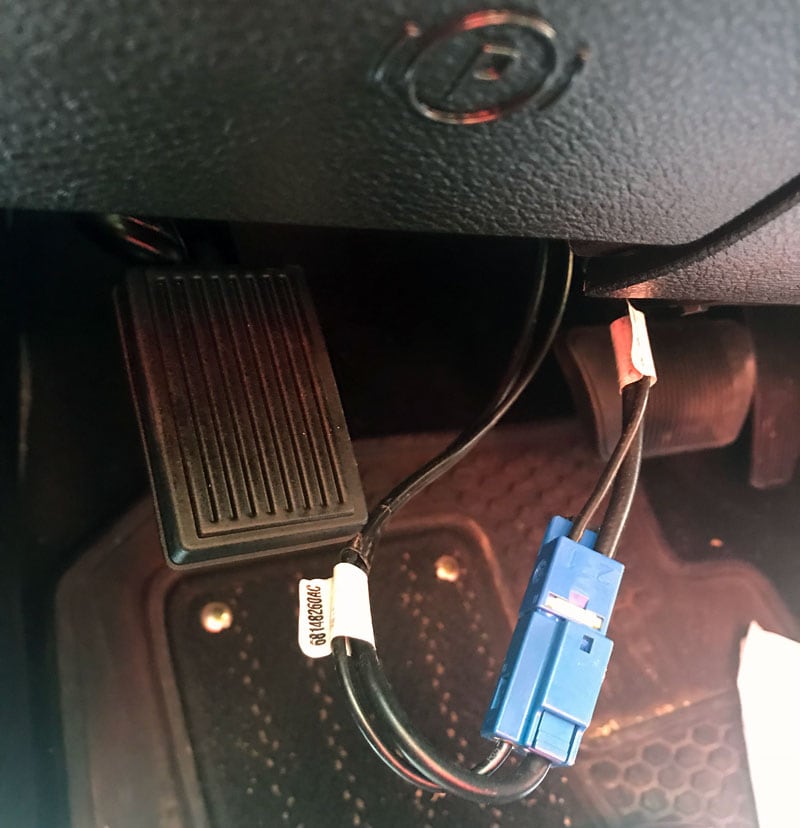 Then, I plugged in the jumper cable to the back of the radio.  I ran these two cables under the dash ending near the brake release. 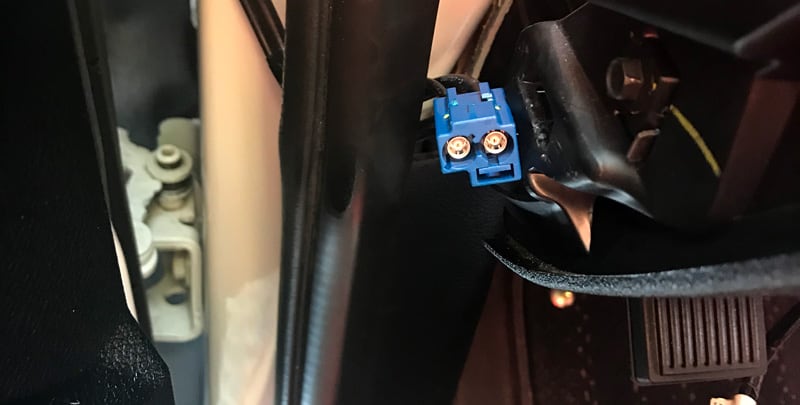 I attached my purchased antenna to a wood base with magnets (see below).  I attached the other radio cable to it and ran it under the hood to the dash. 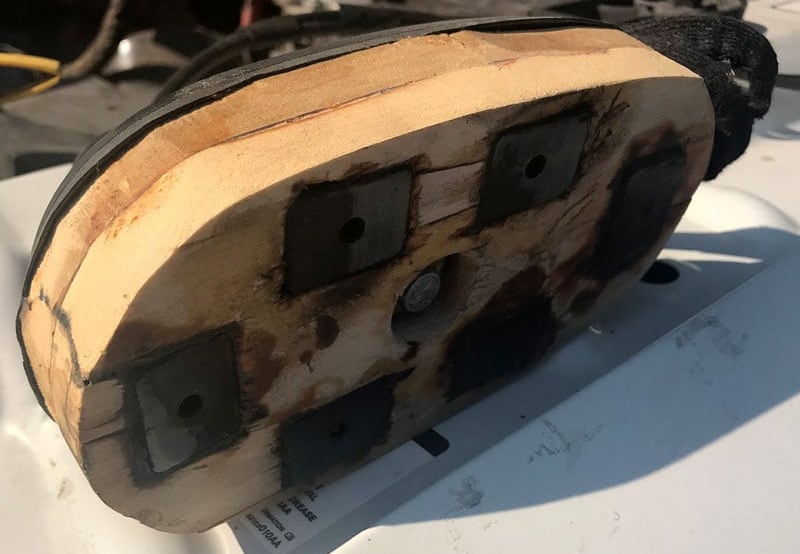 “I had a 2011 Chevy that I fixed the blocked SiriusXM antenna problem using your very helpful article, Blocked Sirius XM Radio Antenna Quick Fix.  I took it off the truck when I traded it in this spring on a 2015 RAM 2500.  I thought I could easily put the antenna on the RAM just as I had on the Chevy, but I could not find that same box that was behind the glove box on the Chevy. 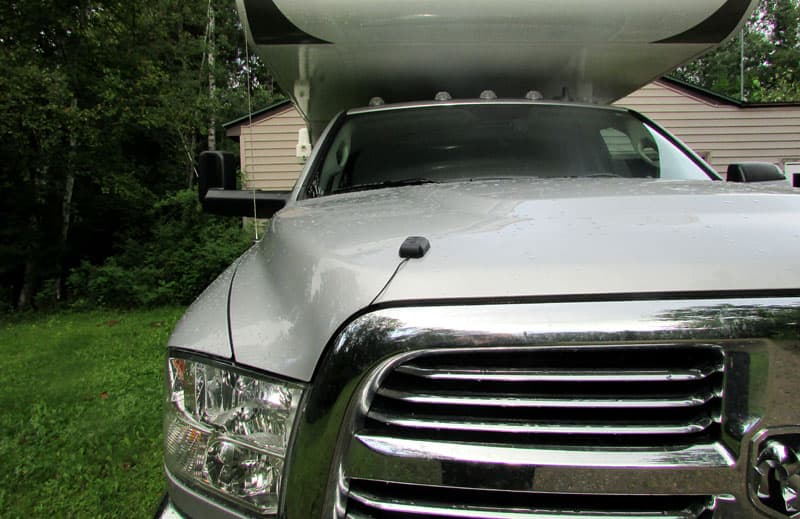 I took the antenna and Fakra adapter to my RAM dealer as I did not want to tear my truck apart looking for the connection.  When they were done, they had the antenna mounted exactly as shown in your picture.

On the way home I noticed the signal cutting in and out.  I moved the antenna more on top of the hood and have had no more problems.  I do not get the “Check Antenna” message.  My truck does not have GPS navigation though.” – Terry Gfeller, 2015 RAM 2500, 2013 Lance 865

“My truck does not have NAV or even cell (I have the uConnect 5).  For me, it was as easy as pulling the A pillar on passenger’s side.  There is a connector in there for coax cable I took apart.  I bought an 18-inch extension cable.  The SiriusXM stuff plugs right into this factory cable after you take the plastic outer connector cover off.

I ran this extension down behind the glove box.  I also routed the radio end from the A pillar location to this same place behind glove box.  Then I ran that same antenna you bought from the center of the hood (really it works best in center of the hood) and then behind the dash.  I came in through passenger’s side fender well, into the door opening, through a piece of rubber in the door jam, and into that area where your feet kick the panel on passenger’s side.  I also ran this antenna end up to behind the glove box.

When I load the truck camper in the summer, I put the puck on the middle of the hood, drop the carpet below the glove box, and plug the hood antenna into the cable that goes to radio (behind the glove box).

When I unload the camper in the winter, I unplug the hood puck and hide it under the hood.  Then I plug the extension cable from the original radio into the cable that goes to the radio (behind the glove box).

The problem with some of the newer RAM trucks is that the antenna might have two leads; one for cell, and one for NAV/SAT.  Trying to plug the SiriusXM puck antenna into the combo NAV/SAT cable will not work.

I only have one cable, and that is for SAT only.  I do see a part number listed on one of those drawings for what they call the puck antenna, which is what they are calling SDARS.  On one of those pages it shows the 05064973AB puck antenna back on top of cab, all the way in back of driver’s side.  My 2015 is up by the clearance lights.

To be honest, in some areas I have found my Sirius magnetic mount antenna on the center hood still is not that good, so I will stream music from my cell phone direct into my radio over Bluetooth.  You can stream from Amazon prime for free if you’re a member and you have even more choices that SiriusXM radio.” – Will Rosenberry, 2015 RAM 3500, 2015 Wolf Creek 840 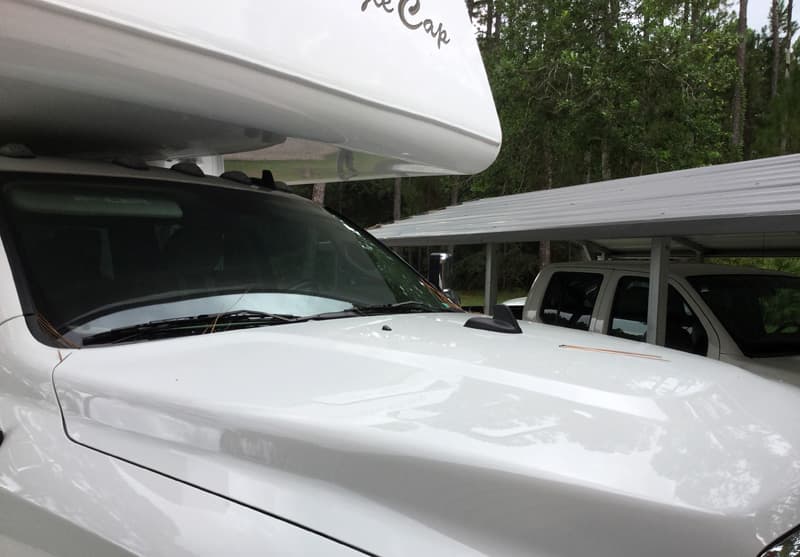 “I had the same problem.  With my 2012 RAM 3500, I bought a shark fin antenna from RAM and fastened it on the hood with a magnet using Gorilla glue to the magnet and antenna.

“We purchased a SiriusXM radio that plugs into the 12-volt power port and uses the radio tuned to a free channel for the truck stereo.  Then I ran the magnetic antenna to the hood.   The only annoyance is having to occasionally find another free FM channel as you run down the road.  When driving south or southwest we get reception from the installed roof antenna.” – Steve Wright, 2015 RAM 3500, 2015 Lance 1172

“I purchased a factory antenna along with the longest cable extension and put on a hood ornament.  Using a cardboard template from under the hood I marked it and made the hole. 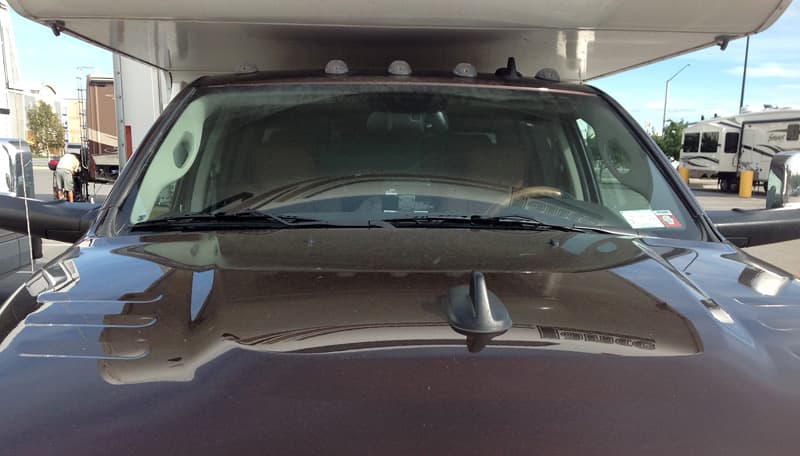 “RAM has an antenna relocation kit for the SiriusXM antenna just for this purpose.  A friend did the relocation with his truck camper and it worked.  He bought an antenna to leave on the camper so he didn’t have to disturb his RAM’s cab mounted antenna.  Here’s a link: http://www.rambodybuilder.com/2014/docs/cc/dddpsrca.pdf” – James Bronson, 2014 RAM 3500 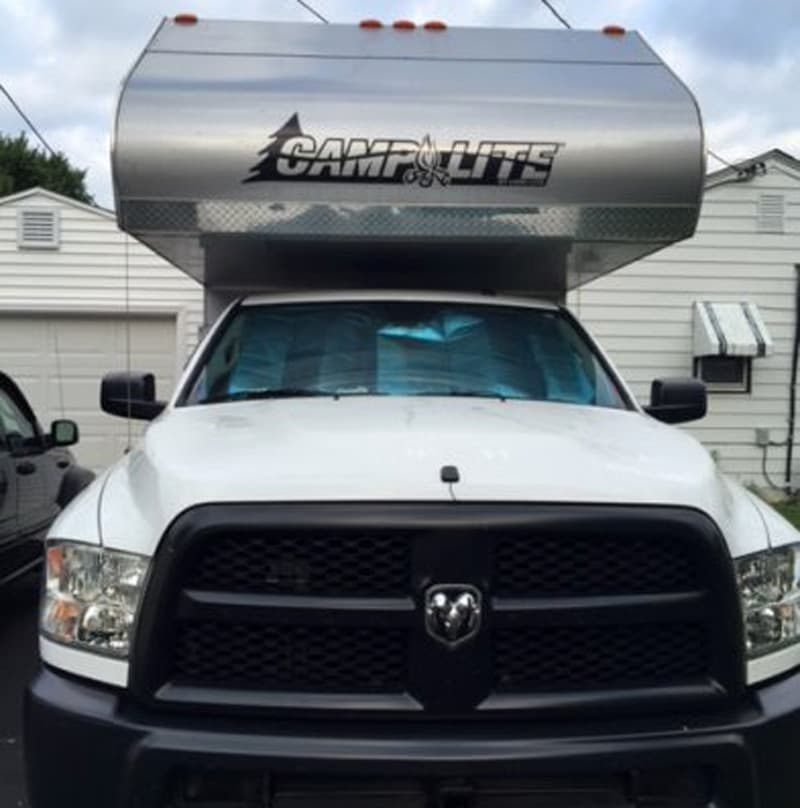 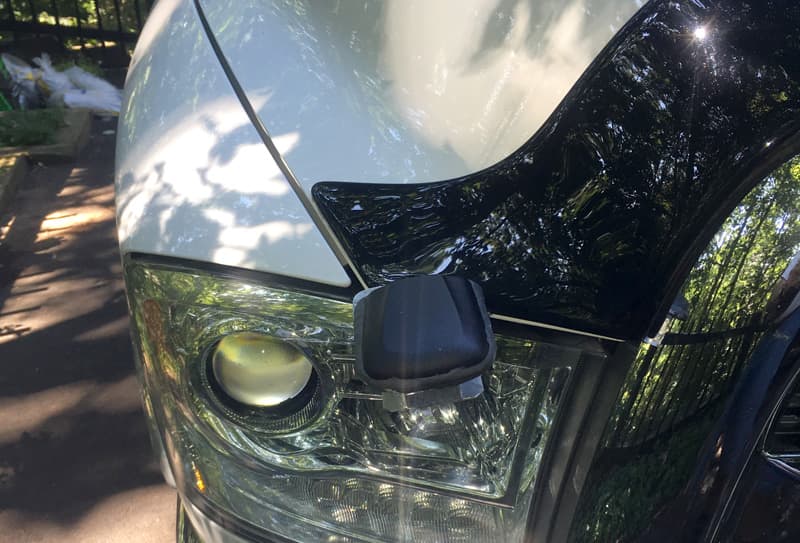 “I found a Sirius Dual Antenna Kit from OEMautopartsco.com.  It’s an OEM Chrysler product for Jeep/Dodge vehicles for the radio and GPS.  I had to access the back of the radio to remove the antenna connection and plug in the new antenna.  It’s the same connector and color.

The only issue is that the unit is not a magnetic mount.  It has a nut and bolt, so I had to fabricate a mount and attach it to the front of the truck.

The GPS and radio work perfectly now.  I had a little concern about the mount protruding from the front of the truck, but it hasn’t been a problem.  I don’t know if this antenna connection will work on the other truck brands.” – Richard Sassone, 2013 RAM 2500, 2011 Northern Lite 8-11 Classic 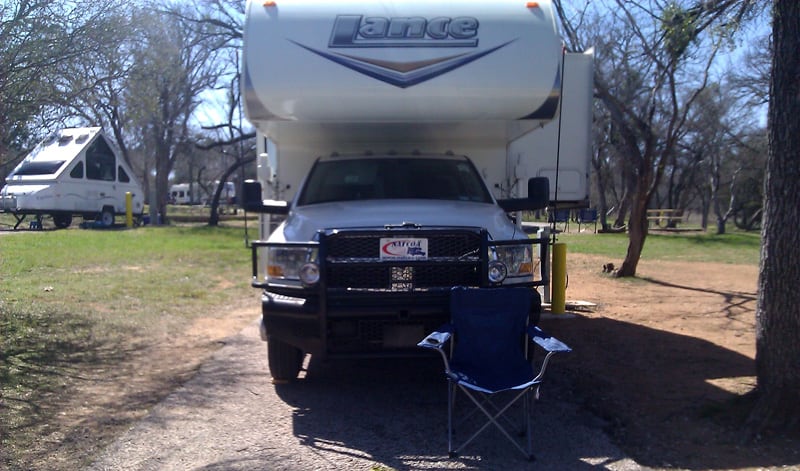 “We are on our fourth truck camper. With our first I learned the hard way that the camper makes a better bridge than a clear sky to get the satellite signal.

On our rig I have a ranch hand bumper. It’s a big and massive and has paid for itself three times over. I clamped a small piece of 2×6 metal onto the bumper.

When we bought our 3500 Ram I went down to the dealer looking for an antenna. A technician was in there and had just replaced an antenna on a Jeep that the owner didn’t want, so he gave it to me. I used that on my Ram 3500.

I ran the wire down the bumper and under the grill. Then it went up behind the head light, the radiator, and behind the battery and into the cab. The rest was bundled up and stuffed out of the way away. It works just great no matter which direction we travel. The picture was taken at the Texas Rally put on by Princess Craft back in 2013.” – James Tedford, 2012 Ram 3500, 2017 Adventure 116DS 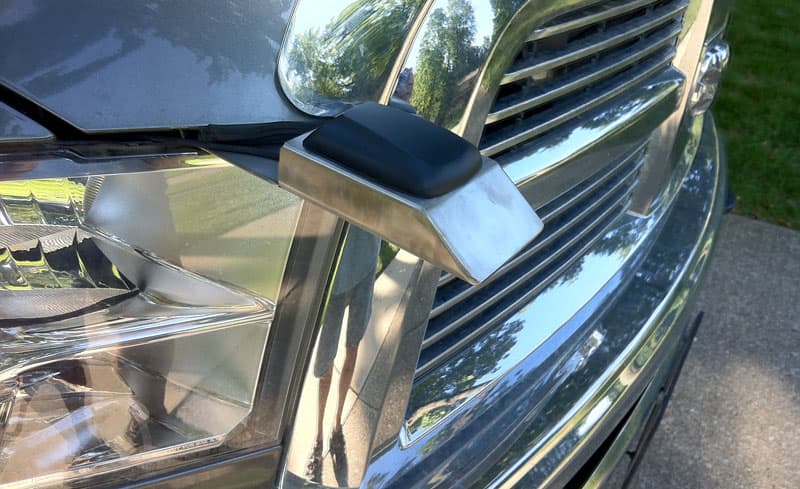 “A friend of mine made me a mount that I installed under the front edge of the hood over the passenger side headlight.   I then mounted a factory RAM rooftop antenna in the mount, and ran the cable back to the passenger’s side kick panel where I unplugged the rooftop antenna and plugged in the new front mount antenna.” – Ken Colvin, 2011 RAM 3500, 2011 Real Lite HS1810 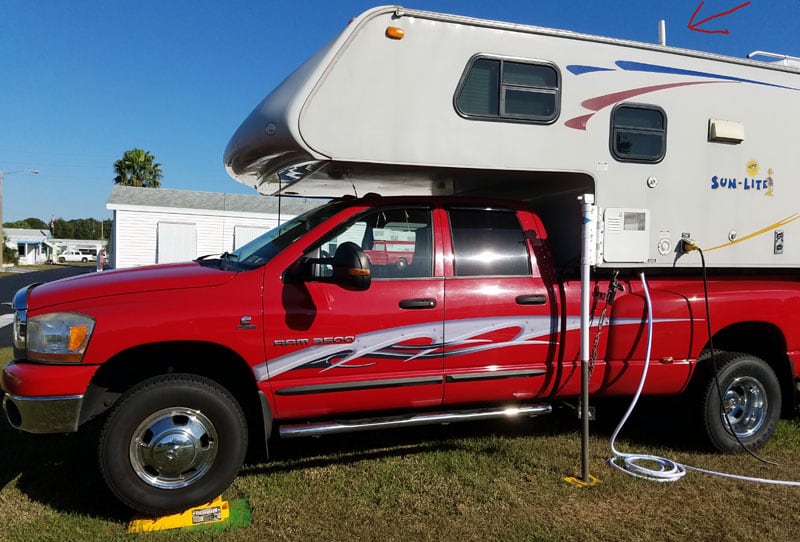 “I mounted a marine SiriusXM antenna on top of my camper.  Using the marine mount, the cable goes through the center of the mount.  You can use Dicor sealant around the mount and make it waterproof.

I then ran the cable through the cabinets of the camper.  I also purchased a DC pass splitter in the frequency range for SiriusXM radio.  I installed it inside the camper by the camper radio.  That way I can put a portable SiriusXM tuner in the camper.

I ran a cable from the radio out of the back of the truck cab.  After loading the camper I connect the two cables and never lose SiriusXM radio signal.” – Frank Mertes, 2006 RAM 3500, 2008 Sunlite 955SD

“I have an Onyx SiriusXM radio in our truck.  I put the antenna on left front fender.  The Onyx control head slips in and out of a car kit so I move it between vehicles and my shop.  I was able to find additional car and home kits on eBay pretty cheap.

SiriusXM Renewal Tip: I recently renewed my SiriusXM subscription.  I was able to negotiate a lower rate and upgrade that allows me to also listen to SiriusXM radio via the internet.  The first couple of Sirius reps I spoke to said they could not reduce subscription price and no upgrade was available.  I left the call saying that I was still thinking about renewing.  On the third call, the rep was eager to keep me as customer, so they dropped the subscription price and gave me the upgrade.” – Rich McGuire, 2006 RAM 3500, 2008 Bigfoot 3000-series