Nearly 1,100 truck camper owners completed this week’s Poll on truck camper awnings.  The results are very clear.  We love our awnings, and want more and better awnings on our campers.

The  majority of truck campers built and sold in the United States and Canada are shipped from the factory with awnings.  The truck campers that are not shipped with awnings usually get an awning (or two) installed at the dealer level during or after purchase.

We were actually surprised at how many fellow campers stated that they did not have a side or rear awning – over 17-percent.  Keep in mind this number may be skewed by the subject of the poll itself.  People who don’t have or care about awnings likely skipped it.

Rear and passenger side awnings are clearly the most popular.  Unless you purchase a side entry unit, the rear awnings shade and protect the rear door from the elements.

Awnings are predominantly located on the passenger’s side because that’s the side with the picnic table and grill at most campsites.  So far everything makes perfect sense.

Only 8.2-percent say they do not use their side awning often.  I wonder if that’s partially related to the number of folks who have their awning on the driver’s side (7.4-percent).

For the industry, this is a clear sign that passenger’s side and rear awnings are (a) extremely popular, (b) get a lot of use, and (c) should probably be considered standard equipment on at least the higher-end units. 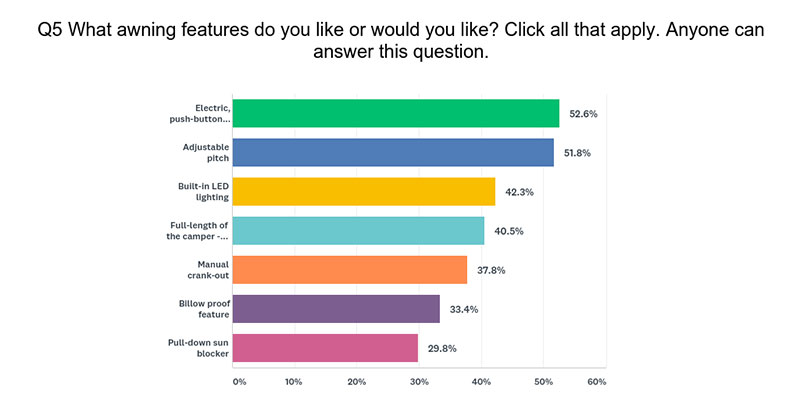 More than half of the respondents want the electronic, push-button operation and adjustable pitch.  Both features should be firmly on the industry’s radar screen for current and future truck campers.

After that, things get less certain with between 30 and 40-percent of folks wanting the additional features.  The electronic push-button awnings mostly come with built-in LED lighting.  Additionally, the side awnings are increasingly full-length.

Perhaps the real take away here is for the manufacturers to focus on high-end electric awnings with the most built-in features.  Evidently, that’s what truck campers want.

Ironically, we are in this second camp.  No awnings and happy.  This is why it’s so important to hold polls and listen objectively to the answers.

We received a number of emails this week from readers who wanted to express additional opinions about awnings.  Who knew we could be so passionate about this subject?  We will conduct a broader awning poll in the future so you can express your opinion in words, not just poll results.