This week’s Question of the Week was, “Have you done anything to maintain, repair, or replace the exterior vinyl graphics on your truck camper?* 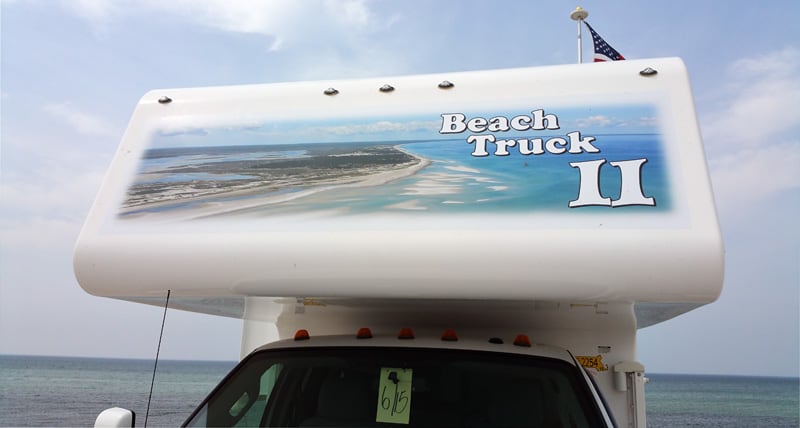 “First, I didn’t really care for the logo. That played more of a role than fading did. I removed all of the camper logos.

A fellow truck camper who also happens to fly powered paragliders as a hobby, took photos of my rig over Sandy Neck Beach.

I re-sized his aerial photos in Photoshop and added some text. Then I took them to my favorite sign shop and had them made into vinyl overlays. 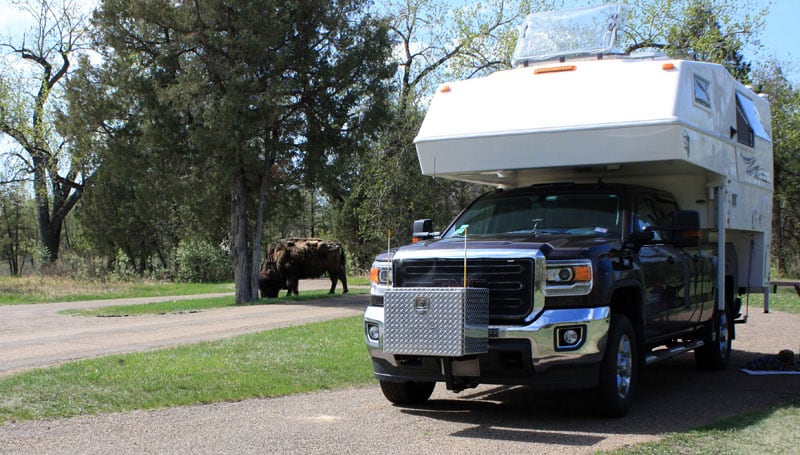 “Two years ago, I removed front vinyl graphics because they were faded and spitting. We used a heat gun and slowly heated and peeled them off. It’s easier to get the bugs off without the graphics.” – Gary Goyette, 2016 GMC 3500HD, 2011 Northern Lite 8-11 Q SE 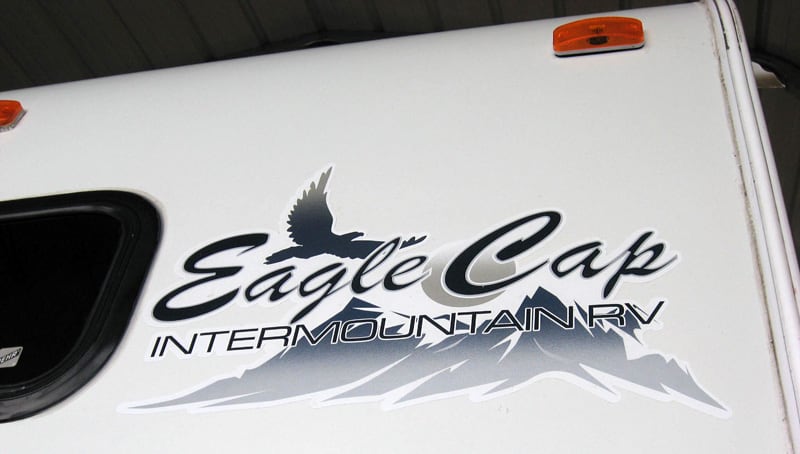 “My camper is now fourteen years old and the graphics are holding up well. I do park it under a canopy so it’s not exposed to the elements except when we’re on the road.

I wax my camper twice a year. The hardest section to keep clean is the front cap with the onslaught of bugs while traveling. I’ll off-load the camper in July (and again in November) and lower it to reach the front cap easier. 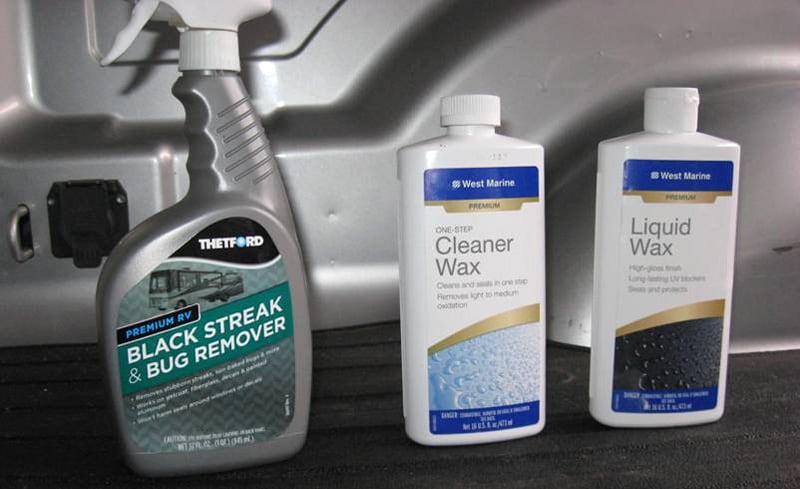 Then I’ll use a power buffer to finish it. I’ve also used these products on my fiberglass sail boat. So far it’s working well to maintain the Eagle Cap and the graphics are looking good.” – Roger Odahl, 2008 Dodge Ram 3500, 2004 Eagle Cap 950 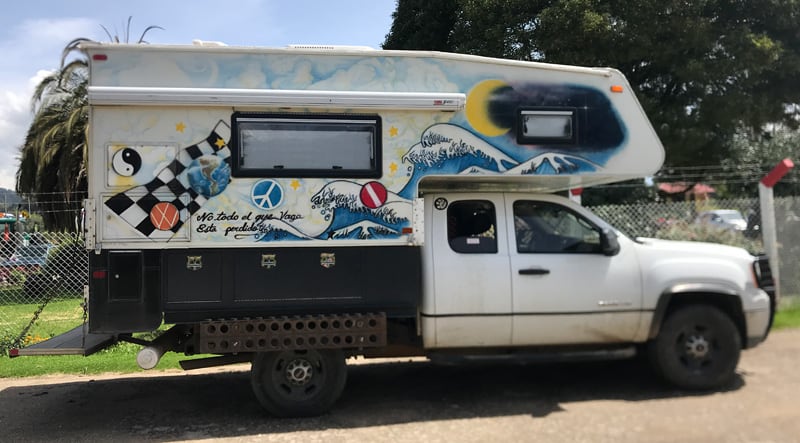 “We removed the original stickers. This took a lot of work with a blow dryer, GooGone and patience. They did leave shadows behind which still show if you look closely. We hired a graffiti artist in Rocky Point, Mexico to paint custom designs on the sides of the camper. He used basic canned Rustoleum sprayed through an airbrush. Then, he clear coated the design. It has been nearly two years. Now it shows the fading and scratches of our journey through Central and South America.” – Mike and Geneva

“Prior to the rig I have now, I had a 2008 Lance 1191. The stripes on that unit began to fade and crack after the ninth year. I debated about having the camper wrapped but the cost was approximately $1,000 more than having it re-striped. So I chose the latter.

The company I used did a great job and I received a lot of compliments. They used a computer to design the stripes and they were able to show me what it was going to look like before the install. I wanted to stay as close to the original design as possible with some enhancement to bring it up to today’s style.

They were able to to accomplish my request very nicely. They also made the stripes a little larger to cover the outline of the old stripes.” – Dennis De Ville, 2018 Ford F350, 2018 Lance 1172

“When we bought our camper new, we also bought an extra set of decals and stored them in a heavy cardboard tube.

After ten years, the nose and right side decals faded and cracked from afternoon sun damage. The left side’s graphics are still in pretty good shape. The fiberglass was also chalky and faded.

We had the nose art replaced at Lance when we replaced the water-damaged nose skin a few months ago. Since then I have applied West Marine Fiberglass Restorer and Wax with a buffer to restore the fiberglass gloss. The fiberglass was returned to very near its factory new gloss.

“We have a 2004 Holiday Rambler Presidential fifth wheel that we wash and wax several times each year. I’m sure there are different grades of vinyl, but our vinyl graphics are still in good shape and show no signs of fading or cracking.

I really think keeping the RVs waxed several times a year is one of the keys. We do the same to our 2017 Arctic Fox truck camper. As we are getting older, we now hire a local RV mobile wash company. For right now, I can still handle washing and waxing our truck camper.” – Angela Klinger, 2018 Dodge Ram 5500, 2017 Arctic Fox 1140 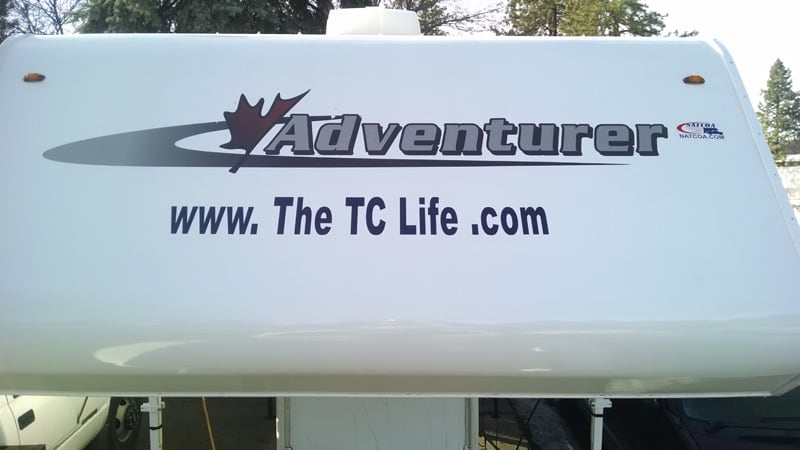 “The only graphic that has had issues on our 2010 camper is on the nose of the camper. Of course that is the one that takes the most abuse, especially with the ice on the nose during winter use.

The Adventurer graphic was replaced at the factory once. I also have my blog website script on the front nose and that has been replaced three times. That script I remove and apply myself.

I have yet to find anything that really protects the front short of using a clear film wrap. Thoughts have crossed my mind of getting a wrap done, but prices have kept that from happening.” – Rich Bain, 2004 Dodge 3500 Dually, 2010 Adventurer 810WS

“I blew the bottom sticker off the front of my camper with a power washer! I think most campers have way too many graphics on them and I didn’t mind it coming off!” – Gary Schiffner, 2017 Chevy 3500, 2018 Lance 850 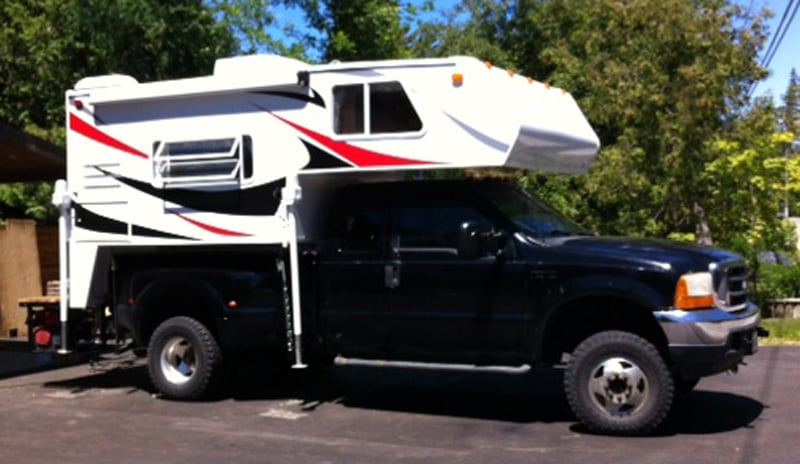 “When we bought our camper it had a little water damage and the siding was slightly delaminated. We were told that it was already fixed so along we went.

By the next spring we realized it was not fixed and had to do something about it. We enjoyed it for that summer with the goal of doing something come fall.

What started as a innocent project morphed into a major one. We took off all the siding and roof to expose bad wood and rot. We let it dry for about a month and installed Alupanel on the sides, and new wood and a roofing membrane up top.

I added new trim pieces and had a good friend install new vinyl graphics. Overall we are very happy with it.” – Bryan Henry, 2001 Ford F350, 2001 Starcraft

“I live in a fifth wheel and use the Lance for road trips. I had the vinyl graphics replaced by a dealership on my 2004 Carriage fifth wheel.

First, Goo Gone and a razor blade was used to remove the old graphics. Then they used a prep solvent that body shops use. When that was completed you could still see the outline of the graphics.

Then they used green 3M masking tape to outline the graphics. New striping material was rolled out, cut to length and then was peeled on the backside as they applied it.

After that they squeegeed it, they green 3M taped the outline, cut the outline with a X-Acto knife, and peeled the both layers of tape and excess vinyl.

“When I ordered my new Lance 1050S in 2014, I ordered it without graphics for this very reason. I did get the Chevrons and the Lance names though. I replaced the 1050S with a 2015 Lance 1181. I felt so fortunate that the owner also ordered it without the graphics. Plus, it had the same colors inside. 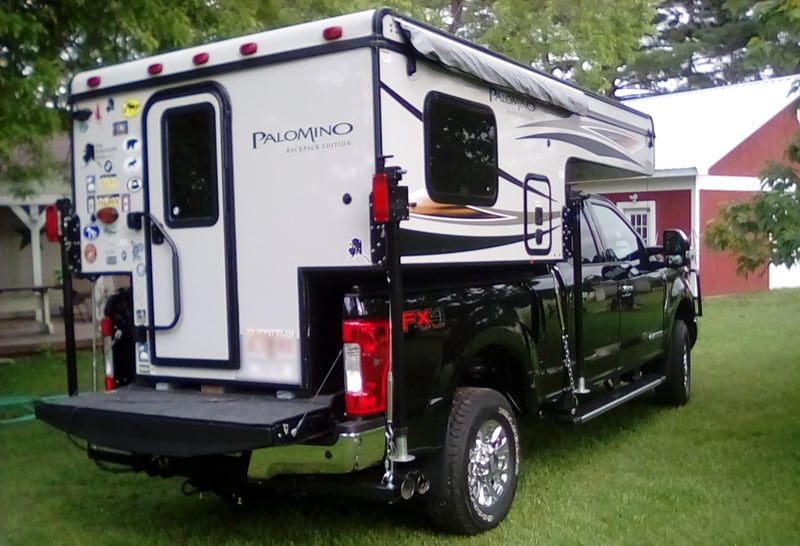 “After a hard and busy summer in Alaska in varied weather, and camping in Northern Michigan, the exterior final graphics are still like brand new requiring absolutely no attention. I do wax the exterior about five times a year. Quality I can live with indeed.” – Bryce Barnes, 2017 Ford F250, 2017 Palomino SS-550

“I have not done anything with the graphics even though they are cracked and faded. I had removed some on the rear of the camper with a heat gun and plastic razor blade, but then found out that the graphic had burned into the fiberglass exterior. I tried buffing and polishing where the graphic was, but you can still see where it was located. So, I’m leaving the rest on.” – Erwin Greven, 2002 Chevrolet Silverado 2500HD, 2002 Lance 921

“I keep my camper inside when not using it in the summer. It has little exposure to the sun and none in the winter because it’s stored inside.

I wax the exterior regularly, which includes the vinyl graphics. It’s been said that waxing the graphics causes streaking and the wax is hard to remove. I haven’t found that to be true at all. I use Turtle Wax paste and it goes on and comes off easily.

I had an issue with one of the graphics on the unit and removed it with a heat gun. A quick call to Palomino in Colon, Michigan got me a replacement in the mail. They have an in-factory service department where you can order parts.” – Daryl Davis, 1997 Ford F350, 2014 Palomino SS-1500

“It’s easy to remove graphics with a heat gun. Be careful not get them too hot or it could burn the vinyl and fiberglass.

I punched a hole in the camper nose about the size of my thumb when unloading the camper a couple of years ago. I repaired the hole, but didn’t want to paint it.

Instead, I covered it with a decal that I made of a fox that came on our patio every morning to sun himself. I took some pictures of him through the glass and screen. It was beautiful.

Having a Arctic Fox camper, I put his picture on front of it to cover up the hole I patched. Then I thought I’d spruce up the old Fox (camper) and had a bigger one made which I put on side.

“To prevent future problems with the graphics, I removed about 75-percent of them within the first three months after purchasing the camper. The first to come off were those on the front cap because that is where most of the issues start.

I peeled up a starting point and heated them up with a hair dryer. They all came off very easily since they were almost brand new.

There is less work involved to maintain the exterior of the camper now. The whole rig looks better going down the road since it is no longer a mobile billboard.” – Jon Hancock, 2015 Ram 3500, 2016 Northern Lite 10-2 EX CD SE

“I would like to see manufacturers cut back on the vinyl graphics. They tend to date a vehicle quickly, and eventually fade and peel, making the whole unit look worn.

That pet peeve aside, I was able to keep the graphics on my 27 year old Lance 480 looking quite decent using a few preventative measures. First, the sun is the greatest enemy, so storing the unit out of the sun is the first line of defense.

Second, I religiously applied UV resistant protectants on the graphics, at least twice a year (more often on the front), even though the camper was stored in a garage.

Finally, I remove bug splatter and road tar as soon as possible after a trip. They will eventually stain the graphics permanently. My new Bigfoot has more graphics than the old Lance, so my work is cut out for me.” – Lance Gouty, 2017 GMC 3500, 2018 Bigfoot 25C10.4

In addition to repairing and maintaining your graphics, please make sure you check your camper’s seals a few times a year.