Truck Camper Magazine polled its readers for SiriusXM solutions for Ford trucks.  The following responses are sorted by year starting with the most recent trucks.

“I mounted the antenna on the hood of the truck in the center near the rear edge of the hood adjacent to the cowl.  This is the same location I used for my 2008 Ford.  The only difference is I had to use double-sided tape because the hood on the 2018 is aluminum and the magnet won’t work.  All my reception problems have been solved.

For the camper, the dealer added a small metal tab to the solar panel and placed the antenna on it.  He then ran the wire down the same opening the HD antenna uses for the television.  I then installed a SiriusXM docking station next to the receiver and plugged it into the auxiliary port on the front of the receiver.

The reception is fine, but it only plays through half of the speakers.  I’m going to revisit this issue and more than likely replace the receiver that came with the camper.” – Dennis De Ville, 2018 Ford F350, 2018 Lance 1172 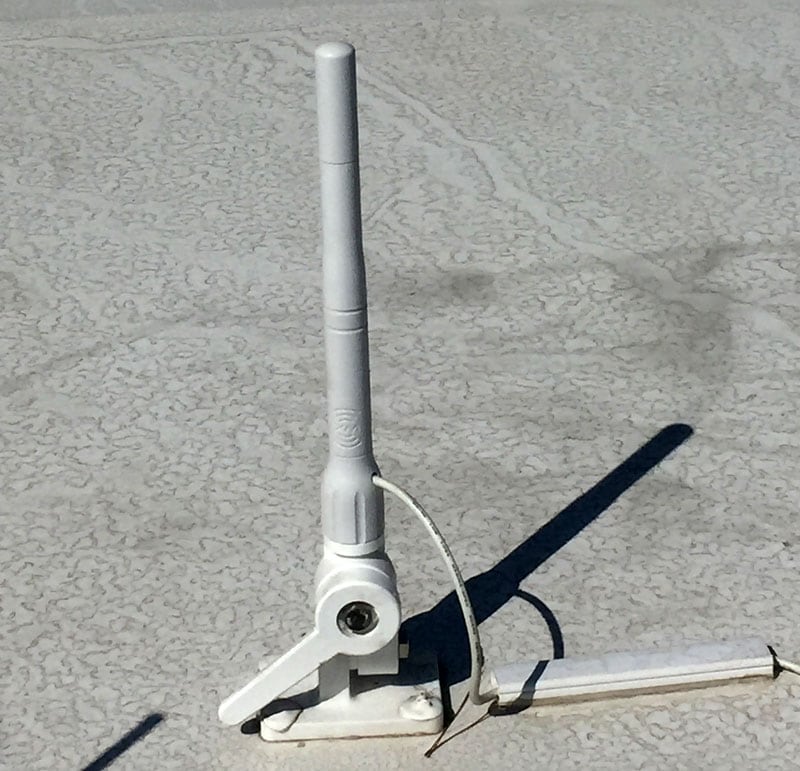 Above: The Sirius XM antenna mounted on the camper roof

“What a pain!  I had to get an external Sirius Marine antenna and mount it on the top of the camper.  I ran the wire down the side in Cordmate II raceway (see below).  It is hard to see but, if you follow just to the right of the awning support bracket, you will see where the raceway goes down and then turns right. 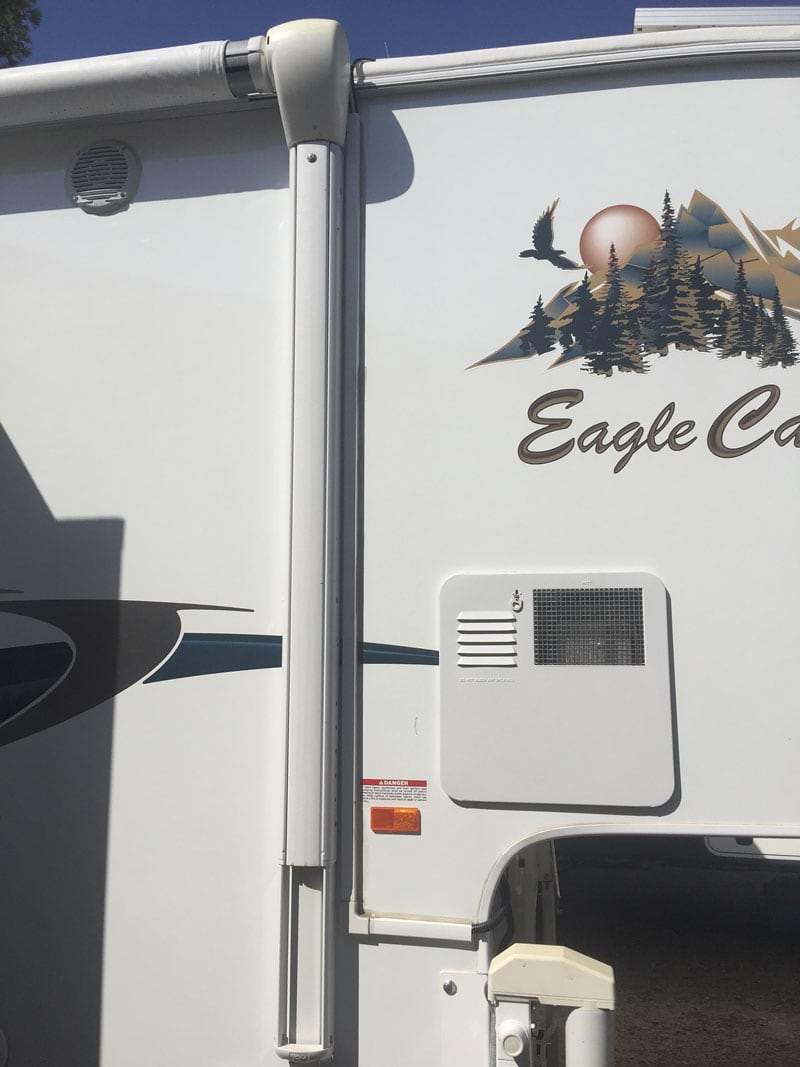 Then I installed a SiriusXM receiver on my dash because I didn’t want to open the dashboard to access the back of the stock radio.  However, the hardest part was feeding the audio into the stock radio.

For some unknown and unfathomable reason, newer radios are missing the auxiliary input jack.  Maybe that’s to save $2?  I had to purchase a Bluetooth adapter to feed the audio out of the receiver to the car radio. 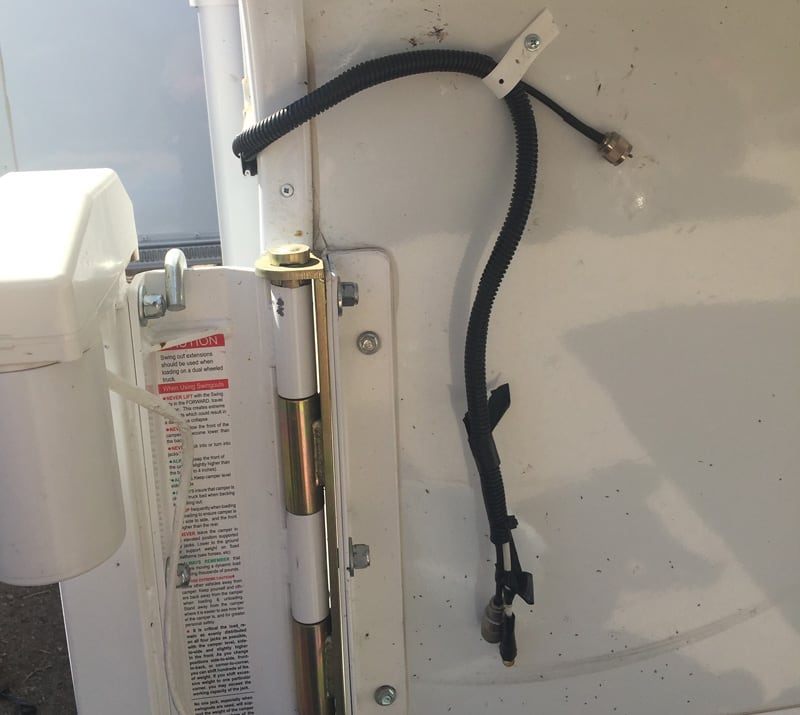 Above: Three antennas cables  routed to the front of the camper via Cordmate II cable track

At the front of the camper I terminated the cables in the appropriate cable connectors.  In the truck I fed my CB cable, my SiriusXM cable, and my cell phone booster cable to a spot located outside the passenger compartment of the cab.  So when I mount the camper, I just make the three antenna connections.

I used coax F connectors.  The upside is that I can take the receiver out of the car and put it in the camper.  Removing the SiriusXM receiver from the bracket and moving it to another vehicle or inside of the camper means that I do not need a second or third subscription.

“I installed a hood-mounted antenna and a SiriusXM docking station inside the truck.  The audio output from the Sirius radio is fed into the Aux input of the truck radio.  I do not use the factory SiriusXM radio.” – David Gladstone, 2016 Ford F350, 2008 Arctic Fox

“My F350 doesn’t have a separate SiriusXM module that I can get to and adapt a second antenna to.  The SiriusXM receiver is built into the Ford factory stereo and getting to the back of that dashboard takes an act of God or a small Army.

I called SiriusXM to see if they could be of any help and the first person I spoke with couldn’t find any answers (on his pre-configured help screens) so he pushed me up to the second level of support.  The gentleman who answered the phone became my small army.  His first words were, “First, you have to promise you did not get this from me”.  I said, “Okay” and we continued. 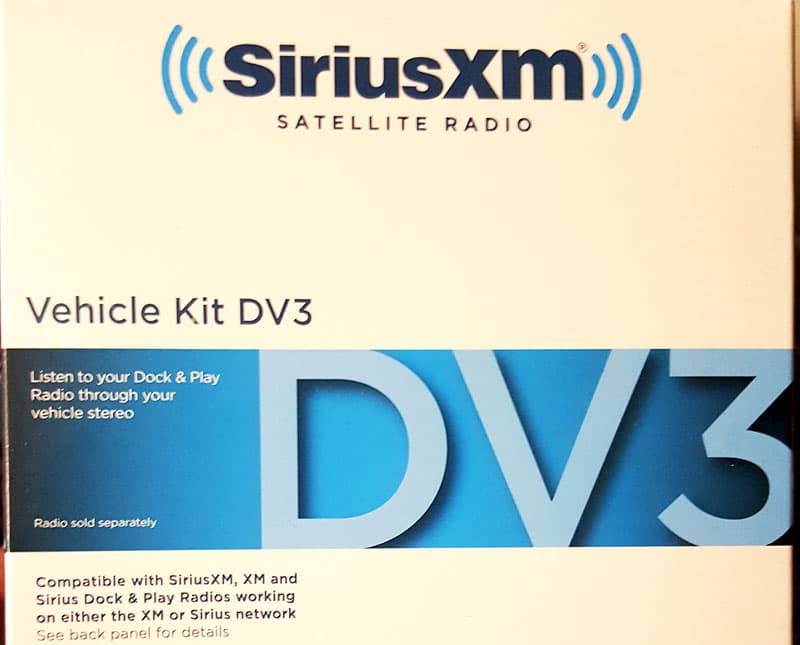 He said to get on Amazon and order a Sirius Stratus 7 Receiver Kit with Automotive Mounting Kit.  While I was on Amazon, I bought two additional mounting kits, as he suggested, without receivers – I’ll explain later.  They are very simple to install. 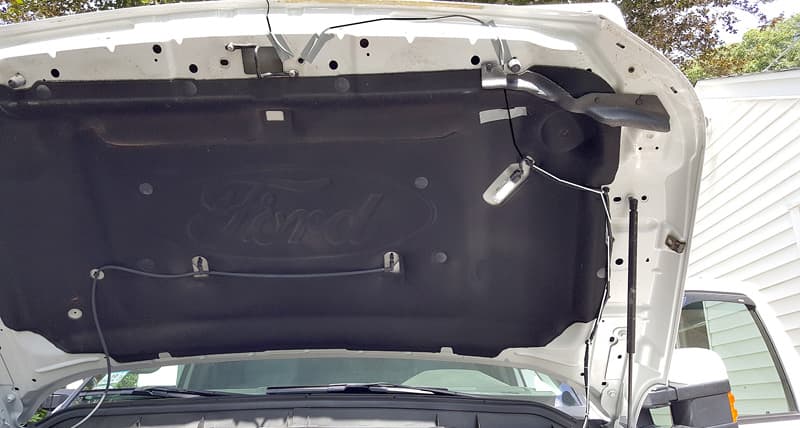 You mount the antenna out on the front of your hood and route the cable safely back into and through the firewall to your mounting point. 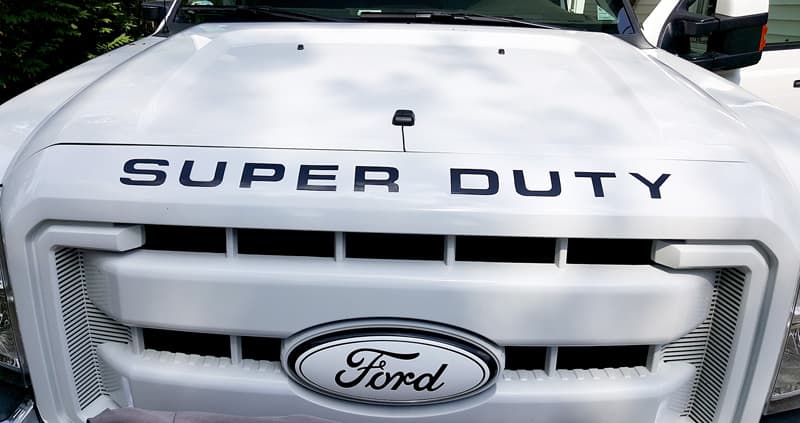 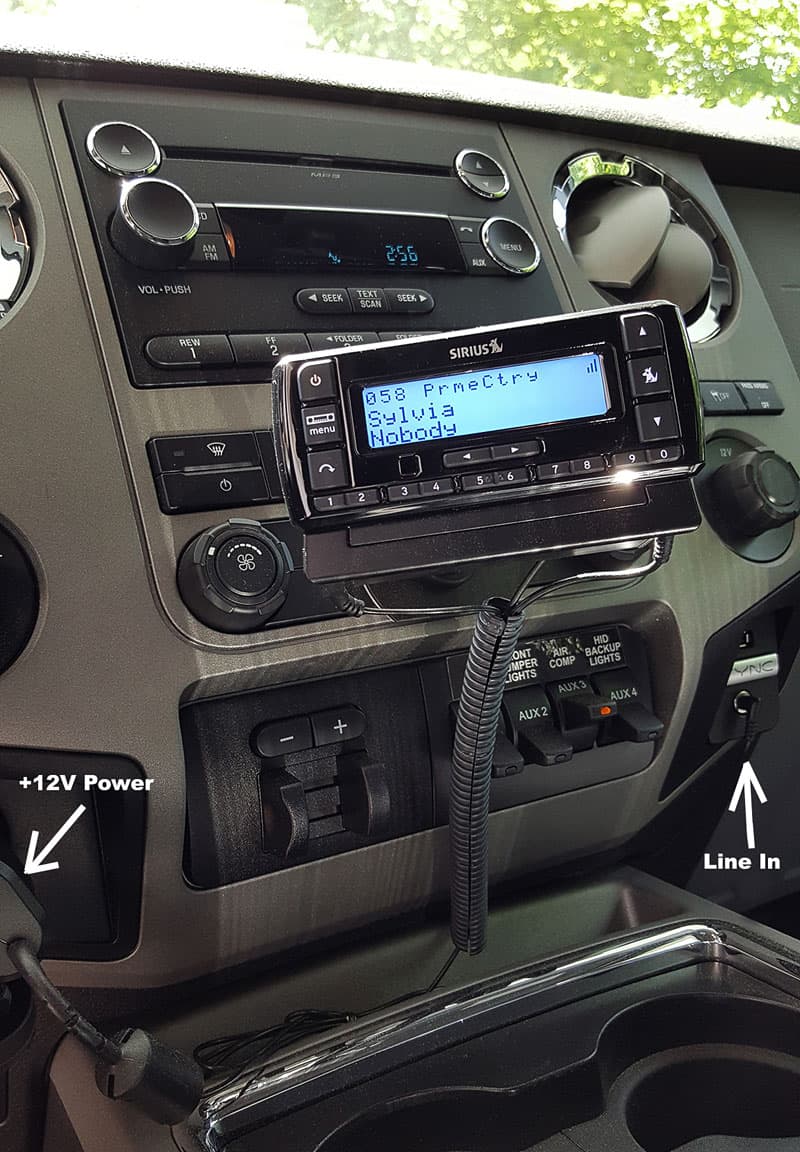 Find a convenient mounting point for the dock and get it mounted with the supplied Gorilla sticky backing. 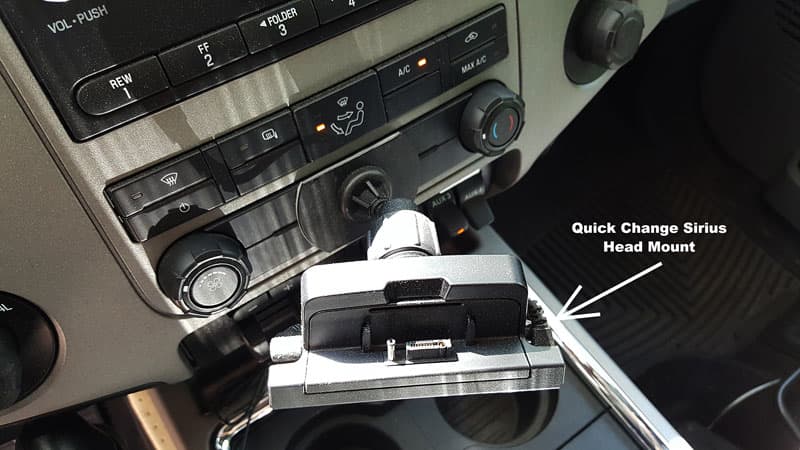 Once you are ready and can power up the radio, call SiriusXM and cancel the ESN of your F350’s radio.   Tell them you are transferring your subscription to a new receiver.   Once you are through, you can give them the new ESN of the Stratus 7 receiver.  Once the change is complete, you are up and running. 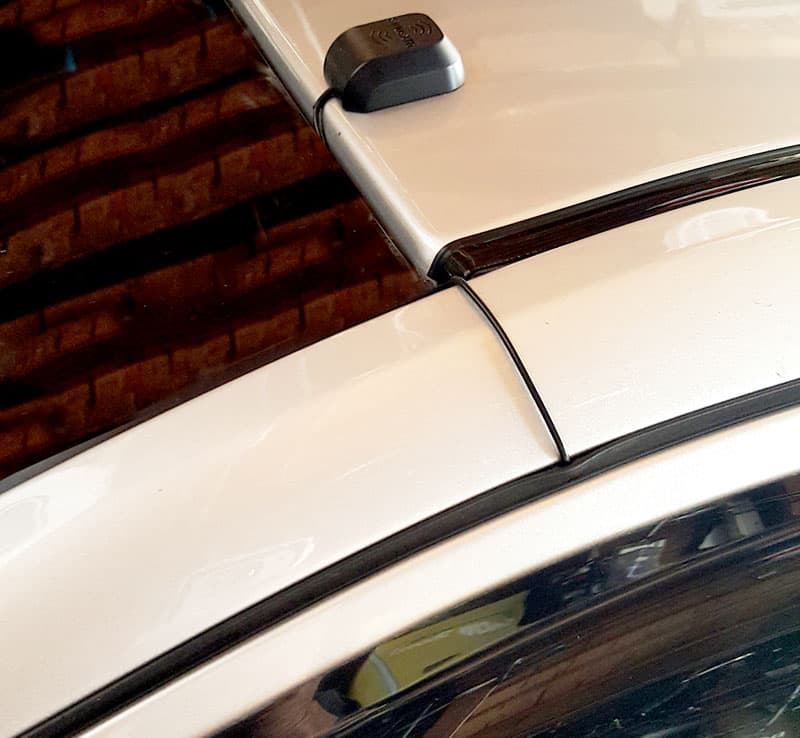 He asked, ”You said you had a car that your service ran out on?”.   I said, “Yes”.   He said, “Now you can install one of the additional mounting kits in your car and the other in your camper and have SiriusXM service in three vehicles for the price of one subscription”.   I mounted the second kit in our Ford Fusion which was also very easy.  I haven’t mounted the third kit in the camper yet and I’m not sure if we need it. 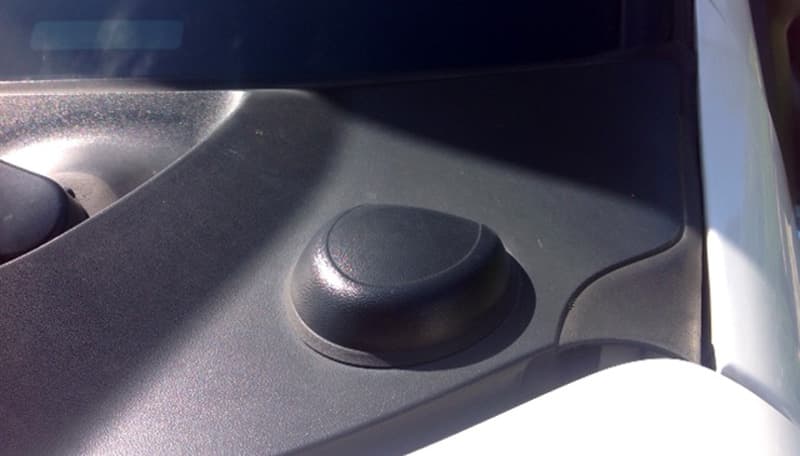 “We had the same problem that you had, but found that Ford has a solution available through their parts department.  Ford’s solution relocates the antenna onto the cowling on the driver’s side, just in front of the windshield.  The antenna part is FOMOCO DC3Z-10E893-A.

The only problem is, when driving northeast, there is still some radio signal blockage.  Otherwise, it works great and is an easy install.” – Nick Rukavina, 2015 Ford F350, 2015 Northstar Arrow 8.5

“Long ago I bought a XM Skyfi (if I remember the name right) which had its own subscription.  It receives the signal and rebroadcasts out to any FM radio.

I have an antenna mounted in my boat, truck camper, and a unit in the house that I move the Skyfi unit to and from.  It works great in the camper with the antenna on the hood like your truck.

As a bonus, with the Skyfi sitting on the dash, I receive good signals to the camper radio as well.  I point the remote through the camper’s sliding window and can change stations from the camper.  Some of these systems are getting too complicated, but we enjoy the satellite radio.” – Dave Miller, 2015 Ford F350, 2003 Bigfoot 10.6E 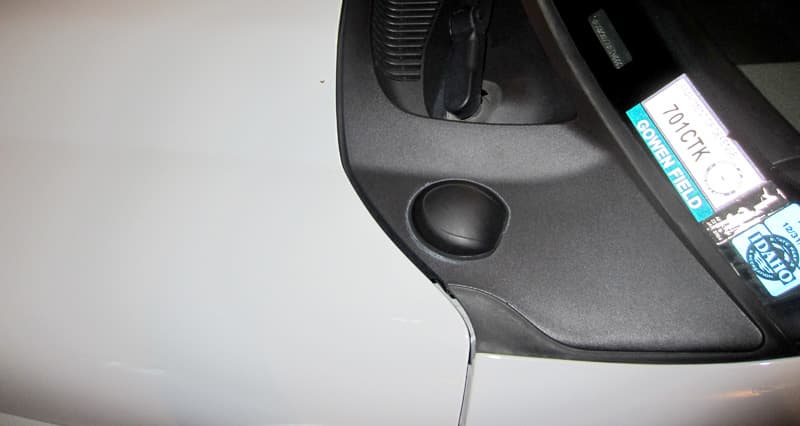 “My 2011 Ford F350 was factory equipped with GPS and SiriusXM radio.  With the camper on the truck, GPS signal was non-existent and Sirius marginal at best.

The truck was ordered with the Camper Special package, so I claimed it was a warranty issue.  I had to elevate it to the local dealer service manager, but I got it fixed under warranty.

They left the original antenna on the roof and put another on the far left side of the plastic cowl at the bottom of the windshield.  I’m not sure if they combined the two antennas or just connected the new one.  The parts used were all from Ford.” – Dave Erickson, 2011 Ford F350, 2006 Arctic Fox 990