The biggest challenge cited in the responses is simply fitting refrigerators through camper doorways.  For decades the truck camper industry has built their campers by placing the refrigerators into the unit before the sidewalls and doors are installed.

This week’s Question of the Week was, “Have you upgraded any of your major truck camper appliances for quality, reliability, and performance?”

“I replaced my original refrigerator with a Dometic CR1110 twelve-volt compressor refrigerator.  That model seems pretty popular with truck camper owners that swap out their refrigerators.

After three years of losing food and warm drinks with my compressor refrigerator when camping in hot temperatures, I made the swap.  Now I can keep the refrigerator temperature in the mid-thirties even when it’s a 100 degrees out.  Cool down time is less than an hour from start up.  There is no more buying ice and hauling around an extra ice chest.

Of course, with all good things comes a down side.  Compressor refrigerators use quite a bit of power so a solar setup is almost a must.  Enlarging your battery bank is also helpful.  If you boondock for days in a row without moving then a portable solar panel would come in handy or a generator.  If you travel during the day and boondock at overnight then it wouldn’t be an issue.

So far it has been the best move I have made.  Of course, in the process, I added 240-watts of solar and increased the battery bank to two Group 31 Lifetime AGM batteries.” – Henry Nelsen, 2007 Toyota Tundra, 2012 Northstar Liberty

“In 2013 I finally replaced my absorption refrigerator, a Norcold 300.3, after several failures including having the system rebuilt the year before.  I replaced it with a Dometic CR1110 12-volt compressor refrigerator.

I picked the Dometic CR1110 refrigerator for for these reasons.  One, I could get it through the camper’s door without having to dissemble the door and frame.  Two, it would fit into the existing cabinet cavity.  And three, it came with a built-in 120-volt AC to 12-volt DC converter.  I was able to buy it at a fairly local marine supply outlet.

Once installed, this refrigerator has proved itself.  It has been over off-road trips including The White Rim Trail in Canyonlands, The Mojave Road Trail, and – in 2015 -our summer journey which covered over 16,500 miles through Canada and Alaska.

It’s nice to reach in and pull out a cold drink when it’s over 100 degrees outside!

“I purchased an on demand water.  This was not a good solution for our camper because we need to conserve water.  For the short amount of time it runs, the on demand water heater can’t get the water hot enough.  For this reason, its better to have the standard propane water heater.” – Eugene Roth, 2007 Chevy, 2007 Alaskan 8.5 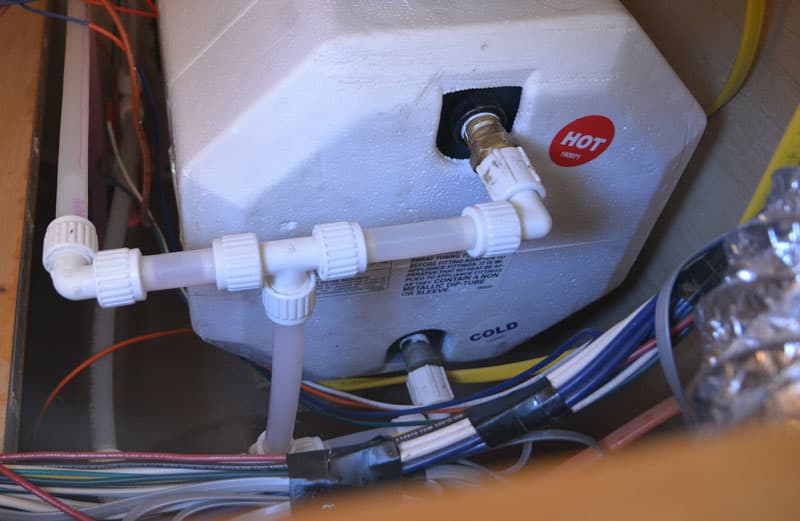 I’ve replaced the water pump in my truck camper twice and the water heater once.  The original water heater was still working, but I became concerned about its age.  I didn’t want to encounter backcountry problems.  I upgraded to a propane/electric water heater.  The cooktop, oven, and furnace are still originals and working.” – Bob Lick, 2003 Dodge 3500, 1993 Alpenlite 11-foot SK

“I added an electronic ignitor to the stove top so that I did not need to use matches or lighters to turn the flame on.  This was definitely a worthwhile upgrade.

The electronic ignitor is battery operated, and I am still on the initial battery from the installation three years ago.  The unit has two ignitors; one for each burner on my stove top.” – Bill Peters, 2017 Chevy Silverado 1500, 2013 Four Wheel Camper Hawk 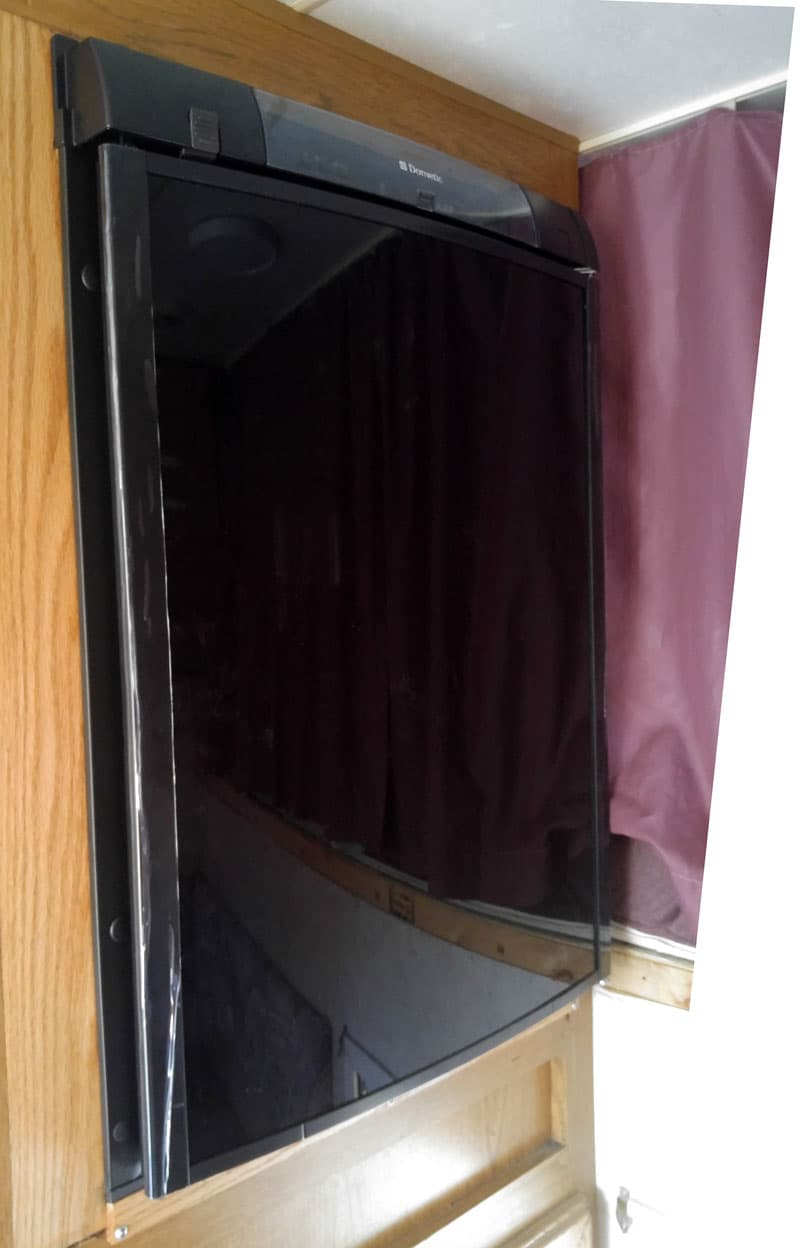 “I replaced the refrigerator in my truck camper.  It was not an easy task.  The old refrigerator was in great shape except the combination valve was leaking, so I opted to replace it.  Unfortunately, I could not find a direct replacement.

I went with a Dometic refrigerator.  To make a long story short, I had to rebuild the whole enclosure.  That was about thirty hours of work, but it came out looking perfect.” – Bill Harrington, 2004 Ford F350, 1997 K&Z

“We spend the majority of the winter in Idaho boondock skiing out of our camper.  A Camco Olympic 3 catalytic heater with a 6-foot hose now provides the majority of our heating needs and is turned on as soon as we reach our destination.  It provides steady, consistent warmth.

For the installation, we tied the propane line to the refrigerator and installed a quick connect bib inside the unit.  The 6-foot hose allows the heater to be moved into the bathroom where we have installed two hanging closet rods.  Soaked cloths from skiing, hunting or paddling dry completely in approximately four hours with the heater running.

Our record is three consecutive nights at approximately negative 20-degrees Fahrenheit.  The forced air heat is only used to “flash” warm the camper in the morning.  The Olympic 3 keeps it above freezing inside during the night and does not wake us up by cycling.  We crack a ceiling hatch and have a CO2 detector for safety reasons.

My wife reports, sleeping (under a puffy down duvet) is very warm.  Propane consumption is extremely minimal with no battery use.  This upgrade has made our winter camper use 100-percent more feasible.  We have upgraded to an Olympic 6 heater for winter 2017/18.  It should be like the tropics!” – JT More, 2004 Ford F250, S&S Ponderosa 8.5 SC

“Yes, we replaced the water pump in our truck camper.  Unfortunately, I don’t know the make of the new pump, but I do know that our options were a bit limited given the specifics of our camper.

Since we don’t camp in the winter, my husband mounted the pump to a piece of plywood and we remove it at the end of every season and store it in our nice warm, dry house for the winter.

We don’t have a water heater, and everything else is original in our camper.  I do worry about the refrigerator going, but not enough to replace anything proactively.” – Melissa Malejko, 2002 Chevy Silverado, 1981 Okanagan

“I had the refrigerator replaced in our truck camper about ten years ago.  The installer had to take the rear door off and take the door frame out to get refrigerator out.  Putting the new one in was lots of extra labor.  I hope the newer model campers have refrigerators that are easier to replace.” – Kelvin Kohanes, 2003 Ford 350, 1994 10-foot Caribou 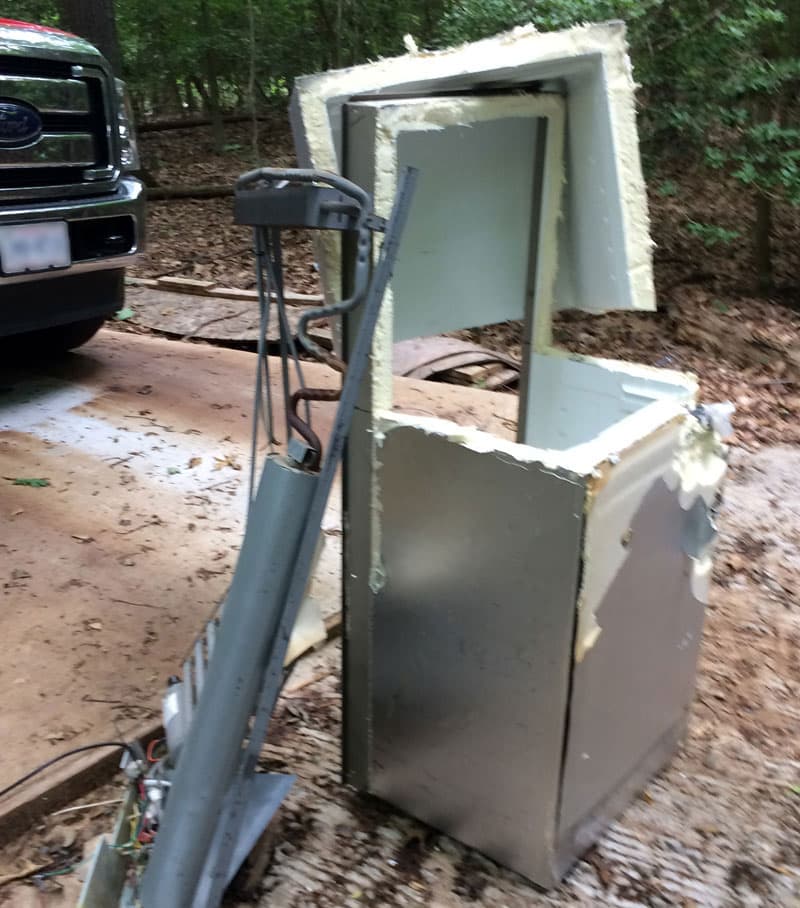 “I plan to install a new refrigerator in my Lance Camper in the early spring and have been researching my options.  The problem is that Lance puts a very nice full size Dometic refrigerator on a platform and builds a camper around it.

Dometic now has a new series of refrigerators that should help solve the problem.  The RML 8330 is just 16.5-inches wide so it will go in, but it is only 4.9 cubic feet.  That’s about the size kids have in their dorm rooms these days.

On the other hand, the RML8555 is 20.75-inches wide and 6.7 cubic feet so I will have take the door out to get it in.  That is at least a better option than cutting the camper in half and using duct tape to put it back together.

Maybe Lance has fixed this problem with the newer models.  Someone should tell them that sometimes the refrigerator does not last as long as the camper.” – Fred Patterson, 2013 Ford F350, 2002 Lance 1161

Home » Question Of The Week » Appliance Upgrades For Truck Campers