It all started Saturday during the Overland Expo.  Gordon and I hadn’t seen each other all day.  While we’re at RV Shows and Rallies, we tend to split up, one of us is taking pictures, and the other one of us is gathering story leads.  This day was no different.

We arrived back at the camper around 2:00pm and talked about what we saw and who we met while on opposite ends of the Expo.  That’s when Gordon told me about Mike Siminoff, an Alpenlite truck camper owner who went through the off-road course with Fred Monsees, a Land Rover off-road driving instructor.

During Gordon’s conversation with Fred and Mike, Fred suggested that we could take a few truck campers through the course as part of our Overland Expo coverage.  All weekend long we had watched Land Rovers, Range Rovers, and Jeeps tackle the overland course.

When Gordon shared the idea of taking truck campers on the course, I was thrilled.  I said, “Why don’t we take a Hallmark, Northstar, Four Wheel Camper, and a Phoenix Custom Camper through?  We could really show off the off-road capabilities of pop-up campers.”  Gordon enthusiastically agreed.

After lunch, we walked over to the Land Rover Overland Course and met Jim Swett, another Land Rover off-road driving instructor.  Jim also extended the invitation and asked us to be at the course with the truck camper rigs at 9:00am the next morning.  We thanked Jim for the opportunity and immediately went to ask the attending pop-up companies for permission to borrow their rigs.

Phoenix Custom Campers was very excited.  They told us that Larry Wittman, a Phoenix Custom Camper owner, would be tackling part of the course at 8:30am and we could video his experience.  Northstar wasn’t able to let us borrow a rig as the units they had on display were all sold.

Hallmark and Four Wheel Campers jumped at the opportunity saying, “Yes” and, “Here are they keys” all the while knowing that I could potentially tear up their rigs.  It was really quite astonishing at how they trusted me with their tricked out project campers.

We woke up early on Sunday morning so we could get the rigs and camera gear over to the course.  I went over to Four Wheel Campers to get the Toyota Tacoma and Four Wheel Camper Fleet.  Gordon went to Hallmark to get the Dodge Power Wagon and Hallmark Milner Extended Cab.

When I showed up, the whole Four Wheel Camper team was at their booth excited about the Tacoma and Fleet going on the course.  Tom Hanagan, President of Four Wheel Campers, was taking off the hitch step, washing the windshield, and removing items from the truck that could rattle.  Then we were off to the course.

When we got to the starting line, Andy Ward of Hallmark RV, and Gordon were already there with the Hallmark rig, along with a bunch of Truck Camper Magazine readers.  An audience!  Now I really had to do a good job.

Jim and Fred were there to take us through the course.  One would be in the truck with me giving me driving instructions, and the other would be outside as a spotter.

Since the Hallmark was parked in front, I was going to drive the first run through the course with the Power Wagon and Milner. 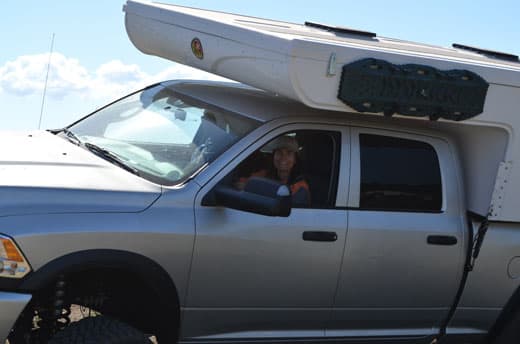 I had to literally jump up into the driver’s seat.  For this run, Jim rode in the passenger’s seat and Fred walked the course.  The first thing Jim did was make sure that we were in four wheel drive low.  Jim said that if we went five miles per hour, we would be going too fast. 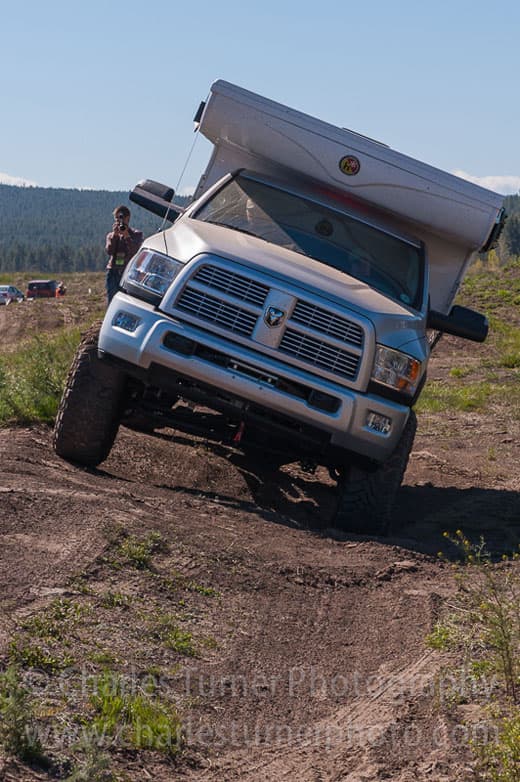 We began by going down the road and turning right onto the course.  On the left side was a little hill.  Jim said, “This is your warm up.  Go all the way to the left and go up the hill.”  The rig angled and we went up and down.  “Okay, I can do this,” I thought.

Up in front of me was the truck camper paparazzi.  Gordon was there with his video camera, Andy and Matt Ward from Hallmark were at different places on the course taking pictures, and about a dozen TCM readers followed.

As we were getting close to our first real obstacle Jim said, “I want your left foot on the brake and your right foot on the accelerator.  That way you have more control when you need to stop and go.”  Driving with both feet was somewhat natural to me as we have a manual transmission car at home.

The first big hill with the Power Wagon and Hallmark was an amazing experience.  All of a sudden I couldn’t see a thing but the top of the Dodge’s hood and the blue Arizona sky.  I didn’t know when the truck was going to hit the top of the hill or whether or not I was going to go too far to the left or the right.  Lucky for me, Fred was there to signal me forward.  That moment taught me the importance of having a spotter while you’re traveling in unfamiliar off-road territory. 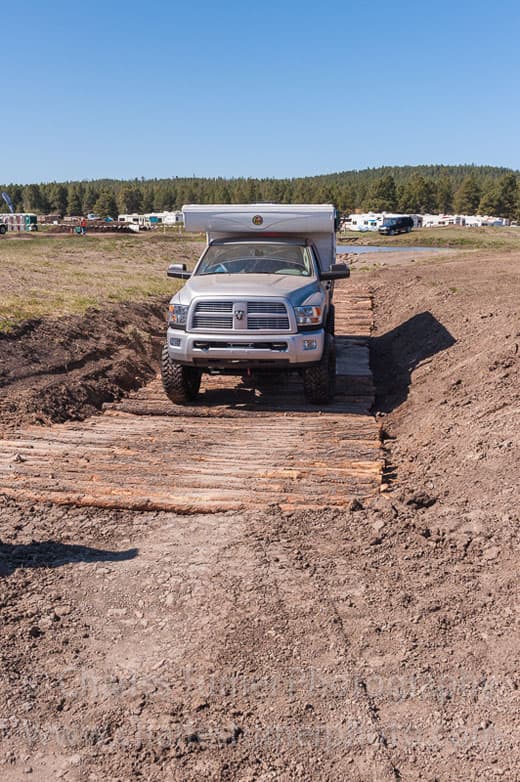 As we were going down hill, Jim had me put the truck into first gear.  He said, “You are going to keep your foot on the brake as you go down because neither one of us wants to drive into that lake.”  It all worked out beautifully.  Having Jim there giving me instructions and Fred checking the rig and where it was going, I felt totally at ease.

When Jim said, “Tap left or tap right”, I just moved the steering wheel a little left or right and the truck followed the course.  Everything was a small movement of the steering wheel, a slight acceleration, or slight braking.  No rash movements.  It’s just like loading a truck camper.  You start moving your wheel too much and it throws you off course.

In the middle of the course, Gordon spotted Larry Wittman in his Phoenix pop-up camper running a different part of the course.  He started the course around the same time the Hallmark started, so Gordon ran over to Larry’s rig to get some video.  Gordon literally had two video productions going on at the same time.

When Gordon was capturing Larry’s experience, we waited a few minutes to let some Land Rovers pass us on the course and then we continued. 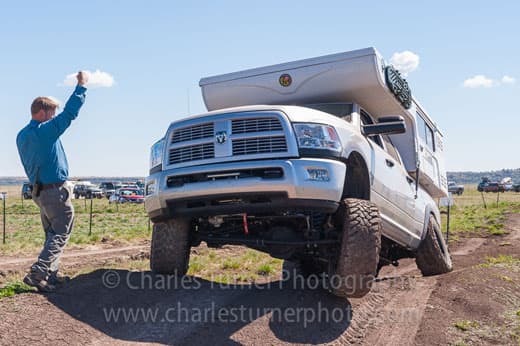 The last thrill was when the Power Wagon’s wheels lifted off the ground.  I literally felt like I was on a teeter totter back in elementary school.  The whole rig was swaying back and forth in the air.  What an incredible course!

As soon as we completed the course with the Power Wagon and Hallmark, I jumped out and got into the Tacoma and Fleet rig and buckled up.  One thing I noticed right away was that the Four Wheel Camper rig was a lot lower to the ground. 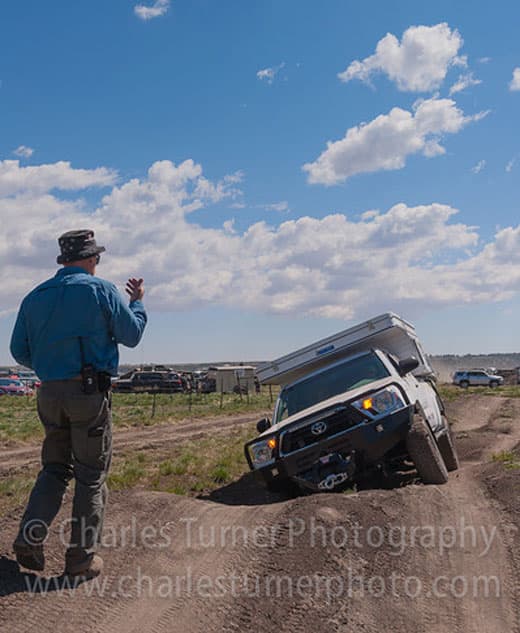 Jim and Fred switched places.  Fred was in the cab with me and Jim was outside giving me directions.  Fred was ready to go and started by showing me where four wheel drive low was located in the Tacoma. 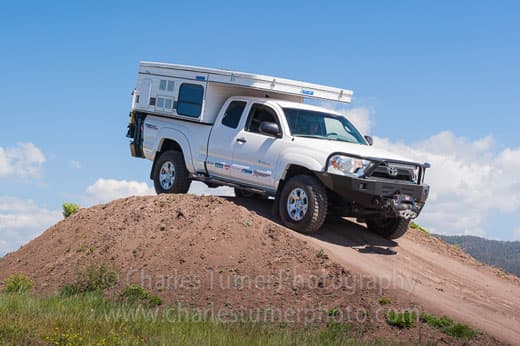 With the Tacoma being lower, I could see more of the course as I approached it.

One thing that sticks out with the Toyota Tacoma and Four Wheel Camper course run was the first really hard turn.  I made a U-turn all in one shot.  The Tacoma has a great turning radius. 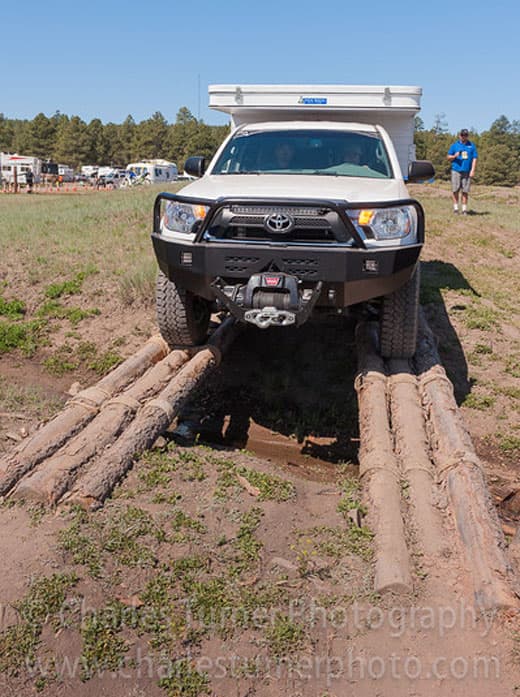 During my driving lesson, Fred pointed out that sometimes I cross my arms over each other when I turn the wheel.  He explained that, in off-road situations, I should never do that because you have a better handle on the wheel when your hands are at ten o’clock and two o’clock.  To demonstrate, he had me turn the wheel in those two different positions and then jiggled the wheel to show me that I had more control when my arms were straight. 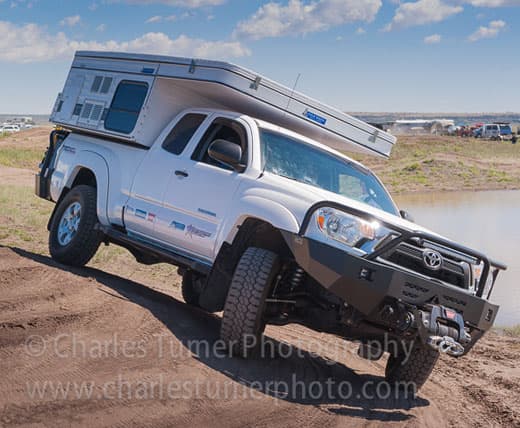 My favorite part of the course was when the rig was at an aggressive angle.  It was fun bring it sideways like that.  It was during one of these angles that I put my arm out the window.  Fred instantly told me to pull my arm inside the truck.  Fred said that I could crush my arm if the rig were to roll and my arm was outside the window.

The part that got the paparazzi going was at the end of the course when the Tacoma’s wheels lifted up off the ground.  Again, I felt like I was on that teeter totter from elementary school.  Way fun!

As the Overland Expo was coming to a close that afternoon, we got an urgent text from Cari Rowe, Co-Owner of Phoenix Custom Campers, that there was a last minute opportunity to run the course again, but we had to move fast.

By the time we arrived at the starting point, Robby Rowe was already there with his Bronco Bronco and heading towards the first turn. 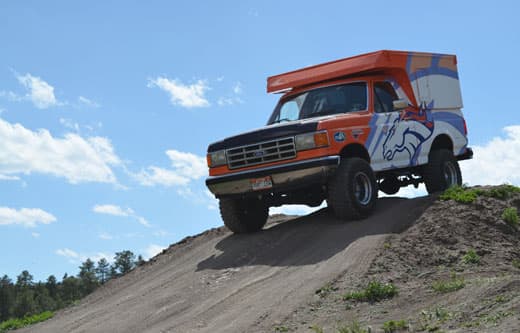 In the media business, the expression for moments like this is, “Run and gun”.  That means there’s no time for tripods, lighting, or setting up fancy shots.

All we could do was literally chase Robby around the course, and do our best to keep the images somewhat steady and in focus.  I was in hot pursuit, on foot this time, capturing the madness in photographs.

Robby was completely oblivious to our efforts as he was having the time of his life.  Every time I caught a glimpse of him he was smiling ear to ear. 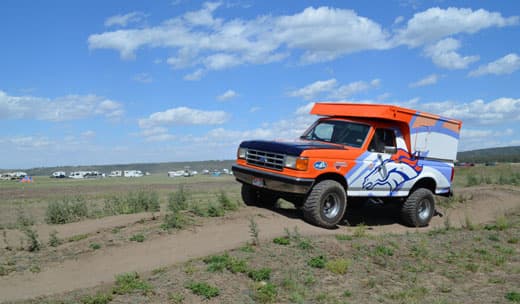 The Bronco Bronco looked at ease as it went over hills and bumps. 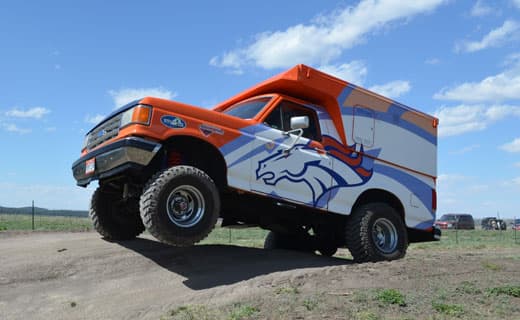 When Robby completed the course, all he could say was, “That was totally awesome!”  It seems that’s what everyone says after completing the Land Rover Overland Course.

What a great course the Land Rover team built.  There were differing degrees of difficulty and multiple types of obstacles that one could encounter on a four wheel drive road.  I, for one, had a huge adrenaline rush after driving the course and I can’t wait to tackle it again next year.

Thank you, Jim and Fred, for being great instructors and thank you for being so willing to let me drive the course.  We also want to credit and thank Chuck Turner, Chris Janeway, and Andy Ward for submitting photographs for this article.  Also, a big thanks goes to Hallmark and Four Wheel for letting me drive their rigs.

That was a blast!