Next time you use a remote controlled camper jack, imagine stabilizing a cannon and preparing to launch an explosive charge into a life-threatening snow bank.  Fire!

While many of us have fantasized that cannons would one day be installed on our truck campers, never in our lifetime did we believe something so amazing could actually happen.  Naturally, the cannon in question is not actually installed on a truck camper, and the jacks are used specifically to level the platform, but those are just details.  Besides, now that we have this technology, we have high hopes of blasting away from the comforts of our campers in the near future.  I can see it now, “Fire when ready Harley!”

Above: The Avalauncher in action this past winter

Getting back to something resembling reality, the cannon is real.  The Avalaucher cannon is designed to help the Alaska Department of Transportation control avalanches by firing explosive projectiles into heavy snow banks.  And we thought we had a cool job.

To learn more about the Avalauncher, and how the Rieco-Titan camper jacks are used, we contacted Wade Washke, Heavy Equipment Mechanic and fabricator for the Alaska Department of Transportation.  Here’s Wade in his own words on the Avalauncher: 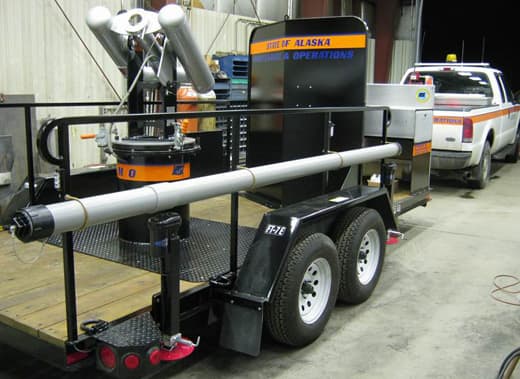 Above: The Falcon GT Avalauncher by the DOT in Alaska

This cannon launches a charge up to 2,000 yards from a twelve-foot long barrel.  The charge goes into a hillside, knocks the snow, and causes an avalanche.  After that, operators and equipment clean the snow off the road surfaces.  Skagway ADOT Maintenance crews just recently started using the new Avalauncher as it replaced our older avalanche cannon.

Above: The Avalauncher from the side and the back, and on the right is the aluminum front of the trailer

The Avalauncher trailer with the specialized Rieco-Titan system was chosen over hydraulic jacks because of their speed and quick set up.   Rieco-Titan custom built the jack length for the trailer and put special arctic grease in the gear boxes for our cold climate conditions.  We had a basic drawing and fabricated the trailer for what we needed on it.  We started with the bare trailer and fabricated the table, blast shield, rails, gun base, strobes, and the installation of the jacks with remote control.  The trailer was built at the ADOT State Equipment Fleet shop in Petersburg for Skagway ADOT Maintenance and operations. 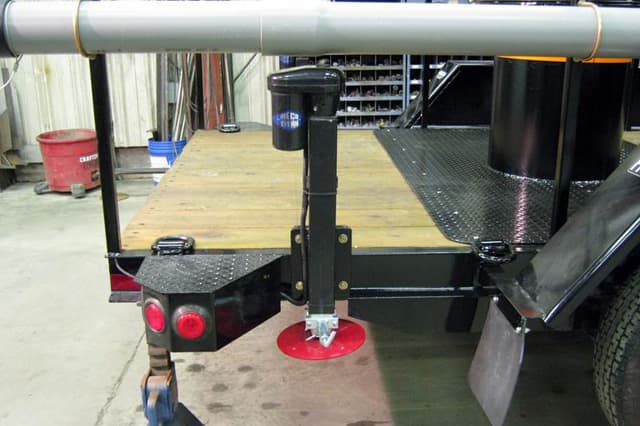 Above: The Rieco-Titan jacks with a ten inch drop and ten inches of travel

The jacks extend down and can lift the whole trailer up for leveling and trailer stabilization.

The camper jacks that Bob McCarthy of Rieco-Titan made for our application were cut way down and are shorter than what’s on a truck camper.  We can pull the pin to drop the leg down ten inches, plus the jacks have ten inches of travel. 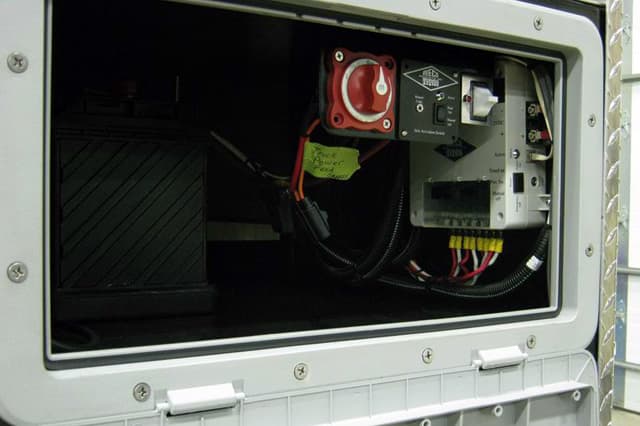 Above: Recognize the electric jack switch?  The Avalauncher has it, too.

We like the wireless remote on the jacks for fast lift and lowering and for running all the jacks up and down at once. 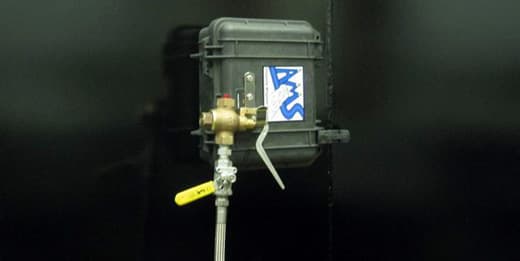 Above: The Avalauncher’s gun trigger holder

During the development of the Avalauncher, Wade and the Alaska Department of Transportation also worked with Hal Hartman, a private contractor from Colorado who specializes in avalanche gun training.  Hal has been in the business for forty years and is a physicist by nature.  Hal travels around the world and trains crews on how to safely and effectively use the guns to hit targets.  His training allows these crews to get to work quickly and safely without trial and error.”

“The Avalauncher is a precision device that needs to rest on a level and stable platform.  When you fire it, there is heavy recoil.  If the Avalauncher is sitting on a platform on the ground with tires in contact with the ground, there is a force transfer to spongy tires.  If it is spongy, you see a decrease in accuracy and you cannot repeat shots, which becomes expensive and compromises safety.

But, if the platform is level and stable, then crews like ADOT can sweep out a couple of dozen targets in a few target zones.  On their first go around, they had the platform leveled and firing in seven to eight minutes.  It was exceptional!

ADOT and the public moves along Klondike Highway throughout the winter months. For safety and commerce based revenue, it’s important that they have devices like the Avalauncher.”

Thank you Wade Washka and Hal Hartman for your expertise on the Avalauncher.