For 2016 Eagle Cap adds standard features, introduces new luxury touches, and turns on a sexy blue light.  Then they tease us with an all-new multi-slide dry bath model.

Imagine that you’ve been put in charge of a truck camper manufacturer.  Your task for the day is to decide what to change for the next model year of truck campers.

But seriously, there’s a lot more to deciding what should go into model year updates than what you think would be cool.  For example, your Purchasing Manager might say, “We need to change our hot water heaters because the manufacturer is about to discontinue the unit we’ve been using”.  So you update the hot water heaters.

Oh boy, here comes your Production Manager.  He doesn’t look happy.  “Well Bob, we’ve had more window supplier issues.  If I see that window truck pull in here again, I’m going to pour paint on myself, roll all over your car, and quit.”  If you didn’t love your 1971 Ford Pinto so much, you might let the window thing go.

Finally, after dotting a few hot water heater I’s, and crossing some potentially Pinto desecrating T’s, you gather your team to go over the wish lists.  You compare requests from dealers and customers, and lobby for ideas you believe will make next year’s models even more successful.  This is more or less how every truck camper manufacturer changes their products year-to-year.

And no, Eagle Cap is not about to introduce built-in electric nail clippers.

After making very significant Eagle Cap changes for 2015, Adventurer Manufacturing is taking a more conservative approach for 2016.  For next year’s model updates, Eagle Cap will have more standard features, and a short list of upgraded materials and luxury items.  That’s where the sexy blue light comes in, an industry first to be sure.

Last, but certainly not least, Eagle Cap tips its hat about an all-new multi-slide dry bath floor plan due out before the end of the year.  That’s right folks, Eagle Cap is up to something big and exciting.

To learn more about Eagle Cap’s 2016 announcements, and squeeze every bit of information about the new model, we talked to Greg Tucknies, National Sales Manager for Adventurer Manufacturing.

Above: The new ambient LED lighting in Eagle Cap Campers – click to enlarge

TCM: Let’s start with the ambient blue lighting.  What’s the story behind the new blue LED lights around the Fantastic Vent?

Greg: When we were designing a prototype last year, we were receiving requests for ambient lighting under the counter, or at the tow kick of the cabinetry.  We liked the idea of adding ambient lighting, but we needed an easier way to implement it for production.

At the time, the production team was working on a vent and suggested, “We could add a trim piece around the vent and put LED lighting around that.”  We took it a step further with a dedicated switch to turn the ambient light on and off.  The final result worked so well that we made ambient lighting a standard Eagle Cap feature for 2016.

TCM: Dare we ask how it became known as, “sexy blue lighting”?

Greg: Dealer representatives sometimes visit the factory for training.  During one such visit, we took the guys into a prototype with the new ambient lighting.  When we turned the switch on, we got “oohs” and “ahhs”.  They thought it was cool.  After that, the dealers nicknamed the new feature SBL, or sexy blue lighting.

Above: The simulated padded leather ceiling close-up – click to enlarge

TCM: You changed the floor and ceiling materials for 2016.  Tell us about the new materials.

Greg: For 2016, we are using a simulated padded leather ceiling.  It’s a vinyl laminate that looks like padded leather grain.  It’s a rich new look, and the material is much easier to clean than the Ozite fabric headliner we were using.  It also eliminates the Ozite ceiling in the shower area. 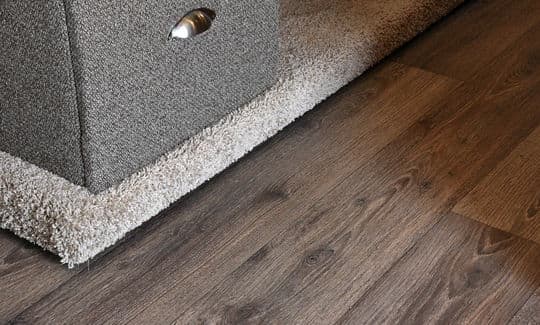 Above: The upgraded wood grain flooring – click to enlarge

Above: The new pull-out galley faucet in Eagle Cap Campers – click to enlarge

TCM: You also made a change to the kitchen faucet.

Greg: We now have a pull-out galley faucet for easier use and functionality.  We have discontinued the trash can and silverware tray because we found customers prefer to buy their own, and were not using the ones we provided. 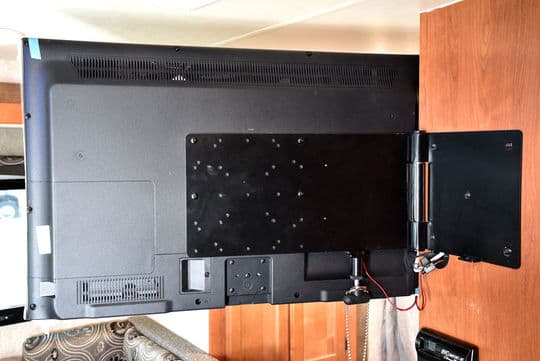 Above: A new hinged television bracket is now standard – click to enlarge

We are also discontinuing the iPod shelf by the stereo because the stereo now has Bluetooth.  With Bluetooth you don’t need to have a physical area to put an iPod or cell phone.  You can sync your phone to the Bluetooth and control your music from your phone.  Plus, a lot of people asked what that little shelf was for. 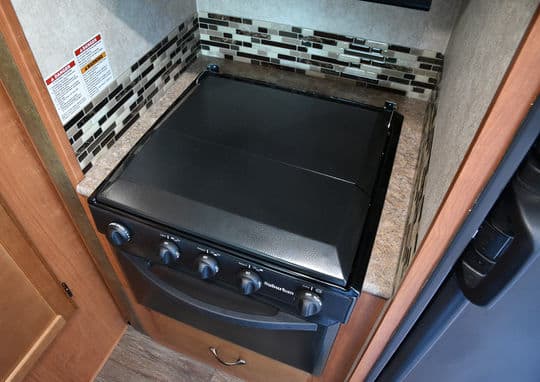 Above: The stove top covers are different for 2016.  The smart tile back splashes were part of the 2015 updates – click to enlarge

We made a lot of major changes in 2015, like the smart tile back splashes and the one piece molded counter tops.  For 2016 we are mostly making minor changes and refinements. 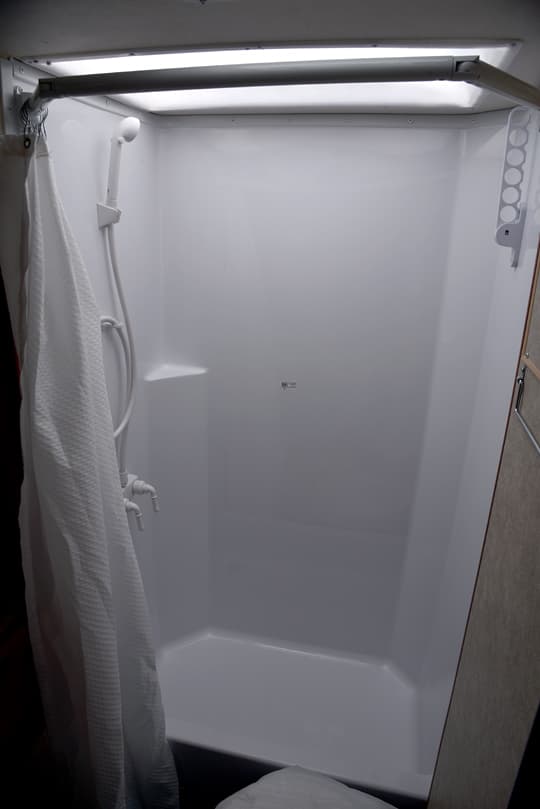 TCM: One change that is significant is the change to the 1165 shower stall.  Tell us about that. 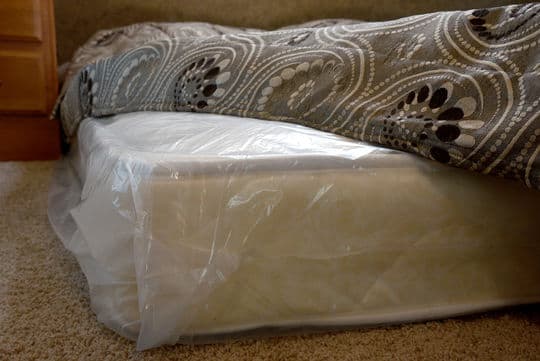 TCM: Has anything changed in the cabover?

Greg: Yes, we are.  The Wingard Rayzar HD interior mount HDTV antenna has been well received.  Customer and dealer comments have been very positive.  Everyone also likes the idea of not drilling holes to mount an antenna on the roof.

At RV shows this past winter, I was able to get reception inside metal buildings.  During football season, we could get local HD channels and put the play-offs on inside the campers on display.  The Wingard Rayzar HD is becoming known as the best RV antenna out there.  It’s what we’re installing in everything moving forward.

Above: The three fabric choices for 2016 are Infinity, Stone, and Pewter – click to enlarge

TCM: What interior fabric choices will consumers have for 2016 Eagle Cap models?

Greg: For 2016, the fabric choices are Infinity, Stone, and Pewter. 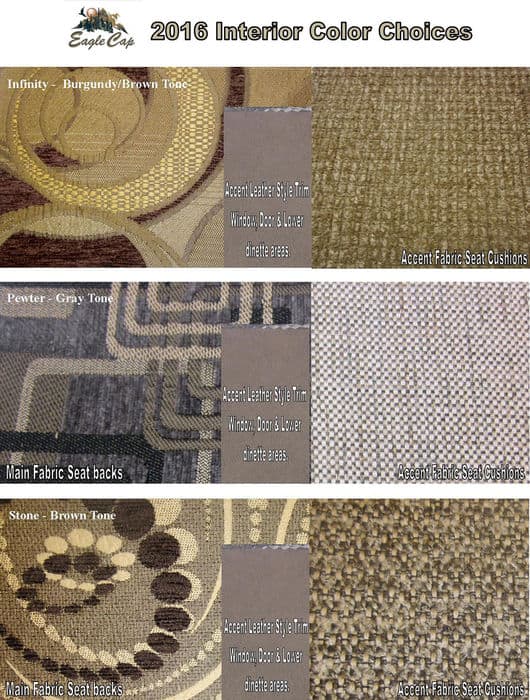 Above: The fabric choices in Eagle Cap Campers for 2016 – click to enlarge

As requested by customers, we got rid of the leaf patterns.  We wanted fresher looking fabrics. 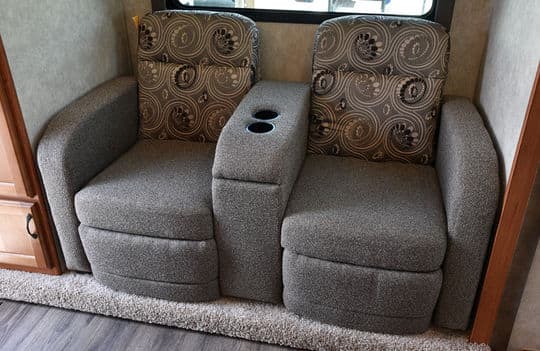 Above: Modular seating was introduced in 2015.  Here is the theater seating option in the Stone fabric choice – click to enlarge 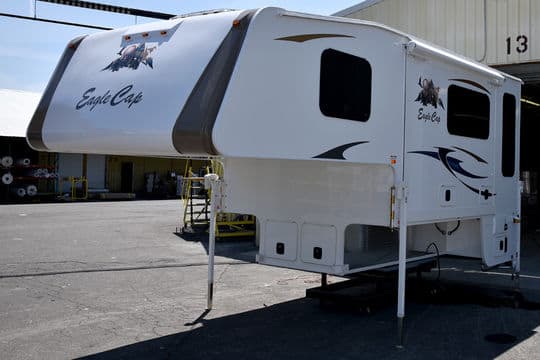 Above: The fiberglass front nose cap was introduced in 2015 and continues into 2016 – click to enlarge

TCM: Let’s move to the exterior of the Eagle Cap campers.  Last year you changed to a new fiberglass front nose cap.  How has that been received in the marketplace?

Greg: The front cap has been very well received from a production and consumer standpoint.  From the very first production run, the production team realized it was lighter and easier to install.

It is also easier to seal.  After we screw the nose cap into place, we cover the screws with 3M extreme seal.  This 3M products seals over the screw heads, holding them in tight.  It also protects the screws from moisture.  In all, we have four seals on the seam.

From the consumer standpoint, the two tone color has been well received.  The new cap is also better for aerodynamics.   We are very happy with it, and the perception is positive. 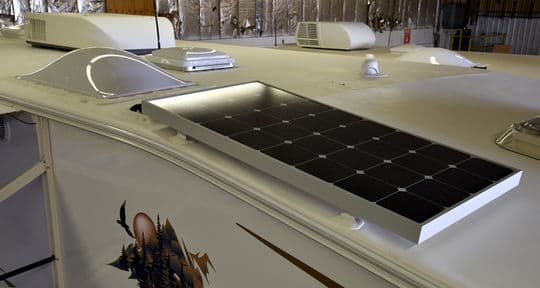 TCM: Why is Adventurer Manufacturing changing to Go Power for solar panel systems?

We weren’t real excited to change at first, and we were dragging our feet.  But, we found this installation to be quick and easy.  If a consumer wants to add another panel, there’s an easy connection, and it’s all plug and play.  It all runs on the same system.

We also have a heavier connection on the roof, and the pre-wiring is more complete.  Every camper features an area, shown with a decal, designated for the solar controller.  If you cut into that area, the solar controller pre-wire is right there.  The Go Power controller plugs in, and you’re ready to go.  It’s much easier.  It also saves dealers two hours for the install.

We negotiated with Go Power and got a discount.  The pre-wire kit costs us $27 more, but the solar panel is significantly less.  Overall, we were able to reduce the cost of the solar option by $60 for the customer. 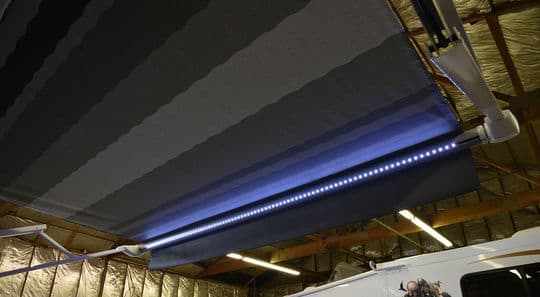 Greg: To extend-out or retract-in a power awning, all you have to do is push a switch.  Our double and triple slides have a side awning that is 10’8” long and 8-feet deep.  That’s lot of shade when you’re out camping.  Our other Eagle Cap models have the option for a rear 7-feet wide, 8-feet deep awning.

For 2016, there are LED lights at the end of the power awning which gives you additional ambient lighting under your awning when it’s extended.  It’s also a new cool look. 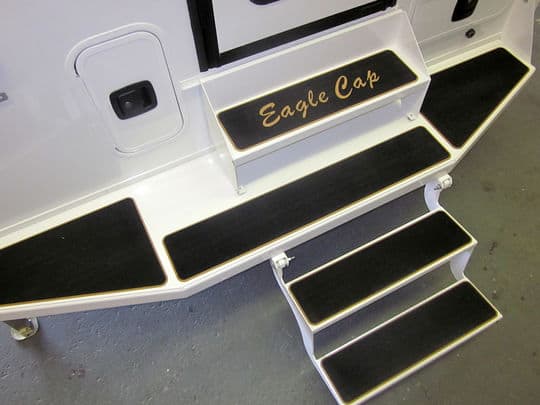 Above: The Seadek on the bumpers is now black – click to enlarge

TCM: Why are you changing the color of the Seadek on Eagle Cap bumpers to black?

Greg: The Seadek color on Adventurer and Eagle Cap bumpers has changed to black.  This helps to reduce discoloration and also reduces the additional cleaning required from asphalt foot traffic and normal use.

Discoloration happens more on dealer lots than with customer usage because of the asphalt foot traffic.  Everyone loves the look of the Seadek, but didn’t want the black from asphalt to show.  So, we reversed the colors, flipping the black and cocoa.  It’s still the look of decking, and we think the black looks richer, which surprised us.

TCM: Is there anything else that you’d like to add about 2016 Eagle Cap Campers?

Greg: Check out the “Build Your Own” section of our website.   You can choose a camper of your choosing and build it out, with the options you want.  At the end it will give you a dry weight, wet weight, and MSRP for your camper build.

Also, Eagle Cap experienced a huge growth last year, up 42% over the previous year.  We’re looking to expand with a new floor plan.

Greg: We are fine tuning the new floor plan now.  All I can say now is that it’s going to be an industry first.  It’s a new dry bath, side entry, multiple slide, floor plan.  We think it will be the 2015 truck camper of the year in Truck Camper Magazine.

TCM: And when will we get to see this all-new Eagle Cap?

For more information on the 2016 Eagle Cap Camper updates, visit their website at eaglecapcampers.com.