The day that you crack open the electron pages of Truck Camper Magazine and read, “Northern Lite Debuts Slide Out Truck Camper” will probably be the same day that Canada voluntarily becomes the fifty-first state.  In other words, it’s not going to happen.

So what can we expect from Northern Lite campers?  Continuous refinement of their clam shell molded fiberglass non-slide hard truck camper line.  That’s what they do, that’s what they believe in, and that’s that.  If you want to hear a Northern Lite rep say, “No”, ask them if they’re going to build a slide-out.  We always do, just for fun.

While the news may be far from shocking, Northern Lite is announcing a particularly exciting round of refinements for 2014 in the form of standard upgrades, some of them industry firsts.  To get the details on their 2014 changes, we talked to Keith Donkin, General Manager for Northern Lite. 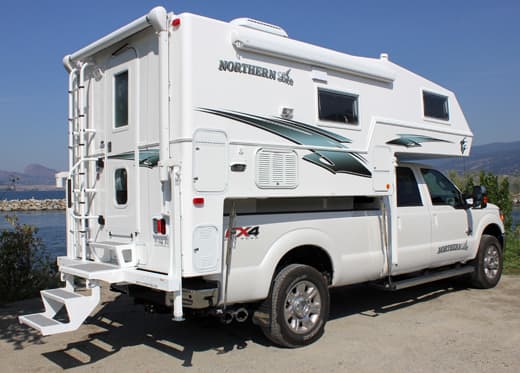 TCM: Are there any new model introductions or old model deletions for 2014?

Keith: There are no new models for 2014, but we are discontinuing the 8-5 Queen Classic and 9-6 Classic.  The introduction of the Sportsman models in 2011 almost immediately overtook those models in sales. 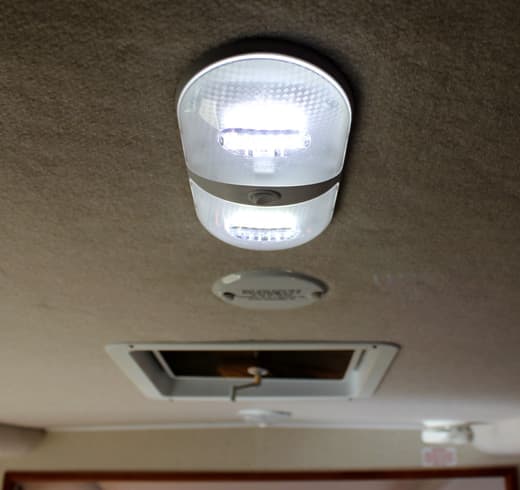 Above: LED interior lighting is standard for all Northern Lite truck campers in 2014

TCM: Are you making any changes to the LED lights themselves for 2014?

Keith: No.  We’re really happy with the light and temperature color of our LEDs.  We have also gone to an all-LED exterior taillight.  All-LED interior and exterior lighting is standard for all Northern Lites in 2014.

The only incandescent lighting on Northern Lites from this point forward are the range hood lights and the interior refrigerator lights.  Those changes are dictated by the appliance manufacturers, in this case Atwood and Dometic. 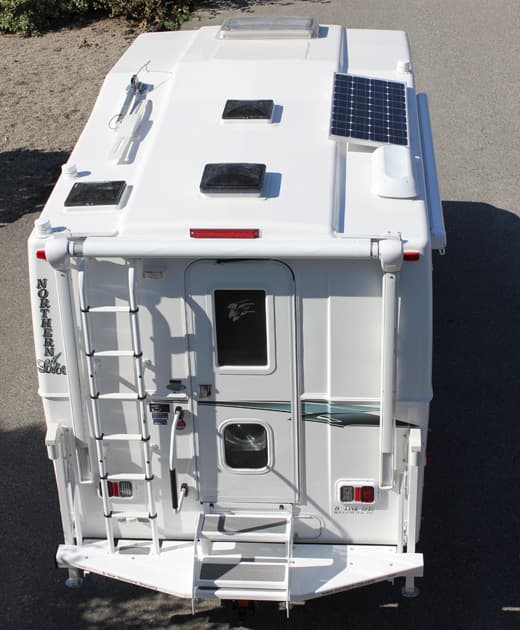 Above: 95-watt solar panels are standard on all Northern Lite truck campers for 2014

TCM: That’s incredible.  It wasn’t that long ago that adding solar to a truck camper was the exception.  By making solar standard, you’re making it the rule.  Just to be clear, even your smallest and least expensive truck camper, the 6-10 Lite, now comes standard with solar panels?

Keith: Yes.  Every single camper, the Lites, the Sportsmens, the Classics, and the Special Editions now come standard with 95-watt solar panel systems.

TCM: Tell us about the 95-watt solar panel and digital controller.  How did you select that panel wattage and controller?

Keith: We’ve been using 95 watt panels on our Australian export units.  It’s a size that works well on our molded fiberglass roofs.  The 95 watt panel is a good combination of output and size.  Most people only need the 95 watt panel, but we could add another 95 watt panel if a customer requested the upgrade. 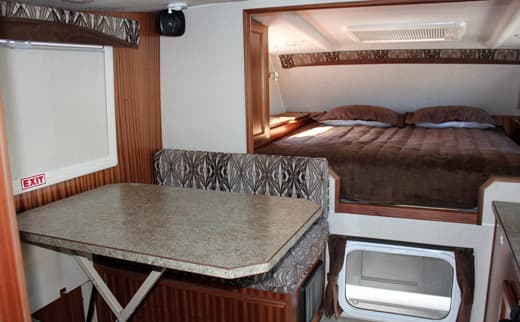 Above: New pillows and bedspread in Coffee Bean brown

TCM: We were very happy with our previous truck camper that featured a 95 watt solar panel, two Group 27 batteries, and all-LED lighting.  As long as we didn’t need the air conditioner or microwave, we were set with that combination, even with charging our laptops via 12-volt inverters all the time.

For 2014, Northern Lite is making bedspreads and shams standard.  Are these mostly ornamental, or are they intended for customer use?

Keith: The standard bedspreads and shams are mostly for RV shows and dealer lots, but they are usable.  They make the camper look better and could be useful should a Northern Lite owner want to sell their camper down the road.

Some customers use the factory bedspreads when they winterize to protect the mattress from dust and sunlight. 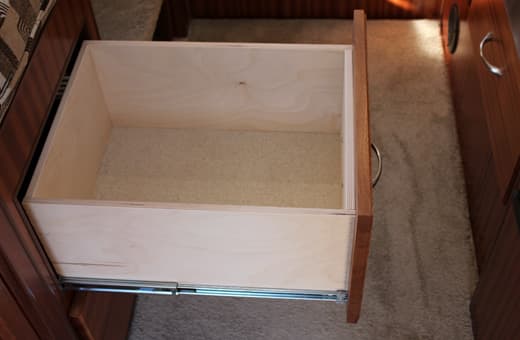 Above: Roller bearing guides are standard on all Northern Lite truck campers in 2014

Keith: It’s a new upgrade across the board.  We introduced roller bearing guides in all of our truck campers about a month ago.  It’s standard in every camper now.

The roller bearing guides are more expensive, but they are a definite improvement and give the customer a better tactile experience when opening and closing the drawers. 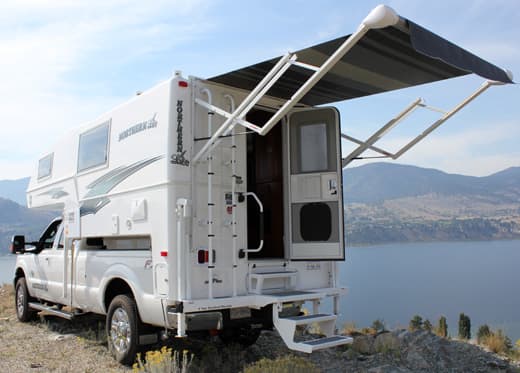 Above: The seven foot rear power awning is now standard on Special Editions

TCM: Northern Lite Special Editions will now come standard with a seven foot rear power awning.  Why was this an important feature to make standard for 2014?

Keith: Like the interior LED lighting, almost every Special Edition was being ordered with the previously optional seven-foot power awning.  When we see that a particular option is selected by our dealers and customers most of the time, we look to make that option a standard feature.

The electric rear awning is activated by a switch inside the rear door.  There are no arms or legs to be removed.  It simply extends and retracts at the push of a button. 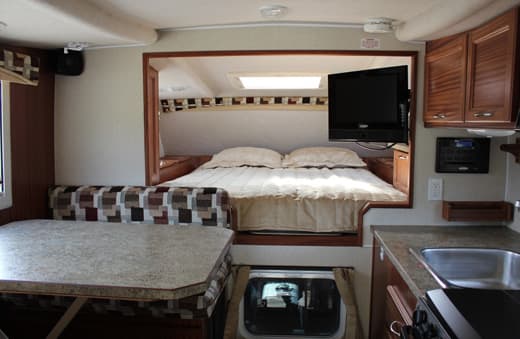 Above: The new pillows and bedspread in Sandstone decor

Keith: Yes, Sapele will be our standard interior for every model except for the 6-10 Lite and 8-5 Lite which will feature Oak.  The upgrade to Sapele includes our Classic and Sportsman models.  Customers can still order our other models in Oak, but it will be a factory order from now on. 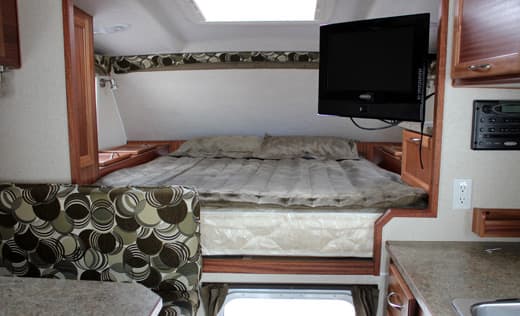 Above: The new coil spring mattress is standard in all campers except for the 6-10 Lite and 8-5 Lite

TCM: Tell us about the new standard coil spring mattress.

TCM: We were quite comfortable in the 9-6 Special Edition we reviewed last year.  For 2014, Northern Lite is increasing the fresh water tank size from 24 gallons to 33 gallons for 2014.  That’s a 37.5% increase in fresh water capacity.  Why was this change made?

For 2014, we found a larger tank and changed the under step drawer to accommodate the larger tank size.  It’s a nice upgrade in fresh water capacity, and one that we feel confident our customers will appreciate.  It is now standard in every model of 8-11 and 9-6Q Classics including our Sportsman and Special Editions. 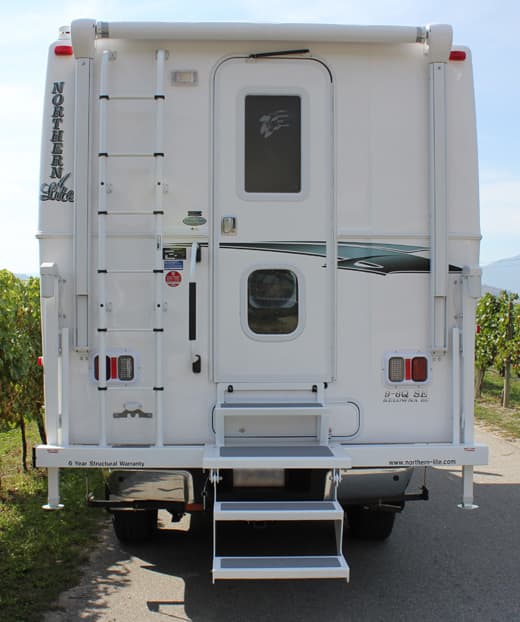 For towing, the new bumper step swings totally out of the way, clearing the bumper, and storing on top of the platform.  The step itself has non-skid tread on both sides so you can walk on it when it’s folded up. 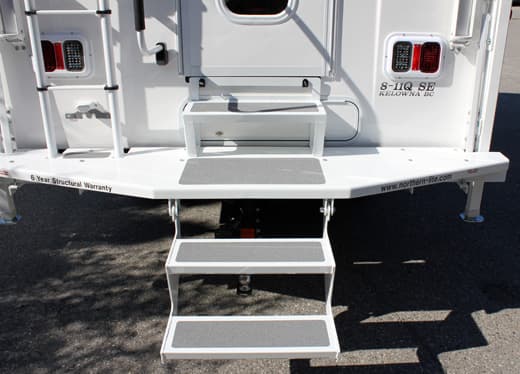 Above: A close-up of the new patio bumper and step system in the down position 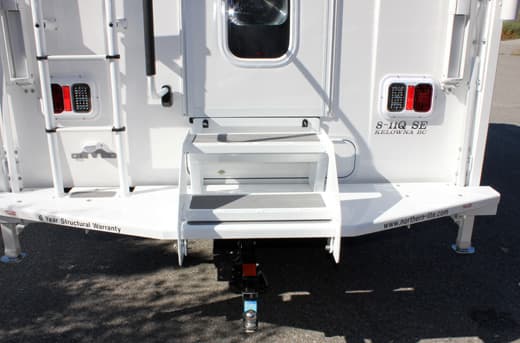 Above: The new patio bumper and step system in the up position

Keith: We will also have a rear bumper patio available as factory order option.

The new all-aluminum bumper step will be standard on all 2014 Northern Lite models except the Sportsman and Lite models.  For those models the new bumper step is an option. 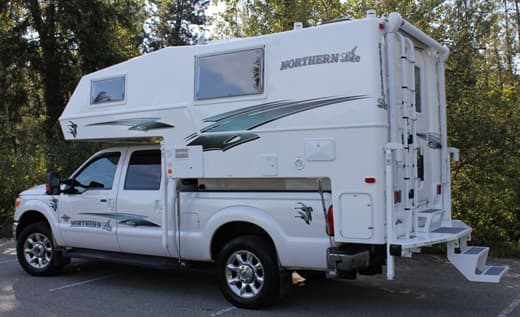 Above: Larger Dometic windows in the Northern Lite 8-11

TCM: More versatile and lighter weight all-aluminum step systems are becoming a significant trend in the truck camper marketplace.  What brought on the 2014 change to larger Dometic windows in the kitchen and bunk areas?

Keith: The 10-2 CD Special Edition already has larger Dometic windows in the kitchen and overcab.  Customer and dealer response to these windows has been very positive.

TCM: Did you need to change the fiberglass mold to make that change?

Keith: No, we weren’t limited by our molds.  When we first came out with campers that had the thermal pane Dometic windows, we went with the sizes that were available.  Now we can special order the windows to get the sizes we want.  All campers built after September first have had these new windows.

Above: Heki thermal pane cabover skylights are standard for 2014

Keith: Every model but the 6-10 Lite and 8-5 Lite will have the Midi Heki skylight as standard.

TCM: What is the Midi Heki?

Keith: It’s a slightly smaller Heki model that has some very important improvements over the larger models.  For one, the handles on the larger Heki models were prone to break if they were closed improperly.  The Midi Heki eliminated the handle that caused the problem and has a much more robust opening and closing mechanism.  The Midi Heki also comes standard with a pleated shade.

Above: The new 3D graphics for 2014 Northern Lite campers

TCM: Are there any other interior or exterior changes for 2014?

Keith: The counter tops and fabrics are the same for 2014.  We have improved the material and construction of our carpet kit for 2014, but it’s a minor change.  On the exterior, we are introducing new 3D graphics.  It looks pretty sharp.

TCM: Is there anything else we didn’t ask about your 2014 updates?

Keith: All Northern Lite campers built after September 1st will have the 2014 changes that I have shared in this article.

It’s been a busy year here at Northern Lite.  We’re very happy with our 2013 sales.  The United States economy is doing well and the strong Canadian economy continues.

For more information on Northern Lite, visit their website at www.northern-lite.com.